Nanotechnology: no money, no innovation 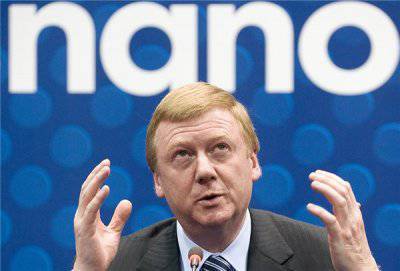 Recently, in our country, against the backdrop of statements by government officials about the start of a full-scale fight against corruption, a peculiar fashion has emerged. The fashion for identifying amounts, let's say softly, is not quite targeted spending of budget funds by one or another ministry or department. Ministry of Defense, Ministry of Agriculture, Roscosmos, Olympstroy, etc. And now in the role of this “so on” is such a Russian company with state management as Rosnano. The same company that was created more than five years ago and was supposed to literally gush forth with ideas and implemented projects regarding the development of high-tech industries with the release of competitive products.


Five years have passed, and now they have decided to pay attention to the activities of Rosnano. More precisely, attention was paid before, but this time they decided to also count the money that the company, led by the unsinkable reformer of all time, Anatoly Chubais, managed to “master”. The verification is just beginning, but its preliminary results are already known.

It turned out that over the years of its existence, Rosnano has mastered the “wrong direction” 21,8 billion rubles, of which about 3's billion are the costs of developing, creating and subsequently introducing in Russian schools Russian ultra-thin black-and-white tablet computers, option set of which meant working with text and graphic stationary images, but not working with video files ... There was a time when Anatoly Borisovich personally reported to Vladimir Putin about how Rosnano works efficiently, vlyayas with more than 100-billion-dollar funding, which the company comes from the state budget. This report looked like a demonstration to Vladimir Putin of a tablet developed in Rosnano.

And everything seems to be already tuned in that the Russian-made tablet computer will appear to the pupils of our schools, even black and white, even if without the video support function, even late, but still relatively inexpensive (the price is up to 12 thousand rubles) and , most importantly, your own, "homegrown." But ... As the weeks went by, the months passed, and the know-how presented by the head of Rosnano did not go to Russian schools. The reason turned out to be utterly banal: the final price of the “Rosnanovsky” compact computer turned out to be comparable to the price of the most expensive foreign analogues, one of which (Anatoly Borisovich himself uses a tablet from a well-known overseas company). True, foreign “analogs” are colored, they are connected to the Internet and they reproduce videos ... Therefore, the “Millennium Project” died out, and billions of budget funds turned out to be unknown where, and it is not known how to return them from there to the budget.

Another Rosnano project, which caused some confusion, was another 3 billionth (penny to penny) project for the production of silicon components for solar cells. Moreover, the company did not intend to take the designated three billion from its existing budget, but made a request for this amount to the Ministry of Finance. The project was named by Anatoly Chubais’s office as a priority, and therefore capable of ultimately producing an excellent profit, but only with the project came a real incident. It turned out that similar materials in their factories are already being manufactured by our Chinese neighbors, and the commissioning of the production capacities of the PRC cost much less. Moreover, in those years, while Rosnano was hatching the idea of ​​producing polycrystalline silicon, the world price for this material fell exactly 25 times (not without the help of all the same Chinese productions). Such information led to the fact that from the Ministry of Finance a refusal to allocate the designated billions came to Rosnano. However, the refusal of the Ministry of Finance did not upset the company's management, and Rosnano decided that the battle was not lost yet, and that solar panel plants based on that very polysilicon would soon start growing like mushrooms after rain.

Anyway, Anatoly Borisovich was not used to giving up after such failures. Well, lost, you understand a dozen or two billions from the state budget - it does not matter, they will give more, which means that projects will continue to appear. Moreover, in the case of the current work of Mr. Chubais, it is practically impossible to present any financial claims to him. Why? Yes, because the essence of the work "Rosnano" declared in the form of a company focused on the development of an innovative economy. And according to international standards, conducting such activities is fraught with serious risks. For example, the proposed innovative projects in the United States of America are implemented at best on 20-25. That is, 7-8 projects from 10 suffer a complete collapse and do not bring any benefit to the economy. So then we blame Anatoly Chubais? .. It seems that most of the projects are not being implemented in his company: recently the only development that Rosnano can boast of is the so-called “FemtoScan” - a scanning probe microscope that has found application in medicine. But, comparing the domestic "Rosnano" with foreign innovative companies, we should not forget about one important moment. The fact is that in the same United States the state, if it participates in the financing of developments implemented by such companies, the level of this financing is several times, if not ten times lower than the level of private investment. Moreover, in the overwhelming majority of cases, foreign companies receive a specific task, for the solution of which specialists are already attracted and funds are allocated. That is: the task has been set - please, seek its solution. But for the time being, everything is given to Rosnano itself: here is the 130 of the billion rubles of the budget for you, and do what you see fit: a tablet, so a tablet; dry closets, so dry closets. And is it really necessary for the Russian and world markets - the tenth question.
Naturally, this approach unleashes the "generals" of the company, which (the "generals") does not feel at least some kind of control over themselves. There is an opportunity to write off any failure on world statistics: they say that you point your finger at us, this happens to the whole world. Yes, it happens - no one argues, but only in the foreign version loses the private investor, who, after losing the investment in an innovative company, is unlikely to trust it for the second time. And in our case, the state loses money, that is, every Russian taxpayer. And after the next loss of funds for the “project that didn’t justify itself,” the financing of Rosnano from the state budget still continues on a solid scale - with the same rake again and again ...

Of course, this is not a reason to abandon the strategically important innovative projects. This is a reason to establish control over the activities of the company, which operates with colossal budget funds with minimal returns.
Naturally, someone (for example, Anatoly Borisovich himself) can say what kind of return you would expect if Rosnano has been operating for only 5 years. Just wait, they say, at least for years 20-25, then the implementation of innovative projects will increase significantly. However, if such a variant of the company's work continues, then you can wait at least 25, at least 125 for years, and the return will be the same: money is lost, understand and forgive ...

By the way, Mr. Chubais claims that the specified amount in 21,8 billion, it turns out, has not disappeared anywhere:

I want to draw the attention of those people who raised the topic with great enthusiasm, that we either stole 21 billion, or wrote off 21 billion, or threw away ... We didn’t steal, didn’t write off and didn’t throw it away. We have created reserves.

What are the reserves? For what purpose? If to translate into reality innovative projects, then with such solid reserves, it took Rosnano to ask 3 a billion rubles from the Ministry of Finance for the implementation of a polysilicon project ... the reserves have been accumulated ... It turns out that either the words about the reserves are another bluff, or these considerable funds are not at all needed for investing in innovation.

By the way, analyzing the words of Anatoly Borisovich that no one stole anything, wrote off or threw it away, we need to recall the following situation. Not so long ago, the head of Rosnano launched a cry in which he called for investing funds from pension funds into projects of the company he headed ... Like, why would the money lie on the accounts if you can start the implementation of the next project? However, I immediately recall the main, excuse me, “excuse” of Rosnano representatives about why not all projects work - statistics, they say. And if we are guided by world statistics, it turns out that when investing a billion or other from a pension fund in “nano-ideas”, at best, only 20% of funds will work. The rest of all statistical calculations will go down the drain. And that’s how the Pension Fund, which itself can’t patch the holes in short supply, will tell the retirees about why the funds have melted - that’s another question. It’s at least naive to expect that 100% of the “pension” money will give a positive return in Rosnano projects.

It is noteworthy that Rosnano does not care about the possibility of an inflow of private capital, but again directs its views on what lies closer to the state budget. Still would! Chastnika try to attract black-and-white tablet, and the state does not need to attract money - they will flow if you remove the last restrictive barriers ...

PS According to Rosnano, in 2012, the revenue of the so-called nanocenters amounted to 365 million rubles. What a sly, however, report. The trick is that the concept of revenue is significantly different from the concept of profit. Profit is revenue minus expenses. And what is the annual profit of the centers controlled by Rosnano, if only the monthly salary of the head of the company itself is estimated at 2 million rubles, and the average salary of hundreds of Rosnano employees is about 300 thousand rubles? And is this profit at all? It would have been - the company "Rosnano" would have long trumpeted about this at all angles ...