"316" in the foothills of the Salang. Soviet tankers in Afghanistan

April 24 2013
19
In order to paralyze life in the country, it is enough to cut communications. To prevent this from happening, strongholds were established along the vital highways of Afghanistan - they stood in the way of the rebels, bringing death to the roads. From October 1983 to April 1985, the commander tank T-62 with hull number 316, Sergeant Nikolai Lyabin served at one of these strongholds of the Khairaton-Kabul road. Which of the “Afghans” drivers have not heard of the Chirikar greenback? Her fame is notorious - shellings are here, attacks on convoys of vehicles were carried out especially often. 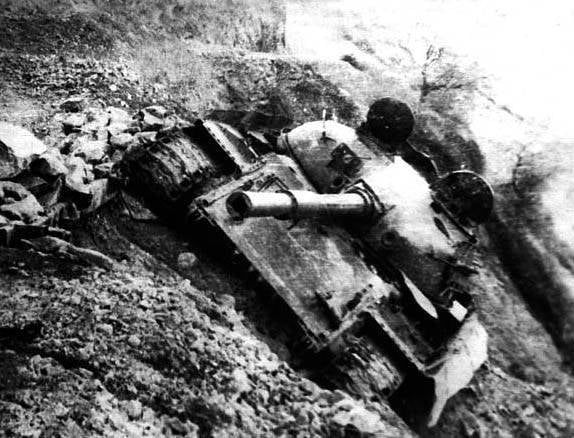 T-62 at the checkpoint was subjected to a raid by the rebels. The tank has minor damage. The Republic of Afghanistan, the province of Parvan is the administrative center of Charikar, 1985 year (photo from the archive of the Duty club, Moscow)

The crew mastered military specialties in one of the training units of the tank forces, located in the Turkestan Military District, which trained specialists for a limited contingent of Soviet troops in Afghanistan.

War ... From the side, it seems like an uninterrupted chain of battles and victories, feats and losses. But in fact, the main feeling of war from the inside is hard work, exhausting with its monotony. Is the fifty-degree heat worth when the armor is like an oven wall, or does the tank fill the moist air of the slushy winter from which the overalls get wet, but every morning for a year and a half the crew took out their 316 from the stronghold and moved to the position on the highway - caponier dug on the sidelines.

Having approached it, the commander was in no hurry to put a tank there, but he took a metal rod-pin and began to carefully check: is there a mine here? Mines are now made in a plastic casing. Therefore, they cannot be detected by an ordinary mine detector. So we had to act by the antediluvian method of "scientific spear" in order to find the "Italians" - mines of Italian production. Mines could be delivered at night, because after passing the last column the tank returns from duty on the road to a strong point, and the caponier remains homeless.

One day, one of Sergeant Lyabin’s comrades-in-arms, having approached the caponier, jumped off to the ground. And immediately a strong explosion was heard - the friends could no longer help him ... After that, tankers without sappers were forbidden to inspect the caponiers themselves. But you will not carry sappers with you every time, the tank from the subunit that carried the escort drove into the caponier without being examined and was blown up. The other tank, which came to the rescue, began to pull out the injured, when suddenly another explosion occurred - the explosive device was set up so that the explosion would take place both at the entrance of the tank to the caponier and at the exit. Seriously wounded as a result were the company commander and tank commander. Mine warfare is one of the bitter routine of the life of tankers. 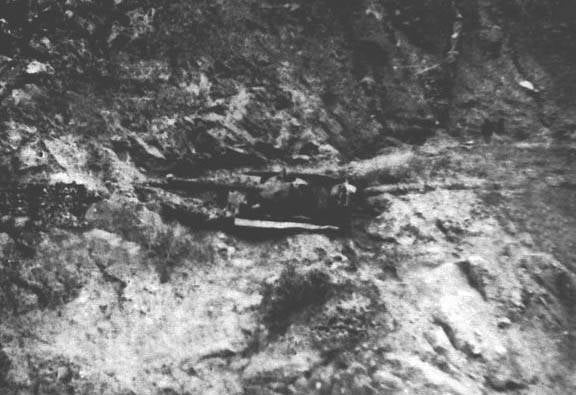 T-62, hanging over a precipice in the mountains near Faizabad. Republic of Afghanistan, Badakhshan Province, 1985 year. The picture was taken from the side of the helicopter (photo from the archive of the club "Debt", Moscow)

After inspecting the caponier, the crew of the 316 brought a tank into it and aimed the barrel at the “brilliant green” - the bushes adjacent to the road.

Throughout the war, our warriors and the formation of anti-government rebels, “spirits,” as they were called, studied each other’s tactics. And here, in the foothills of the Salang, the tank crews have perfectly studied the possible actions of the enemy. If our convoy is coming - wait for the shelling, if the Afghan is - seizing and stealing a car. Our drivers are moving along the road tightly, without breaking the column. Afghan ones are often divided, so the “spirit” entrenched somewhere along the road can suddenly turn up on a car’s footboard on a bend or turn, so that at the first opportunity, turn off the road into a “green” and benefit from the captured cargo.

The 62 T-316 with the tail number stood near such a path leading from the highway to the Zelenka, and was like a bone in the opponent's throat. It would seem - what is driving a car fifty meters (that is how much separated thickets from the highway), where the hijacker could already feel safe. But the crew of the tank had such training, such coherence in the work, that stopped such attempts literally with the first shot. Once for several months, tankers thwarted attempts to profit from the good of the road. And they did it so skillfully, so persistently, leaving no “chance” to the “spirits” that they literally begged - they sent an envoy with an offer of good “baksheesh” for the “customs to do good”. So that the tankers would not do anything special - they simply would have “missed”! Having received a categorical refusal, the "spirits" promised by all means to revenge the crew. And, perhaps, the will of the case, and perhaps, really fulfilled its threat, but soon the tank hit a mine ...

Driving along the bridge, the tank mechanic took the truck slightly to the right, passing a truck moving towards, “caught” a mine with its right caterpillar. The left caterpillar continued to rotate regularly, turning the tank to the right until it fell off the bridge with the barrel down. In the breech of the gun was already a shell - there was an explosion. What a miracle the whole ammunition, consisting of several dozen shells, did not detonate from the explosion, which very often happens, only the Lord God knows! Otherwise, only memories would remain about the tank and its crew ... By chance, everything went without a tragic outcome. The tank commander received a concussion, the loader was slightly wounded. And the driver got off easy.

The country sent 18 – 19-year-olds to the war, and how much in their deeds, along with the manifestation of courage, was childishness! So Sergeant Lyabin, having received a concussion, refused to go to the hospital, fearing that after treatment he might be sent for further service in another part. Of course, friendship, bonded with fire, is an incomparable military partnership - can this be scattered? Having rest up, the commander returned to the crew and continued to do military work. 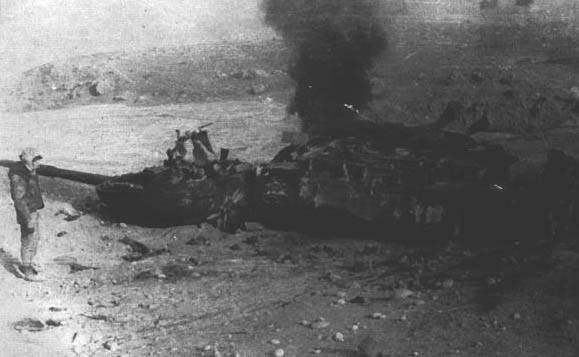 Soviet tank T-62, shot down in battle with a direct hit from a grenade launcher. The Republic of Afghanistan, the province of Parvan is the administrative center of Charikar, 1985 year (photo from the archive of the Duty club, Moscow, Moscow)

One day, from a column of Afghan cars passing along a highway, suddenly a truck with a trailer was turned in the direction of "Zelenka". From the first shot the tank crews set it on fire. It turned out that the "spirits" were trying to steer the car with spark plugs for cars - the cargo for Afghanistan was almost priceless. Our guys felt sorry for such a load, and two tankers under fire from the enemy brought a tug to the trailer, and their commander covered them with a large-caliber DShK machine gun. I must say that, while behind the armor, tankers feel confident. The same machine gun is mounted on the turret, out of protection, and when you fire from it, you can hear the enemy bullets screaming, reflected by the turret ... For this episode, the crew of the tank was presented with government awards.

Short fight. But what is retold in a few words, can last real minutes in real time. All this is because the direct participants in the battle can not notice the little things, individual episodes, because they are busy. And everything flies by as one moment, this is called the “battle fever”. Imagine the limited space of the tank, the smoke in the turret from the work of the gun, the roar of shots, the roar of the engine, radio communications, perfected to the automatic movement of crew members ... After one of the battles, where after a massive attack, the rebels still managed to set fire to four Ural cars in a passing in the Salanga column, the sergeant only after the battle noticed that two grenades fired from a grenade launcher were hit at once in their tank. In such skill, one could feel the handwriting of mercenaries or foreign instructors with whom the tank crew already had to face.

In one of the “combat” exits, which was carried out not far from the notorious Panjshir Valley, all triplexes — observation devices — were disabled during the battle. Well-trained snipers tried to leave the tanks without "eyes". Oh, and the ensign, who is responsible for the material support of the tanks, cursed after returning to the base! By the way, when entering combat operations, tankers usually, perhaps from superstition, covered the tank numbers with nets - so that the "spirits" would not know their particular offender. Lyabin’s crew neglected this tradition - they never hid their 316 board number. Not afraid of death? No, of course, they were afraid, but they respected their professionalism and thus demonstrated self-confidence.

And death ... It is impossible, after all, to learn to perceive it in an ordinary way, especially when it concerns the closest friends. Sergeant Lyabin was of the same call with Sergey Shatsky, both were tank commanders carrying escort at outposts. One evening, after returning from the road to a strong point, they started a “demobilization” conversation at dinner - about the imminent dismissal, about how soon they would live at home ... And suddenly Sergei asked "if anything happens" to go to his parents, the girl who waited for him. Asked unexpectedly, as if something had a presentiment. At night, the tankmen were alarmed and ambushed - to block the bridge, on which they saw movement in night vision devices. Sergey was on patrol of the unit that was ambushed, and 316 received an order to cover the squad with a machine gun, settling down at the commanding altitude.

At three o'clock in the morning, an exchange of fire broke out on the bridge, and 316 began firing at the intended sector, cutting off the paths of retreat for the spirits. Soon, the skirmish subsided, and immediately the tanks sent there returned with the soldiers on armor. The soldiers dismally dispersed among the strongholds, pulling equipment off their feet, not asking anyone to smoke, without exchanging the words ... "Who?" Seemed to be a question in the air. It turned out - Sergey ... He walked in front of the group and, when the bridge was passed, Sergey left the young, unstarted fighter and decided to explore the area himself. He and the "spirits" noticed each other at the same time, at the same time they threw up their automata ... The human psyche is arranged in such a way that it cannot last for a long time in extreme tension. There was a need for detente - and the guys tried to find it in everything that was going on around good, they joked about each other for any reason, but, of course, the most important were two days a week, when the “postal” armored personnel carrier delivered letters from home.

... War will remain forever in them. And not only by the bitterness of losses, by the pain of past contusions and wounds, infectious oriental diseases. There is something in them that it is still not clear who was not in that war, which was raging at a time when the whole country, then a single power, lived a peaceful life. 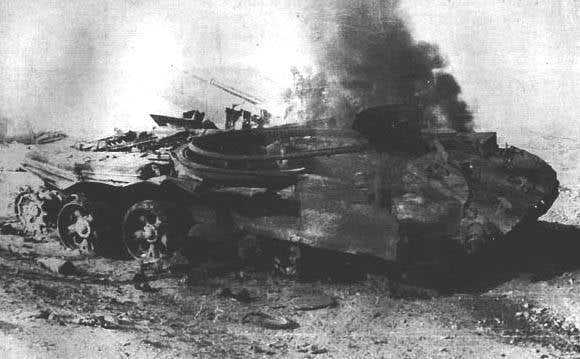 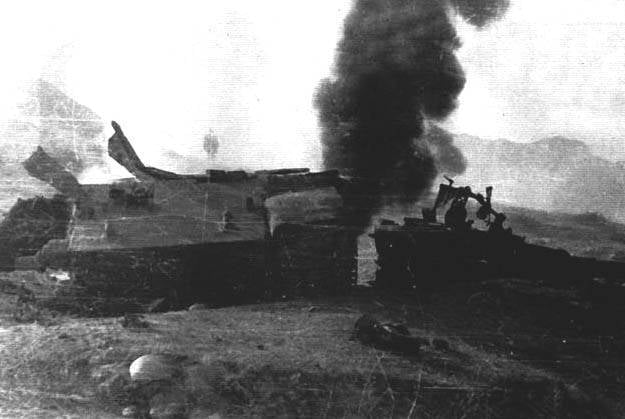 The same T-62, destroyed by an internal explosion of ammunition. Front view (photo from the archive of the club "Debt", Moscow)

Ctrl Enter
Noticed a mistake Highlight text and press. Ctrl + Enter
We are
Tactics of the Afghan insurgentsCaptain A.V. Marievsky: German cars were against *** T-34
19 comments
Information
Dear reader, to leave comments on the publication, you must to register.