April 23 2013
8
“The collapse of the USSR took place against the background of a general economic, foreign policy and demographic crisis. In 1989, the first time officially announced the beginning of the economic crisis in the USSR. A number of ethnic conflicts flare up on the territory of the USSR. The Karabakh conflict that started in 1988 was the most acute. Mutual ethnic cleansing takes place, the exodus of Armenians from Azerbaijan and Azerbaijanis with Muslim Kurds from Armenia begins. In 1989, the Supreme Soviet of the Armenian SSR announces the annexation of Nagorno-Karabakh. In the summer of the same year, the Armenian SSR imposes a blockade on the Nakhichevan Autonomous Soviet Socialist Republic, and the Popular Front of Azerbaijan declares an economic blockade on the whole of Armenia as a retaliatory measure. In April, the 1991 of the year between the two Soviet republics actually begins the war. ”

A helicopter of the Azerbaijani army performed a regular flight in the region of Nagorno-Karabakh. At the helm of the Mi-24 was a young Russian guy Andrei, who just a year and a half ago graduated from a military school and was assigned to a separate helicopter squadron of the Soviet, then still, army in the city of Azerbaijan. 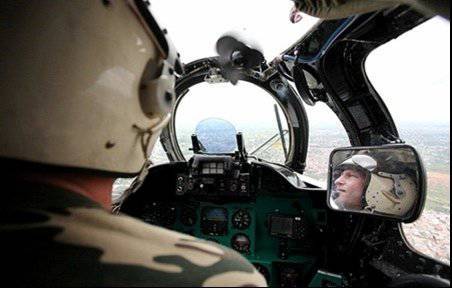 Flying past the picturesque gorge along a small mountain road, along which a column of heavy machinery had recently passed, Andrei reflected on the events in his life of the past year and a half:

“In 1991, two young lieutenants came to the squadron, both graduates of flight schools. Andrei was a native of a small provincial village, a typical provincial guy who had dreamed of becoming a pilot since childhood and did everything possible to fulfill his dream: he went in for sports, went to the regional center to an aircraft modeling club, studied literature about aviation, reviewed all films about military pilots. Andrey was a simple-hearted, kind, but at the same time persistent and purposeful guy. In the last year of school, Andrei married, but did not bring his wife to the squadron, left her at home with his parents, as he was afraid to lead her into the unknown.

The second is Artem, the capital boy who was forced to enter the school by his father - a former military man. Artyom was very developed and gifted in all respects. Studying was easy for him, he did not spend time on cramming and spent free time on entertainment. Artyom was witty and funny, resourceful, liked girls, often disappeared in discos.

The lieutenants arrived at the squadron in August 1991. At first political events of the time had no effect on the life of the squadron, the service continued in its normal course. The young lieutenants were temporarily assigned a bachelor officer’s hostel to a vacant room, and their service began. However, it did not last long.

From the very beginning, Artyom stated that he was unwilling to serve "in this hole" and intends to dismiss by any means. Andrew, on the contrary, wanted to serve, but in the light of the latest political events in the country, the prospects were far from bright. It became clear that the troops would soon be withdrawn from the Transcaucasus to Russia, where, most likely, family Andrei would receive housing from a very distant future.

Already in October, the so-called “recruiters” from the newly formed Azerbaijani army began to appear in the hostel. They offered the pilots to sign a contract for service in their army, for which they promised the "golden mountains": an apartment in Baku, a car and a very good salary, which would exceed the current salary several times.

After long and painful deliberation, Andrew decided to accept the offer of a "recruiter" and conclude a contract. He reasoned that regular and frequent flights, of which he had dreamed so much, an apartment where he could bring his wife, a good salary — he would not see all this in the Russian army soon, but he wanted to.

Artem, on the contrary, he did not want to serve in any army - neither in Russian, nor in Azerbaijan, nor in any other. In general, both wrote a letter of resignation on the same day and waited for an order. At the same time, Artyom almost completely stopped attending the service and was disappearing all the time. In the local market, he met merchants who complained that after the aggravation of relations with Armenia, their shuttle business from Turkey was decaying. Artem, quickly estimating the possible profit, offered them his services and went head over to the semi-legal business. He traveled to the Armenian-Turkish border, there he bought various Turkish clothes in bulk, brought them to Azerbaijan, where he sold them profitably.

In March 1992 of the year came the orders for dismissal. Andrei went to Baku. And Artem disappeared somewhere on the Armenian-Turkish border. It was rumored that he started his own business. ”

Andrei’s thoughts were interrupted by the second pilot-navigator’s voice:
- Right on the course I observe dust, a column.
- Include weapons. Prepare for an attack, - Andrew ordered without hesitation.
When approaching the Armenian column, the helicopter made a small “slide” and without preliminary passage, suddenly falling down from above, made a series of volleys of unguided rockets on the column, then shot the gun going ahead of the BTR and, making a sharp lapel, began to go for a second strike.

Suddenly Andrew saw on the right a pair of twenty-fours going at him. He made a sharp turn to go beyond the nearest small skyscraper and reported to KP:
- 365, found the target, attacked, watch the escort - a couple of "humpback", departing.

Suddenly Andrew heard a familiar voice on the air:
- Andryukha! Are you?
- Who is it? - Andrei answered with a question, directing his helicopter to a small valley at an extremely low altitude.
“You are not a brother, I did not know, this is me, Artem!”
- ?!... Well hello. What are you doing here?
- Debts brother, debts. Here I work.
- And what will we do?
- I'm afraid that you and I have no choice.
...

In this unequal air battle both friends were killed.

Ctrl Enter
Noticed a mistake Highlight text and press. Ctrl + Enter
We are
Red Persia. Part of 3. How South Azerbaijan almost went to the USSRHow did the first interethnic conflict in the USSR begin? Caucasian Knot
8 comments
Information
Dear reader, to leave comments on the publication, you must to register.