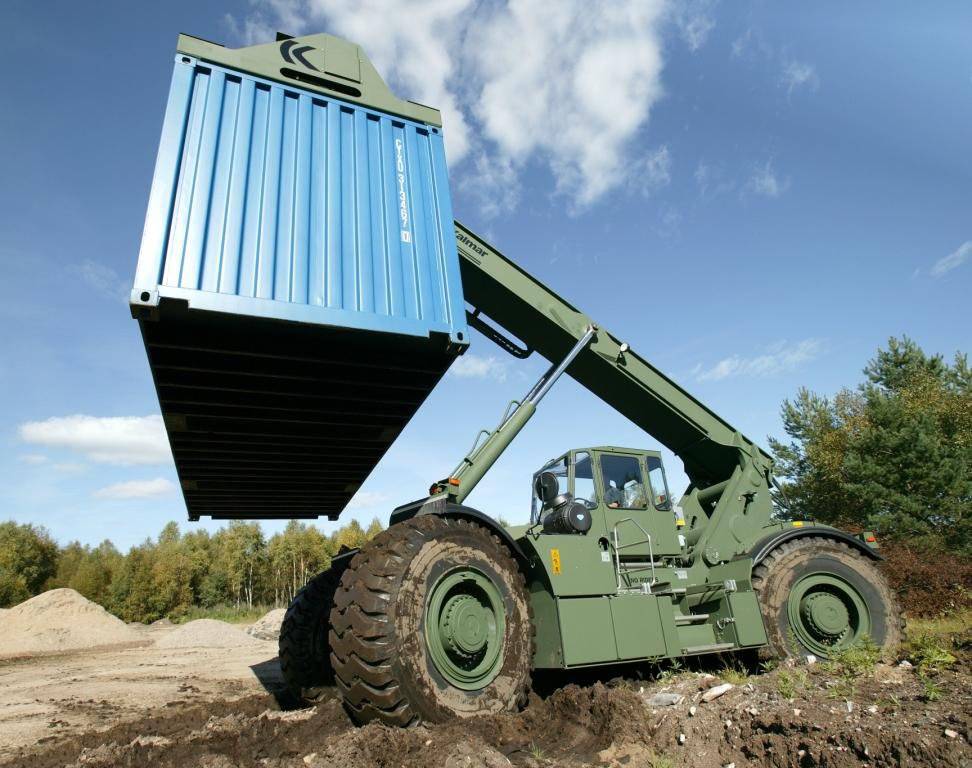 Rough Terrain Container Handler (RTCH, pronounced retouch) container lifters allow you to handle standard ANSI / ISO freight containers that have recently become the backbone of US and allied military logistics. For example, only during the transportation of the third and fourth infantry divisions in January 2005, more than 4200 trailers and containers were handled on the CRSP LSA Anaconda transshipment base. According to the Container Management Support Tool, since the start of the Operation Enduring Freedom and Iraqi Freedom, the US government has paid over 500 million dollars for the use of privately owned containers. The fact is that the US government has to pay penalties to private companies in the event that its container is not returned to the carrier during the 10-day grace period. In order to reduce costs, the army chose two ways, first, to maximize state-owned containers, and second, to minimize the time for loading and unloading. RTCH is best suited for this purpose. Deployment conditions do not always allow the use of a standard container lift. Snow, mud and just not prepared site can create insurmountable obstacles to their work. In this connection, two main models of off-road container lifters were adopted, the American Caterpillar and the Finnish Kalmar (the company is formally recorded in Finland). 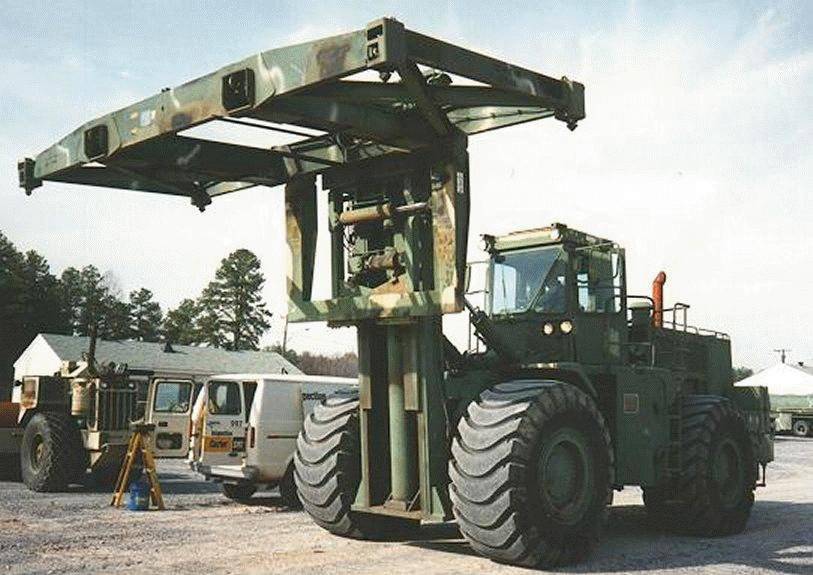 The container lift has a tonnage capacity of 22.6, is equipped with a Caterpillar 3408 diesel engine with HP 393 turbocharging power, and later 988F models are equipped with a Caterpillar 3408E HEUI diesel engine with 430 turbocharging HP power. The RTCH Caterpillar has articulated steering and all-wheel drive on all four wheels. He has a container hook on top, produced by the Caterpillar Tractor Company in Peoria, Illinois. In order to reduce the cost and simplify maintenance during its manufacture, the maximum possible number of civilian components was used. The contract for the supply of RTCH was concluded in the 1978 year, 320 machines were delivered from the end of 1981 to the beginning of 1985. The cost of the first model was $ 159,138 at 1978 prices of the year. A small number of these vehicles were purchased by the US Air Force, and more than 120 of these vehicles were received by the US Marine Corps. The container lifters were delivered to the Marine Corps in the 1988 year and were slightly different from those previously set up for the army. The RTCH Caterpillar was created on the basis of the commercial Caterpillar 988B forklift with the addition of a forklift mast like the Hyster loader. Later models were based on the Caterpillar 988F forklift. So in 1997, additional 43 machines based on this model were supplied. 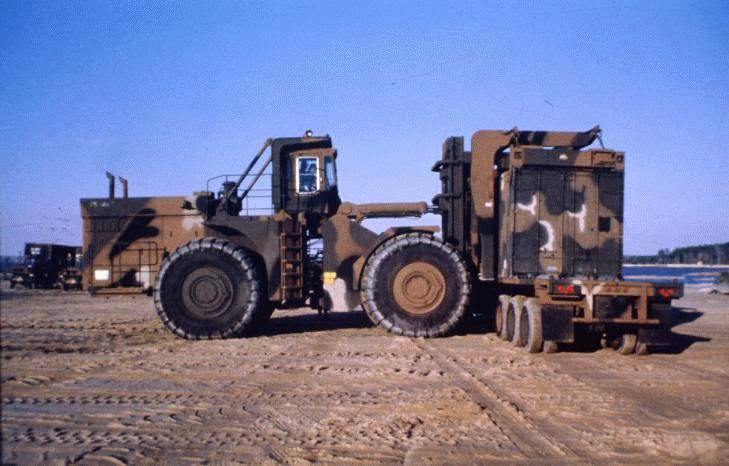 RTCH provides the ability to work with containers 2.4 meter wide, 6 long and 12 meters (20-and 40-and foot containers) and the total weight up to 22.6 tons. It can work on soft soils, such as unprepared sandy beaches and even in sea water at a depth of one and a half meters. Its length is 10.7, width 3.55 and height 4.12 meters, the maximum speed on the highway 40 km / h, the climb is 30%. RTCH Caterpillar is able to stack two containers in height, and can also place them on road or railway platforms. The machine is controlled by one operator and does not carry any weapons, as it is designed to work in the points of material and technical supply. 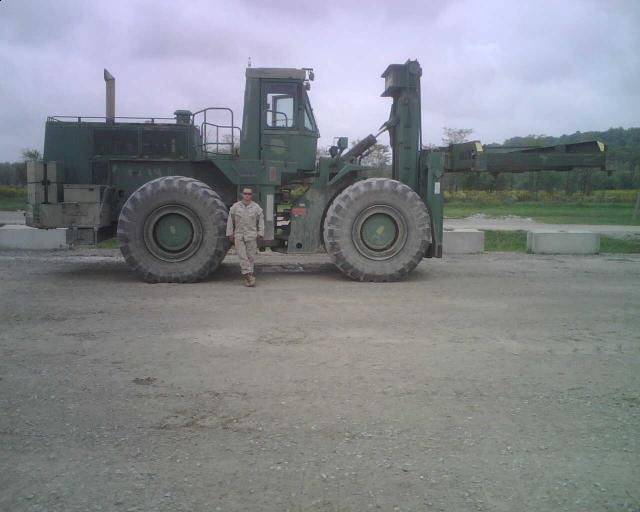 The top hook fits both ANSI / ISO containers of long 6 and 12 meters. This hook is located on the retractable fork, which provides processing of ANSI / ISO containers of various lengths. If necessary, it can also handle even more containers; in this case, 12-meter fittings are used. The RTCH kit also comes with regular plugs used for loading and unloading flatbed trailers and railway platforms or for moving and storing inventory items. 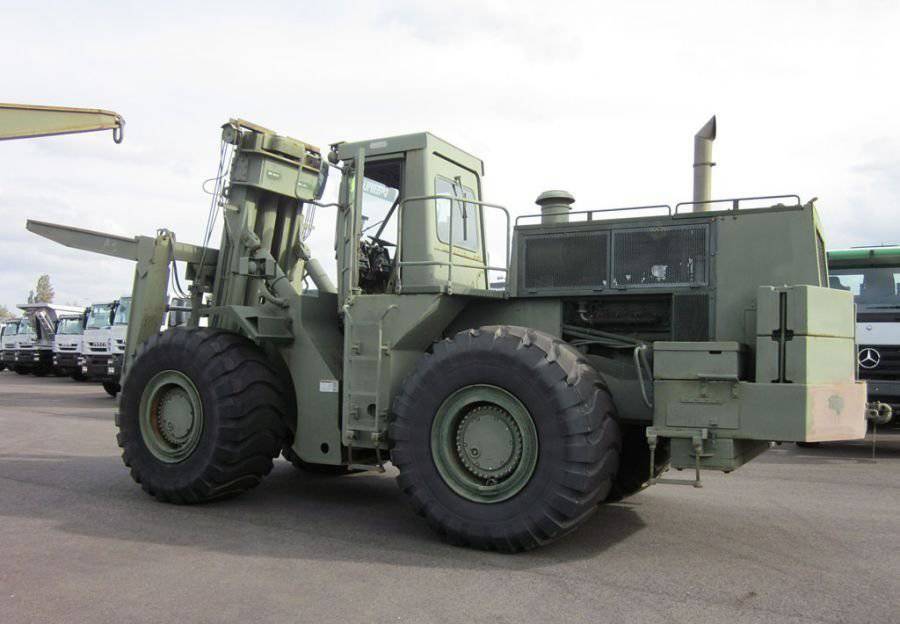 The lifespan was calculated for 11 years, but in practice it was 15 years. By the 2005 year, all container lifters of the American Army and Marine Corps underwent a major overhaul at the Caterpillar plant in order to extend their service life. So in 2006, the total number of RTCH Caterpillar was 668 machines. In 2000, the US Army contracted Kalmar for the production of more than 500 new container lifts for Kalmar RT240 rough terrain to replace the aging Caterpillar fleet. 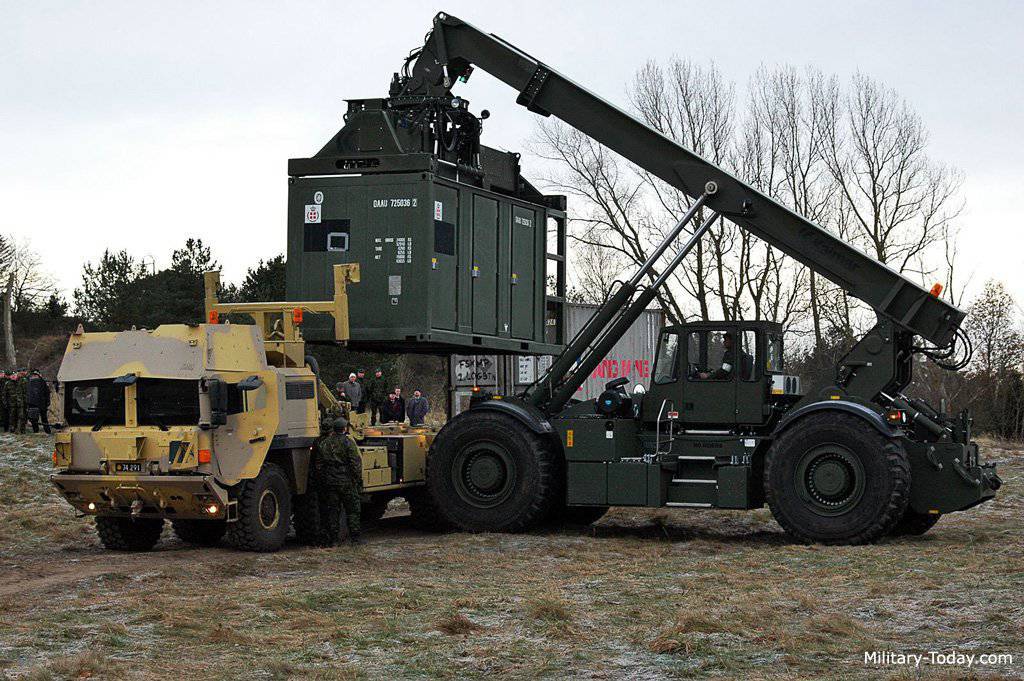 Kalmar RT-240 cross-country container lift is the successor of RTCH Caterpillar and is manufactured by Kalmar in San Antonio, Texas (Kalmar itself is registered in Finland). The second RTCH was conceived as early as the end of the 1990's by the US Army Transportation School in order to take advantage of the worldwide standardization of sea containers. RTCH Kalmar RT240 was developed in close collaboration with the US Army, designed to handle containers in extreme conditions. RTCH Kalmar is able to lift two 6-meter containers from the railway platform at once or one 12-meter container at a time, which further accelerates loading and unloading. Kalmar Industries was awarded a contract for the production of RTCH in April 2000 of the year based on their commercial container truck RT-240 Reach Stacker. 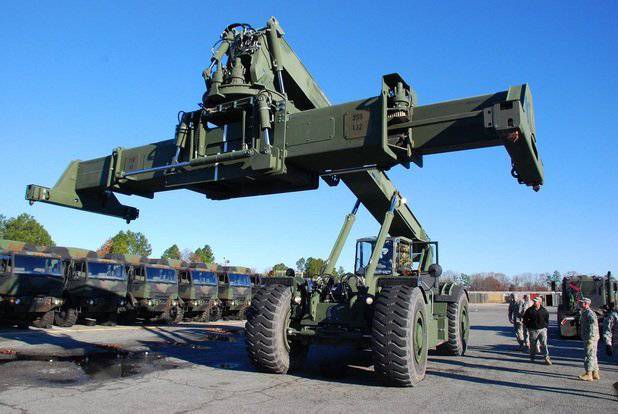 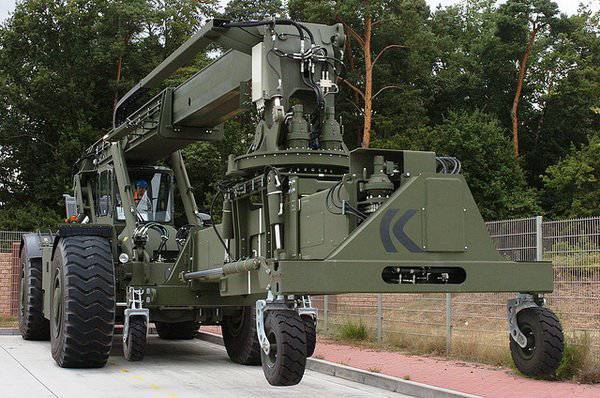 By December 2004, the American army received 346 RTCH Kalmar purchased under the original contract. At the same time, the Marine Corps joined the army and acquired 25's own RTCH with plans to acquire a total of 105 container lifts. The British Army acquired at least 20 RTCH Kalmar for use in Iraq. In addition, Kalmar is in service with Australia. The cost of the machine is about $ 500,000 at current prices. 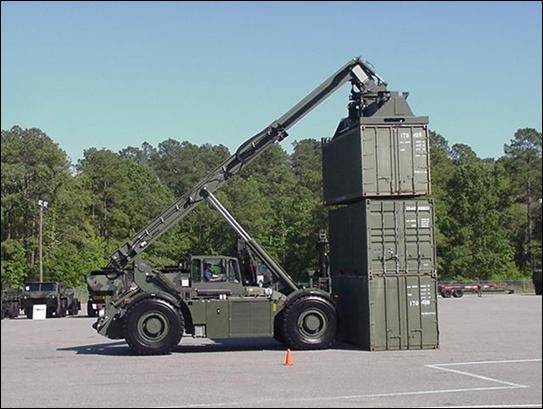 Kalmar RT-240 cross-country container lifts are equipped with a six-cylinder Cummins QSM 11 diesel engine with a HP 400 turbocharged engine. RTCH Kalmar weighs 53.5 tons and is capable of handling containers weighing up to 24040 kg. RTCH Kalmar has a moving operator's cabin and a telescopic boom, which allows it to be transported by air (on C-5 or C-17 aircraft), by sea, rail or road without the need for prior disassembly. 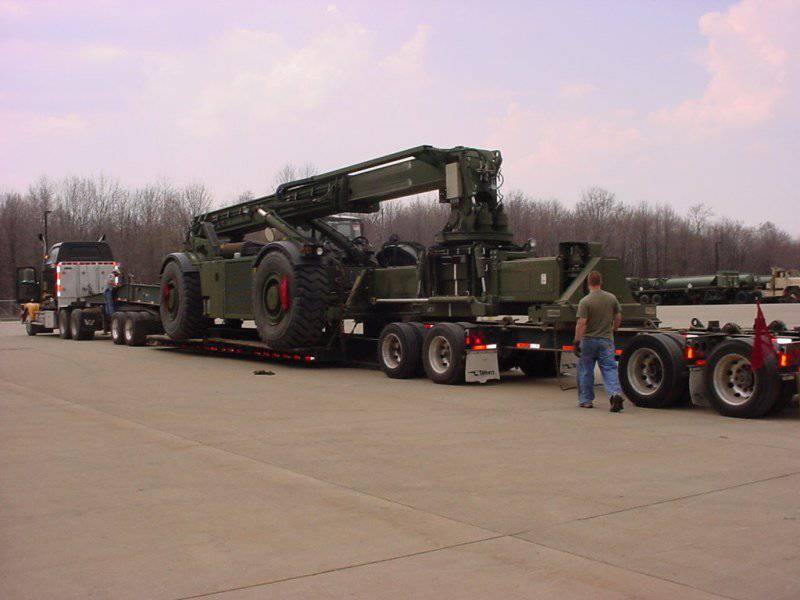 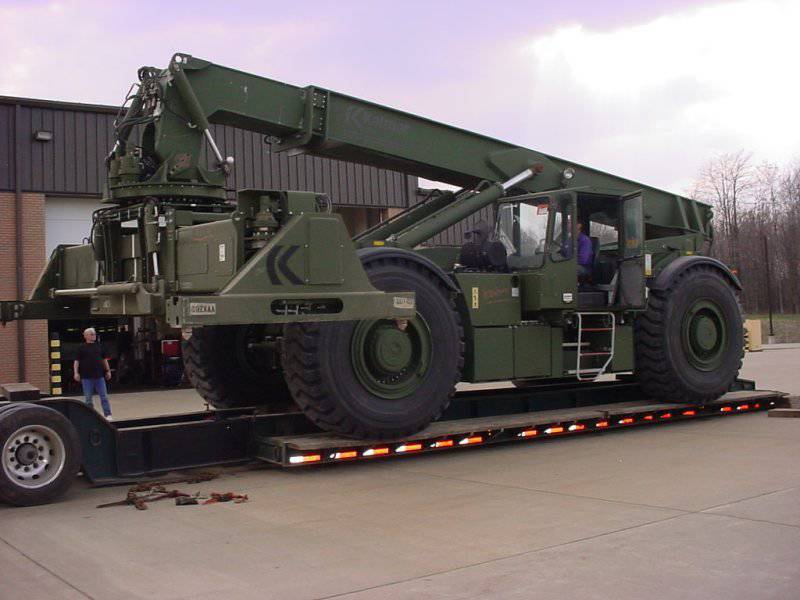 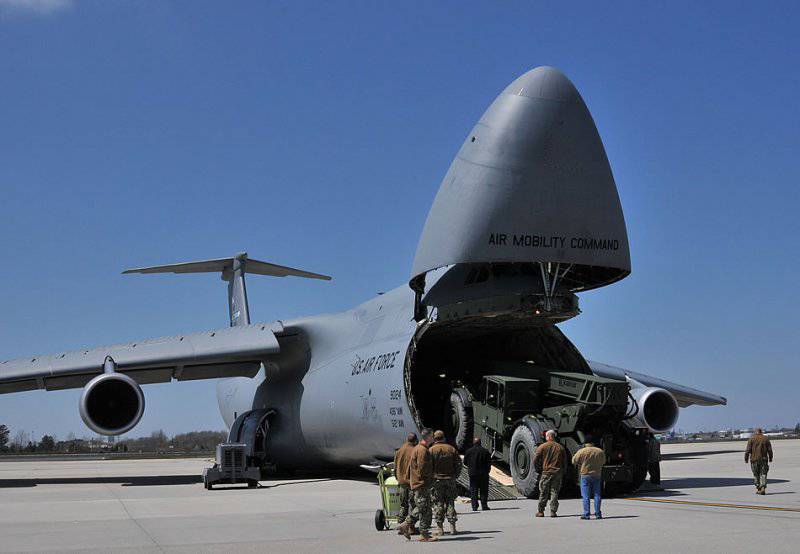 In the transport state, its width is 3.65, the length of 15 and the height of 2.98 meter. Preparing for air transport can be done in less than 30 minutes with just one person without help, as well as the need to disassemble and dismantle any part of the machine. The reduced height also greatly simplifies road transport. According to the manufacturers, Kalmar RT240 is the only container lift capable of working on surfaces with a side slope of 27 degrees and rises to 45 degrees. The operating temperature range of RTCH Kalmar is from -40 ° C to + 50 ° C. 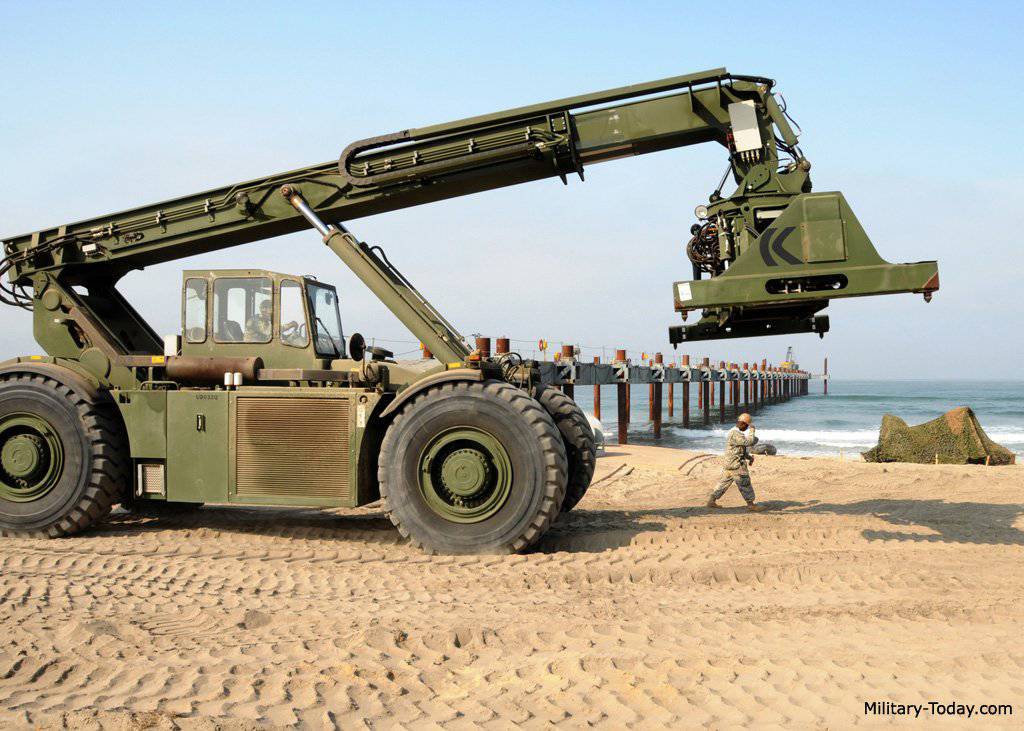 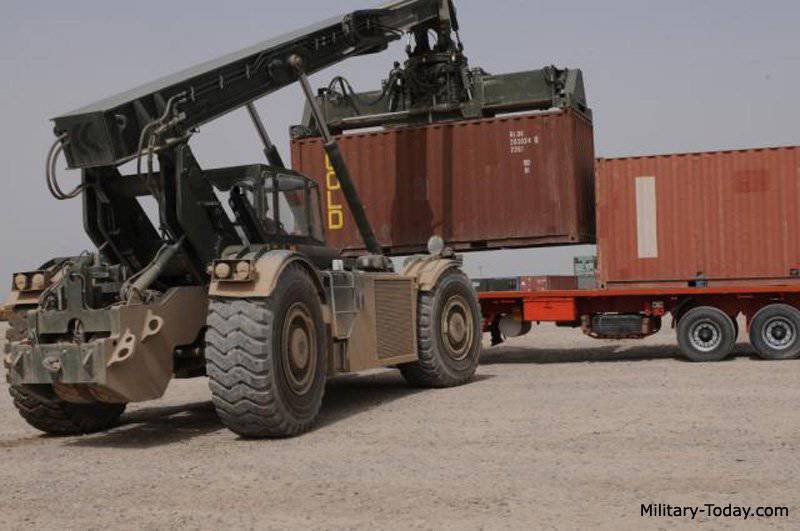 RTCH Kalmar is able to work on the seashore, rugged terrain and unprepared surfaces, where it can stack three containers in height, and an arrow can lift the container in the second row. Like RTCH, Caterpillar has four four-wheel steering wheels and can work in sea water at a depth of one and a half meters (according to the British Army up to 1.8 m), which allows it to unload barges and lay containers on the shore. Unlike most container lifters, RTCH uses one tire on each wheel. All wheels are driving and both axles are turning, simultaneous rotation of all wheels in one direction is possible, and all steering is controlled by a computer for more precise movement. The axles are no-stress, and when driving on roads, a single-axis drive with a single pivot axis is possible. 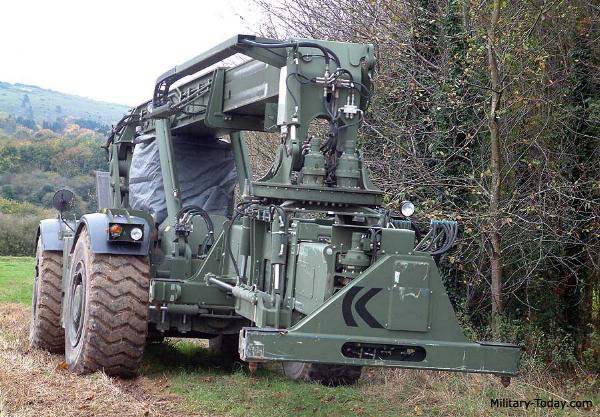 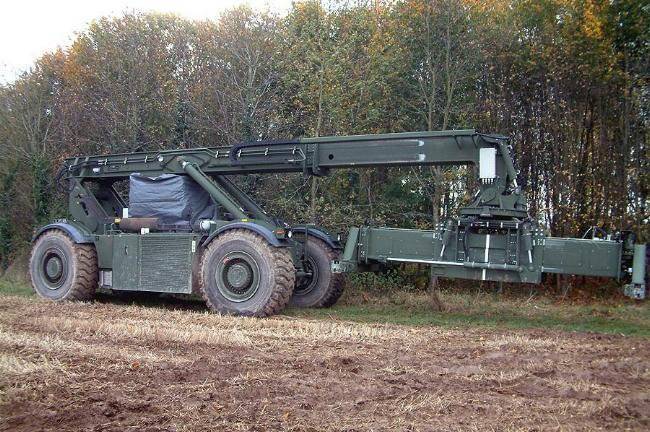 Randy Wingenroth, vice president of Kalmar RT, says: "RT240 revolutionized logistics around the world for the US military and its allies, and now for the first time we are offering this product in the commercial market." 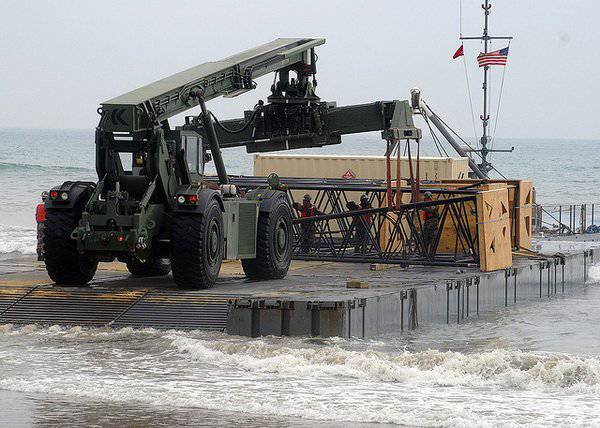 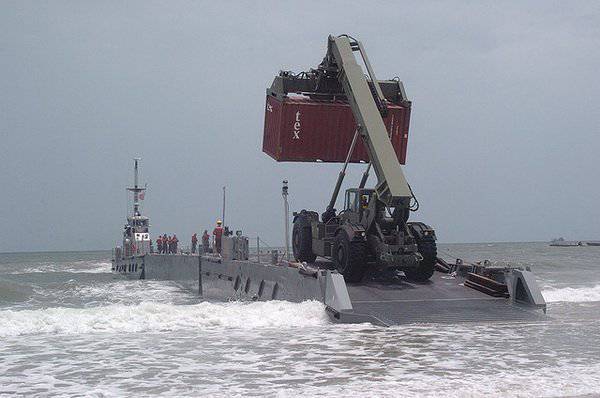 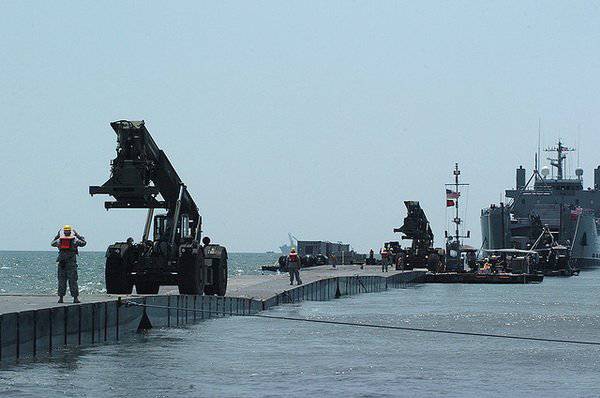 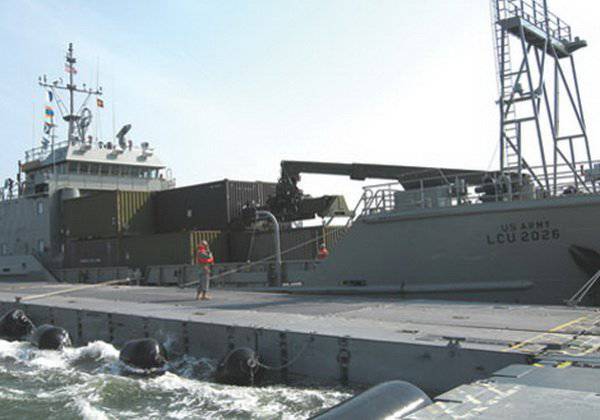 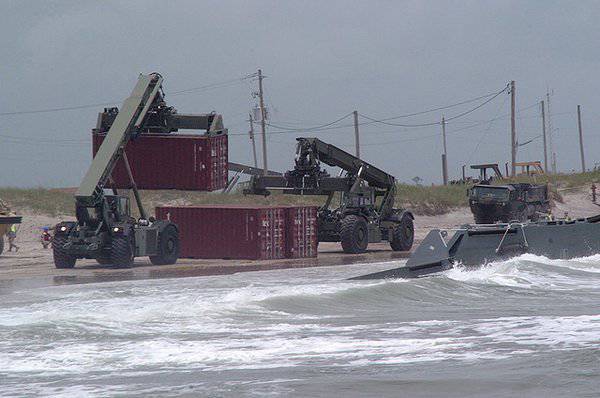 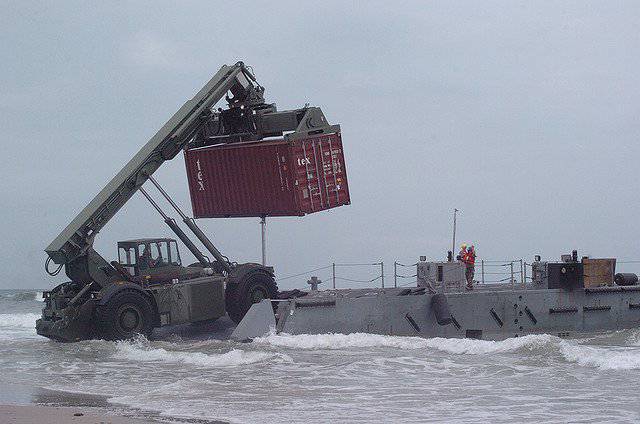 Ctrl Enter
Noticed a mistake Highlight text and press. Ctrl + Enter
We are
Trucks of the First World War. USAKnights of logistics in shining armor. The experience of Iraq, Afghanistan and not only
60 comments
Information
Dear reader, to leave comments on the publication, you must to register.