Heroes of the war with Georgia are returning from opals 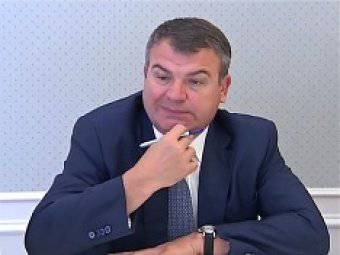 In the near future, serious personnel changes may occur in the Ministry of Defense. Andrei Tretyak, who already held this position until 2010, can become Deputy Chief of the General Staff. An Anatoly Khrulev, the ex-commander of the 58 Army, will head the Academy of the General Staff. Thus, Sergei Shoigu returns to the Defense Ministry generals who commanded the troops who took part in the war with Georgia.


About ten of them had previously been expelled from the military department, including with the establishment of criminal cases. And the reason for the prosecution of the generals often became anonymous letters, addressed to the then current Minister of Defense Anatoly Serdyukov. Sources in the defense ministry say that Serdyukov did not forgive his subordinates that it was they who made all the decisions necessary for a successful operation in Georgia. The minister himself was then unavailable for communication, since during the August events he was allegedly on a hunt in Kazakhstan.

According to the Rosbalt source at the Ministry of Defense, after in August 2008, the shock units of the Russian troops were transferred to Beslan, where they faced a problem that was not given particular importance. Certain persons of “Georgian nationality” began to approach the commanding staff, expressing dissatisfaction with the fact that the military had overloaded the transport infrastructure of Beslan, which hindered their business. They insistently requested that planes, armored personnel carriers and soldiers deliver as little as possible, offering to generously pay for such a service. Having received a refusal, the visitors turned to threats, and only succeeded in putting them in place by a promise of something wrong, or something seriously “shot according to the laws of wartime”. Those responded snapped back: "We know you all by name and you still regret it." Later, representatives of the Ministry of Defense asked the locals who the unknown people were, but they only threw up their hands. There was a version that the visitors were representatives of the Georgian special services, but they were already gone. The generals forgot about the unpleasant incident, but as it turned out, nothing happened.

A source in the military says that after the end of a successful war with Georgia, the generals began to receive threats by telephone from people who spoke with a characteristic Georgian accent. And then anonymous letters began to come to Anatoly Serdyukov’s name and to the Main Military Prosecutor’s Office, not mass ones, but, so-called, point letters. Every six months, the "well-wishers" reported negative information about a general, and only about those who commanded the troops who fought with Georgia. All the anonymous letters began in a standard way: "We, servicemen of the Ministry of Defense, want to report about facts that have become known to us." And then there was a listing of numerous crimes allegedly committed by the generals, some of which were frankly fantastic. GWP did not pay any attention to such letters. But the Defense Ministry suddenly gave them a turn.

At first, the local "special persons" were involved in checking the stated facts, but they did not find any evidence. According to the agency interlocutor, then Anatoly Serdyukov connected his deputy Tatyana Shevtsova to the work, who considered that the inspectors didn’t “dig” well enough. As a result, the legal department of the Ministry of Defense, who was then headed by the former employee of the Federal Tax Service and the “favorite” Serdyukova Marina Balakirev, joined the verification of the unknowns. And then came the organizational conclusions, based, as the sources of Rosbalt assert, on information from anonymous letters.

In 2010, Serdyukov dismissed Commander-in-Chief of the Ground Forces Vladimir Boldyrev, who headed the operational headquarters in Vladikavkaz, coordinating the activities of the military in South Ossetia, and the commander of the North Caucasus Military District, Sergey Makarov. It was he who immediately after the attack of Georgia decided to begin the transfer of troops to Beslan for a possible subsequent offensive. Then the Defense Ministry was forced to leave the deputy commander of the Airborne Forces, Vyacheslav Borisov, who, together with the paratroopers, first entered the territory of South Ossetia seized by Georgia. In the same year, 2010 removed from the military department the deputy chief of the General Staff, Andrei Tretiak, who was immediately responsible for several areas during the war with Georgia. Later he was appointed head of the Academy of the General Staff, but already as a civilian. According to the Rosbalt source at the Ministry of Defense, all the generals were removed extremely harshly, and some were told that they should be happy that they were not yet in the dock.

Then a criminal case was initiated against the commander of the 58 Army Anatoly Khrulev. The general, who was injured during the war in Georgia, was accused of illegally obtaining an apartment from the defense department. The investigation was initiated on the basis of anonymously checking materials by the Ministry of Defense itself. As a result, he was dismissed, the court sentenced Khrulev to two years “conditionally.” Later, the general was pardoned by a special decree of President Dmitry Medvedev.

The next under investigation was the deputy commander of the military transport aviation Valery Shemyakin, who immediately after the Georgian attack on South Ossetia was engaged in the transportation of troops to Beslan, and personally was at the helm of one of the aircraft. It was Shemyakin who carried on the soldier’s blanket the wounded Khrulev to An-72, who delivered the bleeding general for the operation to Moscow. Shemyakin was also charged with unreasonable receipt of an apartment. The materials were collected by the Ministry of Defense as part of the verification of the statement of unknown military personnel. Criminal cases against Khrulev and Shemyakin were led by the same investigator, Immameyev.

It is noteworthy that after the Ministry of Defense received an anonymous letter on Shemyakin, the department for 11 months conducted 16 checks of the information contained in it and found no evidence. But all the same, it was decided to launch an investigation, and then the materials arrived at the 235 th garrison military court. Despite the fact that these materials do not contain a resolution on initiating a case directly against Shemyakin, as required by law, hearings on the hero of the Georgian war continue to this day.

It is worth noting that the charges are not about chic mansions, but about a very modest housing by any measure. In particular, Shemyakinu of the Ministry of Defense was allocated an apartment in the far suburbs worth 800 thousand rubles. Recall that one of the "favorites" Serdyukov - Head of the Department of Property Relations of the Ministry of Defense Evgenia Vasilyeva at that time lived in the 13-room apartment at the price of $ 10 million, which is located in an elite house in Moscow's Molochny Lane. Even more luxurious apartments in this building belong to Anatoly Serdyukov’s sister Galina Puzikova.

“Who the author of the anonymous letters was never established,” the agency’s source said. “My opinion is that they were prepared by the Georgian special services, who collected dossiers on Russian generals, and then sent their compromising materials to the Defense Ministry in the form of letters from unknown servicemen. To the extent that there were checks on the information set out in the messages of "well-wishers", the generals received calls, during which people with a Georgian accent frankly scoffed and promised that they would soon "fly out" from the Ministry of Defense.

Information about such calls "Rosbalt" confirmed Valery Shemyakin. “The unknown really called me, they remembered the war with Georgia, they promised trouble,” the general told the agency. Why did Anatoly Serdyukov decide to move anonymous letters in spite of the fact that the authorities of Georgia could relate to them? Source "Rosbalt" in the Ministry of Defense expressed the opinion that this is directly related to the operation of "peace enforcement". After the Georgian troops began shelling South Ossetia, the generals, including Makarov and Khrulev, could not reach Serdyukov. Ostensibly at that moment he was on a hunt in Kazakhstan. As a result, it was decided to start the transfer of troops to Beslan without the approval of the Minister of Defense.

According to the agency interlocutor, Serdyukov appeared only ten hours later, but did not show any activity in a critical situation. Generals largely had to act at their own peril and risk. As a result, they became the heroes of the Georgian campaign, while Serdyukov faded into the background. And then the commanders and their deputies were expelled from the Ministry of Defense - as an unpleasant reminder of the events of August 2008.

A source in the Defense Ministry notes that the internal conflict among Serdyukov’s “favorites” also affected the resignations. The same apartments, mainly, which became the reason for claims against the generals, were issued by the decision of the Department of Housing (JO) of the Ministry of Defense, which was headed by a former employee of the Federal Tax Service of the Russian Federation Olga Lirshaft. It is unlikely that Serdyukov would have challenged the decisions of his “favorite”. However, according to the agency interlocutor, then Lirshaft fell into disgrace: allegedly because of the conflict around Vasilyeva. As a result, led to the resignation of the head of JO. And in such a situation, the fairness of allocating Lirshaft apartments could be questioned and even attracted the attention of law enforcement agencies.