April 22 2013
27
Nowadays, a part of the barrel artillery of the ground forces of foreign countries includes towed and self-propelled guns, which are called "howitzers", since their main purpose is to conduct outboard shooting from remote closed positions. At the same time, most modern howitzers are able to shoot and direct fire at distances up to 2 kilometers, depending on the design features. It is this feature, as well as the length of the barrel of foreign howitzers, in some way change their purpose, defined in the Russian classification for the notion of a "howitzer" when dividing artillery guns into howitzers and cannons.


First of all, the correction in terminology is due to the development of artillery mounts, which are created taking into account possible rapid changes in the combat situation. In the conditions of the rapidity of modern combat, field artillery must correspond to the deployment capabilities and the level of mobility of the units and subunits supported by it. At the same time, their main task in providing fire support to artillery units can be solved only with a sufficiently high accuracy of shooting, as well as a small amount of time to prepare for opening fire and collapsing firing positions after solving all the tasks, in order not to fall under enemy counter-fire.

On the one hand, these requirements are fully met by self-propelled artillery (ACS), which theoretically has an advantage over towed guns. But at the same time, ACS have a number of weaknesses and weaknesses. For example, they have a much larger mass than towed howitzers. Recently, the fact that since the beginning of the 1980-s most of them are equipped with auxiliary propulsive devices, which allow the guns to be moved for short distances without using tractors and vehicles, is in favor of conventional towed howitzers. 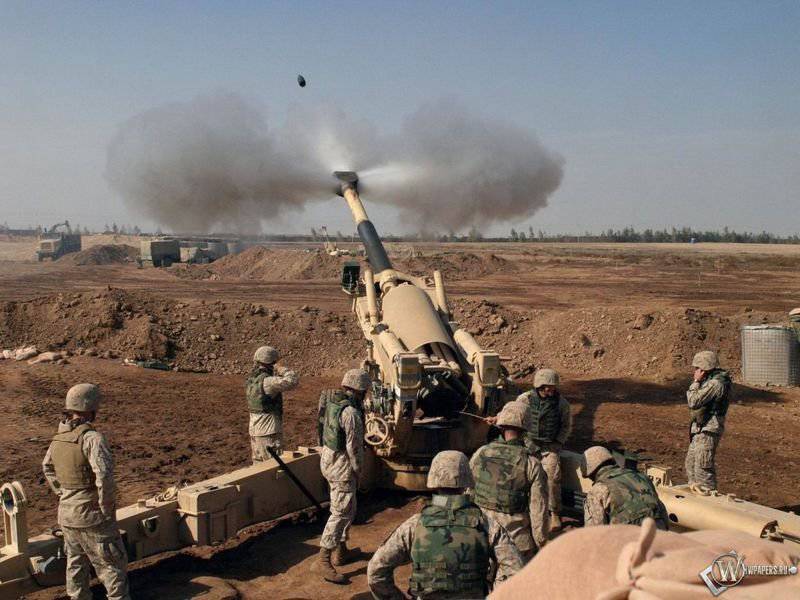 Currently, in Russia, the full-scale state tests have been carried by the 125-mm cannon, which are self-propelled by the Sprut-B 2A45М and the lightweight Patn-B 152-mm howitzer, which has mechanized dropping of the projectile and variable recoil length, passed by the towed. These artillery systems mounted on three-sided gun carriages like D-2A howitzer provide circular firing at vertical guidance angles from -61 to + 30 degrees. At the same time on the carriage mounted mechanism dosyl shells, which provides howitzer rate of fire to 5 rounds per minute. On the top machine howitzer to protect the calculation of bullets and shrapnel installed light shield cover.

At the same time, the lightweight 152-mm howitzer “Pat-B” with weight in 4350 kg. it is two times more powerful than the 122-mm howitzer D-30A. The whole procedure of transferring this howitzer from the marching position to the combat position and back takes no more than 2 minutes. In addition to this, howitzer can be used 152-mm guided munitions "Krasnopol". Also on the basis of the light howitzer 2А61 "Pat-B", an experimental 155-mm sample was made for NATO ammunition.

The latest achievements in the field of technologies for the production of barrels with a length of 52 caliber allow firing at distances up to 40 km. Such a range, in turn, allows artillery batteries to equip firing positions much farther from the front line, which reduces the risk of destruction from artillery shell fragments and rifle fire. weapons enemy, reduces the need for armor protection calculations artillery guns. 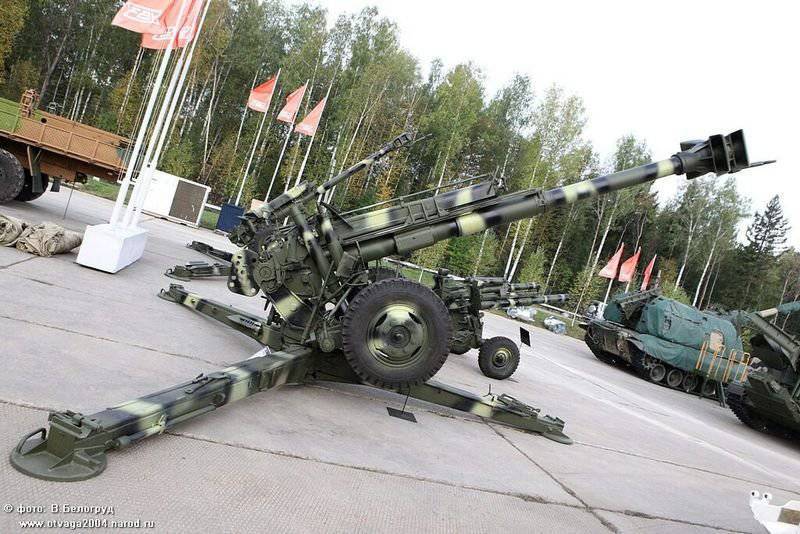 152-mm howitzer "Pat-B"
Many foreign experts, analyzing self-propelled guns and towed artillery, in favor of the second include not only the combat capabilities of the howitzers, but also lower cash costs for military equipment and weapons of artillery units, for the maintenance and equipment of personnel. If we are guided by saving money, we can conclude that the 3 batteries of towed howitzers, which are equipped with conscripts, cost a little more than the 1 batteries of self-propelled howitzers, equipped with contract soldiers.

If we evaluate howitzers by the “cost / effectiveness” criterion, we can note the fact that for highly developed countries with a stable economy, it is preferable to have self-propelled howitzers in service. For developing countries, an unequivocal answer to this question is rather difficult to give. For this it is necessary to take into account a number of points: ensuring the performance of its functions during the entire battle, the ability to provide continuous fire support for troops over long distances; the ability to quickly change artillery positions.

In this case, towed and self-propelled howitzers today have the same range of fire. At the same time, the 3 battalion of the towed howitzers (BG) can be much more efficient (compared to the 1 battalion of the ACS) due to the numerical superiority of the gun barrels, as well as the greater number of shots fired. The survivability of the towed howitzers has also increased, since the 2-3 of the BG division represents a more complex goal. And the possibility of self-movement of weapons (due to the presence of an auxiliary propulsion unit) at a distance of up to 500 meters significantly increases the chances for the survival of weapons in combat. In addition, towed artillery is more difficult to detect using ground-based electronic reconnaissance equipment. According to these towed artillery still has some superiority over self-propelled. 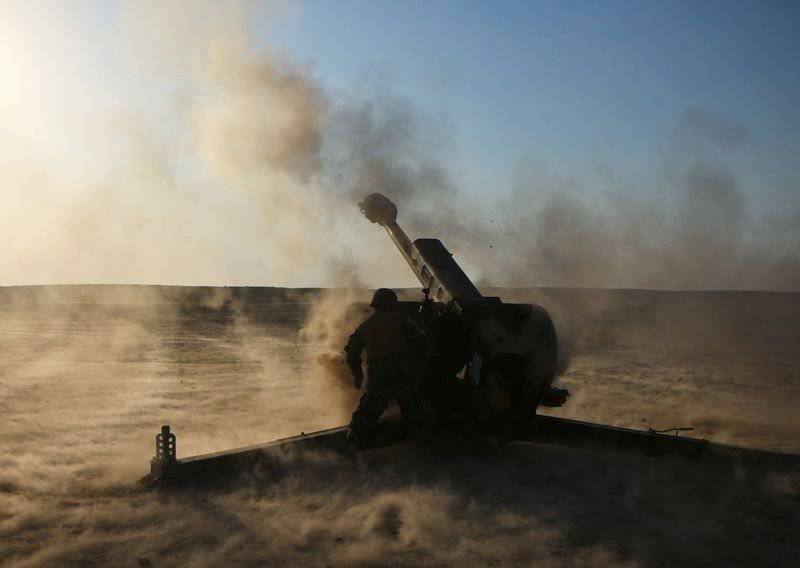 At present, Western experts believe that the ideal artillery gun should have a mass comparable to 105-mm guns, and the firing range and fire power at the level of 155-mm guns. Experts believe that modern advances in the field of metallurgy, in particular titanium and aluminum alloys, will help to make this wish a reality. Today, the insufficient range of firing light 105-mm howitzers (at the level of 20 km) limits the possibilities for their combat use, despite a number of their advantages. In addition, the impact on the targets fired 105-mm ammunition does not always meet the requirements of the combat situation. This disadvantage is due to the linear dimensions of the artillery shells and, accordingly, the difference in their volume. The growth of the caliber of shells from 105 to 155 mm is able to increase the power of the charge in the munition warhead immediately 4 times.

Today, most states are upgrading developed heavy 155-mm towed howitzers, which can not be transported on the external suspension of helicopters. The main efforts of designers are aimed at increasing the range and increasing the accuracy of fire, achieving partial autonomy (as in the Russian Pat-B) and reducing the time for preparation (readiness time) for firing.

So in South Korea during the modernization of the American 155-mm howitzer М114А1 was created howitzer КН179. As a result of the work carried out, the maximum range of high-explosive fragmentation ammunition was increased from 14 600 to 22 000 meters, and with active-reactive ammunition - to 30 000 meters. At the same time, as noted by Western experts, active-reactive ammunition is practically not used for firing from this howitzer. It was possible to increase the firing range by using a new barrel with a length of 39 caliber 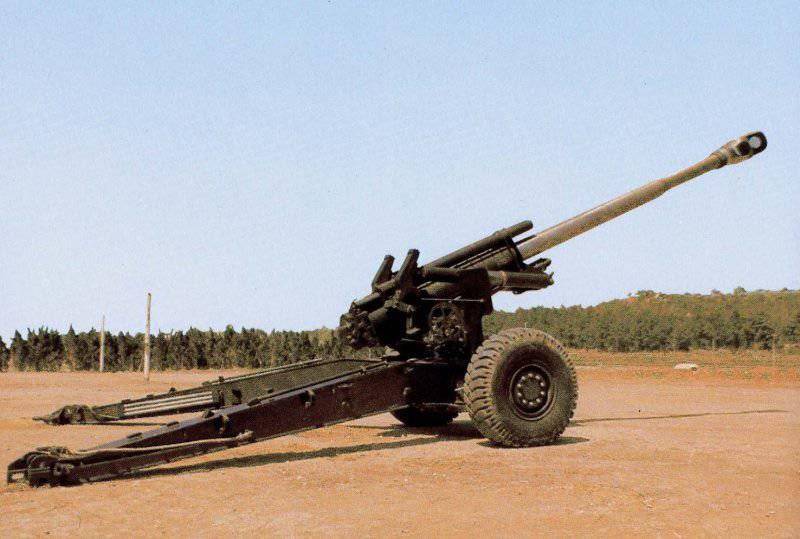 155-mm howitzer KH179
The Swedish company "Bofors" to reduce the load on the calculation of heavy 155-mm howitzer FH-77B with a barrel length 39 caliber created a special crane for lifting projectiles. This crane is mounted on the right side of the breech howitzer. In addition, FH-77B differs in that the fire from it is carried out without lifting the wheels. At the same time, as with the South Korean howitzer KH179, active-projectiles are usually not used when firing.

In order to achieve even greater range of fire today artillery barrels with a length of 45 and 52 caliber were developed. However, one should take into account the fact that as the length of the barrel increases, the combat weight of the howitzers also increases. Currently, the South African G155 Mk5 with a barrel length 3 caliber is the most severe of the 45-mm howitzers. The mass of this howitzer is about 14 t, and the range of firing with active-reactive ammunition reaches 39 km. The carriage of this howitzer allows you to mount barrels of length 39 and 52 calibers. As well as the South African development, GH howitzers (Finland), TIG 2000 (Israel) and GH N (Austria, Belgium, Canada) can be equipped with barrels of various lengths if necessary. At the same time, the increase in the mass of the swinging part led to an increase in the load on the gun crew when converting from the traveling position to the combat position and back and when shooting.

To facilitate the maintenance process, modern heavy howitzers with 45 and 52 barrels of caliber are equipped with an auxiliary propulsor, which drives the mechanisms of loading (feeding) projectiles and charges and howitzer pointing drives. In addition, this propulsion unit allows the howitzer to be moved for a limited distance with an average speed of movement along the highway - 15-18 km / h, over rough terrain - 8-10 km / h. At the same time, a number of samples, for example, GH N-45, are also produced without auxiliary propulsion unit. This howitzer differs from its counterparts also in the fact that for driving on soft soils its wheels can be equipped with special tracks. 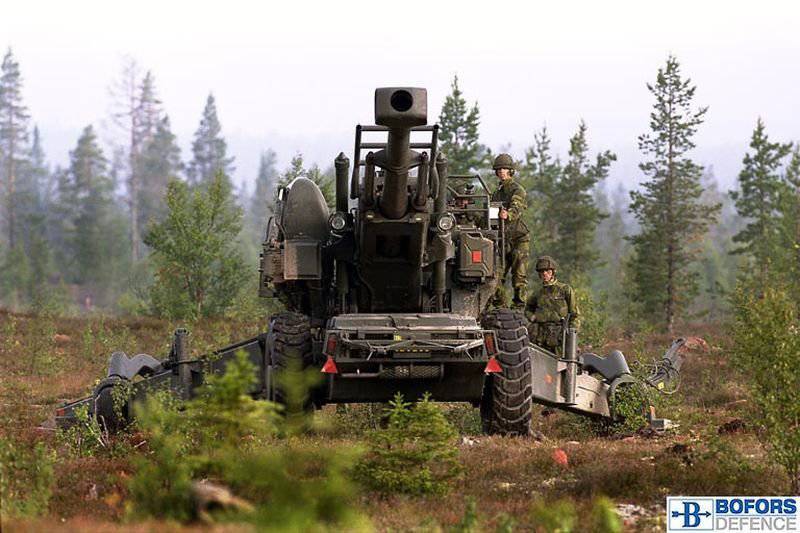 155-mm howitzer FH-77B
Equipping the towed howitzers with an auxiliary engine ensures their partial autonomy. At the same time, the development of automatic fire control systems is becoming increasingly important. For example, Denel from South Africa is developing and conducting tests on the basis of a laser ring gyro for a heavy 155-mm howitzer G5 Mk3. The African SLA allows you to shoot the first shot 2,5 minutes after the gun arrives at the position. The accuracy of pointing the trunk is 1 division of the protractor. However, this howitzer has the disadvantage of all heavy howitzers, the limited possibilities of transportation by air.

To date, it can be concluded that the development of towed howitzers and artillery cannons traced 2-e main trends: the first concerns the reduction of the mass of artillery systems, the second - to improve the accuracy of fire. At the same time, the combat mass of howitzers has a direct impact on the possibility of operational transportation of artillery systems, including long range. Also, foreign experts in the field of design and development of artillery are paying considerable attention to economic issues. By reducing the combat mass of the artillery, the costs of transporting an 1 artillery gun are also reduced.

If we talk about improving the accuracy of fire, then this is one of the prerequisites of all modern military developments. This criterion is very important for quick strikes and timely withdrawal of units. The higher the accuracy of firing, the smaller the amount of expensive ammunition needed to hit the target. Reducing the use of ammunition, in turn, leads to cost savings, as well as reduces the load on the logistical support agencies and increases the speed of deployment of artillery units. The ability to deliver accurate artillery strikes is especially necessary during peacekeeping operations and operations at a significant distance from the main ground forces.

Ctrl Enter
Noticed a mistake Highlight text and press. Ctrl + Enter
We are
Artillery of the Korean People’s Army. Part of 2. Self-propelled guns155-mm self-propelled howitzer XM1203 NLOS-C (Part 1)
27 comments
Information
Dear reader, to leave comments on the publication, you must to register.