"Mistral" and "Rhino". The choice is obvious 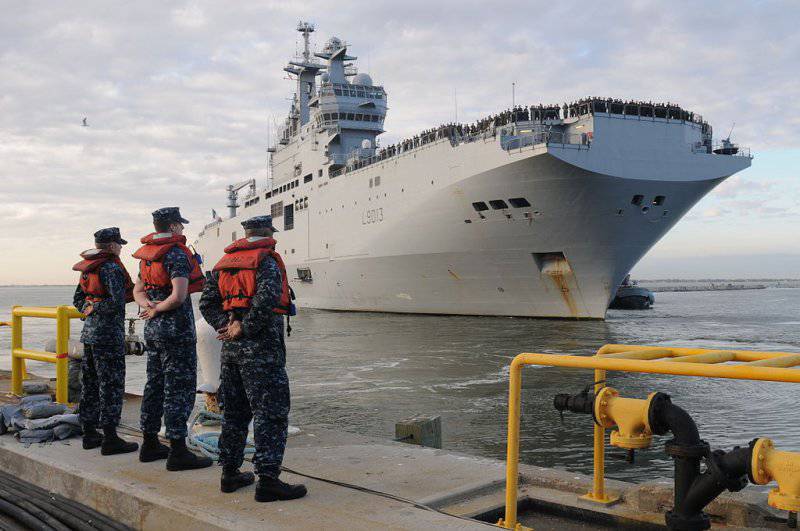 2012 year brought two interesting news for the Russian Navy. The first optimistic event took place on February 1 in the small port town of Saint-Nazaire in the west of France - cutting of metal for the first universal landing craft-helicopter carrier Mistral a la Rus began on the day at the shipyard STX France. Along the way, the name of the future ship, Vladivostok, became known.
It is noteworthy that, despite the Russian-French nature of the agreement, the construction of two Mistrals for the Russian Navy is being de facto conducted at the STX shipyard, owned by South Korea! Large-scale international project, which draws a good half of the world. The total value of the contract, according to open sources, was 1,7 billion euros.

The second important news was announced in September: the Russian Defense Ministry decided to hold an unusual auction. Lot is the largest landing ship of the Russian Navy to date, the last BDK of the 1174 project (code "Rhino").

- Million dollars. Who is bigger?

And "Mitrofan Moskalenko" went under the hammer. 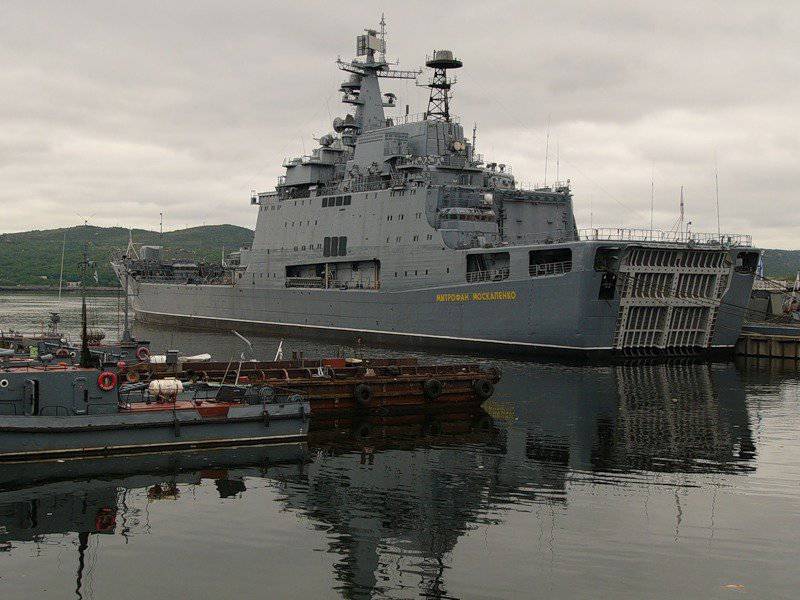 However, the results of this farce are known in advance - “Mitrofan Moskalenko” will not cost more than $ 2,5 million - this is the maximum market value of 11 thousand tons of steel structures of the hull of the old ship. The last of the major Soviet BDK is sold at the price of ordinary scrap metal.
To a reasonable question: Why are you doing this? - the representatives of the Ministry of Defense found a fully reasoned answer:
- The Ministry of Defense of Russia decided to write off the BDK “Mitrofan Moskalenko” and put it into scrap primarily for economic reasons. Its repair would cost an amount for which at least two small artillery ships can be built. And from a strategic point of view, its demand is not obvious - Russia is not going to land a naval landing force anywhere.

Everything goes as usual. It would seem, what does the purchase of the most up-to-date helicopter carrier in France have to do with the tragicomedy of the recycling of the old Soviet junk? The source in the Ministry of Defense is absolutely right: given the current state of the Russian Navy and the general geopolitical situation in the world, conducting amphibious assault forces is possible only in the form of joint operations by forces of Russia and NATO countries. Obviously, this is contrary to the foreign policy interests of Russia, and, therefore, amphibious assault ships of the Russian Navy are not needed in principle.

The economic factor is important - the repair of the old BDK "Mitrofan Moskalenko" will cost as the construction of two new small artillery ships ... Stop!
Compare MAC and BDK? Guys, this sounds as ridiculous as an advertising slogan: “Buy a car and get a baseball cap as a gift.” IAC and Mitrofan Moskalenko are two different categories of things. 14000-ton universal ocean ship and 500-ton coastal boat with primitive weapons. 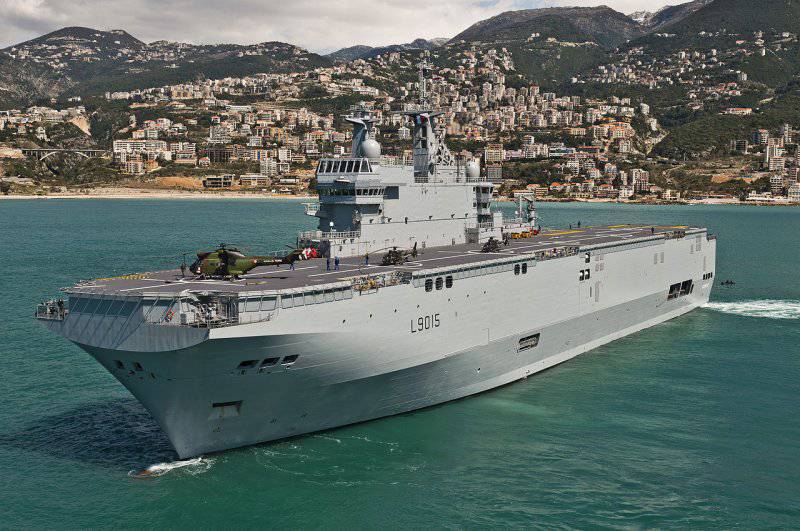 Dixmude (L9015) in the Gulf of Junia (Lebanon)
"Mistral" is simply charming. Automated "all-electric vessel", requiring minimal logistic support. Universal "democratizer", capable of urgently delivering a battalion of marines, equipment and equipment to any region of the oceans. Cargo ramps, speedboats and helicopters.

Equipped hospital area 750 square. meters with the possibility of increasing the modular principle, at the expense of other spaceships. If necessary, the 100 man of the medical staff in the 12 operating rooms can be provided.

The most advanced means of detection: a three-dimensional radar Thales MRR-3D-NG, which provides control of the air situation in the radius 180 km from the ship. Or an infrared search-and-sighting system "Vampir NG", capable of detecting and taking on escort low-flying anti-ship missiles and speedboats at any time of the day and in all weather conditions.

"Mistral" really cool ship, a real step forward at the level of accommodation of the crew and landing force. The latest electronics and control systems, spacious flight deck. Roomy holds and comfortable mats. This helicopter assault landing dock of the XXI century.

BDK provides transportation and disembarkation of a motorized rifle battalion, including the 440 man and 79 units of equipment (armored personnel carriers, infantry fighting vehicles, tanks, cars, etc.). In the absence of amphibious assault vehicles in the docking chamber, the "Rhino" can take on board a tank unit with 46 main battle tanks. Autonomy - 15 days in transit 500 paratroopers or 30 days in transit 250 paratroopers.

Nasal gangway length 32 meter with hydraulic drive. The landing with non-floating equipment can be carried out directly on an unequipped coast at a ford depth at noke gangway of no more than 1,2 m. According to statistics, the BDK Ave 1174 can provide landing with the help of a nasal gangway at 17% of the coast of the World Ocean.

Cargo ramp for receiving and landing troops on the equipped pier.

For unloading of non-floating equipment without approaching the shore, six amphibious boats of the 1176 Ave. (1 MBT capacity, 10-11 speed knot.) Or three high-speed amphibious assault boats of the 11770 Aeronautical Serna (speed up to 27 knots with a swell 3 score).

Aviation armament: two helipads with refueling systems; up to 4 Ka-29 transport and combat helicopters can be based on the ship.
Also, "Rhino" is equipped with a system for receiving liquid and solid cargo in the sea. 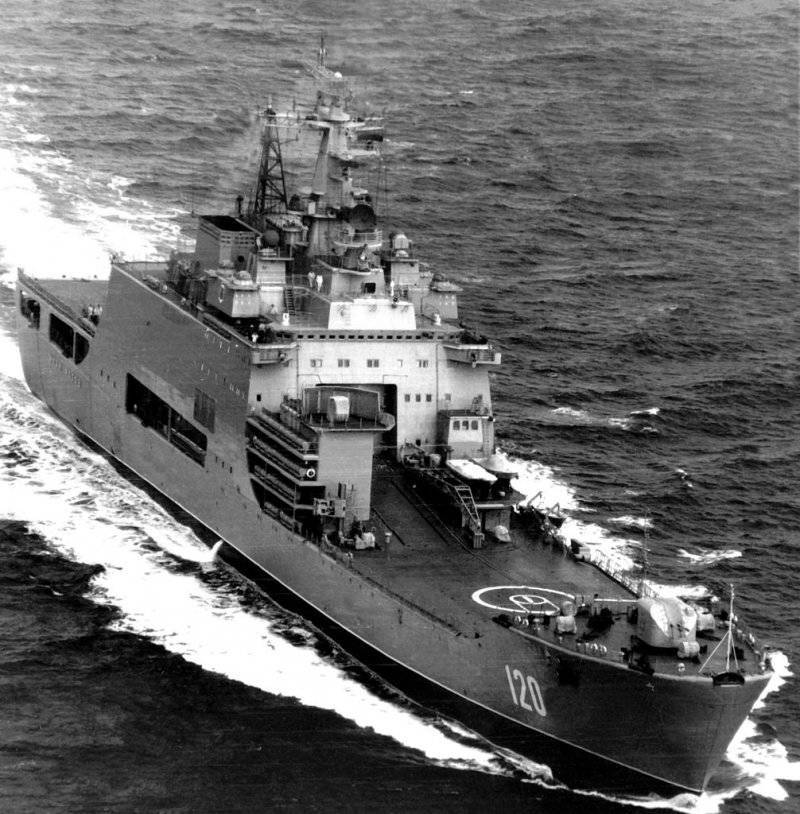 Back in 1978, the Soviet Navy received a unique marine equipment - an unparalleled universal landing craft capable of landing marine units both directly onto an equipped or non-equipped shore, and without approaching the coast: floating equipment - directly to the water, non-swimming - to deliver to land on landing boats. At the same time, the personnel of the landing force could be delivered to any place on the coast with the help of transport and combat helicopters on board.

However, the role of "Rhino" was not limited only to the delivery and landing of troops - if necessary, the ship could provide the Marines with solid fire support: two installations of Grad-MRLS (2 x 40 guides 122 mm, reload time - 2 minutes) and nasal 76 mm AK-726 twin guns. There was even their own SAM "Osa-M"!

Unlike the beloved Mistral, the Rhinoceros BDK does have less autonomy and less efficiency when conducting amphibious operations on the other side of the Earth. But was it important? At one time, the Soviet Navy had naval bases and logistics points around the world - from Vietnam and Cuba, to Somalia. As for the modern Russian Navy, our sailors clearly do not have to land in French Polynesia - the higher autonomy of the Mistral will remain unclaimed. In other words, in terms of cruising and autonomy, the Mistral in the Russian context has no advantages over the old BDK project 1174. 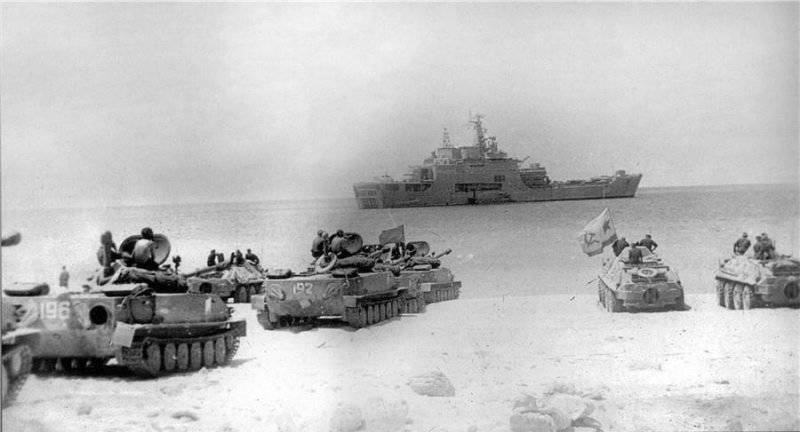 The capacity and capacity of the Mistral is naturally greater — it is X times larger than the Rhinoceros. But is the advantage of the French ship so noticeable? Advertising leaflets claim 1,5 units of vehicles onboard the Soviet BDK and 120 units of equipment on board the Mistral.
But, it is important to understand that a warship is not a means to haul supported cars from Japan. Paratroopers going into battle require a well-defined technique - TANKS. Practice shows that without the support of heavy armored vehicles, engaging in combat is problematic and dangerous. Landing party necessarily need MBT.

How many main battle tanks fit aboard the Mistral and the Rhinoceros?
The answer is paradoxical: the same! On average - one battalion in the 40 MBT. It seems that not every cargo deck on the Mistral can withstand the weight of an 50-ton combat tracked vehicle. However, in this case, the "Rhino" will also have trouble - will have to abandon the landing craft, placing the tanks in the empty dock chamber.
(There are various pessimistic assumptions that the maximum number of OBTs on board the Mistral cannot exceed 5 ... 13 units - tanks are placed on the ground in front of the docking chamber and directly on board the landing craft. The rest of the decks and ramps of the French ship have a mass limitation of armored vehicles - no more than 32 tons)

As for aircraft armament, the domestic BDK, of course, is a clear loser: there are fewer landing sites in 3, only four helicopters. However, what does it matter in real life? - for a real amphibious operation, it is required TENS times more rotorcraft. Let us take as an example the Falklands conflict - a local sea battle on the edge of the Earth. However, the operation involved ... 130 British helicopters! 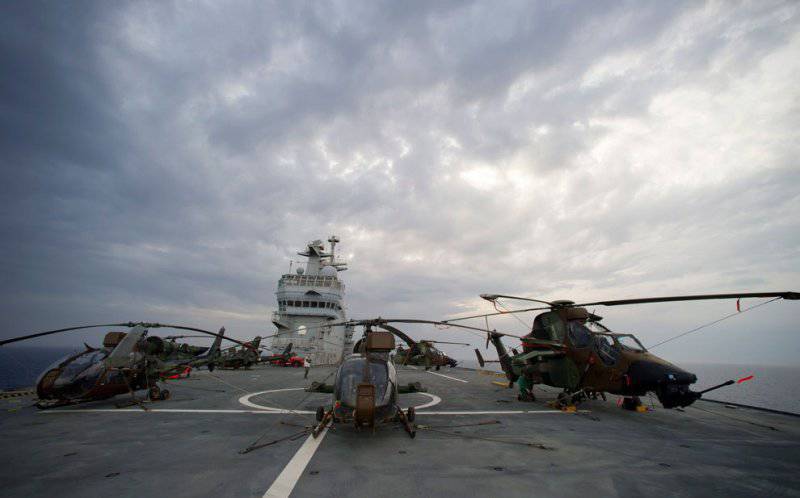 The Soviet landing ship has its important advantage - a solid built-in armament complex. Weight weaponsinstalled on board the BDK, exceeds 100 tons - “Rhino” is bristling from all sides with missile launchers and artillery barrels.

Of course, no one harbors illusions about the combat capabilities of the outdated Osa-M SAM ... but what prevents you from dismantling the complex and putting something else in return? For example, the compact shipboard SAM "Shtil". Not satisfied with the AK-26 726-ton Artillery? Change it to a new A-192 larger system. And what prevents to install the AK-630 rocket and artillery complex "Palash" instead of the battery "metal cutters"?
Finally, Grad multiple launch rocket systems. Even after half a century, the legendary weapon remains one of the most deadly missile and artillery systems and hardly needs to be replaced.

You will say that this is a very expensive proposal, a radical revision of the Rhino project will be required ... well, so well, it is planned to spend 800 million euros for the purchase of each Mistral. There is confidence that half of this colossal amount would be enough to modernize the old Rhino BDK.

As a result, we observe an interesting situation: based on the realities of the Russian Navy, the old Soviet BDK corresponds to its overseas competitor in most of the stated characteristics. Moreover, the "Rhino" is much preferable when performing the main task of the amphibious ships - delivery to the coast of heavy equipment and armored vehicles (ordinary container carriers and destroyers can do the rest). Unlike the Mistral, it does not need to waste time moving tanks from cargo decks to landing craft with their subsequent unloading to the coast. Filling the dock with water, mooring boats ... too long and time consuming operation. 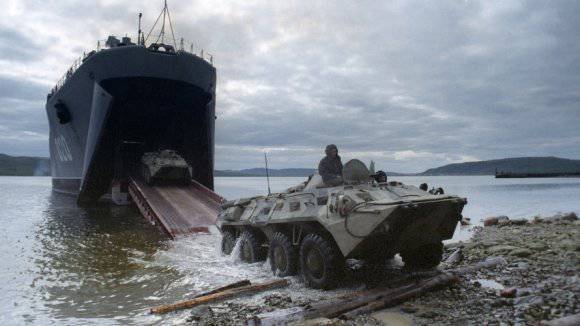 "Rhino" just come to the shore, stuck into the sand nasal gangway and landed technology under its own power. Do not be afraid of statistics that only 17% of the coast of the oceans is suitable for landing through the bow of the BDK (suitable bottom slope, the nature of the soil, etc.) - in reality this means hundreds of thousands of kilometers of coastline. You can always find the right place.

***
However, it’s not even the number of guns and tanks aboard the Rhino or Mistral. Those articles on the national economy that the author was able to read clearly indicate: the most profitable investment is investment in own production. Protectionism, protection of domestic producers, customs barriers - all this is a real confirmation of this theory.

To avoid unhealthy associations, we note that the following passage does not apply to Rhino.
Sometimes it doesn’t matter that the domestic technology is inferior in its performance characteristics to foreign analogues - the main thing is that it was built in Russia. Domestic shipyards and factories loaded with work, increasing the welfare of the population. Simple, intuitive conclusions.

But what happened in reality? The interests of the sailors were in last place. BDK "Mitrofan Moskalenko" went to the nails. His colleague, Mistral, became a bargaining chip in the geopolitical game, a kind of payment for Russian-French cooperation. 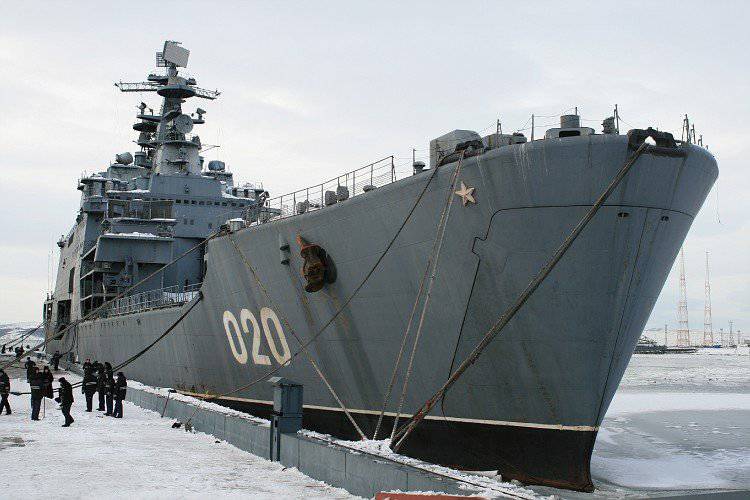 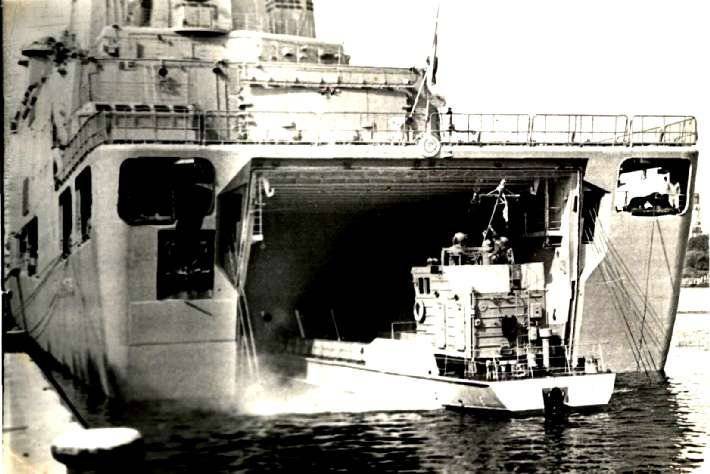 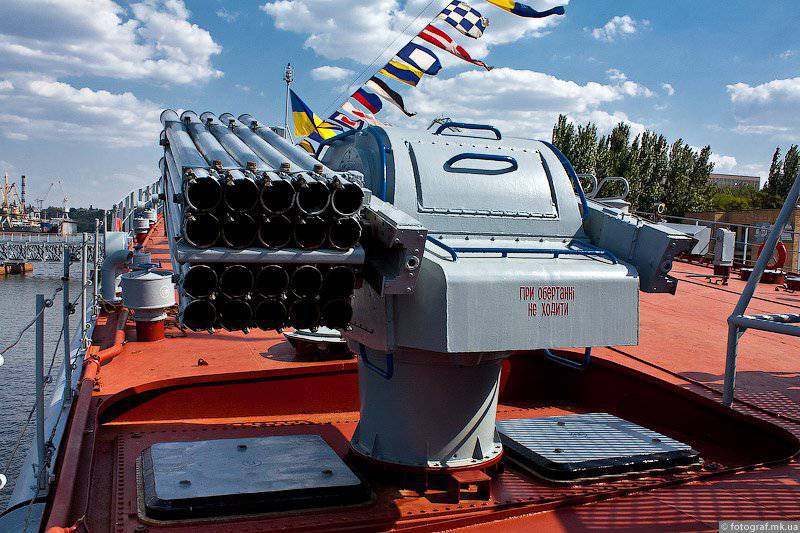 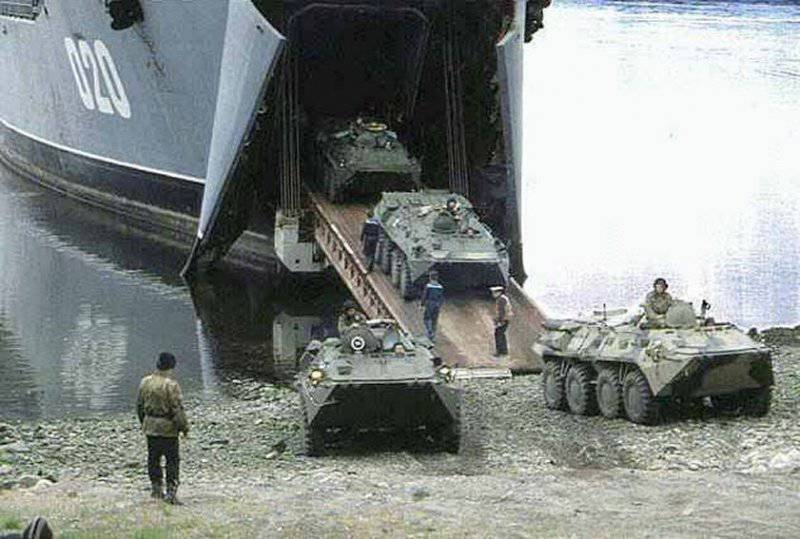 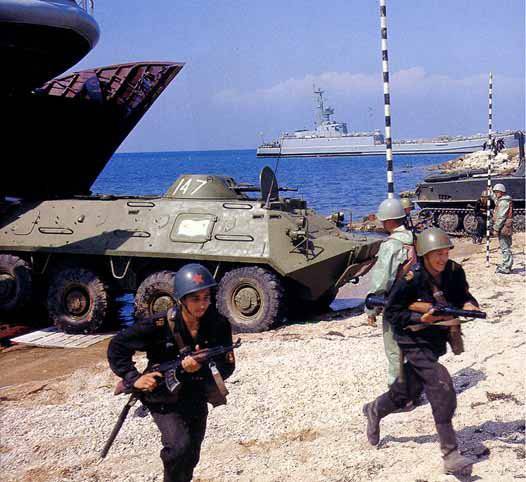 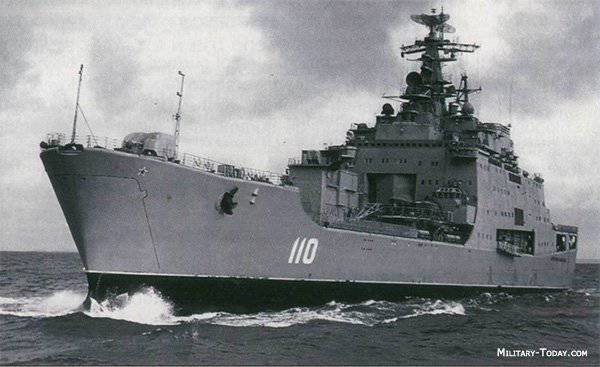 Ctrl Enter
Noticed a mistake Highlight text and press. Ctrl + Enter
We are
Large landing ships of the Russian fleetMistralnaya epic: failure, reprimand and "Rhinos"
125 comments
Information
Dear reader, to leave comments on the publication, you must to register.