April 23 2013
61
The company "Tsar-gun" has long ceased to exist, but the memory of the products still remains. It is also interesting where exactly Lobaev works now, and whether he works with weapons at all. In general, having slightly digged the worldwide network, we managed to reach the TAWAZUN company, and from it to find the subsidiary TADS, with which Lobaev now works, making a new weapon. All the same high-quality high-precision sniper rifles, which are not much to say, because the weapon is often as simple as a shovel, but I think you can squeeze a couple of words and pictures. 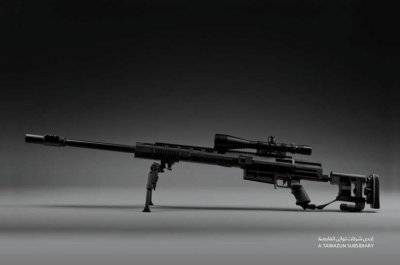 I would like to start with a self-loading rifle, which was named SAR-338. The manufacturer’s website contains the main feature of this weapon in the form of using .338CT cartridges, but I haven’t found any information on them. In general, this is either a new ammunition based on .338LM, or a mistake in general, so if there is information on this ammunition, then please share. Based on the information from the company's website, I concluded for myself that people in the UAE work very secretive. There is absolutely no information on the site about the dimensions of the weapon, nor about its weight, let alone to reveal the secret of the automatic weapon operation. The only thing that has been said about this rifle is that despite its self-loading, it can be fired from a distance up to 2000 meters at a chest target. Such accuracy is achieved thanks to a clever recoil damping system, about which no one wants to say anything, as well as ammunition. In my opinion, it is possible to fire even for three thousand meters, the only question is whether it is possible to get into something.

The basis for the weapon was SAR-40, about which also little is known. On the basis of the fact that the manufacturer positions the weapon as a high-precision one can immediately drop the automation systems with a short and long stroke of the barrel, it should be fixed. Accordingly, only the automation system with the removal of powder gases from the bore remains, but I will not argue. It feeds weapons from the detachable box magazine with a capacity of 5 cartridges. As usual, everything is hung with fastening straps for additional devices, which is already a kind of norm for modern weapons. Adjustable height folding bipods attach to the bottom bracket. We should also note that the installation site of the bipods is not fixed, which can sometimes be useful for the most comfortable use of the weapon. The rifle butt is adjustable in length and has a third “leg” in its lower part. To combat the recoil of the weapon when firing, in addition to the wildly secret recoil system, there is a rather large muzzle brake-recoil compensator. In its place can be installed a device for silent shooting, judging by the photographs, which also confirms the guess about the automation system with the removal of powder gases. In general, it turned out something interesting and unknown, from which it becomes even more interesting. 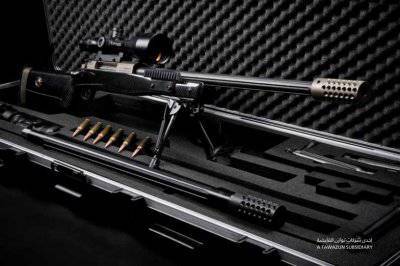 The following sample is already a real work of art, fell in love at first sight, despite the fact that the characteristics are also unknown. However, what can be the characteristics of a high-quality “bolted” large-caliber sniper rifle? I think that no worse than the other types of weapons chambered for .50BMG. What is captivating in this weapon is that it has found the golden mean between beauty and functionality. I do not argue that the weapon with the appearance of the terminator is also beautiful in its own way, but for me personally, the classic butt and bed is much nicer. Despite this, the TSR-50 rifle boasts all the same four attachment plates for additional devices, which have recently been obsessed with.

Butt but if it is regulated, then, apparently, only by lining the pad plates under the butt pad. However, taking into account the fact that the cost of this weapon is off the scale, it is possible that it will be adapted to its owner during production. The folding bipods adjustable in height are mounted on a picatinny-type mounting bar, two more mounting bars are located on the sides and one for the telescopic sight on the receiver of the weapon. It is interesting that in the description of this weapon on the manufacturer’s website there is a line stating that the mounting bar itself can be raised vertically for corrections to 20 angular minutes, if I understood correctly. The recoil of the weapon when firing copes with a massive muzzle brake-recoil compensator, which, in my opinion, is not the most successful. Looking at him, you immediately pay attention to the holes in the upper part, the flame from which when fired will be guaranteed to blind the shooter.

The TSR-30 sniper rifle is already a more modern weapon, well, at least by its appearance, it is also produced for a wide variety of cartridges in .338 and .300 caliber. Again, the weapon is not self-loading, reloading is done manually. On the forearm of the weapon, four picatinny-type attachment strips are installed, the side can be removed quite easily, which leaves not the most beautiful holes. Upper and lower mounting brackets fixed. Bipods are attached to the bottom bracket. Installation of the device of silent shooting is possible. The stock is adjustable in length and height of the cheek support. In general, the usual high-precision "bolt" about which I want to say, but nothing.

But the next sample is very unusual. The KS-11М sniper rifle is positioned by the manufacturer as a multi-caliber with an easy change of barrels and bolts, but this is not interesting. Having unscrewed the contrast to the maximum on the monitor, I could not find a handle on the single photo of the weapon to hold. It is doubtful that they have forgotten about it, since instead there is a protrusion on the butt. In general, looking at this weapon, there is, where a sick fantasy is about to roam. You can see that the butt is quite voluminous and has a cutout, judging by which we can assume that the gun shop is located in the butt, which is open when the shutter is closed, that is, we can talk about the layout of the bullpup. I do not pretend that this is the way it is, but I personally do not see any other use for this cut. Taking into account the fact that the weapon is not quite usual anyway, it is quite possible that it could be equipped with such an open magazine.

Summarizing everything written above, I would very much like to hope that the company will pay attention to the fact that practically nothing is known about their weapons and at least will lay out the weight and size characteristics, at least just for interest. Yes, and about the specific technical features would be quite nice to know. Whatever one may say, but Lobayeva will still be remembered by us for a long time, so there is no need to hide such products, behind one photo and a couple of lines, suddenly there will be solvent customers in Russia.

Ctrl Enter
Noticed a mistake Highlight text and press. Ctrl + Enter
We are
Lobaev Corporation and its precision riflesNew rifles V. Lobaeva
61 comment
Information
Dear reader, to leave comments on the publication, you must to register.