American request led to a conflict between the Chechen and Ingush security forces?

April 22 2013
84
While the US continues to look for Caucasian tracks of terrorist attacks in Boston, one way or another, trying to shift the blame for the incident, including to Russia, strange things are already happening in the North Caucasus Federal District of the Russian Federation. The oddities were expressed in the fact that the Chechen and Ingush security forces again did not divide the territory in which they were to carry out their operations. 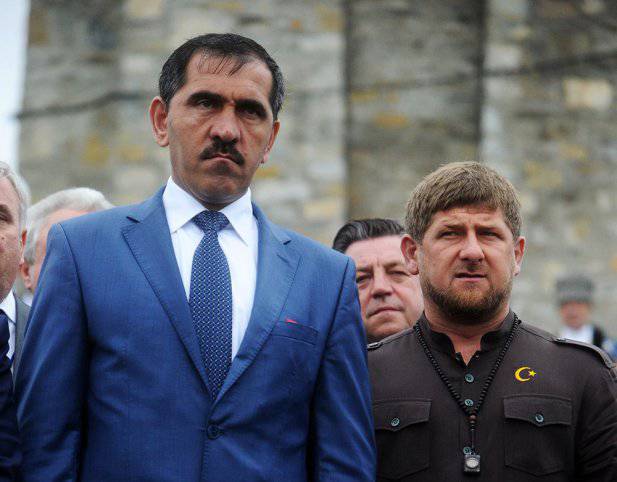 The conflict broke out due to the detention on the Chechen-Ingush administrative border (which, by and large does not exist) a column in which, according to information provided by officials, Deputy of the Russian Parliament’s lower chamber Adam Delimkhanov, deputy head of the Chechen Interior Ministry Apta Alautdinov and several dozen representatives of various law enforcement agencies of the Chechen Republic. What was the purpose of the “Chechen” column with officials moving to Ingushetia, and what prompted the local security forces to stand in the way of this column?

According to the Ingush side, a convoy in military vehicles, an armored troop-carrier and several passenger cars were sent to the village of Arshty. Mostly ethnic Chechens live in this village, located on the territory of the Republic of Ingushetia, and allegedly “guests” from Chechnya headed by Deputy Delimkhanov were going to arrange a mass gathering of the Chechen population in Arshty. The gathering, according to the very same Ingush side, should have been aimed at agitating the local population for separating the village from the Sunzha region of Ingushetia. Information, frankly, seasoned with a certain sharpness ...

As soon as the convoy was about to cross the subtle border between Chechnya and Ingushetia, the Ingush security forces detained her. The reason for the detention was indicated as follows: they say, if you already decided to visit the Ingush lands, then you need to come without weapons and especially on civil engineering. And if you are also an armored personnel carrier with you, "grabbed", then we allow ourselves to take radical measures. As they say, we had to temporarily even forget about Caucasian hospitality ... Forget it thoroughly! So, stopping the column with the deputy Delimkhanov led to the open skirmish of the security forces of the two North Caucasian republics. First, firing into the air began, and then it came to melee. As a result, 11 people received injuries of varying degrees of severity, and two Ingush police officers had to be hospitalized as a matter of urgency.

The head of Ingushetia, Yunus-Bek Yevkurov, immediately after the “border” conflict, made a statement in which he called the actions of the Ingush security officials correct and severely criticized the desire of the authorities of the neighboring republic to cross the borders of Ingushetia without coordination with the local authorities. In addition, Yevkurov noted that all Ingush police officers who took part in blocking the column are worthy of encouragement, the decision about which will be made soon.

After such words, the head of Chechnya, Ramzan Kadyrov, could not remain indifferent. He stated that the Ingush authorities shamelessly distort information about the goals of advancing a column with Chechen security forces towards the village of Arshty. According to Kadyrov, information was received in Grozny that a band group headed by Doku Umarov was allegedly observed in the Sunzheysky district of Ingushetia. To lead the operation to catch one of the leaders of the Caucasian gang-underground, again, allegedly, and should Delimkhanov. By the way, Adama Delimkhanov only last year, the United Arab Emirates Prosecutor General’s Office stopped searching through international channels on suspicion of the murder of Sulim Yamadayev ... 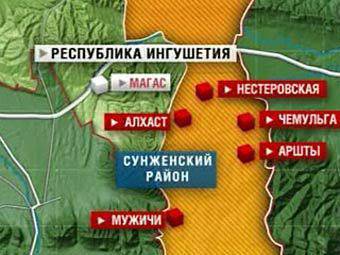 It is noteworthy that at the very time when Ramzan Kadyrov announced the possible presence of Doku Umarov on the territory of Ingushetia, in the USA they spoke about the possible connection of Umarov with the Tsarnaev brothers, one of whom (Dzhokhar) was detained on suspicion of preparing and committing recent Boston bombings. It was from the United States to Grozny that the request came to verify possible contacts between Umarov and Tsarnaev.

What kind of information did American security officials want from the Russian republic, the head of which, according to some sources, ended up in the so-called secret part of Magnitsky's list? - an interesting question. So entertaining as the response from Grozny to Washington received an appropriate one. From the Chechen capital, the American "partners" were told that the only Tsarnaev, known from the "bad" side in Chechnya, was a man who did not pay the fine for violating traffic rules in 2012 in the year, and it is unlikely that he could go to Boston to commit terrorist acts ...

In general, it seems that Magnitsky’s list is starting to go sideways with the American authorities ...

Let us return, however, to the conflict that occurred between the Chechen and Ingush security forces. So, Ramzan Kadyrov declares that Delimkhanov and the company moved to Ingushetia to begin the operation to liquidate Doku Umarov, who allegedly was in Ingushetia at that time. And the Ingush authorities, they say, did everything to prevent the counter-terrorist operation of the Chechen security officials. In fact, Kadyrov blamed the Ingush authorities for covering up the terrorists hiding in Ingushetia, or, at least, decided to focus on the weak, in his opinion, Ingush leadership’s anti-terrorism competence.

Having heard this, representatives of the Ingush authorities could not keep silent. The representative of the Security Council of the Republic of Ingushetia said that the Ingush police officers were forced to block the path of the convoy moving from the territory of neighboring Chechnya, because the quote: "our police do not know who is invading our republic, it could have been militants." According to him, “the Chechens were still lucky,” because the Ingush security officials did not open fire.

In general, as they say, word for word ... As a result, the situation has caused a real resonance not only on a regional scale, but also on a nationwide scale. Now the skirmishing of the Chechen and Ingush police officers became interested in the central office of the Ministry of the Interior, as well as in the plenipotentiary of the President of the Russian Federation in the North Caucasus Federal District. Alexander Khloponin took control of the investigation.

It is noteworthy that this conflict between the power structures of the two republics is not the first in a row, but it is the first in the presence of victims. It is obvious that the subsequent ignoring of the complexities of the question of a clear designation of the Chechen-Ingush administrative border can also provoke more fierce skirmishes. The problem needs to be solved, and preferably, as they say, just yesterday ... And it is time for Kadyrov and Yevkurov to step over personal ambitions and talk in a language that is understandable to each other about how to organize the struggle for regional security with joint forces.

Ctrl Enter
Noticed a mistake Highlight text and press. Ctrl + Enter
We are
Oddities of the work of the program to resettle compatriots in the Russian Federation (journalistic special report)
84 comments
Information
Dear reader, to leave comments on the publication, you must to register.