Georgian G-5. I have already seen it somewhere

April 22 2013
209
About a year ago, a new self-developed automatic rifle under two names was introduced in Georgia: G13 (in the process of developing weapons) and G-5 (final version). This weapon was presented as a completely independent development of Georgian gunsmiths and almost became a national pride. In general, from the light hand of journalists, quite far from handguns, this machine gun was made almost the weapon of the future. Let's try to figure out what kind of beast this G-5 is, although I think those who are at least a little interested in weapons have already understood everything from the photo of this product. 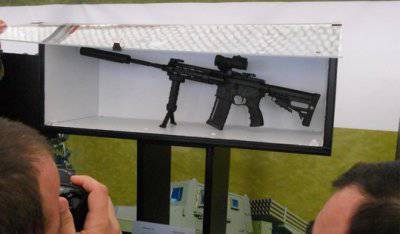 First of all, we should immediately say that this weapon is actually produced on the territory of Georgia, and everything until the last screw is made by Georgians' hands, well, except for arms stores, since it is cheaper to buy them separately than to establish production. From this point of view, weapons can really be called Georgian. On the other hand, the production of this rifle is carried out under a license obtained from the company Heckler & Koch. And here in this place all doubts that the weapon may be just outwardly similar to one of the very good models of modern weapons, disappear. Indeed, G-5 and NK 416 are very close relatives, one can even say that the weapon is identical to each other, but there are some differences, we will not offend those who are in happy ignorance, let them rejoice at the genius of the Georgian arms industry.

Despite the fact that G-5 is actually a licensed copy of NK 416, one should not underestimate the fact that it is very difficult to develop weapons production, even if all the technical documentation is fully provided, so it is possible to treat this achievement differently. Personally, I would be much more pleased that a new weapon has appeared, no matter what nationality, because any sample, one way or another, pushes the development of firearms further, even if the result is unsuccessful. Here we see the production under license. To someone else, only domestic achievements are important, and because of the general political picture, the appearance of a new model in Georgia itself would clearly not be a joy to him. news, in general, not in the jungle, I got something, back to the weapon itself.

The weapon was awarded a barrel length of 370 millimeters, while the total length of the weapon is 840 millimeters with the maximum extended butt and 756 millimeters with the shifted. The weight of the machine is about 3,5 kilogram. As it is not difficult to guess, the machine gun is powered by 5,56x45 cartridges. The appearance of the weapon is somewhat different from the original HK416. First of all, the handle catches the eye with recesses under the fingers, the butt also has several cosmetic differences, but in general, the appearance of the weapon remains the same. The forend consists of four picatinny-type mounting strips assembled together for mounting additional sighting devices and other additions such as an additional holding handle, a flashlight, and so on. The open sights are folding, removable, so it’s too early to talk about how they will be, since you can put any comfortable ones on. The switch of the fuse and the translator of the fire modes are located above the pistol grip of the weapon, which has recently been considered the most convenient location for it. The machine feeds from detachable box stores with a capacity of 30 cartridges. 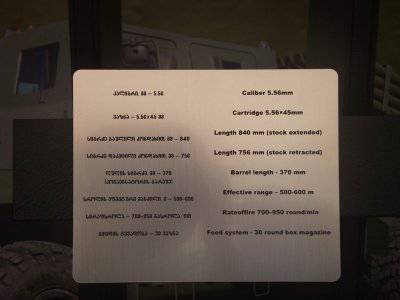 Automatic weapons built according to the scheme with the removal of powder gases from the barrel with a short piston stroke. The gun’s rate of fire equals 700-950 per minute. In order to compensate for the impact of recoil on the effectiveness of shooting and make the use of weapons more comfortable, the slide frame of the machine has a recoil buffer. Separately, it is noted that a silent and flameless device was developed for a weapon, however, it is not known whether it has foreign analogs either.

It is noteworthy that the weapon has already been put into service, but so far only a few have managed to “touch” it with their hands. Perhaps, delays in the supply of weapons are associated with some problems in production, and it is possible that they are accumulating a number of machine guns in order to re-equip the whole army in one day, and we can expect that from them. In any case, the production of virtually HK416 on the territory of Georgia is established and soon the weapons will appear in the military. We will live and see how well the Georgians will succeed in repeating the German quality, although if I had money for a license, I didn’t stint on the production either.

Ctrl Enter
Noticed a mistake Highlight text and press. Ctrl + Enter
We are
Tribi 14 Charging Automatic RifleFG42 - automatic rifle in service with the Third Reich
209 comments
Information
Dear reader, to leave comments on the publication, you must to register.