President of Syria - the evangelist of the coming victory 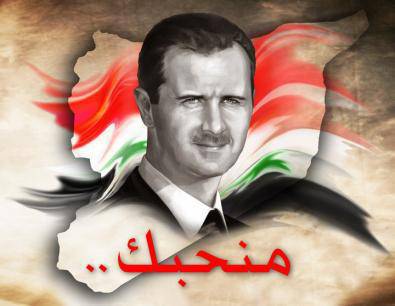 In many countries around the world, a wave of solidarity with Syria, dedicated to Independence Day, swept. Even on another continent, in distant Cuba, students at the University of Havana collected signatures under a letter of solidarity, signed by boys and girls of many nationalities who came to study in the Cuban capital. The Syrian community of Bulgaria with the support of the citizens of this country appealed to the Syrian army with a welcome letter, where people from the Slavic country wished the soldiers victory over terrorism and the forces of the new colonialism.


In many Syrian cities, there were motor rallies in support of the legitimate government. The military and security forces held solemn assemblies, exercises and other patriotic events.

Syrian President Bashar Al-Assad addressed the people through the Syrian television channel Al-Ihbariya, giving his journalists a detailed interview.
He congratulated the Syrians on Independence Day - the 67 anniversary of the withdrawal of foreign troops from the country. Comparing the situation then and now, the head of state noted that today the forces of colonialism are again trying to implement their anti-Syrian plans, but they are acting by other methods. He said that real independence is independence of political decisions, and not just the absence of foreign troops. “If the land is occupied, but its people are free, this is much better than a formally free land, but a people who have lost their sovereignty and are deprived of the right to make patriotic decisions.”

I would like these words to be heard and perceived by the leaders of many states, who are much larger and seemingly more powerful than Syria in their capabilities, but for some reason they are afraid to make independent decisions!

“When we were children, this holiday meant a lot to us, and we felt pride. Today we must preserve this spirit for the sake of glory and true dignity, ”he said.

The President noted that today the United States does not accept the independence of even the countries of Europe, and Europe, in turn, wants submission from the countries of the so-called “third world”. Syria occupies a very important geopolitical position; therefore, the new colonizers, guided by their traditional policies, want to control it. These countries play a very important role in what is happening, supporting the militants from the very beginning.

Now these forces are trying to stir up religious strife in Syria. Bashar Al-Asad recalled that back in the early 80s there were forces that also tried to provoke interfaith strife, but then these ideas did not find any support in society, and such attempts were quickly managed. Now they are trying to do the same thing again, but the Syrian people are quite conscious, therefore they have been holding together for two years, and despite such plans, they demonstrate unity. For example, the president said that when the prominent religious leader Muhammad Said Ramadan Al-Buti died, it became a tragedy for representatives of all faiths, all segments of Syrian society - not only Muslims, but also Christians and all others. This means true national unity.

When the reporter asked the head of state about the so-called “liberated” territories, which the media are hostile to Syria, and about the tactics of the army, they said that the situation militarily differs from the situation if the country was at war with the traditional enemy. The traditional enemy occupies a part of the territory, after which patriotic forces enter into battle, expelling the enemy. But now the situation is different. This is a new style of war. Syria deals with the activities of terrorists in cities. Some of them - local, many - from other Arab countries and even from distant states. They conduct terrorist attacks and sabotage in many parts of the country.

“Now we are in the process of exterminating terrorists,” said the president. - At the very beginning, the armed forces drove the terrorists out of the city, sometimes it took several hours of work. But if you do not destroy the terrorists, then it does not make sense to liberate any region in Syria. ”

He added that the priority for Syria is always a humanitarian point of view. It is necessary to protect the lives of citizens and alleviate their suffering.

Statements by some politicians and the media are not a priority. The main thing is to save the citizens, even at the cost of the fact that the mass media will talk about the victories of the terrorists.

Bashar al-Assad sharply criticized the policy of the Turkish government. He noted that when Erdogan went to power, one of his slogans was “Zero problems with neighbors”. However, in practice, this resulted in the words “Zero of political vision, zero friends, zero authority”.

He also criticized the two-faced policy of Jordan. On the one hand, officials of this country say that it does not provide any support to terrorists. When Syria unofficially sent a representative to ask if there are training camps for militants in Jordanian territory, and to warn against their danger to the entire region, everyone with whom this representative met categorically denied such information. However, in fact, it turned out that shortly thereafter tensions began again in southern Syria, in the province of Daraa, not far from the Syrian-Jordanian border.

He pointed out that, on the one hand, Jordan says that it does not supply weapon the militants in Syria, and in fact many terrorists penetrate from there. On the other hand, the Jordanian authorities arrested anyone who tried to send any assistance to the Palestinian resistance.

ATS President noted that the United States uses the term "humanitarian intervention." However, examples of how these words were put into practice were seen by the whole world. This was especially vividly manifested in the actions of Israel against the Palestinian people, in the US war in Vietnam and Korea, where several million people died, in Iraq and Libya. And now - in Syria.

When the correspondent of Al-Ikhbarii asked why, despite all the difficulties, Syria has been standing for more than two years, whence the state has such power and perseverance, the head of the SAR answered that the main factor is people.

“It was not the state itself that sustained, but its citizens. This great nation holds on for two years. Many people do not know what the scale of the attack is, but they felt its consequences. However, they survived, and this is a fact. This is the essence of Syria. If not for her people, the state would have collapsed in a few weeks. ”

He added that in the same way, the resistance in Lebanon in 2006 was based on his people. It is the resilience of citizens that is the main factor in each country. And Syria is no exception.

At the end of the interview, the president was asked how optimistic he looks to the future.

Bashar al-Assad replied that without optimism in Syria it would have been impossible to fight. Especially optimism can be drawn from ordinary people, including those who have lost their loved ones.

“I personally met citizens. Especially - with the families of the victims. These are families of real heroes. When you sit next to your mother, father, brothers, sons of the fallen, and they say that their family has given one martyr and is ready to give others, this is unlimited patriotism. This is what motivates us to be optimistic. ”

The president concluded his word to the people as follows: “We have only one choice - it is a victory. If we lose, the state will end. I do not think that this is an acceptable option for any citizen of Syria. "

... It remains to add that the name Bashar in Arabic means "a person carrying the good news." On one of the most sacred holidays of Syria, its president became the evangelist of the coming victory.

Our projects are looking for authors in the news and analytical departments. Requirements for applicants: literacy, responsibility, efficiency, inexhaustible creative energy, experience in copywriting or journalism, the ability to quickly analyze text and check facts, write concisely and interestingly on political and economic topics. The work is paid. Contact: [email protected]topcor.ru