The return of the Dagestan conscription. Disputes do not stop

April 22 2013
185
In Russia, the spring draft campaign of the 2013 of the year is already in full swing. According to the quotas determined by the state, the number of young people between the ages of 18 and 27 years, which should be called up to the army during this campaign, will be 153,2 thousands of people. This is on the 13 thousand more digits of the 2012 fall call of the year. True, at the same time almost a thousand 3 recruits fewer than during the spring draft last year. 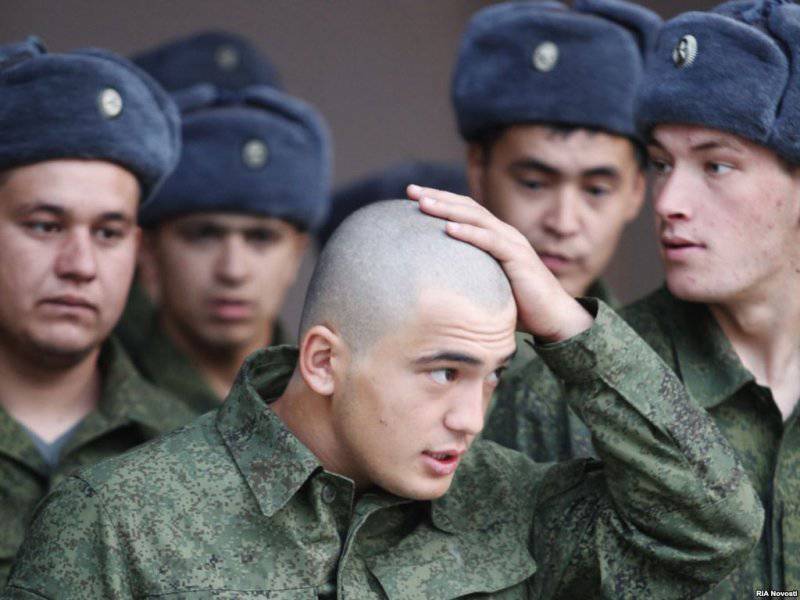 So far, the main, if I may say so, highlight of the draft campaign, which is launched in Russia, can be considered an increase in the draft quota for Dagestan youth. Now the state plans to carry out an appeal from Dagestan to almost eight hundred people. These, of course, are not the indicators that corresponded to those of the Soviet period, or, for example, the beginnings of the two thousandth, but the tendency for an increase in the number of Dagestan conscripts in the Russian army was manifested.

It is worth noting that the decision in the Russian law enforcement agencies (in particular, in the Ministry of Defense of Russia) to increase the “Caucasian quota” was made after a personal request to Sergey Shoigu on this issue was addressed to Magomedsalam Magomedov - a man who had already resigned Heads of the Republic of Dagestan. Magomedov asked the Minister of Defense to renew his call-up for Dagestani young people for military service in the Russian army in the same, let's say, volume. During the conversation that took place in December last year, Sergei Shoigu promised to consider this issue in a positive way for Dagestan and during the call-2013 to call Dagestan's recruits to the ranks of the Russian army around 4000. If we consider that the spring call concerns 800 Dagestan young people, then, by subtracting this number from 4 thousands, you can get 3,2 thousands of Dagestan recruits of the sample "autumn-2013".

Such an increase in the Dagestan call quota, the decision of which was made by Sergei Shoigu, caused a mixed reaction in Russian society. As usual, there were both ardent supporters and ardent opponents of this decision of the minister. The main slogan of the opponents is that in no case should the Dagestanis be allowed to serve in the Russian army, since they are supposedly the main degrading discipline among the troops - this is the time; that calling on Dagestan boys - preparing potential extremists and terrorists with the forces of the Russian army itself using the military budget is two. The main slogan of the supporters is that Dagestanis are the same citizens of Russia as Russians, Kalmyks or Tatars, and therefore it is necessary to abide by the constitution and be given the opportunity to send your military duty to any Russian male citizen who is not in disabilities.

Both camps continue to throw spears at each other and to defend their positions. And while this throwing of copies continues, information arrives from Dagestan that, with local district military enlistment offices, it has been decided to create so-called trusteeship groups that will directly monitor the service of recruits called up by this military enlistment office. The Dagestan authorities, and in particular, the acting head of the republic, Ramazan Abdulatipov, report that local elders, representatives of municipal authorities, spiritual leaders, as well as parents of some draftees are introduced into guardian groups. The work of such groups is reportedly reduced to the following: for each draftee from Dagestan is assigned a person responsible for him from the board of trustees. One person in charge may be responsible for several draftees. If from the military unit in which a called-up young man is serving, a complaint is received about the non-statutory relations with fellow soldiers that this soldier admits, the guarantor should immediately go to the place of service and, having figured out on the spot in the incident, help the commanders to rein in the fighter.

At the same time, representatives of the Dagestan authorities say that it is in this way that you can easily knock arrogance from a draftee who decided to follow the path of non-statutory relations. The reason is that for a Dagestan young man, coming to the place of service of a respected person from his own town (village) for censure will be, if not a shame, then a rather serious shock. And since respect for elders in the Caucasus is an indisputable truth, such a measure would allow the army education of Dagestan conscripts to be brought to an acceptable level. At least, that’s what the lawmakers in Dagestan themselves think.

It is worth noting that the Dagestan conscription itself was transformed significantly. Now, according to statements by local military commissariats, only the best of the best are selected to serve. From now on, a mandatory requirement for a Dagestan recruit is not only excellent health, but also the presence of a higher education with “recommendations” from teachers of the university where he studied.

All these conditions, which are simply unthinkable for most other regions of Russia, are introduced in Dagestan only because the failure to perform service in the Russian army blocks the way for decent employment for the young man. That is why the Dagestan youth so eager to go to the service. And if in other regions of the federation it is necessary to stimulate the very young people of military age for service in the ranks of the Republic of Armenia, then Dagestan (and in other North Caucasian republics too) there is almost a reverse trend. Not so long ago, there was information in the media that the parents of some Dagestan conscripts gave bribes to employees of military registration and enlistment offices so that they could help their children to be called up for military service - even through quotas from other regions. Someone will say that these are some tales, but this situation may seem to be a story in Moscow, St. Petersburg, Tula (yes, anywhere), except for the North Caucasus itself.

By the way, the Dagestan precedents with bribes for taking a young man into the army can be indicative of those who are sure that the Dagestanis (Avarians, Kumyks, Darghins, etc.) have nothing to do in the Russian army. The fact is that after the reduction of the quota for conscription from the North Caucasus (in some regions to, let's say, absolute zero), the number of guys of Caucasian nationality in Armenia, if decreased, is not total. The reason is the following: the same Dagestan guy a year or two before the onset of draft age with the help of material incentives for a certain circle of people could change registration with Makhachkala or Derbent, for example, for Stavropol or Kislovodsk. Here (Stavropol Territory) there are no any hard upper levels of conscription, and therefore a former resident of Dagestan found himself in the army as a resident of Stavropol, because to refuse people who want to serve in the army in most Russian regions is somehow not accepted ... After that, problems with employment after his return from the services were no longer as serious as those who could not get a military ticket with notes of service on conscription.

According to some information, it was in this way over the years of the “draft drought” in Dagestan that the inhabitants of this Russian region got into the Russian army in the hundreds. And this is a kind of corruption market, which has grown on the declared desire to save the Russian army from the "Caucasian lawlessness". As they say, they wanted the best ...

The return of the call of the Dagestan youth to the army from Dagestan itself can partially destroy this corruption scheme. But not completely ... Obviously, among those who want to do service in the Dagestan boys, the vast majority have no higher education. This means that a new loophole appears, to which local authorities should pay attention. We are talking about fictitious documents, allegedly confirming the receipt of higher education. If the Dagestan authorities will be able to restore order here, then this can be called a significant success.

Well, now to the question of calling for Caucasian young people for military service, Moscow itself is preparing potential militants, who allegedly immediately after the army grab for weapon and go to the mountains. This opinion, of course, deserves attention, but at the same time it does not hold water. In fact, the situation looks exactly the opposite. It is precisely those representatives of Caucasian youth who are closed the way to the RA and, accordingly, a good job in the region, can go to the mountains in search of “other happiness”. They can be blamed for this as much as they want, but if the state itself suddenly declares that it refuses their services, and almost directly confirms that it fears the participation of Caucasian youth in the full-fledged life of the country, then this youth remains to be done ... there is no perspective, and even the Constitution does not apply to them, because, you see, some of the commanding fathers cannot, forgive, use their resources to restore order in the unit entrusted to them.

By the way, where did the opinion come from that literally every second citizen of the North Caucasus who served in Armenia subsequently adjoins the militants? Obviously, this information is at the level of gossip, since no statistics on this issue have been made public. And based on speculation - at least naive. And, by the way, for some reason, few people remember that it was Dagestani residents in 1999 who actively resisted the spreading infection of international terrorism in their republic, actually standing shoulder to shoulder with the Russian soldiers, stopping the terrible tendency of rejection of the Caucasus from Russia.

It turns out that a complete rejection of the Caucasian appeal is the direct push of the Caucasian youth on the path to extremism. Therefore, the resumption of conscription of recruits from the same Dagestan can be considered a truly positive moment.

Ctrl Enter
Noticed a mistake Highlight text and press. Ctrl + Enter
We are
An autumn draft campaign started in Russia. Call features in 2015 yearThe Russian army is in dire need of conscripts: the spring call can double and become a record for violations
185 comments
Information
Dear reader, to leave comments on the publication, you must to register.