Soyuz with six satellites will leave from Baikonur 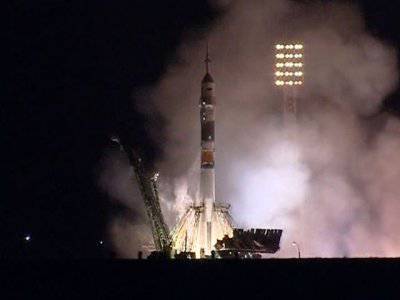 The Soyuz launch vehicle will start from Baikonur on Friday 19 April - it will launch six satellites into near-earth orbit. Among them is the Russian "Bion", which flies a zoo - fifty mice, geckos, snails and microorganisms. They will stay in space for about a month. Then the animals are examined by scientists. This will help improve protection for the crew that will travel to Mars.


"These are the five cells where the mice will live, this is for gecko lizards," shows Yulia Borisova, Leading Design Engineer of the RSC "TsSKB-PROGRESS" ..
The Bion-M1 spacecraft is the real Noah's Ark. 45 mice, 15 gecko lizards, Mongolian snails, as well as fish, plants and seeds are sent to orbit under the constant supervision of video cameras. A large experiment is being prepared to study the effects of weightlessness on living beings.

"These satellites to determine how our body adapts to the conditions of weightlessness, and understand what it takes to survive during long flights," says Valery Abrashkin, head of the TsSKB-PROGRESS RCC.

In the previous generation of the "Bion" monkeys - rhesus monkeys - have already paved the way for people in space. The data of those studies allowed to develop a complex of protective drugs and exercises for the crews of the Mir station and the ISS. Before sending a man to Mars, scientists and physicians should provide new degrees of protection. Together with Bion, another Samara satellite, the Stork, is sent into orbit.

Looking inside, we can see the insides of the satellite. The main system is a command navigation control system. It distributes power to all systems, collects telemetry and sends it to Earth.

"Aist" was created by the hands of students of the Samara Aerospace University. A satellite has a number of tasks, among which are ambitious ones. For example, the ability to predict with the help of "Stork" natural disasters. All data from orbit will be transmitted to the university laboratory.

Samara Soyuz carrier rocket has already become part of the global stories cosmonautics. Next in turn is the Bion spacecraft and the Aist microsatellite. It is symbolic that Samara development will go into orbit just on the "Union". Meanwhile, scientists are eagerly awaiting the first results. All attention is riveted, of course, on Bion - today it is the only space complex in the world on which biological experiments can be carried out. And in Samara, they also wait, as the "Stork" will show itself. The microsatellite weighing only a kilogram of 50, according to the authors, can provide the Samara region with a global priority in the field of radar sensing of the Earth.

As for Bion, his stay in orbit will be limited to one month - on Earth, in the Orenburg region, it will be met by 18 May. But the nerves are already at the limit for everyone - and not only for people. On the eve of departure, there was a conflict in one of the flight teams of mice: two males staged a fight, during which one of the "astronauts" was killed. I had to urgently change the whole squad. At Baikonur, it was noted that it would be very good if this incident were the only misunderstanding before a responsible start.

Ctrl Enter
Noticed a mistake Highlight text and press. Ctrl + Enter
We are
ARMY-2016. Cluster VCS. Part of 2. Space is space!
33 comments
Information
Dear reader, to leave comments on the publication, you must to register.