April 20 2013
12
20 — 23 March The American president traveled around the Middle East, trying to reconcile his quarreling allies - Turkey and Israel. This, according to US Secretary of State John Kerry, would allow "serious progress in the question of achieving peace and stability in the region." It turns out that the White House sincerely wants the explosions in the East to stop rattling and blood to flow? At first glance, this is exactly the case. But let's look at what is happening more closely. 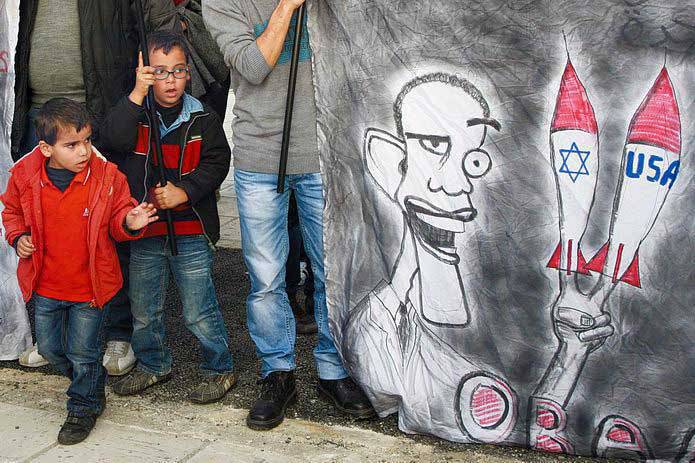 On the eve of the visit of the President of the United States to Israel, a warm company, “Media & Allies,” conducted informational artillery preparation: the first ones reported on “yet another fact of using Damascus weapons, The second unanimously resented this issue. The head of the White House himself said that if this message was not a duck, then the Syrian leadership had broken the “red line”.

19 March US senators John McCain and Lindsay Graham issued a joint statement urging the president to react immediately if facts are confirmed. Two days later, the media reported on the "controversy" of the latest crimes of the Syrian authorities. In particular, 21 in March Reuters published an article entitled “Facts do not confirm the use of chemical weapons in Syria: officials”.

The reason for "doubt", experts say, is obvious - the time has not come yet. Exactly 10 years ago, the United States also had no evidence of Saddam Hussein’s readiness to use weapons of mass destruction (WMD), but this country did not save from invasion and subsequent defeat. Obviously, the next western duck was launched with a different purpose.

This method, widely used in the information war, is not new and well tested. To begin with, the world community must be accustomed to a bunch of words: “Syria, chemical weapons, Assad, civilian deaths” ... After a few months (or even better years) of such “training,” millions of information consumers will believe any government is criminals and the bombing will be perceived as fair retribution. "

Many analysts are convinced that the US war against Syria is no longer just informational: the White House has crossed the Red Line for a long time. So, in January, Barack Obama announced that humanitarian aid was once again allocated to the Syrian people - $ 155 million. Who exactly was the money addressed, could be understood from the president’s words about the Syrian opposition’s “lifting the head” and the unavoidable end of President Al-Assad’s regime ( White House 29.01.2013 g.). With this tranche, the total amount of support reached $ 365 million at that time.

February 28 Secretary of State Kerry announced the planned provision of American Syrian Army (FSA) militants with American dry rations and medical supplies. Sixty million official promised to allocate for the needs of the political wing of the SSA.

In March, there were reports of the presence of American, British and French military instructors in Jordan. In particular, it was about the fact that over the past three months more than 200 SSA fighters have been trained in two training camps. In total, according to plans, about 1200 "specialists" should have left the training centers. Even earlier, it was reported that 150 of American special forces were in Jordan.
Today, American passport holders join the ranks of Syrian militants, and for this they are not considered to be terrorists or deprived of citizenship, but quite the opposite - they are interviewed and presented as freedom fighters. Such a “star” was recently Eric Harrone, a former soldier of the US Army, and now the Syrian “rebel” nicknamed American, who converted to Islam. He is fighting along with militants of the Jabhat al-Nusra group, officially ranked as al-Qaeda allies in the United States.

“I hate people like Bashar. I hate Iran. I am a free soldier, ”Harron quotes Fox News. When asked how he fights on the side of al-Qaeda, the American answered ambiguously: the United States, too, is not playing with only one gate. “Keep fighting, Eric! The people of Syria and you are in my prayers, ”wrote militant sister Sarah Harrone on her Facebook page.

A little earlier, another US citizen, an 25-year-old Syrian-born Obayda Hitto, joined the SSA. He gave the New York Times interviews shortly before Harrow’s revelations. With reference to experts, the publication suggested that about a hundred citizens of the United States, Britain, France and Canada were fighting on the side of the FSA.
By the way, in the American war for the Syrian freedom, the Hitto family made a career - 18 March 2013. Obaidy’s father, a major businessman from Texas Hasan Hitto, was elected Prime Minister of the opposition government - the Syrian National Coalition. 50-year-old American, who left Syria in distant 1980, became the official "eyes and ears" of the White House in the new government of Syria.

Another character is widely known overseas - Matthew VanDyuk. Having fought a lot in Libya and Syria, this “freedom fighter” does not just travel freely in America - he speaks at rallies and even lectures to students. Matthew places the list of his victories over totalitarian regimes, as well as the schedule of planned performances, on his personal website www.matthewvandyke.com. And nobody, notice, accuses VanDyuk of extremism and complicity with terrorists.

Where to look for al Qaeda headquarters?

Those to whom the United States openly provide moral and material support, destroy Christian temples in Syria and desecrate shrines, burn American flags and sing Bin Laden's "feats".
According to numerous testimonies, mercenaries-Islamists are fighting along with the SSA fighters (mostly deserters from the Syrian armed forces). “We have clear instructions from the leadership (al-Qaeda) to help the SSA with whatever we can. We support them with explosives and ready-made bombs, ”said Islamist field commander Abu Huder, a journalist for the British newspaper The Guardian.

Do not hesitate to demonstrate a connection with the terrorists and the opposition Syrian government. For example, in December 2012, the head of the Syrian National Coalition of Revolutionary and Opposition Forces, Sheikh Moaz al Khatib, publicly appealed to the US President to strike out Jabhat al-Nusra from the “roster” of terrorist organizations. The White House was silent, but Undersecretary of State William Barnes suggested that the sheikh discuss the problem during his upcoming visit to Washington.

Supporting such forces, experts say, the White House seeks to repeat the “Libyan” scenario in Syria. “We warned President Obama that the use of al Qaeda and other terrorist organizations to overthrow the totalitarian regimes in the Middle East will not end well,” wrote one American journalist in the online magazine The American Dream. “But our leaders convinced us that the“ freedom fighters ”opposing Gaddafi and Mubarak want democracy. As a result, one form of tyranny here was replaced by another, much worse than before. ”

The new government in Egypt and Libya, the author noted, was not so grateful to the United States as was supposed. The storming of the US embassy in Cairo and hoisting the al-Qaeda flag on its building, the armed attack in Benghazi on the American consulate and much more is evidence of this. “Unfortunately,” the journalist sums up, “our politicians, assessing events in the countries of the Middle East, are fundamentally mistaken in deepening the consequences of political miscalculations.”

Not so long ago, the British political comedian and journalist Paul Joseph Watson proposed to solve the problem of world terrorism outside the box, but “for sure” - to inflict an airstrike on those who “pay, arm and provide the necessary terrorists all over the world” - on the White House. “Since today it is clearly defined that everyone who is involved in terrorism, including US citizens, should be destroyed by an UAV air strike, Obama is obliged to immediately order the beginning of the shelling of the White House,” writes Mr. Watson. He believes that it is in this building that the al-Qaida headquarters is located.

“The fact that al-Qaida was created by Western intelligence agencies and has always been used in their interests, demonstrates the following: the threat from this organization is one of the greatest hoaxes in the world stories. Supporting terrorists in Afghanistan, Libya, and now in Syria, Barack Obama is the main leader of al-Qaida. Wherever his administration intended to dominate the world’s map, terrorists appear to do the dirty work. Their efforts are paid in dollars from the pockets of taxpayers. By ordering an air strike against the White House, Obama will destroy the main source of world terrorism — his own administration. Barack Obama himself is no more than the first person of a global crime syndicate, ”the author concludes.

Of course, Watson's appeals are just a cruel joke. But if there was a way to wean the White House from his beloved occupation — to patronize terrorists — it would be much easier to live in the Middle East.

Ctrl Enter
Noticed a mistake Highlight text and press. Ctrl + Enter
We are
The eternal loser. The Life and Amazing Adventures of John McCainInterview of President Bashar Al-Assad to the Sunday Times newspaper
12 comments
Information
Dear reader, to leave comments on the publication, you must to register.