April 19 2013
24
Vasil (Vasily) Vladimirovich Bykov (years of life 19 June 1924 - 22 June 2003) was a Soviet and Belarusian writer, public figure, representative of “lieutenant prose”. He took part in the Great Patriotic War, ended the war as a senior lieutenant. Most of Vasil Bykau’s works of art are represented by short stories, the action of which unfolds during the war and in which the reader is confronted with the moral choice of heroes that they have to do in the most dramatic moments of their lives.


Vasil Bykov was born 19 June 1924, in the small village of Bychki, Ushachsky district, Vitebsk region. The future writer was born in a rather poor peasant family. He later said he did not love his childhood. It was a hungry life, when you had to go to school, there was nothing to wear and nothing to eat. His only joy at that time was nature and books. In the summer, he, like many Belarusian boys, ran into the woods, to the lake, to go fishing. If it had free time, of course. At that time, always had to work, it was necessary, and forced. After graduating from 8 classes, Bykov entered the Vitebsk Art School at the sculptural department (the future writer, among other things, drew quite well). But he failed to finish his studies, he had to leave school and return to his native village after the scholarships were canceled. In June, 1941, Vasil Bykov, an external student, passed exams for the 10 class. 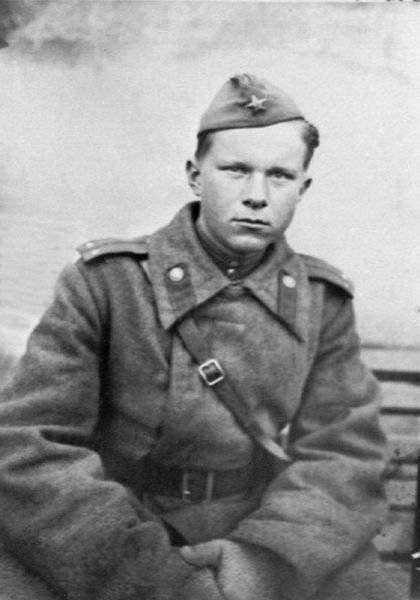 The war found a writer in Ukraine, where he participated in the creation of defensive lines. During the retreat to the east, in Belgorod, he lagged behind his column and was arrested. He was even nearly shot, mistaking for a German spy. In the winter of 1941-1942, he lived at the Saltykovka station, as well as in the city of Atkarsk, the Saratov region, and studied at a railway school. In the summer of 1942, he was drafted into the army, graduated from the Saratov Infantry School. In the autumn of 1943, Vasily Bykov was promoted to junior lieutenant. He took part in the battles for Alexandria, Krivoy Rog, Znamenka. During the Kirovograd offensive, he was wounded in the stomach and in the leg (was mistakenly recorded as lost).

Memories of this and the events after his injury formed the basis of his future novel The Dead Doesn't Hurt. At the beginning of 1944, he spent the month at the hospital in 3, after which he took part in the Yassy-Kishinev offensive operation and participated in the liberation of Romania. With the army he passed through the territory of Bulgaria, Hungary, Yugoslavia and Austria. He served as a senior lieutenant, commanded an artillery platoon. During the war he was wounded twice, has military awards. During the war years he was awarded the Order of the Red Star, after the war he received the Order of the Patriotic War 1 degrees.

After demobilization he settled in the city of Grodno (from 1947 year). Here, the future writer worked first in the workshops, and then in the editorial office of the regional newspaper “Grodno truth”. In Grodno, he worked until 1949, after which he continued to serve in the Soviet army, served in one of the remote garrisons in the Kuril Islands. Finally, Vasil Bykov was demobilized from the armed forces only in 1955, already in the rank of major. 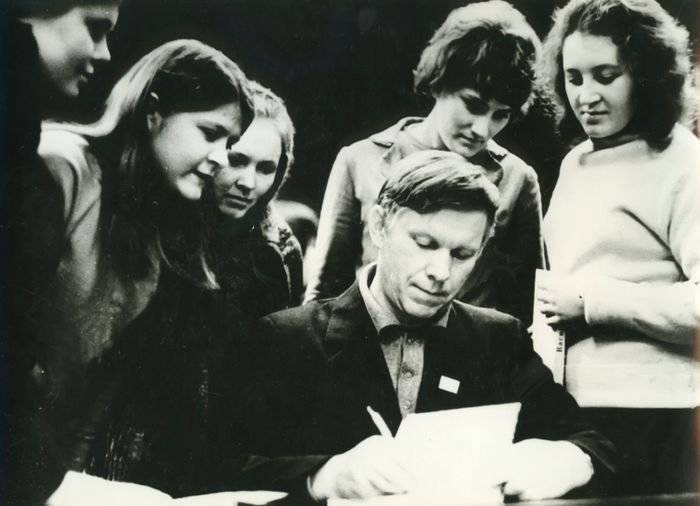 His first works of the future writer published in 1947 year. However, the writer himself counted off his creative activity from 1951, this year in the garrison in the Kuril Islands, he wrote the stories Oboznik and Death of a Man. For many years, the main heroes of his works were soldiers and officers, and the main theme of the Great Patriotic War - the era of the "colossal efforts of the Soviet people." Later, critics attributed his works to the so-called “lieutenant prose”, the most prominent representatives of which were Yuri Bondarev, Konstantin Vorobyev and many other writers who fought.

In 1966, the squall of official criticism was caused by the story “Dead Doesn't Hurt” published in the magazine “New World”, in which the “meat grinder” of the past war was shown with the merciless realism inherent in all the work of Vasil Bykov. Despite this, this work brought the writer world-wide fame. And Bykov himself highly appreciated his “Novomirivsky period” of life and friendship with the famous editor of the magazine, the poet Alexander Tvardovsky. In 1970-s, when the flow of front prose in the country waned, Bykov did not even think about parting with the title of "trench chronicler." He did not change the theme of most of his works and was not going to forget about the tragedy of the war years. Vasil Bykov's stories have become classics of Russian literature: Centurion (1970), Live to Dawn (1973), Wolf Pack (1975), His Battalion (1976), Go and Never Return (1978).

The favorite genre for the writer was the story. In the center of each of his works, he tried to put a moral problem, which Bykov "dissolved" in intense military episodes, as a rule, not very long in time. Often Vasil Bykov said and wrote that he was interested in those life situations that allow him to fully reveal the characters of the heroes, allow him to imagine the human essence as the most visible, to show it at the moment of the most vivid manifestation. Moreover, usually the spiritual ups of the heroes of his works ended in death. So, for example, the hero of his story "The Alpine Ballad" (1964) - a Russian prisoner of war, Ivan, died rescuing Italian Julia, with whom fate brought him together for only a few days, in order to experience the transient happiness of love after the hell of the concentration camp. The story "The Alpine Ballad" was one of the first Soviet literary works in which the captive was shown not as a soldier’s fault, but as his tragedy. 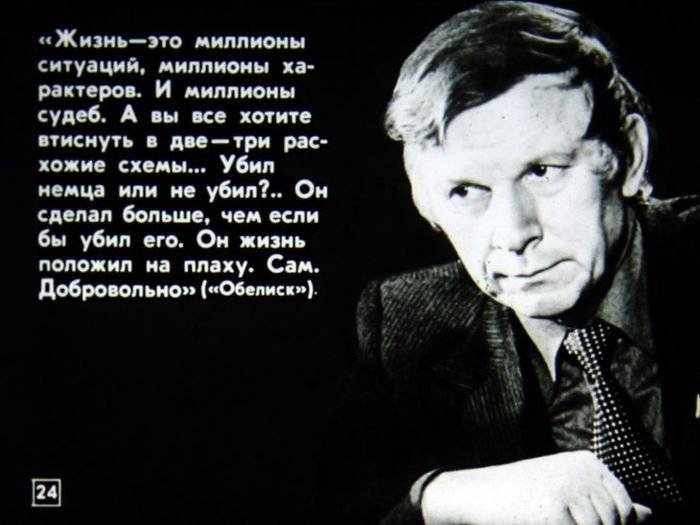 Also, the action of many heroes of Vasil Bykov’s works was connected with the life of Soviet citizens during the fascist occupation - in Belarusian villages and in partisan detachments. In this case, the theme of betrayal becomes the central theme of such works. So the main character of the story "Centurion" is able to maintain loyalty to duty and humanity, but in his companion Rybak the fear of death prevails, and he becomes a traitor. As a result, Sotnikov is executed by the fascists, and Rybak has managed to save his life at the cost of someone else’s deaths, which dooms him to eternal moral torment. The hero of another of his military story "Obelisk" also went to death. The school teacher sacrificed himself to save his students. In the story "Obelisk" the story is on behalf of one of the surviving adolescents, so the reader is given the opportunity to independently understand and draw conclusions about the motives of the actions of the deceased teacher.

Vasily Bykov was awarded the USSR State Prize for his stories “Obelisk” and “Live to Dawn”. While living and working in Brest, the national writer of Belarus was published in the journal Novy Mir, and in 1970-1980-ies he was a member of the leadership of the Union of Writers of the USSR. Today, many critics rightly consider his work an integral part of Russian literature. His story “To go and not to return” (1978), which took place on the territory of occupied Belarus in 1942, was dramatized by the author and successfully staged in theaters in Russia and Belarus. In 1980, Vasil Bykov received the title of National Writer of Belarus. In the 1986 year, his merit in the literary field was awarded the Lenin Prize.

Since the beginning of perestroika, Vasil Bykov became one of the first writers in the country who showed the tragedy of the Russian countryside in the 30-ies of the 20th century, when the Stalinist methods brought the peasants to a state of serfdom and poverty. He described the difficult fate of the Russian peasantry in the “Sign of Trouble” story, for which Bykov was awarded the Lenin Prize. The story described the fate of the Belarusian farmers Stepanida and Petroka, who, despite all the humiliation, refused to serve the fascists. This story embodies the most important idea for Vasil Bykov’s creativity: human dignity is more precious than human life. Also in this story appears a new idea for his work - that the sufferings of the Soviet people during the years of the Great Patriotic War are not accidental, they are most likely to be natural. 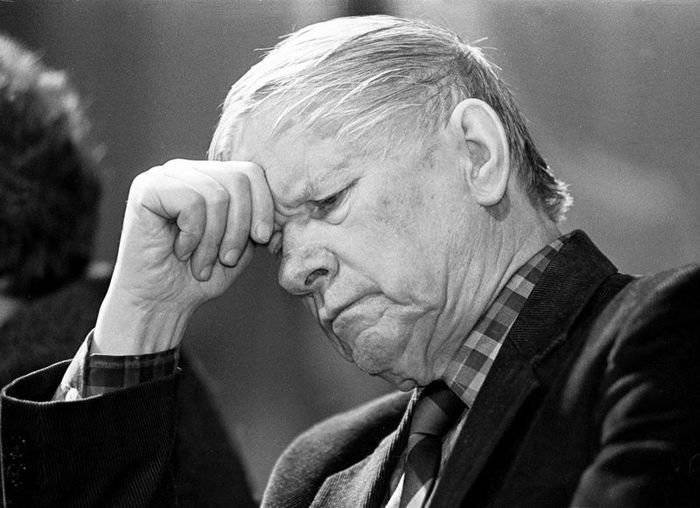 When Alexander Lukashenko came to power in Belarus, Vasil Bykov, who spoke out with harsh criticism of the regime established in the state, is being persecuted by the authorities, who are starting a campaign against him: they are beginning to be defamed in the media, but the works are not printed. At the end of 1997, he was forced to leave the country and go to Europe. For some time he lived in Finland, Germany, the Czech Republic. In “Emigration” he wrote a number of parables and short stories, as well as the story “Wolf Pit”, which was devoted to the moral consequences of the Chernobyl disaster.

The writer 22 died on June 2003 of the year on the day the Great Patriotic War began in the oncology hospital near Minsk. He returned home a month before his death. He was buried at the Eastern Cemetery in Minsk, the streets in Belostok, Grodno, and the village of Zhdanovichi were named after the writer. Bykov wrote most of his stories and short stories in Belarusian, many of which he himself translated into Russian. During the life and after the death of the writer, his works were translated into many languages ​​of the world.