When and who will replace the MiG-31 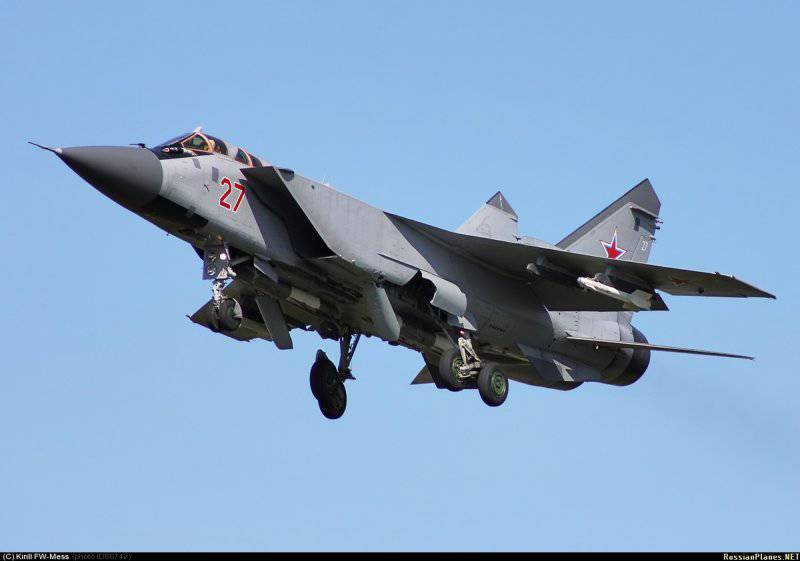 On the eve of the holiday, the air defense forces in the State Duma flared up a violent controversy dedicated to one of the most famous models of air defense weapons - the MiG-31 interceptor fighter. The Defense Committee, for the first time, was perhaps the first to attempt to tackle the fate of an armaments program. The first parliamentary hearings, aimed at influencing the problems of rearmament, were called "The resumption of production of the MiG-31: reality and prospects."


As follows from the title of the hearing, the defense committee proposed to resume production of the MiG-31 interceptor fighter, which was discontinued back in 1994. However, invited to hear the commander of the Air Force Viktor Bondarev and a member of the Military Industrial Commission under the government Mikhail Kashtan - did not support the idea of ​​parliamentarians. But, despite the failure of the initiative of deputies, the result of this event is still there. And the first experience of such hearings can be considered positive. He is positive, at least from the point of view that military construction questions that concern both society and parliamentarians receive qualified answers.

It is worth noting that in recent years we have witnessed an unprecedented wave of speculations on military subjects. And even more - a very successful information campaign, which aims to discredit and undermine the efforts that are being made to restore the power of the Russian Armed Forces. The goal of this campaign is to convince society of the futility of efforts to restore defense capabilities. The goal is to create public opinion that will be negatively adjusted to any changes in the military sphere and will put pressure on decision-making centers. Thus, a situation was created when the society itself opposed attempts to strengthen the defense potential of the country. Notice - a society that is set up to strengthen its defense potential and is patriotic in its views - was used for purposes that are directly opposite to their interests.

The fact that "everything is ruined and plundered," and the rearmament of the armed forces is only "drank and kickbacks," I think, almost everyone has heard or read. This information was always given from the most patriotic positions and caused the most sincere indignation. Few of the readers thought about how reliable the information was and how much its share corresponds to the actual state of affairs. After all, the basis of the information campaign has always been based on real facts, on the basis of which general conclusions were made and to which simple and accessible explanations were offered.

As an example, I recall the conversation with one acquaintance - a professional “advertiser”, so to speak, a representative of the “creative class” who is very far from understanding the problems of military construction and even interest in them. But he began to be interested after half a day at a friendly meeting we were talking about the transformation of the army. Two days later, having thoroughly climbed the Internet, he called and said something like: “... I don’t know how much everything they write is true, but from the point of view of the“ advertiser ”- all история about “inflatable army” is a very professional PR campaign. I just see it from my experience. ” It was about a large series of articles and stories on inflatable disguises that imitate military equipment. Such means make it possible to effectively mislead aerial reconnaissance vehicles, and air assault means to “shoot off” for nothing. The purchase of these funds was covered in a huge amount, but not at all in terms of their effectiveness or benefits. And with a strange message that, they say, “instead of a real technology, they buy an inflatable,” “all this is cheating,” “our army will become inflatable,” “an army on the threshold of new cheating,” etc. In the opinion of a person who understands the purpose and necessity means of masking - all this chatter is not worth it to somehow respond. In the professional eye of the "advertiser" - this is a planned media attack. But in the opinion of most readers, the absence of a clear explanation is evidence of the loyalty of the accusatory statements.

The success of this information war helped the fact that the military sphere in our country is traditionally considered to be a topic that is not open to public discussion and does not require justification before society of certain decisions. It turned out that the information war was conducted “at one gate” - to respond to informational blows, which were often frankly close and incompetent - they simply did not consider it necessary. And they remained in the public consciousness not contested, and therefore - true.

In a way, the deputies' consideration of the issue of resuming the production of the MiG-31 should also not be considered in isolation from the general information background. The issue of increasing the effectiveness of air defense is really difficult and really requires special attention. But do not blame deputies for the desire to resolve this issue in a somewhat panicky way. They are not isolated from the information war, but are in its very center, often being its objects. It is necessary to increase the capabilities of the Air Force and Air Defense. But it is unlikely by pouring funds and resources into the resuscitation of an excellent, but not the newest model aviation equipment, the production of which was lost almost twenty years ago.

And here I want to mention one very important point. Despite some emotionality of the deputies and a critical attitude towards the invitees - they heard and understood the arguments of the Air Force and industry.

The commander-in-chief of the Air Force explained the situation to the deputies calmly and with numbers in their hands. Estimation of costs for the resumption of production of the MiG-31 says that it was carried out, and the possibility of resuscitation of production came to mind not only to parliamentarians: cooperation will cost another 15 billion. This is at least 10 billion rubles. In the next armament program for 25 – 50 years, you can pledge the money and create a new aircraft. ” And then the commander-in-chief shared sensational information - it turns out that a new aircraft of a similar purpose is already being created by order of the Air Force! It will be created before the 2016 of the year and before the 2025 of the year it can begin to replace in the MiG-2020 formation.

As for today's day, no one is going to abandon the MiG-31. According to the commander in chief: “The Air Force is not against this aircraft one iota, this aircraft is needed by the Air Force, pilots love it. ... we will modernize the MiG in the version in which the Air Force needs it. " Now combat planes are being upgraded to a modified MiG-31BM. For the further modernization of the aircraft’s on-board equipment, development work is required. But, as Mikhail Kashtan stated, it is necessary to further improve this machine, including as a “supersonic distant fighter-interceptor capable of intercepting targets both at low and at high altitudes”. He did not rule out the transfer to subordination of the aerospace defense forces of some parts of fighter aviation, agreeing on this with the opinion of the deputies. But today, the main task he rightly called the restoration of airworthiness of all existing MiG-31 and their modernization (about 300 machines, of which more than half are derived from the line-up and require major repairs and restoration). Since it is impossible to modernize and extend the flight resource to infinity, and the need for a machine of a similar purpose is not disputed by anyone, it is worth agreeing that it is preferable to create a new car, extending the life of the old one. After all, to restore production of the MiG-31 after 20 years will also take considerable time and a lot of money.

Actually, the deputies agreed with this. Following the results of the hearings, the Ministry of Defense will try to determine how much the MiG-31 remains and how many of these vehicles the Air Force requires. The Ministry of Industry and Trade was instructed to stop the disposal of these aircraft. Well, the Military-Industrial Commission will have to think about ways to further modernize and restore the existing aircraft. Such a result of the hearings should be considered almost optimal. It is achieved through a dialogue between representatives of society, concerned about the problems of defense, and representatives of the armed forces and industry, who are better able to handle the current situation and are ready to explain it. Let the proposal of parliamentarians was not optimal, but they listened to it and stated their position. In this case, the last word will still remain for the Air Force, since it is they who should determine the composition and use of their equipment. But their vision of development and rearmament was intelligibly explained and grounded. And this will relieve speculation on this topic.

In conditions when the probable enemy relies heavily on the air component of his offensive power - it is simply necessary to strengthen the potential of air defense weapons and increase the fleet of fighter aircraft. Returning cars that, without having received a timely overhaul, are now simply turning into piles of scrap metal - this is a way to increase the size of the air force relatively quickly and relatively cheaply. In addition, the MiG-31 still has good prospects for modernization and improvement of combat performance. It should be understood that the aircraft itself is only a “platform” that lifts into the air and quickly delivers detection, communications and armament complexes to the right place. And the combat effectiveness of a fighter largely depends on the perfection of these systems, and not only on the flight characteristics of the carrier. Although the flight characteristics of the MiG-31 can be improved. For example, the commander-in-chief rightly noted that now the speed in 2,83М is unattainable for him (does not withstand the glass of the cockpit canopy) and the MiG-31 flies at the speed of 1,5М. But if its onboard equipment is improved and brought to a modern level, the vehicle will be able to remain an important part of fighter aircraft for a long time. This way of increasing combat effectiveness is used by almost all manufacturers of military aviation - the vehicles put into service as early as 70's receive new equipment and new weapons, and remain in service until now.

This, however, does not negate the need to create new machines. So far, the question of including the new fighter being created now in the armament program has been left behind the hearings (commander-in-chief of the Air Force believes that efforts should be concentrated on the new machine). However, its development is at a stage when it is still difficult to determine the cost and scope of design work. Hopefully, he will still enter the armament program when his face becomes more detailed. And enterprises and design bureaus will not bring it “on their own initiative”, as it happened quite recently.

Ctrl Enter
Noticed a mistake Highlight text and press. Ctrl + Enter
We are
List of destroyed the largest and most high-tech enterprisesHow to eliminate the gaps of the AUC system
75 comments
Information
Dear reader, to leave comments on the publication, you must to register.