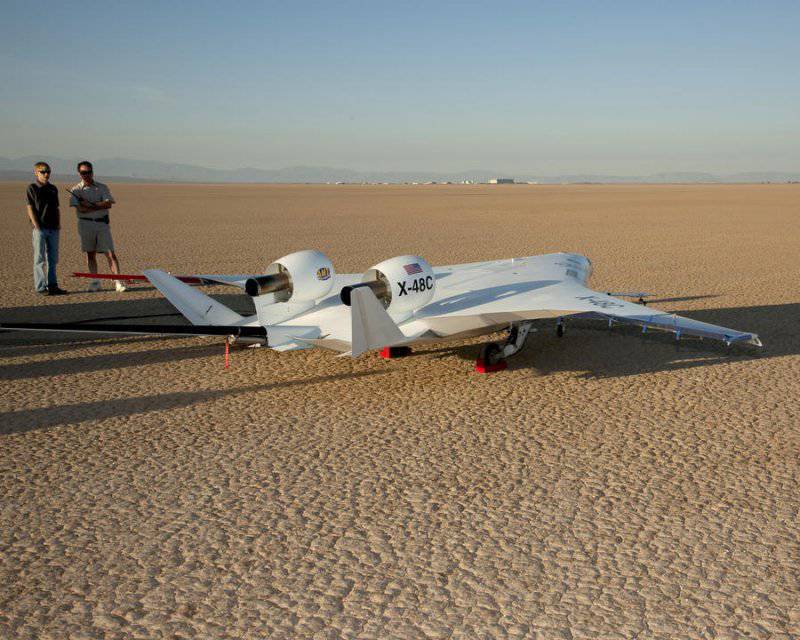 The Americans recently completed testing an experimental drone Boeing X-48C. It is expected that such devices will enter the service of the US Army during 15-20 years.


The tests were conducted jointly by Boeing and the NASA research center for eight months. During this time, Boeing X-48C completed 30 flights. The drone, on average, reaches speeds of up to 226 kilometers per hour and is gaining more than three kilometers in altitude.

The device was created on the concept of "mixed wing" (Blended Wing Body - BWB).

Aerodynamic BWB schemes are more effective than the usual options in terms of aerodynamics and mass distribution. Due to this, such UAVs are more economical. The X-48 series appeared in the 2003 year, the model C became the third in a row. The previous version of the Boeing X-48B was named the best invention of the 2007 of the year according to the magazine Times.

The new model received two turbojet engines of 89 pounds, instead of three engines of 50 pounds, as was the case with X-48B. In addition, on model C, the wings were moved closer to the engines and the tail section was extended two feet.

“We showed that the BWB scheme aircraft, which offers tremendous prospects for significant fuel efficiency and reduced noise, can be controlled as efficiently as conventional aircraft during takeoff, landing and other low-speed flight modes,” said BWB program manager Bob Liebeck.

The Boeing X-48C is a large-scale model of a heavy subsonic plane with a triangular tailless circuit that effectively merges the wing with the fuselage.

“With the completion of the flight tests of the X-48C, we achieved our goals in establishing take-off characteristics and proving the controllability of the concept in low-speed mode throughout all flight tests. A very quiet and effective concept has proven to be promising for meeting NASA's environmental goals in future aircraft designs, ”says the Director of the Environmentally Responsible Program. aviation"(Environmentally Responsible Aviation) Faye Choker.

Boeing representatives say the company will continue to develop BWB technology in the future.