April 18 2013
52
A34 "Comet" (English A34 Сomet) is an English medium cruising tank, which was produced from 1944 to 1945 and took part in the final battles of World War II. Is a further development of cruising tank Mk VIII Cromwell. The tank was equipped with a sufficiently powerful 17-pound anti-tank gun (76,2 mm) and proved to be a fairly effective machine in the fight against heavy and medium tanks of the Wehrmacht. In fact, the A34 Сomet was no longer a purely cruising tank, but an MBT. After the end of World War II, the tank was in service with the British Army until 1958 and managed to take part in the Korean War. A total of 1186 tanks of this type were assembled.


The combat experience gained by the British forces during the North African campaigns convinced the military of the need to have at their disposal a tank possessing a cannon with a high initial velocity of the projectile. Therefore, when the new Cromwell tanks began to arrive in combat units, the tank department initiated work on the creation of a new tank equipped with a long-barreled weapon. In order to save money and time, the base for the new tank was to become the “Cromwell”, which led its history from an earlier cruiser tank, the Cruiser. At the same time, it turned out that the 17-pound British gun was the only weapon that could be used to effectively fight the new German Tiger and Panther tanks in the turret of the new tank. Therefore, the developers began to search for suitable for the tank A34 Сomet guns.

As the first challenger, they considered the American gun M1 of caliber 76-mm, which was installed on the second-generation M4 “Sherman” tanks. The second possible option was the long-barreled gun HV 77mm, which was a shortened 17-punch with a redesigned breech that was designed to use a wider and shorter sleeve. The new weapon was almost as good as the usual 17 gf, but it was much more balanced and better suited for use in smaller towers. As a result, the HV 34mm gun, created by Vickers-Armstrong, was chosen as the main weapon for the A77 Сomet tank. 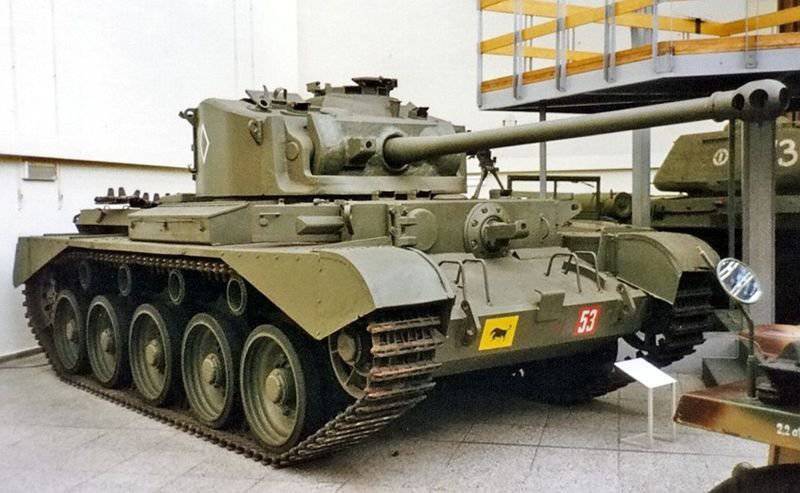 This gun used the same projectile as the 17-pounder (QF 17-pounder), but the sleeve to it was borrowed from three-inch anti-aircraft ammunition. For this reason, unitary artillery shots for the new gun were not compatible with the 17-gun and to prevent possible confusion while supplying parts with ammunition, the new gun was marked HV 77mm, although they had the same caliber 76,2-mm.

Similar to the “Cromwell” tank, the A34 Comet, in fact, on 60% was a completely new design with a new turret and a higher hull - these are the most obvious differences between tanks. The English company Leyland Motors was one of the first in the world to start welding when assembling its tanks, for this reason the А34 Сomet tank was all-welded from the very beginning. The turret of the tank had an electric turn, with the exception of the vertical pickup of the gun, which was made by hand. The system of rotation of the tower had a mechanical duplication, in case of failure of electrical equipment. In addition to the long-barreled 76,2-mm cannon, the 2 7,92-mm machine gun was installed in the turret of the tank, another machine gun could be mounted on the turret roof, it served as an anti-aircraft machine gun.

Mirror periscopes were installed on the tank as means of observation, and telescopic sights were used as sighting devices. The armor of the tank was considerably enhanced compared to its predecessors: the thickness of the frontal armor of the turret was increased to 102-mm, and the frontal armor of the hull to 76-mm. A grenade launcher was mounted on the tank turret, shooting smoke grenades and intended for the installation of smoke screens. In addition, smoke bombs were attached to the stern of the car. Although the British traditionally called the new tank a cruising one, even then an optimal combination of mobility, security and firepower was achieved, which made it possible to refer it to the first main battle tanks (MBT). 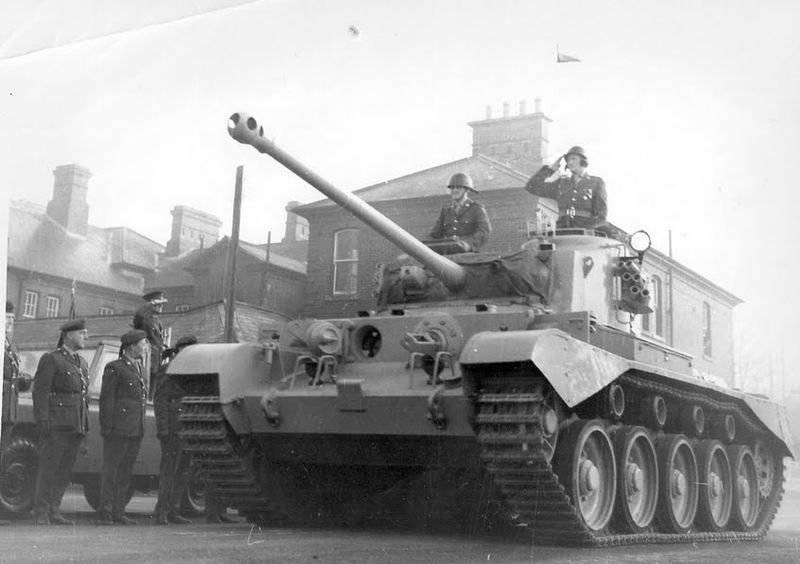 The crew of the A34 Сomet consisted of an 5 man: driver, commander, gunner, loader and gunner. The tank's ammunition consisted of an 61 projectile for an 76,2-mm cannon, as well as 5175 ammunition for 7,92-mm Besa machine guns. In addition, the tank had 20 smoke grenades for tower grenade launchers. If it was necessary to conduct combat outside the tank, the crew was equipped with the Bren.303 light machine gun, its ammunition was 600 ammunition, in addition, tankers could have personal weapon.

Just like on “Cromwell”, a “V-shaped” 12-cylinder liquid-cooled Meteor carburetor engine from Rolls-Royce with 600 hp power was installed on the “Comet”. It reached maximum power at 2550 rpm, engine displacement - 27 l. This gasoline engine accelerated a tank with a mass of 33,5 tons to 51 km / h when driving on a highway and to 29 km / h when driving on rough terrain. The thrust ratio was almost 18 hp / ton.

The tank's transmission consisted of an onboard transmission, a Merritt-Bfowrt Z5 transmission (5-speed non-synchronized gearbox, shoe brakes and planetary turning mechanisms), as well as a two-disc main friction dry friction. The chassis included 5 rubber-coated large-diameter road wheels on each side, 4 rubber-supported wheels on each side, the drive wheels had a rear location. The suspension of the tank was made individually; cylindrical spring springs were used (1, 2, 4 and 5 axle support rollers of the tank had double-acting hydraulic shock absorbers). Each tank caterpillar consisted of 114 tracks with track pitch - 112 mm and width - 394 mm. 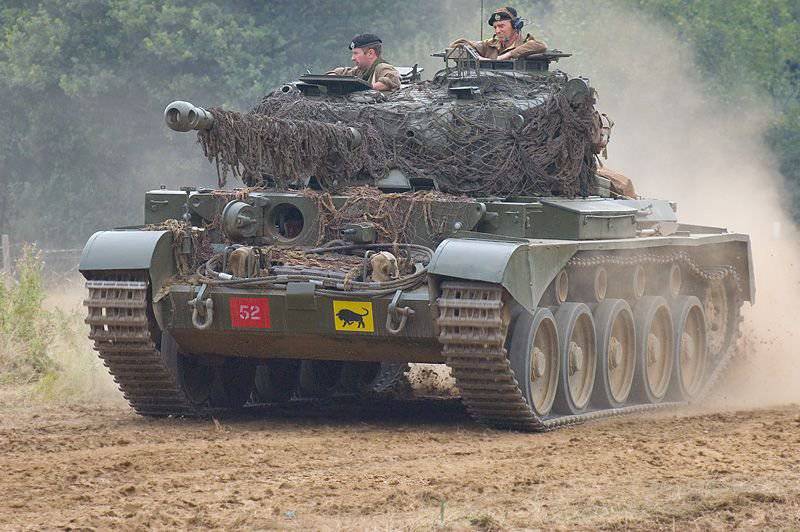 Among the tanks that appeared during the Second World War, the Comet was one of the best cars in its class. With a mass of 33,5 tons, this tank was almost in the same weight category as the later Shermans (32 tons) and the Soviet T-34-85 (31,5 tons). The closest German equivalent in the face of "Panther" was significantly larger and weighed already 45 tons. At the same time, the firepower of these two tanks was quite comparable with the 76,2-mm cannon “Kometa” was not inferior to the 75-mm abalone KwK42 L / 70 “Panthers” and was significantly superior to the guns that were installed on the T-34-85 and “Sherman”.

When using conventional armor-piercing ammunition, the А34 Сomet gun pierced 110-mm armor at a rational angle of inclination at a distance of 1000 yards (914 meters), and when using APDS sub-caliber ammunition, it pierced 165-mm armor at the same distance. Being more than 10 tons lighter than the "Panther", the English tank was worse armored, but at the same time it beat the German in terms of its mobility, speed, and had much greater reliability. The T-34-85 and Sherman tanks excel the British tank in almost all indicators. The tank's gun had exceptional accuracy and rate of fire both when firing armor-piercing and high-explosive ammunition. From any point of view - it was a low-vulnerable and fairly fast tank, which was ideally suited for waging warfare and breakthroughs. His appearance in the British army eliminated a well-marked gap between the British and German tanks. Perhaps this machine had only one real drawback - the program of its construction had a low priority, which delayed the commissioning of the tank.

At the beginning of the 1949 of the year, the Komets in the English army were completely replaced by Centurion tanks, but in the tank units that were located in Hong Kong and West Berlin, they were used until the 1958 year. In addition, this tank was delivered to Finland, Burma, Ireland and South Africa. For example, in service with the army of Finland from 1960 to 1970, the 41 tank А34 Сomet consisted of a year. 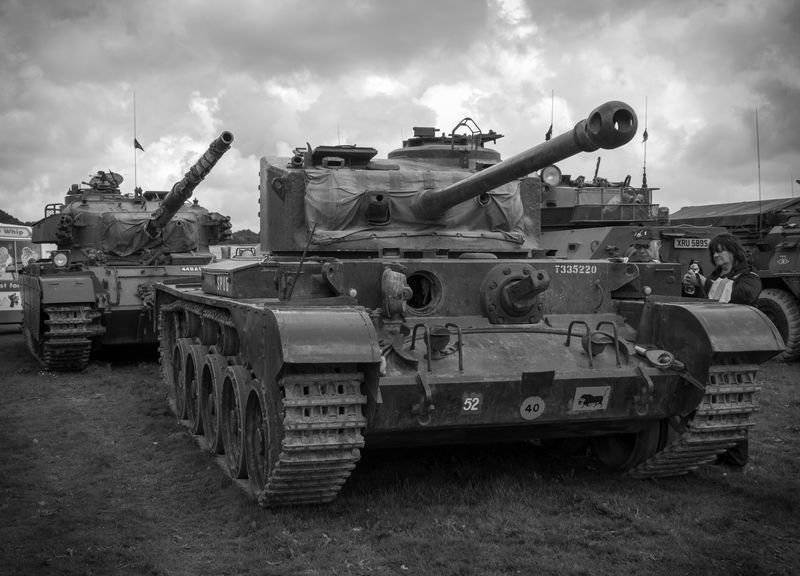 Ctrl Enter
Noticed oshЫbku Highlight text and press. Ctrl + Enter
We are
Modernization of MBT with the aim of increasing their combat effectiveness in urban environmentsArmored vehicles of Germany in the Second World War. Part of 2. The evolution of the organizational forms, the composition of the Wehrmacht Panzervawe and the SS troops
Military Reviewin Yandex News
Military Reviewin Google News
52 comments
Information
Dear reader, to leave comments on the publication, you must to register.