Tanks in the Chechen war

April 18 2013
83
In the 1990s, the Russian army became involved in an endless series of new Caucasian wars in which Tanks although they did not play a decisive, but still quite noticeable role, although most often they had to act in the most inappropriate conditions for tanks - in street battles.


We will not go into the political background of the conflict, but go straight to the description of military operations. The first significant event was the attempt to assault Grozny, undertaken on November 26 on 1994 by anti-Dudayev opposition forces. The decisive role in this operation was played by the tanks - 35 T-72А, transferred to the oppositionists from the warehouses of the North Caucasian Military District. If it were not for these tanks, then the assault could not take place at all, so we can say that they became the key factor, although not in the sense that the tank forces play in army-wide operations. This operation failed miserably because Dudayev and his entourage were well informed about all the plans of the opposition. The attacking groups were met with concentrated fire, and only 4 tanks managed to escape from the city, the rest were either destroyed or abandoned by crews. 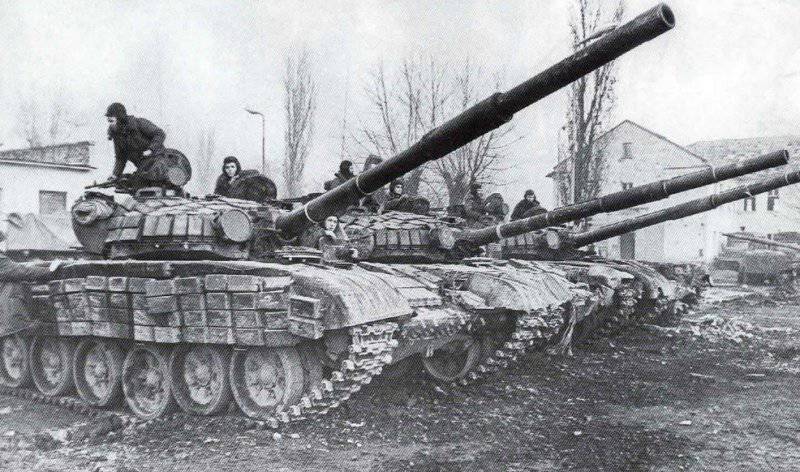 T-72B1 2 Tank Company 276 MSP before going out to support the assault groups leading the battle on Noah Bauchidze Street (in the foreground, Sergeant E. Lyapustin's 441 tank). For all the fights in Grozny, the tank has never been hit by an RPG. January 1995

The failure of this attempt to fight with “little blood in a strange land” pushed the Russian leadership to take more active steps, and on November 29, the Russian Security Council approved the plan of the military operation to restore constitutional order in Chechnya. In early December, several military groupings were created that were to enter the territory of Chechnya and in the event of the Dudaev’s refusal to lay down weapon take by storm Grozny. At Mozdok, a group of 15 battalions was formed, which had about 230 BTR and BMP, as well as 40 tanks. A group of 11 battalions with the 160 BTR and BMP and 30 tanks was advanced from the Vladikavkaz sector. The strongest group of 34 battalions, which had about 700 units of armored vehicles, including more than 100 tanks, advanced from the Kizlyar area. Already one enumeration of the forces involved shows that a hull scale operation was carried out.

However, from the very beginning everything did not go as planned, only to advance to Grozny’s troops needed 16 days instead of 3 as planned. As a result, Russian Defense Minister P. Grachev only 27 December ordered the beginning of the storming of Grozny December 31 with a mandatory report to the Russian President on taking the city on January 1 in 00.01. As we see, the rotten tradition of the Russian-Soviet-Russian army to take cities to the red dates of the calendar over the past two centuries has not been shaken at all. Then we take Pleven to the king's birthday, then Kiev - on November 7, Berlin - on May 1, and now a New Year present ... "The birthday cake made from stuffing human brother prepares the sovereign brother ..." These lines were written in 1877 year, but I'm afraid they are relevant today. 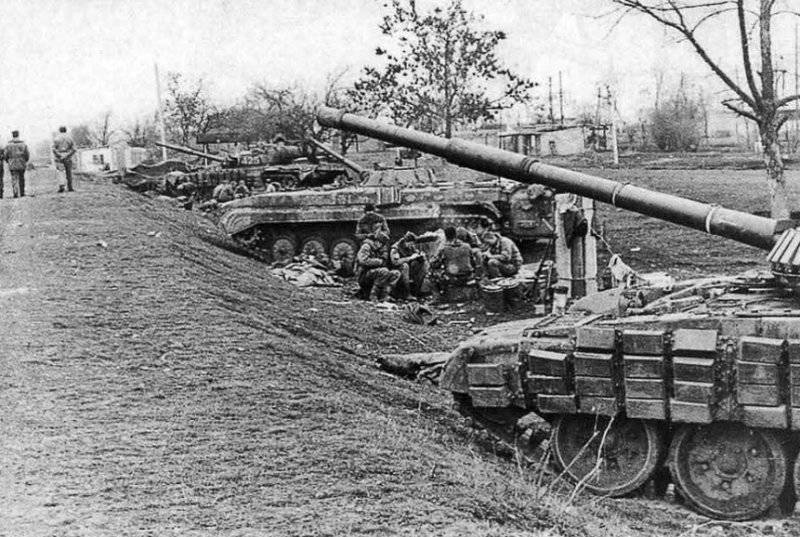 Combat positions 324 msp at the breeding farm at the time of blocking the road to Grozny. The command of the federal troops at the third stage of the storming of the Chechen capital provided for complete control over the city from the south. February 1995

Approximately 10 000 fighters who defended Grozny were concentrated around 15 000 federal troops. They were supported by 230 tanks and 879 light armored vehicles, several hundred guns. However, there were street battles, where this superiority in technology was largely leveled by the positional advantages of the defenders. At the same time, in the West, they continue to be in an unshakable confidence that the Russians were concentrating enormous forces to storm the Terrible. For example, a study by the Danish Royal Military College categorically states that more than 38 000 soldiers participated in the assault. Of course, from Copenhagen everything is seen much better.

Before the attack on the city after the heavy battle, the airport of Khankala was busy, but, unfortunately, the command did not draw proper conclusions on the results of this battle. It seems that for unknown reasons, the generals counted only on the symbolic resistance of Dudaevs. The storming of the city was carried out according to an underdeveloped plan, and once again the command did not have a reliable connection with its troops, which cost the assault dearly. In general, in the troops, the plan for the rapid roll of mechanized columns to the city center was regarded as an adventure. Subsequent events showed the validity of this assessment. 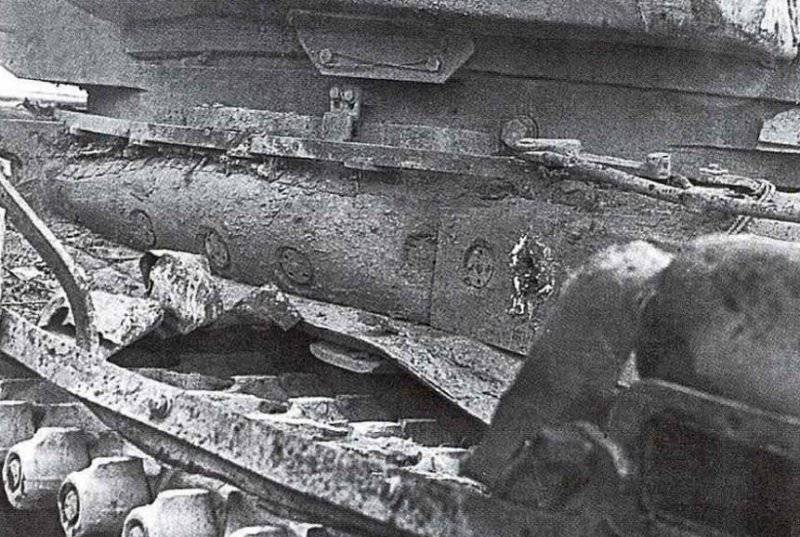 The spares of the SPTA saved the T-72B1 tank from hitting the cumulative jet into the engine compartment. Terrible. January 1995

The storming troops were divided into 4 groups in directions. In 06.00, the North group launched an offensive. It was part of the 131-I Maikop Motorized Rifle Brigade. Having lost several tanks and armored personnel carriers, the column nevertheless broke through to the railway station, where the brigade occupied the all-round defense. The “Northeast” group, having applied a successful diversion, rushed relatively freely into the city, where it also took up defensive positions. The Vostok and Zapad groups did not fulfill the tasks assigned to them. At the same time, if the North-East group set up checkpoints along the way, which ensured, however difficult, but still a connection with the rear, the North and West groups were surrounded.

The worst thing in all of this was that it was the Soviet troops who at one time got a lot of experience in fighting in the city. Königsberg, Breslau, Berlin showed how to act in such cases. But this experience was completely forgotten. And another gross error was made - it was not at all necessary that the Russian troops gave the initiative to the enemy. Instead of systematically sweeping the city using superiority in firepower, assault groups turned defensively. At one time, a well-known British admiral, who himself had fairly fought, said: “Moderation in war is the greatest idiocy. Ruthlessness, tirelessness, persistence - that is the key to success. " All these principles have been violated. 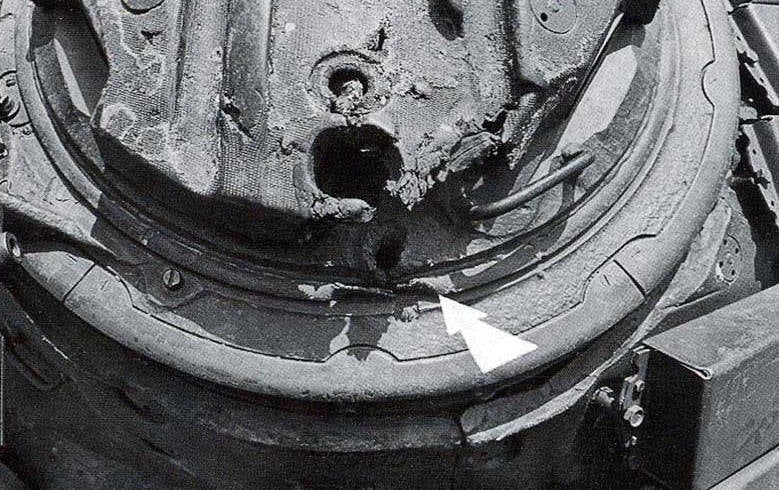 A hit from the top floor of the RPG grenade into the commander’s turret T-72B1 pierced the armor and hit the tank commander. Terrible. January 1995

As a result, Dudayev had the opportunity to pull down his most combat-ready units to the center of the city and proceed to the elimination of the surrounded groups. In a particularly difficult situation, the 131 Brigade found itself, which by January 1 had lost all its armored vehicles to about 16.00. At the same time, it should be said that the new-generation tanks (T-72 and T-80) showed noticeably better survivability than the tanks that fought in the Middle East in 1973 year. A single hit of an RPG projectile or ATGM was not enough to disable it. As a rule, at least 6 — 7 hits were required, and a record case was recorded when the tank withstood almost 20 projectiles. Dynamic protection systems worked extremely well. But the BTR and the BMP turned out to be completely defenseless. The important role played by self-propelled artillery in such battles was again confirmed, since the weight of the 152SZM “Acacia” SAU 2SMM projectile was noticeably greater than that of tank guns, and had a markedly greater destructive effect when shooting at buildings.

After regrouping and approaching reinforcements, the assault continued. Already about any anniversary dates we were not talking. In general, the organized resistance of the militants in Grozny was finally broken only by March 26. This assault cost the Russian army about 6000 people killed and wounded. Irreversible loss of armored vehicles, according to the Main Automobile and Armored Directorate Directorate of the Ministry of Defense of the Russian Federation, comprised 49 tanks, 132 BMP, 98 BTR. The number of damaged but repaired tanks remains unknown. 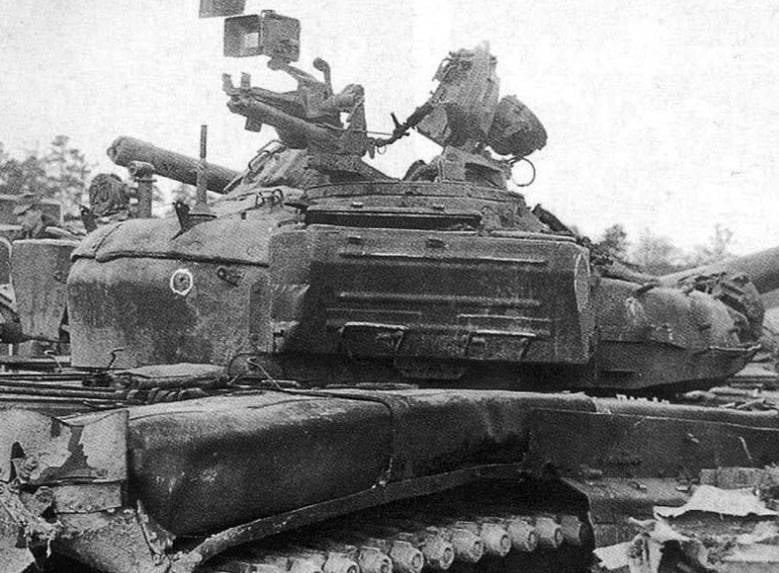 The lack of protection of the stern of the tower in the form of a spares box led to the penetration of armor and the death of the tank commander in the battle for Grozny. January 1995[/ Center]

One should not think that the fighting in Grozny went on continuously for the 3 of the month; they fall into several stages, separated by interruptions of official truces and temporary respites. The first phase ended on January 18 after the taking of the presidential palace, when the northern and central parts of the city came under the control of the Russian army. Only after this did the offensive begin on the southern part of Grozny, which was conducted with the strongest artillery support. There were days when our artillery fired missiles at enemy positions up to 30 LLC. So it was necessary to act from the very beginning.

In August, the battles broke out again in Grozny’s 1996, although this time they were relatively short. 6 August militants broke into the city. They did not attempt to storm the strongholds of the federal troops, but simply isolated them and subjected them to mortar fire, waiting for the defenders to surrender. However, by energetic actions of the command of the federal troops, it was possible to prevent the worst case scenario. Although the battles were still stubborn, 11 August was broken through the corridor to the Government House, which lifted the siege from this important point. And by 13 August a decisive break was reached. Federal troops began to push the enemy in all directions, and the militants began to withdraw from the city. By the time of the signing of the August 14 truce, the city was under the control of the federal troops. Losses at the same time amounted to all 5 tanks, 22 BMP, 18 BTR. We will not even comment on the chatter of some Western newspapers about the hundreds of tanks burned. 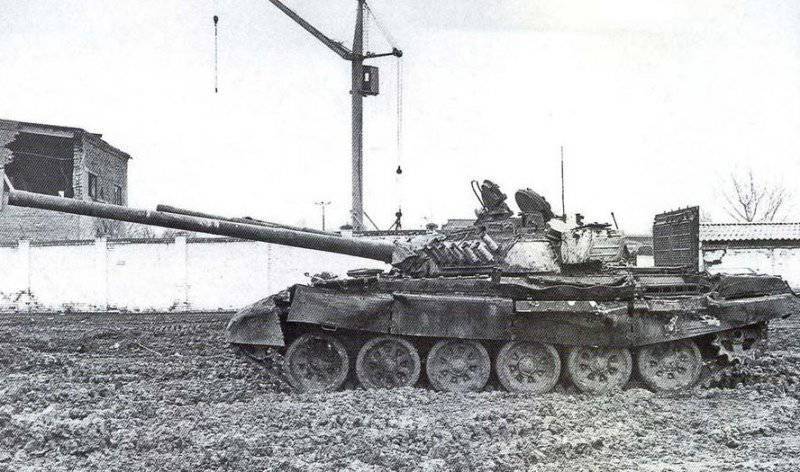 Trophy tank T-72A, captured by federal troops from illegal armed groups during the fighting in Grozny. For the characteristic towers, painted white lime, these cars from the feds got the nickname "white crows". After the repair, the tank was used by the North group in battles on the Minute Square. January 1995

During the Second Chechen War, Grozny had to be attacked once again, but now armored vehicles were used in the minimum necessary quantities. The assault began on 11 on December 1999 of the year. This time the main emphasis was placed on the artillery and air support of the assault infantry groups. As a result, the anti-tank defense system, thoroughly prepared by the militants, turned out to be simply useless. The advance of the federal troops was slow, but they suffered only small losses. A significant role in this operation was played by installations of volley fire TOC-1. Realizing that they could not oppose anything to such a gradual advancement, on January 31, the militants tried to break out of Grozny under the cover of a snowstorm. They suffered heavy losses, but some of their forces still managed to escape. 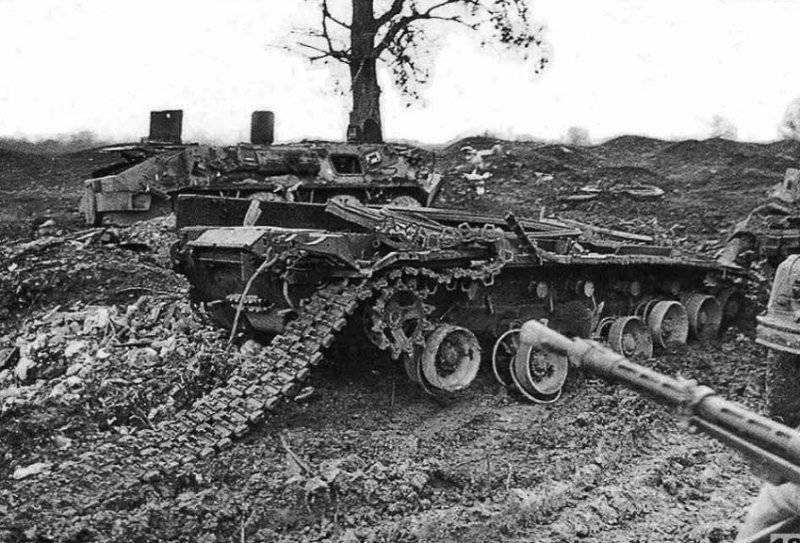 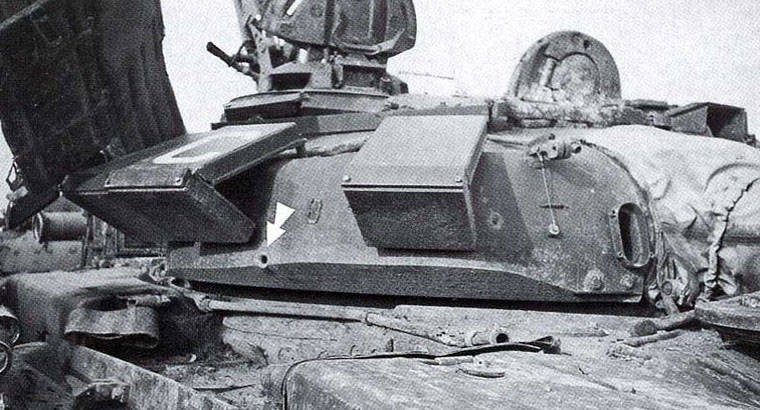 T-72B (M) 74 Guards. OMSBR hit by an RPG shot in the unprotected gap between the CDS of the turret chase and the nadgusenichny fuel tank (apparently, they tried to hit the tank with the second grenade in the turret unprotected by the fuel tank). The crew of the tank was killed. January 1995 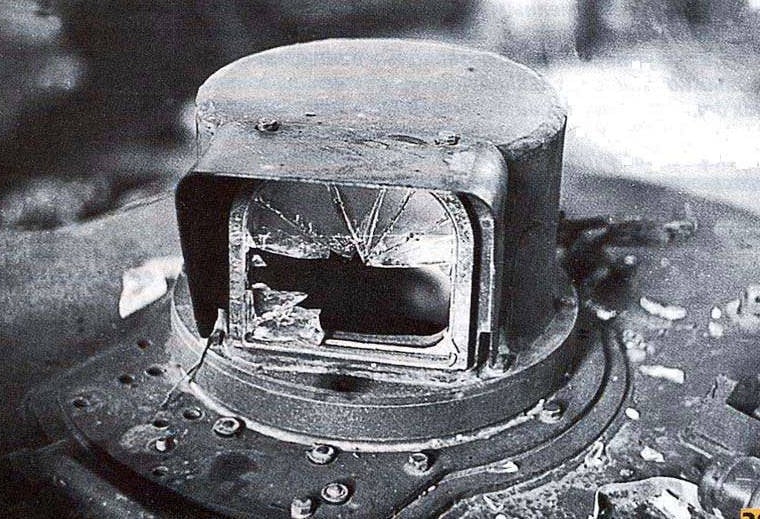 Ctrl Enter
Noticed a mistake Highlight text and press. Ctrl + Enter
We are
Myths of the Great Patriotic. Papier mache helmetAssault of the Terrible-2. We will sweep you away with fire
83 comments
Information
Dear reader, to leave comments on the publication, you must to register.