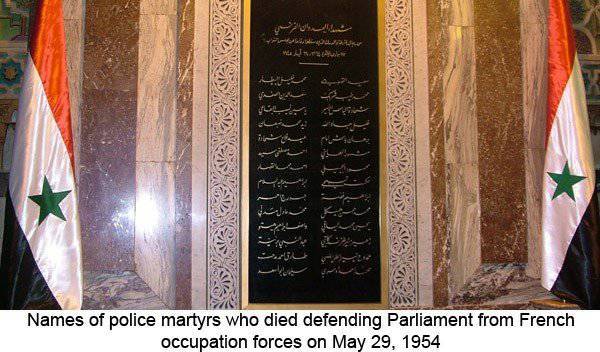 17 April Syria, under the tears of shells and the roar of alarming winds, marks one of the greatest holidays - Independence Day.
67 years ago, France, under the pressure of the Syrian liberation movement, was forced to abandon its colony, and Syria, finally, gained independence. The road to freedom was long and thorny, and quite a few heroic sons and daughters of Syria fell on this path. But this Arab state by its example proved the famous phrase of Goethe: "Only he is worthy of life and freedom, who every day goes for them to fight."

At the beginning of the twentieth century, after the First World War, having just freed itself from Ottoman rule as a result of the Arab uprising, the young country, together with its people, sought to build a new life. In 1920, the Syrian Arab kingdom, led by King Faisal, was proclaimed. June 13 Syrians convened a National Constituent Conference. It presented the draft Constitution of the newly born and resurrected from the ashes of the ancient state.

But such plans were not to the liking of the French, who wanted to get their hands on both ancient Damascus, and the flourishing land near Homs and Aleppo, and a beautiful corner near the Mediterranean Sea.

Secretly, behind the back of the whole world, in agreement with Britain, France declared the territory of Syria and Lebanon its own in accordance with the so-called Sykes-Picot agreement, which split the Arab nation into many states that the leading European powers did not want to allow to become independent.

In 1920, France moved its troops to the Syrian capital, Damascus. At that time, the Syrian army had not yet formed, and Minister of Defense Yusef Al-Azme didn’t have many soldiers. The French general Gouraud naively and arrogantly thought that he would take the city absolutely without a fight.
But Yusef Al-Azme decided not to surrender the city without a battle. He knew that the forces are not equal. He has at his disposal hundreds of volunteer heroes, the French have a whole army, also well-armed, with the latest technology.

He said about his decision to King Faisal and, saying goodbye, gave him his daughter Leila to be raised. Going to his last fight, Al-Azme said: "Our honor will not be tainted only in one case: if blood is shed in her defense."

The Syrian commander with his small army advanced into the Meisalun gorge, 23 kilometers from Damascus, where the heroes had to repeat the Spartans feat in Thermopylae. July 24, 1920 took place historical unequal battle. Like the ancient Spartans led by the leader Leonid, all the fighters, along with the commander, were killed, but Damascus was not surrendered without a fight.

This battle marked the beginning of the anti-colonial struggle. With the first French occupier, who set foot on the Syrian land, there were also the first courageous people who challenged the terrible conquering power.

The puppet League of Nations recognized the occupation as legitimate, but the Syrian people refused to recognize the power of foreigners over themselves. A quarter of a century the resistance to the invaders lasted. In various parts of Syria, its patriots organized guerrilla groups that challenged a fairly strong French army. An army that could suppress pockets of resistance in a recalcitrant country, but which, as a result, was unable to protect even its own country in the face of advancing fascism.

France repeatedly promised freedom to the Syrians, but all these promises for a long time turned out to be empty. So, in 1936, France pledged to give Syria independence by 1939, but then refused to ratify its own decision. In the 1940 year, ironically, France itself was already under the occupation of the fascists, and Syria came under the authority of the pro-Hitler regime of Vichy. Then the troops of the French Resistance, led by General de Gaulle, entered the Syrian territory. And only after that France agreed to grant Syria the long-awaited independence.

17 April 1946, all French troops were evacuated from the Syrian land, and on the same day an independent republican government was created.

Now, more than half a century later, the political heirs of Vichy have actually come to power in France. Only now they serve the new Fascism and put on that right-liberal (like Sarkozy), or even a pseudo-socialist mask (like Hollande). In fact, regardless of the mask, the essence of these "figures" is the same - they like to be puppets in the hands of the United States and NATO fascism.

And today, they are again trying to establish their influence in Syria, overthrowing the legitimate government and President Bashar Al-Assad, putting their obedient puppet tied to them with dollars, euros and blood. It is not for nothing that Hollande’s regime is one of the leading proponents of lifting any restrictions on supply weapons Syrian terrorists, called the "opposition", calling on the EU to lift the embargo imposed by it, which was introduced to isolate the legitimate government, but it was an unexpected obstacle to the supply of the "opposition" militants.

The Syrian people again resist the plans of the neocolonialists, again paying for it with the lives of their best sons and daughters.

In the capital and other cities explosions thunder almost daily. Mortar shells destroy buildings, killing and maiming people. Every day, tears flow of mothers and wives, whose sons, husbands, loved ones have been kidnapped or artfully shot in the street. But, as Yunna Moritz wrote, “these creatures are Hitler's cynical. They are the human rights talk. ” And indeed, all the evil deeds, all the colonial plans, all the aspirations to seize another country - all this is covered with trustworthy slogans of "protecting democracy and human rights."

In Syria today you can’t see the past sweep with which this holiday was previously celebrated. Because of the danger of terrorist attacks, mass events are not held. But no terrorist attacks can erase this day from history.

The Arab Socialist Renaissance Party issued a statement saying that the Syrians again have the will to fight for an advanced state and do not accept any foreign interference in their internal affairs.

The statement stressed that what is happening today in Syria is an attempt by the new colonialists to pursue the same policy, but with the help of new tools and instruments. This is a desperate attempt to subjugate this noble nation, accustomed to fighting with enemies.

The party added that the current struggle of the Syrians against the external enemy and their will to national dialogue for unity is the way to salvation. Syria’s victory over terrorism will help save the world from this most dangerous epidemic.

The SAR Ministry of Foreign Affairs issued a statement strongly condemning the position of France. This country, after 67 years after the withdrawal of its troops, is trying to intervene in intra Syrian affairs. The Foreign Ministry said that the people of Syria will never allow France to return to this land, despite the fact that it is trying to do this by supporting and financing puppet terrorist groups. France, which is an accomplice in the shedding of the blood of the Syrians, has no right to evaluate the Syrian internal problems, the statement said.
The most blasphemous thing is that some of the collaborators-terrorists are trying to privatize the image of the Syrian hero, the first defense minister, Yusef Al-Azme, who fell in an unequal struggle with the French colonialists. However, this is not the first time in history - in the same way, Libyan pro-Western rebels tried to cling themselves to the image of the great fighter with the Italian colonizers Omar Al-Mukhtar, and even earlier Cuban counterrevolutionaries - puppet USA - took the image of the hero José Martí for their propaganda.

And while the terrorists, on the one hand, are adopting the bright image of Yousef Al-Azme, these same groups blew up a monument to the hero at the General Staff building in Damascus on September 26 last September.

One thing can be said: if Yusef Al-Azme were alive, he would have challenged all this terrorist trash who receives money from the occupiers. As the previous Minister of Defense, Daoud Rajha, who was insidiously killed in the July 18 2012 terrorist act of the year, challenged her. Today, Syrian President Bashar Al-Assad, who heads the struggle of the Syrian people against the superior forces of neocolonialism and has been winning this struggle for more than two years, is now challenging the terrorists and their external patrons.

Ctrl Enter
Noticed a mistake Highlight text and press. Ctrl + Enter
We are
The armed forces of Syria on the eve and during the uprising in the republic (2011 — 2013)Syria: Americans scare themselves, and Asma Asad buys chairs
33 comments
Information
Dear reader, to leave comments on the publication, you must to register.