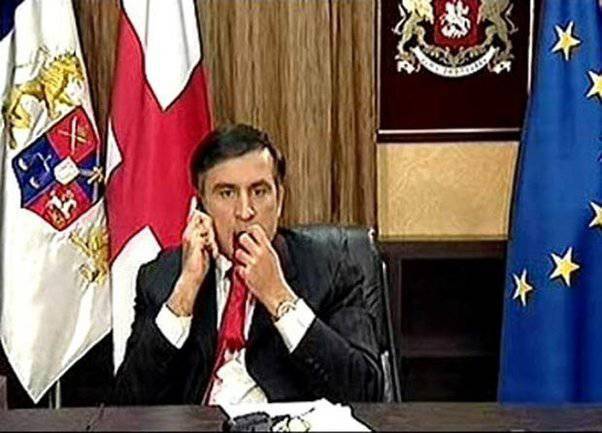 Mikhail Saakashvili revealed the details of the start of the August 2008 war of the year and the role that the United States played in it. The Georgian president said that George W. Bush was seriously considering the option of attacking the Russian army, but he did not dare to do it. He also admitted that “dear Kondi” advised Tbilisi not to get involved in this war.


Georgian President Mikhail Saakashvili spoke about some of the details of August 2008 of the year.

In particular, he admitted that the then US Secretary of State Condoleezza Rice had warned him that Tbilisi would not get involved in a war with Moscow. “Then I answered her like this:“ We will not get involved, Condi, dear, but what will you do if they enter anyway? ”To this she replied:“ I don’t think they would do that, ”he told the television channel Rustavi-2.

Saakashvili revealed the details of his talks with George W. Bush. “When the Russian army was already on Tbilisi, Bush called me. He asked me: “Well, how are you there, Misha, is not so good, is it?” I answered him: “The way I feel, no longer matters. Tomorrow I may not be, but I think that you should not feel good either, because the Soviet Union collapsed during the rule of your father, and if during your presidency the army enters Tbilisi, the Soviet Union will be restored. And what about you then write in stories? ”To this, Bush replied:“ Wait, I have a meeting, ”Saakashvili conveyed the dialogue, adding that after this conversation, the United States decided to send its fleet to Georgia.

According to him, "the United States seriously studied the possibility of bombing the Roki tunnel," through which Russian troops then came to the aid of South Ossetia, ITAR-TASS reported. “And I very much regret that the United States did not make such a decision,” he stressed.

At the same time, Saakashvili said he was ready to answer questions from the parliamentary commission about the events of August 2008. “If a parliamentary commission is created, then I am ready to come to parliament and answer all the necessary questions, but when this topic is discussed by the country's prosecutor’s office under the Criminal Code, it gives different results,” he added.

The intention of the parliament to re-conduct an investigation into the events of August 2008 was announced last week. “It is not yet known specifically in what form this commission will function, but it will definitely be created. The public should know what events preceded this war, what was happening, what made the situation worse, ”said David Saganelidze, head of the parliamentary majority formed by the Georgian Dream coalition.

A similar commission, created a month after the end of the Georgian-Ossetian war and the conduct of a military operation by Moscow to force Tbilisi to peace, in the 2008 year concluded that Russia had been planning an “attack on Georgia” for several months. “For several months, the relevant services of Georgia received signals about the preparation of the Russian military operation, but the analysis of the expected dangers was not made at the required level, and therefore the scale of the military operation by the Russian Federation was unexpected for the Georgian authorities,” its conclusions said .
But the conclusions of their colleagues seemed doubtful to the new parliamentary majority. As Saganelidze emphasized, the commission then “did not give answers to the indicated questions”. “The answers that the previous authorities gave to the public were PR and an attempt to hide the real situation,” he stressed.

In addition, the Ministry of Justice of Georgia did not even rule out earlier that Saakashvili could be interrogated, as well as a number of high-ranking officials in the case of this war. “The Prosecutor of the Hague Court received a lot of information, according to which citizens and representatives of various foreign NGOs complain and state that high-ranking officials of different ethnic origin committed a crime - allegedly either against humanity or a crime that could be qualified as a war crime. We have to solve our problem ourselves, our task with the prosecutor is to investigate the 2008 war case of the year, ”the head of department Teya Tsulukiani said earlier.

Saakishvili himself, in response to this, stated earlier that he “neither as the President, nor as a citizen of Georgia, does not intend to cooperate with the investigators in studying issues related to the August 2008 war of the year”. “This investigation aims to shake the statehood of Georgia and is directed against the territorial integrity of the country, serves to complete the tasks of the enemy of Georgia,” he stressed.

Ctrl Enter
Noticed a mistake Highlight text and press. Ctrl + Enter
We are
66 comments
Information
Dear reader, to leave comments on the publication, you must to register.