Europe in the crescents 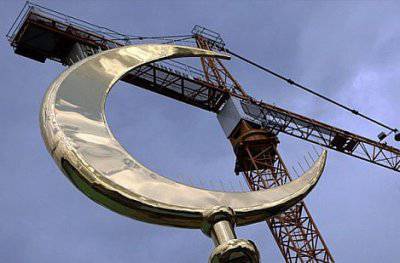 Analysts believe this year will set a record for the number of mosques being built in Europe. "Vesti" they write that mosques are being built in Greece, Spain, Germany. In Ireland, one of the largest Muslim temples is being built - for 64 million euros. Megame-cheek will soon be built in Belgian Liege: with a library, café, shops. Giant cult complex worth 40 million euros will soon replenish Munich. Even the Greek bankrupt government is going to spend a million euros to build the first official mosque in Athens. One after another, minarets grow in Luxembourg, Switzerland, and Spain. What is going on? In essence, nothing new: the same European Islamization.


Greece stands out against the background of other countries for the construction of mosques. Note that in this country a grave economic crisis is rampant; this country needs constant credit injections from the EU; in this country not so long ago, some elections followed others, riots in the cities, young people threw Molotov cocktails at policemen, thieves robbed shops, banks and temples, and some barbarians cut down the remnants of Plato's olive oil - just for firewood.

Islam News, referring to the newspaper "Ethnos", reports that the Athens authorities are going to build one or even two mosques in each area of ​​the city. Fifteen Muslim temples may appear in the capital of Greece at once.

The mayor also said that this issue was raised by him at a recent meeting with the Minister of Education.

At the construction of the mosque (by the way, the cost of construction is estimated at almost a million euros) insisted living in the Muslim community, numbering more than 300 thousands of members. The construction was opposed by Metropolitan Seraphim of Piraeus, who applied to the State Council with a demand to recognize the law on the construction of a mosque approved by parliament as “completely anti-constitutional and anti-Greek”.

Greece is a very special case, says the historian. According to its Basic Law (Section II, article 3), “the religion that dominates Greece is the religion of the Eastern Orthodox Church of Christ. The Orthodox Church of Greece, which recognizes Jesus Christ as its head, is inextricably linked in its dogmas with the Great Church of Constantinople and with every other one Church of Christ, unswervingly, as well as they, the holy apostolic and conciliar canons and sacred traditions ", and" The church regime existing in certain areas of the state does not contradict the provisions of the preceding paragraph ”, and, until recently, the construction of“ non-Orthodox and other prayer houses ”was extremely difficult, and in maintenance of mosques (ie the worship buildings with minarets) was forbidden by law. The preamble to the Constitution is short: instead of a series of pompous phrases, only "In the name of the Holy, Unified and Divisible Trinity".

Greek legislation, says Comrade Vershinin, is a unique precedent in the Christian world. It is based on a direct appeal to the Creator in its Eastern Orthodox interpretation. The latter is understood as the core of the unity of the Greek people and their statehood, which corresponds to the worldview of the overwhelming majority of Greeks.

Comparing this fact with information about the construction of a mosque in Athens and the plans of the mayor’s office in the near future to build another dozen more “prayer houses with minarets”, draw conclusions, the historian concludes.

Thus, Metropolitan Seraphim of Piraeus, who declared about unconstitutional, knew what he was talking about.

According to "DELFI"referring to “EuropeNews” and the portal Semitsa.ru, the former Kapernaumsky church in Hamburg will be converted into a mosque. In Scotland, the episcopal parish of St. John in Aberdeen became the first in Britain to agree to share their premises with Muslims. They can pray there in church five times a day.

In the Basque town of Portugalete (Spain) 21 March, Muslims opened a mosque. According to statistics, every fourth Basque is against the construction of mosques in his area, and every fifth would not like to have a Muslim neighbor, the data "DELFI". The mosque was open despite protests from local residents,

In Valencia, the Ahmadi community has opened a new mosque 29 in March. The spiritual leader of the community Hazrat Mirza Masrour Ahmad said that, according to his information, in two decades the number of Muslims in Spain will double. There is a possibility that Islam will again dominate the country.

And in tolerant France a mosque was opened for sexual minorities in November last year. There is no separation between men and women. Joint prayers are held in the hall in the Buddhist chapel.

Pavel Svyatenkov (KM.ru) asked a question: how serious is the problem of Islamization? The author singled out two of its factors: the high birth rate, the reinforcing role of Islam in Europe, and the fact that modern Muslim countries are outside European civilization, that is, in fact, are in relation to Europeans in a state of barbarism. The journalist considers barbarism “the use of technologies of civilization against civilization itself without a profound change in its own society”. Some leader buys swords from Rome and then uses them against Rome. Russian people of pre-Peter the Great in Europe were also considered barbarians. China was barbaric during the reign of Mao Zedong. To the current barbaric states, the author referred North Korea. The problem of Islamic states, the journalist notes, is that “they have not yet succeeded in creating an acceptable political model for them - such that people can live in accordance with the Koran, but at the same time in modern society”. As an unpopular example, the author calls Iran, both a modern and an Islamic state at the same time. But in Egypt, where the Muslim Brotherhood came to power, there are big problems: how to manage the country, the lion's share of the income of which is brought by tourism? After all, according to the norms of Islam, women should be wrapped up from head to toe.

According to Comrade Svyatenkov, Muslims should find their own model of building a modern society that will allow them to get out of the state of barbarism, located on the outskirts of European civilization. After all, Islam was not always in a similar condition. The medieval Muslim civilization was higher in level than the European one.

“Europeans should not build Europe with mosques, but help Muslims find themselves and make a civilizational transition. As fertility declines, Muslims will increasingly resemble Europeans. The Muslimization of Europe in the present circumstances does not solve the problem of transition to civilization and, moreover, slows down this transition.

It is on this European experience that the “dear Russians” should also think about, who are also being offered in a massive order to start building huge mosques and importing migrants. Not the construction of mosques and the importation of Muslim citizens of other states, but the creation of conditions for the transition of the world of Islam to modern civilization - this is a real task, the solution of which should be addressed to the “whole world”.

Yes, just add on our own, an extremely atomized, individualized world does not want to engage in solving real problems. To adapt as best as possible, to snatch a piece as much as possible, and after us even the grass does not grow, this is the only task that the current members of European societies have more or less successfully accomplished in a narrow timeframe, starting with their rulers.

As for the "importation of Muslim citizens", then they do not need to be imported. They themselves will come and settle themselves. Regarding Russia about this recently wrote on "VO" wonderful journalist Alexey Volodin.

Observed and commented on Oleg Chuvakin
- especially for topwar.ru
Ctrl Enter
Noticed oshЫbku Highlight text and press. Ctrl + Enter
We are
Results of the week. “Why is the war going on? Do they not read newspapers? ”Geopolitical mosaic: the United States began to joke about the DPRK missile program, and the Russian president was in the Finnish criminal register
Military Reviewin Yandex News
Military Reviewin Google News
327 comments
Information
Dear reader, to leave comments on the publication, you must to register.