“Antelope” and “obsmetanenny” Anatoly Serdyukov acquire the status of the injured party? 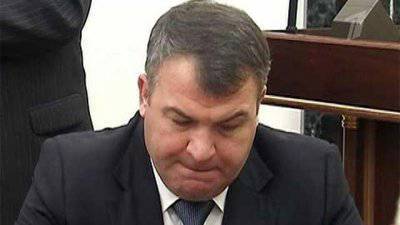 The Oboronservis case has recently accustomed Russians to the fact that more and more persons involved were found in it, fraud amounts were growing, new facts of selling those objects that were difficult for the Ministry of Defense to be called redundant. The snow "defense service" lump rolled down and at the same time noticeably added in size. And now, quite unexpectedly, this very lump suddenly sharply deviated from its original uncomplicated trajectory, jerking aside.


This impetus was given by the current head of the Ministry of Defense, Sergei Shoigu, to the investigation process. The Minister sent a letter to the Investigative Committee in which he asks the head of the RF IC Alexander Bastrykin to pay special attention to how the sale of the so-called 31 of the State Insurance Institute - 31 of the State Institute for Special Construction took place. The sale of the strategic object for the Ministry of Defense was the same Oboronservis, the top of which, according to Sergey Shoigu, misled the then head of the military department Anatoly Serdyukov.

In this regard, Shoigu asked the Investigation Committee to recognize the Ministry of Defense in this matter as the injured party, with a simultaneous seizure of 31 shares. At the same time, another acting representative of the main military department, Anatoly Shemet (deputy head of the department of claim and judicial law work of the Ministry of Defense) sent an appeal to the GVSU TFR, which calls for the collection of 277,16 million rubles from Evgenia Vasilyeva, Ekaterina Smetanova and Maxim Zakutailo in the case of the illegal sale of the specified military enterprise.

It is surprising that immediately after Minister Shoigu was addressed to Alexander Bastrykin, the Ministry of Defense itself was immediately declared the injured party.

It would seem that everything is correct - once the fraudulent scheme took place, then the perpetrators must be brought to justice and impose a "contribution" on them. However, this rather sharp turn in the Oboronservis case leads to other thoughts.

First, Sergey Shoigu’s own phrase that Anatoly Serdyukov (when he was at the helm of the main military department) “was misleading” looks rather dubious. Even if we take into account that Anatoly Eduardovich, God forgive me, had been singled, seduced and forcibly forced to err in the illegal sale of one of the numerous military enterprises sold by law, then how did the current defense minister become aware of this? He was silent if he knew about the "trouble" of his predecessors. Or did not know? Or the predecessor himself came to the current minister and asked: Sergei Kuzhugetovich, put in a word for me ... Or did Sergei Kuzhugetovich get a call on the “turntable” and ask him to put in the very same word for Anatoly Eduardovich? .. In general, you can guess for a long time, but weirdness in a rather unexpected statement by Sergei Shoigu about the misrepresentation of Serdyukov.

Secondly, if the Ministry of Defense is recognized as the injured party, then the main victim can also appear in it. Who is he? So it is known who. Anatoly Eduardovich Serdyukov himself. Well, at least, such a conclusion suggests itself from the words that it was he who was above the indicated three was misled: Smetanov and Zakutaylo were kept, and Yevgeny Vasilyev introduced this very mistake of the then minister ... Somehow. And if at least in one episode in the case of Oboronservis the former Minister of Defense changes the status of a witness to the status of a victim, then the end is the case, and who listened - well done ...

True, there are other episodes in the Oboronservis case, and not only Oboronservis, such as illegal sales of land in the Leningrad Region, fuel base on the Kola Peninsula, construction of roads and landscaping of dubious recreation facilities, and free receipt from the Anapa authorities of a land plot for the construction of a radar station with the subsequent (extremely unexpected) sale of this very site to out-of-the-ground counter companies, a scam with the repair of “military” VIP-class vehicles, an advertising campaign on “sales e untargeted property ”of the Defense Ministry in the mainstream media and the Internet, multi-million“ modernization ”of the website of the main military department, involvement of military personnel in non-core works and much, much more.

More recently, one of the episodes of defense property theft was delayed by another madam, namely, Mrs. Egorova, who managed to simultaneously occupy 4 at the same time leading positions in organizations affiliated with the same Oboronservis. At the same time, according to a number of Russian publications, headed by Irina Egorova, the company belonged to either Evgenia Vasilyeva or Valery Puzikova. This, obviously, is about the companies "Hydron" and "Vector-SPb". After the start of work, Yegorova as head of several companies, to their accounts, according to the version, the investigation, has flowed impressive amounts. Moreover, they flowed from the accounts of companies that were used by the former management of OAO Oboronservis itself to perform a certain type of work. The multistage intermediary scheme led to the fact that the budget of the Ministry of Defense missed 100 million rubles. Now, they decided to take Irina Egorova into custody, arresting him on suspicion of committing a crime under Article 159 (part 4) “Fraud on a large scale”.

Well ... The number of suspects is growing by leaps and bounds. It is to them that, apparently, they are to become the main plunderers of “socialist property” by a court decision. Feel that all the strictness of the Russian laws is called ... And this means that they can “thunder” for several years behind bars and Egorov and Smetanov and all the other birds of low flight, and, for example, Anatoly Serdyukov will be finally recognized as “debuted”, “cleared out” "And victims in all episodes of this" long-running "case.

It also draws attention to the fact that the amounts that are called as part of the episodes of the case, rapidly lose their zeros. A couple of months ago, it was dashing billions, and now - more and more millions. Accident? ..

Ctrl Enter
Noticed a mistake Highlight text and press. Ctrl + Enter
We are
Sit, but at home. Evgenia Vasilyeva arrested in the case of OboronservisPolitical Wrestling: Bulk vs. Bastrykin
217 comments
Information
Dear reader, to leave comments on the publication, you must to register.