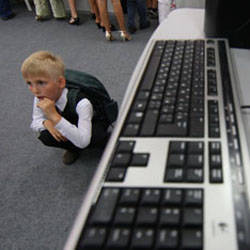 About how we were taught in the USSR and what kind of education we have today - an interview with Peter Shchedrovitsky, a member of the board of the North-West Center for Strategic Research Foundation North-West.


The ghost of the Soviet educational system does not leave the country. Whatever happens in the field of education, we necessarily compare with what happened during the Soviet years: funding, programs, the level of teachers. What was the reality of education in the USSR? This, of course, is about 60 - 80's.

Petr SchedrovitskyA: The first thing we have to realize today is that the educational MMM was an extremely important aspect of the Soviet project.

Soviet education was the real pyramid. Imagine an ordinary representative of the third generation of Soviet industrialization: his grandfather was a peasant, his father was a skilled worker, and he himself was an engineer. This is a classic structure. How does an ordinary family perceive what is happening in these conditions? Definitely like a social elevator. In 60 and 70, many already felt themselves to be representatives of the Soviet "middle class", and immense horizons of the scientific and technological revolution opened up before the next generation.

The number of engineers and graduates in the postwar period has been steadily increasing, universities are working on their production, and getting higher education for children becomes the main thing in every Soviet family. At this point, no one asks themselves what will happen next when 100% of high school graduates become engineers. Why I say that this is a pyramid. The fact is that such a model can only be viable under one condition: if the economy is simultaneously globalized in a Soviet way and these tens of millions of scientists and engineers living in the territory of the Soviet Union become "golden millions" for the countries of Asia, Africa, Latin America and Eastern Europe. For countries that are in 70 - 80-s enter the cycle of catching-up industrialization and take the socialist model of development as a role model. Then the model works.

Was there a perspective for this model, in your opinion?

In fact, the USSR and its education system could have only one development scenario: to become the leader structure of some kind of global world cooperation of countries. On such a scale, the most advanced part of the USSR population could specialize in “high” activities — scientific research, engineering and design work, high-tech services, and the education system — to maintain the quality of human capital. That is why it was so important during this period to create the CMEA and "help" developing countries in different parts of the world.

However, do not forget that this process occurred in conditions of constant and intensifying competition with another center of power that acted in a similar way - the United States. The competitor realized much faster that selling a lifestyle is more important than selling goods, that “liberalism” as an ideology of industrialization is a more popular product than “Marxism”. And that education, as a channel to future successes, is more profitable to sell to Indians and Chinese at home than to donate for free, as this was done by the USSR. The intellectual support of US leadership claims proved to be more effective than propaganda of "developed socialism", and with it the Soviet engineering solutions in space, aviation, atomic energy and automotive.

And then, as we know, the competition of the two countries, which are identical in terms of claims to global leadership, ends in the defeat of one of them. History the loss of the USSR has not yet been comprehended by anyone and is not described, unfortunately. This is a matter of the future. The result is important: at that moment when the Union was in the position of a loser, all the systems supporting and supporting it were doomed. Including the education system.

Of course, such cataclysms do not occur simultaneously. Before our eyes, Soviet institutions have been dying for more than 25 years and will continue to die. It is important that the pyramid collapsed. She did not have anyone to train all those specialists she produced for the megaproject of globalization in the Soviet way. And the new government - no matter what - was forced in some form to cash out the problem. At first she says: "We do not need so many engineers." Then: "We do not need so many lawyers and economists."

Unbelievable lawyers and economists are the product of the first post-Soviet years. The so-called "managers" are the product of the 2000's. Our universities, designed for completely different scales and development prospects, in the 90-s under the guise of education began to sell a certain package of myths to people losing their jobs. Former teachers of scientific communism have been named marketing teachers, untrained psychologists have been made experts in cinema ...

Not insanity, and self-preservation system. Any system tends to survive. And since people live in the head with the old Soviet model of a social elevator, they traditionally see their children above themselves: "I am an engineer, and he must be a manager." Only it is not clear what they all will manage, these 20 - 30 million managers.

In 90-s, almost all universities created a huge number of branches in the regions, offering semi-unemployed people a modern "education": economic, legal, and managerial. This is air trade, in essence. The system began to preserve itself, parasitizing on residual social moods: "Our children should live better than us." And which way to live is better? Education. What kind of education? Ideologists of the rapid transition to the "capitalist model of development" say that lawyers and economists. And how to cook them? We have not done this before. Hence, social mimicry: the remaining teachers of scientific communism who are out of work, who are following the course of management and marketing, a sharp deterioration in the quality of education. As well as an ordinal increase in the number of universities and their branches, in fact - the sale of diplomas and consumer fraud.

And what could be done now?

Think. This problem situation includes at least two levels. First, can there be advanced education in a country that has lost global competition? Imagine that I am a simple person and I want to engage in the development of aviation. But I see that the planes on which Russian aviation flies are foreign. If some projects are even being launched in this area, then these are projects in niche markets: for example, military and transport aviation still maintain their positions.

Can there be a good education in a country where there is no good industry? It is necessary to clearly understand that education, in many respects, is the industry creating the image of the future. Prestige and social status in the field of education plays no less a role, and perhaps more, than its technological and substantive basis. Preparation, as the most important technological process in the field of education, is inseparable from work experience and student participation in real projects. Therefore, there can be no educational reform outside the formation of industrial policy and the definition of a country's place in global chains of the division of labor and cooperation.

And the second level of this problem?

And the second point: education is therefore “education”, because in order to form, it is necessary for a person to give a picture of the world, his image. The word "education" comes from the medieval lexicon of Christian pedagogy. And the picture of the world is what is called ontology in philosophy, that is, the idea of ​​how the world works.

In the USSR, this function — pictures of the world — was performed by Marxism. We are not discussing whether it is good or bad, but it was. It explained everything: the political system, and economic prospects, and the competition of world forces. There was historical materialism, dialectical materialism, and even "the chemical form of the motion of matter." It was a real ontology - a harmonious idea of ​​how the world works. She was ruined. A new picture of the world did not work out.

After all, the picture of the world is, among other things, the basis of values. What can be tools without values? What are we learning now? Where is the answer to the question about the nature of certain phenomena, about cause-effect relationships that permeate the world around us? Instead, it is a collection of random data, pulled from popular literature mixed with horoscopes. What kind of education can be in these conditions? Education is the path to the image of something. We are in a situation of "ideological", as they say now, but not really an ideological, but an ontological vacuum.

Ctrl Enter
Noticed a mistake Highlight text and press. Ctrl + Enter
We are
In defense of the pasta monster Ilona Mask put in a word. Part of 1Siberia - New Central Russia, or How the South of Western Siberia Will Become the Center of New Industrialization
74 comments
Information
Dear reader, to leave comments on the publication, you must to register.