Yevgeny Primakov: “Some in the government want to take an American matrix as a sample” 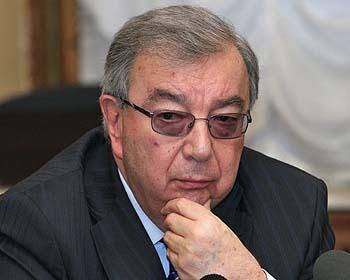 One of the winners of this year’s prestigious Demidov Prize was the head of the Center for Situational Analysis of the Russian Academy of Sciences.


I could not miss the opportunity to once again meet with a wonderful man, a scientist and a statesman. And the events in the world are pushing to talk with academician Primakov.

- Yevgeny Maksimovich, you are the only person in the country who, I think, can explain what is happening. Rolling revolution in the Middle East, North Korea threatens to start a war with America, the rebels in Syria and so on. It seems that we live on a powder keg?

- I have to do a little excursion into the past. During the Cold War, everyone believed that a nuclear collision was impossible, since there is a danger of mutual annihilation. It was a nuclear deterrence system. Now some of my colleagues believe that such a doctrine is outdated. I do not think so, because if there is no parity, then we can dictate some conditions. And all politics was built on this. But then there were calls that were not envisaged. Some thought that a new era had arrived, when the tail was driving the dog ... But this is not so. Still, the world is ruled by the great powers that are members of the UN Security Council, plus India, Brazil, and so on. However, processes began that were constrained by the confrontation of the two systems. Both we and the USA were interested in stability. I witnessed two wars - first as a Pravda correspondent in Cairo, and then as a scientist who was sent to the Middle East during the political crisis there. Then the Americans and we did our best to stabilize the situation. And we managed to do this.

I mean the six-day war of 67 and the war of 73, when the Arabs for the first time, at the first stage, achieved great success. Kissinger then outwitted everyone. He wanted Sadat to achieve a small victory, and then put both parties to the negotiating table. If there were no “victory”, then no one would talk to Sadat and ...

As for the current situation, many contradictions of an ethnic and religious nature are reflected. Speech, they say, is almost about the struggle of civilizations. I disagree with that. If this happened, then she would have acquired some new forms. But this does not happen. Of course, the logs in the fire throws the United States. But Obama is different from his predecessor, who made decisions sometimes spontaneously. However, in the United States are processes that do not depend on a particular president. In some circles there still believe that there is a unipolar world system. Although this is far from the case.

“They clearly lack the Soviet Union ...”

“They just consider themselves the strongest power.” However, this is the case: the United States in economics, military power surpasses all countries. However, this is not a guarantee of the existence of a unipolar world. There is the same China, which rose very much. Essentially, he already has the second economy in the world; in the foreseeable future, it may overtake the US economy. It looks like the world today. If you try to predict the future, I do not believe, as some political analysts suggest, that the world will also become bipolar - the United States and China, as I am convinced that China will not pose a military threat to the United States. I do not believe that China will rely on the military aspect in its relations with its neighbors.

- Do China and the United States complement each other today?

- Only economically. China, in my opinion, will never catch up with the United States in the development of science, there is a lot of "secondary" in it ...

- Is it possible to be friends with everyone in our world?

- It is impossible, but you can work. And need to. The world is very complicated.

- Some believe that the Third World War has long been underway. This refers to the Arab countries. And the Americans are waging this war.

- “The Arab Spring” is first of all unprofitable for the Americans. The previous regimes organized them because their leaders fought against Islamic extremism, against terrorists. "Spring" began spontaneously, but its distribution in Arab countries is already connected with the latest technologies - the Internet, television, and other communications. The Islamists "saddled" this process. Their organizations took control of the situation, and this must be considered.

In general, I believe that we pay little attention at the state level to situational analysis, although I am the head of such a Center at the Academy of Sciences.

- As far as I remember, when you became prime minister, you immediately asked the Academy of Sciences to analyze the situation and soon received a detailed document that greatly helped the country's withdrawal from the terrible crisis that Russia found itself in.

- Is it different now?

- Situational analysis is a brainstorming, when experts express different points of view, there is a discussion. As a result, a document appears in which does not mean at all that only the majority opinion is reflected. It necessarily presents all points of view. We prepare analytical notes and present them to the leadership of the country. Last year, we received thanks for one of the analyzes of a specific situation. But now our documents come to the assistants, and already they decide whether to report them or not. I believe that when there is no close connection between the leaders of the country and the expert community, this is a major drawback.

- And who is to blame for this?

- And how did it happen that such a gap formed?

- Our neoliberals, as I call them, believe that the state should not be present anywhere at all, they say, everything must be privatized. Neoliberals, for example, are now expanding private enterprise in education, medicine and other areas related to the creation of human capital. I think this is deeply wrong and even vicious, as they eliminate the state from real life.

By the way, I was operated not so long ago by the same surgeons with whom the neoliberals are fighting. Although they are not inferior in their skills to the best surgeons in the world. When I needed the operation, I didn’t even have the idea to go somewhere. And they, poor fellows, give birth to their children in England or America, are treated in Germany.

- Let's go back to international affairs. So, familiar to you firsthand the Middle East. Your forecast?

- He is on the surface. If the existing regime finally collapses in Syria, then chaos will come. There will be a further destabilization of the entire region. Negatively, everything that happens can tell on our former Central Asian republics, especially after the Americans leave Afghanistan. There, too, there is a basis for a radical Islamist movement ...

- Now I ask as the head of foreign intelligence: what should she do today?

- It is necessary to study the situation and reveal the true picture to the management. We must, of course, know our opponents well. Intelligence is always necessary. By the way, as soon as I was appointed head of foreign intelligence, I was immediately invited to the United States. An exchange of visits took place. They told me, they say, “perestroika” happened, a new Russia appeared, why do you need intelligence? I agreed: let's reduce our intelligence services, but we will do it under mutual control. Plus, it is necessary to reduce the structure of NATO, as you will receive information from them. That was the end of the talk. Well, of course, intelligence is needed so that the policy was verified.

- And the last, topical: what will happen to the Academy of Sciences in the light of recent events?

- These our reformers claim the role of Peter the Great. Only he created the Academy of Sciences and the university, and they are trying to cover them.

I consider it wild nonsense if the RAS is liquidated. I remember how Americans were desperately jealous of us that we have it. But some people in the government want to take the American matrix as a model, their fundamental science is developing in the institutions that are located at universities, which is simply unacceptable for us.

I have already seen with my own eyes one document in which it was quite seriously proposed that the development of physics, chemistry, cosmonautics, rocket technology and other industries be determined by the government, and not by the RAS. And it's just awful for science.

The conversation was led by Vladimir Gubarev

PS In exactly the Day of Cosmonautics, the children of three orphanages in the Urals received a gift - computer classes. So ordered his Demidov Prize Yevgeny Maksimovich Primakov.