US Navy amplified by helicopter drone 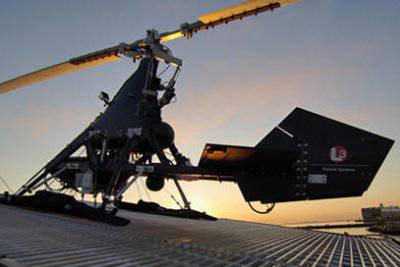 The US Navy announced a desire to purchase L-3 Valkyrie reconnaissance drones, combining the helicopter’s maneuverability with the speed of an airplane. The cost of one unit is $ 1mln.


Valkyrie has released the company L-3, which supplies equipment to the American the fleet. The UAV belongs to the family of gyroplanes - rotorcraft, whose blades rotate under the influence of aerodynamic forces. Due to this, gyroplanes surpass planes and helicopters in safety - in the event of a motor failure, the drone does not fall, but gradually decreases due to the autorotation effect.

Valkyrie is a purely reconnaissance UAV, it can be launched from the ship and ascend to an altitude of 1,5 km. During the flight, the drone camera covers up to 53 km of space. The case of the device is made of carbon fiber.

A month ago, the US Navy bought 14 helicopter-type MQ-8C Fire Scout drones, each weighing 2,7 tons. They will go into service in 2014 year. This large drone is designed to explore and transport cargo to 450 kg. One helicopter can be airborne for up to 24 hours. The armed version of the MQ-8C uses air-to-surface missiles. All drones will be armed with a special-purpose marine force.