April 17 2013
57
Today, the air defense forces of the Islamic Republic of Iran (IRI) are armed with a large number of Soviet, Russian and foreign-made air defense systems. All this is due historical factors that were characteristic of this country and region in the late 1970s, as well as the desire of the military-political leadership of the country to build their own effective weapons models, while borrowing advanced foreign technologies.


Back in 1972, the Iranian Air Force Command signed a contract with the United States for the supply to the country of 24 batteries of advanced Hawk air defense systems. The amount of the contract amounted to about 280 million dollars, it was the largest contract ever concluded with the US Rocket Command at that time. Such a big deal was due to Iran’s desire to develop as soon as possible a single, effective air defense system that would protect the country from air aggression. But these plans did not come true. 4 November 1979, Iranian revolutionaries seized the American embassy in Tehran, which led to the rupture of all military contracts between states.

In 1980-ies, Iran did not make any significant purchases of air defense systems, with the exception of shipments to Iran of batches of missiles for Hawk, which ironically were shipped from Israel and the United States during the Iran-Iraq war. In addition, information about the supply of Chinese-made HQ-2 SAM systems (later the complex was modernized and received the designations Sayyad-1 and Sayyad-1А) appeared in open sources, it is still in service. With the end of the 8 war, Iran once again became interested in building an effective air defense system. 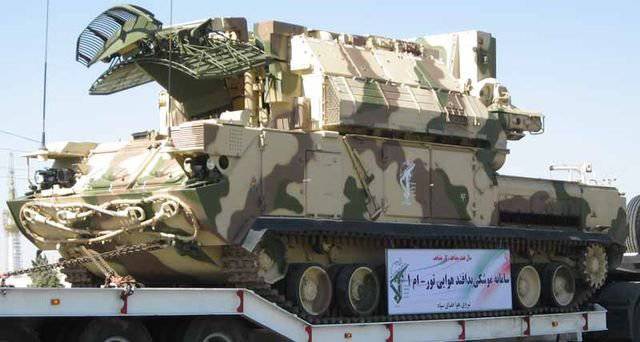 LAW "Tor-M1"
At the same time, a shift in priorities occurred, the Iranian military turned their attention to Soviet-made military equipment, namely the SA-6 Gainful air defense system. In 1990, the first Cube "Cube" stood on combat duty. The choice in favor of this complex was made because it showed itself well during the war between Israel and Egypt in the 1973 year. At the same time, at the end of the 1980, Iran acquired the C-200 (SA-5 Gammon) air defense system from the USSR. It is this complex that forms the basis of the Iranian air defense and has the greatest range of destruction of air targets.

According to information from Iranian sources, which refer to Brigadier General Farzad Esmayili, Iran has achieved quite significant success in modernizing its C-200 air defense system. Most likely, with the modernization of these complexes, Iran did not go without outside help. As a possible developer and performer of the C-200 modernization program, a number of analysts refer to the company Tetrahedr OJSC from Belarus, which was born in 2001, and specializes in the modernization of Soviet-made air defense systems. This company has a license to carry out independent foreign economic activity through the MTC of Belarus with foreign countries. 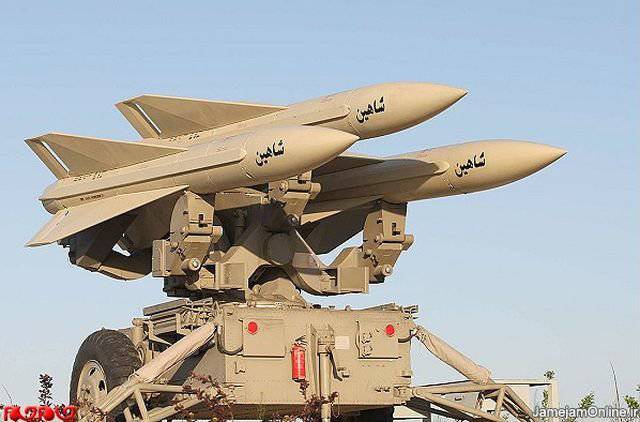 MERSAD air defense system
In addition to the Cube air defense system in the middle of 1990, Iran acquired various batches of Soviet air defense systems: the C-75 Dvina (SA-2 Guideline) and the Strela-2М (A-7 Grail). In addition, Iran has acquired a number of Chinese air defense systems - HQ-2J / 2B, which are a clone of the Soviet C-75 complex. Tehran also purchased the Rapier 30 PU ZRK from the UK, as well as the Tigercat 15 PU, created by South African specialists. At the same time, Russia delivered the Tor-M1 SAM system to Iran ”(SA-15 Gauntlet), but in 1995, under US pressure, Russia froze for a time its military cooperation with Iran. This mainly affected the supply of modern weapons systems. For this reason, Iran was forced to turn its attention to cooperation with China, the DPRK, as well as the development of its own air defense missile systems.

In 2003, Romania delivered to Iran a batch of the “Cub” air defense missile system, and then Tehran again began to increase purchases of air defense systems of the Russian assembly from other states. At the same time, in 2006, he managed to acquire in Russia 29 Tor-M1 complexes, which made it possible to significantly improve the air defense system of the most important Iranian objects: Tehran, Bushehr, Isfahan, etc. In 2008, the CIA, citing reliable sources, reported that Iran’s arming at least 1 is a Boeing-707-3J9C aircraft, this is a Boeing-707 transport aircraft converted into an DLRO aircraft. According to the Americans, this aircraft can be used in the interests of Iran’s air defense, since a complex of modern high-performance equipment is installed on board.

In addition, there is information that India has sold the Feldermaus shooting control system to Iran, which is intended for use with Oerlikon GDF-35 anti-aircraft 001-mm anti-aircraft guns. According to some information, these systems can replace the SkyGuard radar, which Iran acquired before the revolution (24 pieces). In addition to the already mentioned 35-mm "Oerlikon" in service of Iranian air defense are "Shilka", ZU-23-2 and ZPU-4 - all of Soviet production. 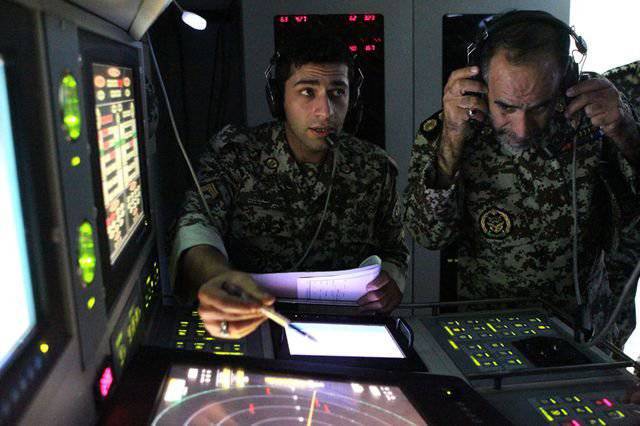 At the end of September 2011, Iran announced the adoption of the Mersad complexes, which were created on the basis of the American Hawk complexes. According to the information available, these complexes are able to hit targets at a distance from 70 to 150 km. This complex uses the same medium-range Iranian missiles: “Shahin” and “Shalamcheh”. According to the Iranian military, the latter are capable of speeds up to 3-x Mach numbers. According to representatives of the country's Defense Ministry, these air defense systems are highly dynamic and able to hit air targets even in the conditions of active electronic countermeasures from the enemy.

According to information available in open sources, currently, the radar detection and tracking system of Iran’s targets is represented by the 24 radar, which are located along the perimeter of the borders of the Islamic Republic. In addition, 2 radar located in the cities of Arak and Isfahan. Approximately 1 / 3 from all radars is located on the coast of the Persian Gulf. At present, there is no reliable information about the location of the modern Russian ZRPK Pantsir-С1 (obtained by re-export through Syria), but with a high degree of probability it can be argued that they are used to cover the most important atomic facilities of Iran. 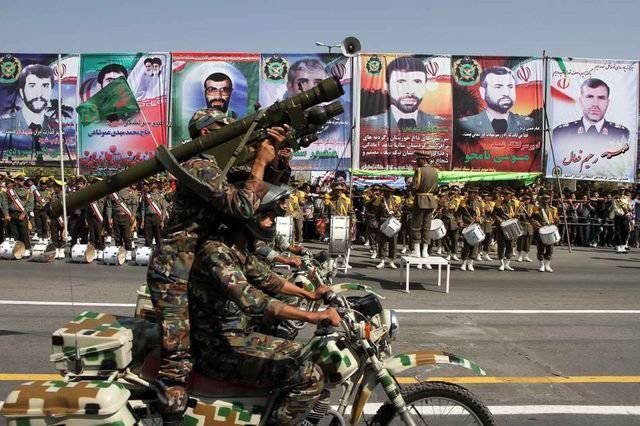 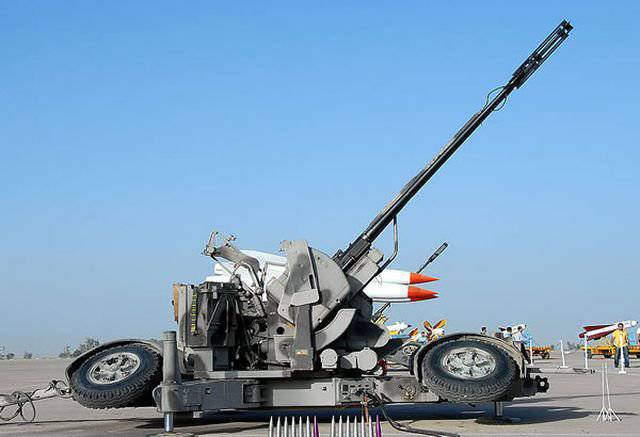 35-mm Oerlikon art mount
If we take into account the air defense system of the near and medium range, then their number and performance characteristics allow us to say that they are able to repel the attacks of cruise missiles of a potential enemy. But only in the event that these complexes will not be previously wrecked by means of delivery of weapons that will not be included in their zone of destruction. Many military experts are unanimous that clear, well-coordinated and effective actions of the Iranian air defense forces are capable of thwarting the enemy’s plans to eliminate the air defense system in the very first days of mass rocket attacks and bombings. At the same time, the disruption of plans for a lightning war can significantly affect the course of further events and cause a negative reaction in the aggressor countries.

According to Yury Bondar, a Russian military expert, the Iranian air defense system is outdated, but it is able to cause much trouble to Israel or the United States. Gradually, Tehran is adopting an increasing number of new types of weapons. According to him, Iran has well developed UAVs and robotics. At the same time, both tactical and operational and operational-strategic apparatuses. Apparently, they created (most likely, simply copied the Russian) “buildup” systems of anti-radar SD. And that means they are able to protect their own radar. Let a lot of their military equipment and air defense missile systems - this is yesterday, but all this is in working condition.

The second important point is the mountainous terrain of the country, which facilitates the use of tactical air defense systems, such as the Kub (Square), Tor-M1, and Tigercat air defense systems as operational and strategic means. When placed in the mountains, they can become a threat even to strategic aviation - reconnaissance aircraft and bombers. At present, Iran’s air defense is literally one step away from modern requirements that will make any air attack on the country very dangerous and ineffective.