Numerical superiority is not always a guarantee of victory. 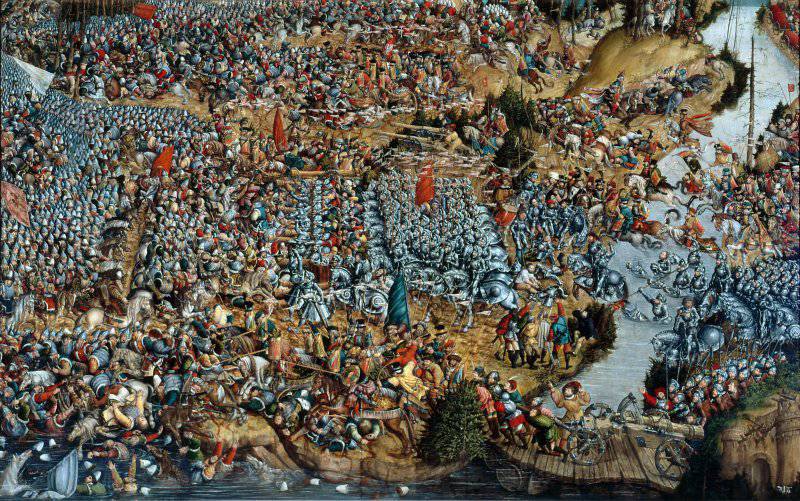 In military textbooks on tactics and strategy (and not only Russian), it is noted that creating numerical superiority over the enemy in the main direction of the strike is considered one of the main conditions for success in battle.
The strategy of any military campaign is developed on the basis of an estimate and analysis of the time, place of the battle and the number of troops. These are the main factors determining the outcome of any battle. Each of these factors has a huge impact on the outcome of the confrontation. Any of them affects the course of the battle and its consequences. Tactics affect the course of each particular battle, giving their tactical settings.
Victory in battle, of course, depends on the numerical superiority, which is an important parameter of the battle, but the success of the battle is no less dependent on many other circumstances. According to military analysts: in order to reduce the level of influence of other factors of a battle, numerical superiority in the decisive direction should be as large as possible. But even in this case, do not forget about the morale, military valor and talent of the generals, which can significantly affect the outcome of any battle. An example of this is the victory of Frederick the Great over the Austrian forces at Leuthen. 30-ti thousandth army of the German commander defeated 80-ti Austrian army. Also, Frederick the Great with 25-ti thousandth army won a convincing victory over 50-ti thousandth allied army of France and Austria under Rosbach.

In addition, it should be noted that in the military confrontations that took place in the 18 century, the size of the army was not decisive. In the surviving chronicles of those times almost never mentioned the number of troops.

The number of troops on an extremely important sector of the front is undoubtedly one of the decisive factors of victory, but this parameter greatly depends on the absolute size of the troops, as well as on the ability, more precisely, on the art of using it.

Many historians were interested in a kind of paradoxical idea that there is a concept of the optimal size of the army, and if the number involved in the battle exceeds the value of "normal power", then this circumstance may be detrimental to the overall battle strategy. AT stories There were many examples of the fact that all the available forces were not involved in the battle, that is, the commanders did not see in the numerical superiority of the decisive factor of victory.

Note that the size of the army, as a rule, does not depend on the requirements of the commander himself. In determining the absolute number of troops involved both the government and the conditions prevailing in the country during the formation of the armed forces. Therefore, each commander in the development of his battle plan, always comes from the available number of troops, because he is not given the right to set its own number. In connection with this circumstance, the majority of military leaders, using their military experience, try to achieve relative numerical superiority over the enemy in the decisive sectors of the battle, regardless of the absolute value of the size of the entire army. And in this case, such elements of the strategy as the choice of the place and time of the strike become decisive in determining the tactics of each particular battle. The decision-making process is the highest military art of the leadership of the armed forces to achieve victory over the enemy.

In order to correctly determine the space and time of impact, it is necessary to take into account and correctly assess the forces and capabilities of your opponent, take the risk of temporary visual weakening of forces in the direction of the main attack, be able to organize forced marches and covert movement of troops, be able to prepare and conduct sudden attacks, to invest in the soul of every soldier the idea of ​​victory.

Frederick the Great and Napoleon have always used the tactics of concentrating superior forces in the decisive phase of the battle. As talented commanders, they were able to give a correct assessment of the chosen direction, sacrificed a minor for the sake of achieving the ultimate goal.

It is impossible to say with certainty that the indispensable condition for victory is numerical superiority over the enemy. This is a necessary, but not sufficient condition. Only a real comprehensive assessment of the situation will make it possible to take the right decision - to join the battle or abandon it because of the possible risk of losing not only the army, but also hope to win in the future.

For example, the Greek-Macedonian army of Alexander the Great consisted of a small number of highly trained and well-armed fighters. Alexander's victories are related to the fact that he changed the battle tactics that existed during the reign of his father. He used the concentration of his military forces in the attack on the weaker flanks of the enemy. Simultaneously with the heavy infantry, Alexander the Great organized lightly armed detachments. One of the reasons for his remarkable victories was the use of a tactic of lightning, sudden strikes against the enemy's army.

However, it is necessary to note the fact that both Bonaparte and Friedrich were losing battles to the enemy, who had a significant advantage in numbers. It follows that the talent of the commander is not always able to lead to victory when he meets with numerous opponents.

It must be said that any strategy of military success lies in the positive result of the implementation of tactical victories. There are a number of factors that ensure success or at least contribute to it: the advantages of the terrain, the suddenness of any actions, including creating superiority in combat strength for the enemy, leading attacks from several directions, strengthening positions and rear, raising the morale and morale of the fighters, getting support from the public.

The defender has an advantage on the ground, but in the arsenal of actions of the attacking side, the most productive practice is the surprise attack. And if, moreover, the enemy makes a serious mistake, the attacking side will get a sufficiently convincing chance to win and the number of the advancing army in this case does not play a decisive role. In order for the size of the army to become the decisive factor on the battlefield, it is necessary to introduce as many troops as possible at the most crucial moment. This principle applies to any army in the world: the British, French, Greeks and Germans, etc. The difference between them is in the talent of the commander and the military prowess of the army.

Based on the conclusions of the Russian military experts, the modern Russian army should be no more than 1 million people (as of 2012, 800 thousand people served in the country's army). Experts believe that an increase in the number of Russian Armed Forces over a million people is inappropriate for the country.

Changes taking place in the world require an adjustment of the strategy and tactics of military operations. And, of course, these changes concern the determination of the required size and composition of the armed forces of each country individually.