West fears Russian exercises near the borders of Poland 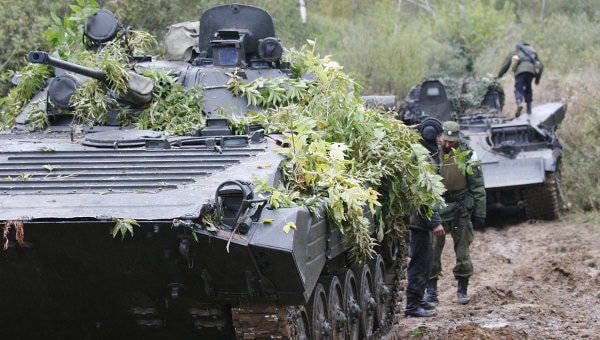 Recently, politicians and the media in Poland and the Baltic countries began to actively discuss the upcoming Russian-Belarusian “West-2013” exercises this fall. The fact of the exercise causes serious concern among the political elites of Poland, Lithuania and Latvia, who intend to push Russia to “openness and transparency when planning and conducting the upcoming maneuvers.”

The discussion in the Western media began with statements by the former deputy minister of national defense of Poland, Romuald Sheremetyev, who in mid-January declared that Belarus and Russia were preparing for an attack on Poland. According to the ex-official, the next joint military exercises "West-2013" testify to the presence of Minsk and Moscow's intentions to work out the plan of attack on Warsaw.

Later, the current Foreign Minister of Poland, Radoslaw Sikorski, spoke in support of Sheremetyevo. He noted that the previous exercises "West-2009" were a provocation against Poland. Also, the head of the Polish Foreign Ministry declared the readiness of the Polish armed forces to conduct exercises as part of NATO in the territory of their country.

The topic was continued by Juozas Olekas, the Lithuanian Minister of Defense, who expressed an opinion about the hostile orientation of the Belarusian-Russian exercises planned near the Lithuanian border. Although at that time there was no official information about the plan of these exercises and the forces involved in them, the Lithuanians managed to assume that according to the “West-2013” scenario, they would resemble the West-2009 doctrines that sharply criticized. Then, according to the Lithuanian Ministry of Defense, the legend of maneuvers, in addition to the invasion of the Allied ground forces on the territory of the Baltic countries, also included a preemptive nuclear strike on Warsaw.

Concern over the upcoming military exercises also expressed the Minister of Defense of Latvia Artis Pabriks. According to the Latvian side, the teachings of such a large scale receive very scant information. At the same time, Latvia hopes that "clarity regarding the exercises will be introduced in May at the summit of the heads of the armed forces of NATO and Russia."

To date, according to unofficial information, which is voiced in the Polish edition of “Polityka Wschodnia”, about 2013 thousand Russian and Belarusian servicemen will take part in the Zapad-20 exercise. Among the variants of the exercises, a preventive nuclear strike on Warsaw is considered. Military experts also do not rule out attempts to violate Polish cyberspace. Such a demonstration of force, according to the publication, can cause not only a psychological effect, but also bring actual damage to the attacked countries. From this point of view, it is significant that the NATO Cyber ​​Security Center is located in Tallinn, and the Americans constantly state the need to enhance digital security. In addition, the Polish newspaper Polska mentions “threats of Moscow” by Iskander missiles located in the Kaliningrad region.

Thus, politicians in Latvia, Lithuania and Poland express concerns about the unreasonably high military activity of Russia in the Baltic region and require the military leadership to work out the interaction of NATO forces stationed in the Baltic countries.

In this context, in 2013, NATO plans to hold a series of military exercises near the Russian borders. The largest of them will be the military exercises on collective defense "Steadfast Jazz 2013", which will be held in November this year. at the tank range "Dravsko" near the city of Szczecin (Poland). According to experts, these will be the largest military maneuvers in the last 20 years. The exercises will have a pronounced anti-Belarusian and anti-Russian character, since the main goal of the maneuvers is to work out a large-scale strategic offensive operation in the east, blocking the Kaliningrad region, isolating the Russian Baltic fleet.

On the eve of the “Steadfast Jazz”, the Polish Armed Forces will develop skills in the operational and tactical exercises of the Dragoon-2013 ground forces with the participation of the 16 armored division of the Polish Armed Forces. The exercise of the air force "Orel-2013" is also planned; in addition, joint Polish-Lithuanian maneuvers of the airborne forces "Maple Arch 2013" will be held.

Currently, according to estimates by foreign military experts, in the western direction, the NATO combined forces are superior to the Russian armed forces in tanks 9 times, by planes 5 times, and also (which, perhaps most importantly) has absolute superiority in long-range cruise missiles of various bases and in general in high-precision arms.

In addition, the North Atlantic Alliance is confident that they are superior to Russia in terms of quality indicators of the armed forces. According to the estimates of NATO analysts made public at the time by WikiLeaks, the West 2009 exercise demonstrated that “Russia has very limited ability to carry out operations involving aviation, and also relies on old and unusable weapons. Her army cannot operate in all weather conditions. Not enough strategic vehicles. ”

Outdated equipment, low morale, insufficiently developed comradely relations between soldiers, an aging officer corps, which can no longer act flexibly, all this, according to NATO analysts, gives reason to speak of the Russian army as a “colossus on clay feet.”

Obviously, these findings gave ground to NATO Secretary General Anders Fogh Rasmussen to declare 2 February this year. in Vilnius about the West-2013 exercises, that the alliance "does not see Russia as a threat." At the same time, the buildup of the military activity of the bloc near the Russian borders is justified for the internal audience of NATO member countries by the increased military threat from Moscow.

Thus, it is necessary to state that a propaganda campaign has now begun in the Western media, the purpose of which is to show the aggressive aspirations of Russia and Belarus towards the Baltic States and Poland. The main audience for which such influence is exercised is the population and military personnel of their own countries, as well as Russia and Belarus. Thus, the military-political leadership of NATO seeks to justify the significantly increased own military activity near the borders of Russia.

Ctrl Enter
Noticed a mistake Highlight text and press. Ctrl + Enter
We are
The agony of Lithuanian RussophobesHow Latvia pragmatically and constructively cooperates with Russia
121 comment
Information
Dear reader, to leave comments on the publication, you must to register.