April 17 2013
23
The experience of local conflicts of the last decades of the last century showed that the available infantry weapons do not always meet the requirements of the time. For example, in the fight against the Afghan or Chechen armed formations, anti-tank rocket launchers and grenades often had excessive power. The cumulative effect was simply useless, and the high-explosive and fragmentation effect of anti-tank ammunition did not ensure reliable and guaranteed defeat of the enemy. In the nomenclature of armaments of some units of the still Soviet armed forces there were jet flamethrowers, but the remaining fighters were forced to use only weaponswhat was available to them.


According to the results of the first war in Chechnya, it finally became clear that the troops needed a new jet weapon. His development was engaged in GNPP "Basalt". When creating a new type of weapons, two basic requirements were taken into account. First, it was necessary to minimize the price of weapons, since by that time the financial condition of the army left much to be desired. Secondly, it was necessary to ensure the maximum possible power of the ammunition during the shelling of manpower, shelters and lightly armored vehicles. It is these two factors that ultimately shaped the look of the new weapon.

In the light of recent wars, the main purpose of advanced weapons was the destruction of long-term firing points and similar fortified structures. For this reason, the new system received the general name "Reactive assault grenade" or RSHG. The word "grenade" in the name appeared exactly for the same reasons as in the case of anti-tank RPG-18 or RPG-22. It was supposed to make jet assault ammunition disposable, which, in accordance with the nomenclature of armaments adopted in the country, was designated by the word "grenade".

In the mid-eighties, the RPG-26 Agleni and RPG-27 Tavolga anti-tank grenades were adopted by our army. They differed from the previous grenades of their class with higher characteristics, as well as the possibility of reverse conversion from the combat position to the traveling one. The previous grenades did not have such an opportunity. For several years, the Soviet defense industry was able to master the mass production of new reactive anti-tank grenades. This is probably why the Basalt employees decided to make new RSHGs on their basis.

As a result of the modernization and processing of anti-tank ammunition, two versions of assault grenades appeared: RSHG-1 and RSHG-2. During their creation, the designers tried to achieve maximum unification both among themselves and with anti-tank grenades.

The RShG-1 rocket assault grenade is a revised system of the Tavolga RPG-27. The launch device of the assault grenade almost completely preserved the appearance of the anti-tank grenade device. When finalizing, only the sights were changed, which was due to a different ballistics of the flight of ammunition. The rest of the starting device remains the same: a folding pipe made of fiberglass, closed at the ends with rubber caps. When fired, the latter are destroyed. Before firing, a fighter must pull out a safety check, spread out the sights and push the launch tube. During these procedures, firing mechanism is triggered. The shot is made using a special lever. The soldier has the opportunity to transfer the grenade from the combat position back to the marching position. To do this, the trigger mechanism is removed from the platoon, and the sights are folded and fixed by check. 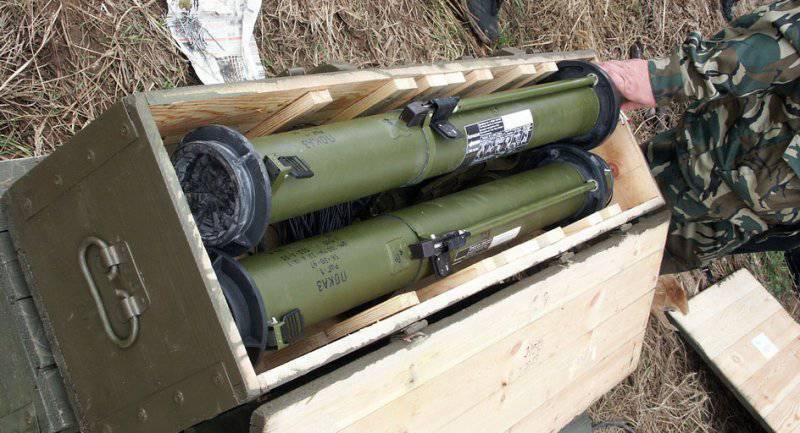 The greatest interest in the RSHG-1 system is its ammunition. It was created based on RPG-27 and TBG-7В rounds (ammunition for RPG-7 grenade launcher). From the first they took the tail end with the jet engine and stabilizers, from the second - the warhead. The result was a jet ammunition caliber 105 millimeters, carrying thermobaric warhead. An interesting feature of it is the use of a leading cumulative charge. If necessary, he breaks through the protection of light-armored vehicles, after which the fuel mixture weighing 1,9 kilograms comes into play. Its high explosive effect, depending on the specific conditions, is equivalent to 5-6 kilograms of TNT.

The grenade itself is ejected from the starting device using a solid propellant jet engine. The amount of charge is chosen in such a way that it completely burns out before the grenade exits the launch tube. Thanks to this, the shooter does not risk getting burns. At the same time, a dangerous zone with a radius of about 90 meters is formed behind the trigger in a sector of width 30 °. After exiting the grenade tube, the tail stabilizers are set at an angle to the flow. They spin the ammunition and thereby ensure its stability on the trajectory.

105-mm RSHG-1 rocket grenade weighs 8,3 kilogram and in combat position has a length of 1135 millimeters. A jet engine throws a grenade at a speed of 130 meters per second, which is enough to effectively hit targets at a distance of up to 200 meters. The maximum firing range is three times as long. The accuracy of the hit depends on the skill of the shooter as well as on external factors: side wind, target visibility, etc.

Simultaneously with the reactive assault grenade of the first model, a similar system was developed under the name RSHG-2, based on the Agleni RPG-26 design. As in the case of RSHG-1, the developments in anti-tank grenade were widely used. For example, the launcher received only new sights and retained all the other features of its design. The use of the RSHG-2 grenade is similar to the use of the RSHG-1 and RPG-26.

The main innovation in the RSHG-2 system was jet ammunition. Since the caliber of the original Aglein anti-tank grenade in the 73 millimeter was smaller than that of Tavolgi and, as a result, with the RSHG-1, the Basalt staff had to develop a new thermobaric warhead based on the TBG-7B shot. In fact, the combat part of the RSHG-2 grenade is a reduced grenade tank for the RPG-7 with a lower charge of the fuel mixture. Fuse remained the same. The warhead is delivered to the target using the tail of a grenade, borrowed from the RPG-26 system ammunition. The solid propellant charge pushes the grenade and burns completely before it leaves the launch tube. On a grenade trajectory, it is stabilized by rotation due to folding planes. The combat unit of the RSHG-2 shot contains about 1,15 a kilogram of a fuel mixture with a high-explosive action at the level of 2,5-3 a kilogram of TNT.

The smaller caliber of the RSHG-2 rocket assault grenade compared to the first model caused noticeable differences in other characteristics. So, a grenade ready for use weighs only four kilograms and is 770 millimeters long. The shot leaves the launcher with an initial speed of 144 m / s and flies to a distance of up to 350 meters. The effective firing range with a hundred meters less. 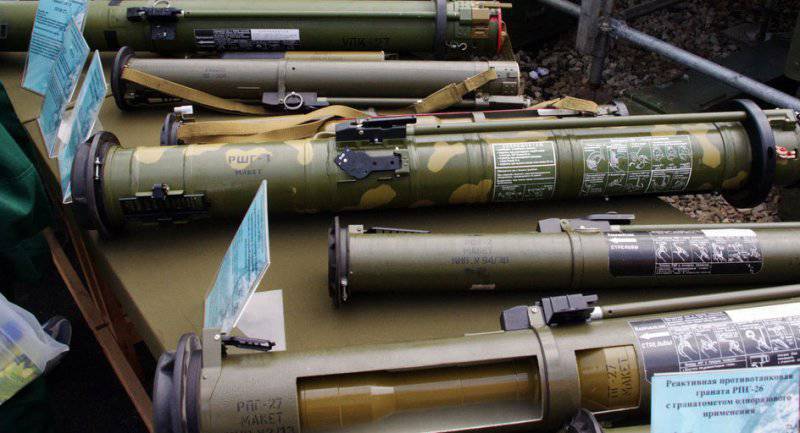 Both assault grenades are capable of striking enemy manpower, lightly armored and unprotected vehicles, as well as shelters. Thanks to the use of original shots, they are able to break through brick and concrete walls of relatively small thickness. This allows you to destroy the enemy inside the building without a direct hit in the window or doorway. Sprayed grenade fuel mixture allows you to hit targets both indoors and in open spaces. An additional advantage of the RSHG-1 grenade is the leading shaped charge, thanks to which part of the fuel mixture is guaranteed to fall behind a wall or armored barrier, which greatly enhances the effect of the ammunition.

In addition to the characteristics of the new assault grenades and have economic advantages. Due to the widest use of old practices and products developed in production, RSHG-1 and RSHG-2 grenades almost do not require changes in the technological process and can be produced on the same production lines as Agleni or Tavolga. In fact, for the assembly of assault grenades it is only required to start the production of new sighting devices and warheads for RSHG-2. All other elements of the systems are borrowed from existing ones. Another advantage of assault grenades was the ease of training personnel. A fighter who has learned to use anti-tank RPG-26 and RPG-27, is able to quickly master the use of RSHG-1 and RSHG-2.

The ease of production, low cost, ease of use and training interested the Russian army and in 2000, both grenades were put into service. Assault grenades of both models are mass-produced and delivered to the units of the ground forces. It is noteworthy that, in contrast to jet flame throwers, RSHG-1 and RSHG-2 are sent not only to the troops of radiation, chemical and biological protection, but also to other types of troops. According to reports, both models of grenades are widely used by special forces in counterterrorism operations. With their help, special forces destroy criminals hiding in fortified buildings. 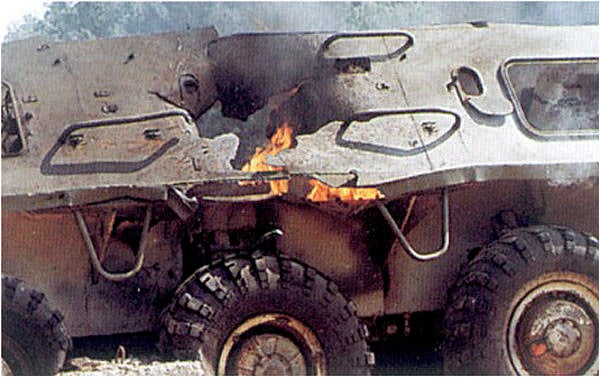 Impact of RSHG on BTR

Impact of RSHG on concrete shelter