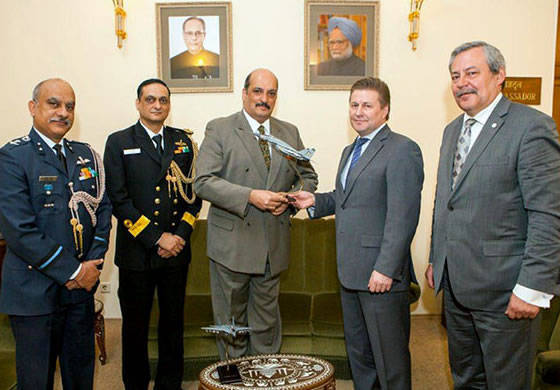 The embassy of the Republic of India in Moscow hosted a meeting dedicated to the 50 anniversary since the beginning of deliveries of the MiG-21 fighter jets to the Ministry of Defense of India. This event marked the beginning of the interaction of the two countries in the field of military-technical cooperation.


According to the press service of the RAC "MiG", in connection with the anniversary, Sergei Korotkov, Director General of the Russian Aircraft Corporation "MiG", presented the model of MiG fighters to the Extraordinary and Plenipotentiary Ambassador of the Republic of India in the Russian Federation Mr. Ajai Malhotra 29K and MiG-29UPG.

Speaking at the meeting, A. Malhotra noted that the half-century experience of joint work on MiG aircraft is a good example of the effectiveness of Russian-Indian military-technical cooperation, which is based on friendly relations between the two states.

In turn, S. Korotkov stressed that the Indian Air Force was among the first foreign customers to receive the most advanced MiG aircraft.

A characteristic feature of the key MiG fighter projects was the consistent development of scientific and industrial cooperation and technology transfer processes. In particular, the MiG-21 and MiG-27 combat aircraft were manufactured by Hindustan Aeronautics Limited (HAL) under license.

As the head of RSK MiG noted, in modern projects such as the MiG-29К / KUB and MiG-29UPG, national Indian structures act as full participants at all stages of the programs.

from December 2012 - the supply of the Indian Air Force modernized MiG-29UPG aircraft;

From December 2012, the - the beginning of deliveries of aviation of the Indian Navy MiG-29K / KUB under the contract 2010,

The announcement of the anniversary date is publicly available on the RAC MiG website.