While the United States talked about global security ...

April 17 2013
240
Against the background of the active phase of the Russian-American “list” confrontation, the American delegation, led by the Assistant to the President of the United States on national security issues, Thomas Donilon, unexpectedly arrived in Moscow. The delegation of high-ranking overseas officials also included Ms. Goethemuller, who is US Undersecretary of State for Arms Control and International Security. Donilon and Gethemuller were composed by the American ambassador to Russia, who had gone somewhat into the information shadow lately (apparently, due to the well-known “problems” of NGOs financed from abroad), notorious Michael McFaul.

What is the idea promoted by this American "bird-three" in Moscow? And the idea is the following: Mr. Donilon and his ilk, on the special assignment of President Obama, decided to raise the question of whether it is time to start reducing the amount of nuclear stockpiles weapons and reaching a constructive (according to the American side) position on missile defense (PRO). There is a visit, there are offers, but a strange feeling of some other overseas dirty trick also does not leave ... And why did we become so suspicious? .. But it turns out that it’s not just us.

Even American newspapers say Donilon’s visit to Moscow is untimely, as Russia’s rather vigorous discussion of the “final decision” adopted in the United States on the so-called Magnitsky Act continues. For example, The New York Times dubbed Obama's adviser's trip to the Russian capital awkward.

Obviously, the head of the delegation himself understood all the awkwardness of the visit, but, as they say, the party said: “I must,” Donilon replied: “there is!” As a result, an openly crumpled trip came out, during which the American side held talks with the Secretary of the Russian Security Council, representatives of the Ministry of Defense and the Ministry of Foreign Affairs. Of course, the delegates were aiming for a personal meeting with the Russian president, but even before Donilon and the company arrived in Moscow, the Kremlin’s press service reported that the meeting could take place only if Vladimir Putin had free time on his working day schedule. Such a correspondence answer to the American side hinted at the fact that if you are going to go to Russia, then forget about your wishes in terms of meetings with specific individuals: with whom we will allow - talk with those.

As a result, Thomas Donilon still saw the Russian president, but only the meeting was almost in passing. Vladimir Putin arrived at the Security Council, as if, by the way, and at that moment an adviser to the American president barely had time to give Putin an envelope with a message from Obama. Assistant to the President of Russia Yury Ushakov said that Vladimir Putin had a positive talk with the head of the American delegation, that he fit in with the positive essence of the letter that he (Putin) sent to him through Donilon Barack Obama. Without going into details, Ushakov said that the letter contained proposals from the American side to deepen bilateral dialogue and cooperation.

This raises the question: who was joking? - Yuri Ushakov or Barack Obama? What does “deepening” of bilateral cooperation mean? You can deepen that has at least some initial depth. The relations between Russia and the USA today, due to a series of overtly anti-Russian actions and the adoption of appropriate anti-Russian decisions on the basis of this, have dried up so much that there is simply nothing to deepen here.

Of course, in this situation, Obama believes that it is he who takes the first step and extends his hand to Russia to start a new “reset”, but it’s already dubious, let's say, the background of this call for deeper cooperation. The American special services allow themselves to be grabbed by Russian citizens without any international sanctions and permits, the American courts investigate cases against Russian citizens, guided not by testimony and evidence, but by scenarios of Hollywood films, the American guardianship service and law enforcement system are either sluggish or not at all react to the increasing incidence of crime against children adopted in Russia by American adoptive parents, the US authorities spit "from the high bell tower" to Russia yskie concern on the part of the US deployment of missile defense systems in different parts of the globe, well, and, of course, the US intervention in Russia's internal affairs, which is covered by a veil of alleged concern about human rights in Russia.

And then, you know, they declare to us that, they say, those who remember the old ... Well, they are good, you won’t say anything! At first - attempts to wallow in the mud, and right there - we are ready to “deepen” cooperation. Yes, for God's sake: you want - deepen, who's in the way? Demonstrate the first steps not in words and not in the epistolary genre, but in deeds. But so far it turns out this way: when, from a financial point of view, everything is relatively calm in the US, no official representatives come to the Russian Federation with proposals for cooperation, but as soon as it turns out that there is not enough money to develop a missile defense system (the decision to cancel final stage - the deployment of interceptor missiles in Europe), then immediately heard such words as “the need for dialogue”, “reduction of the number of nuclear warheads”, “constructive cooperation” and so on, sorry, crap, which tomorrow may be ten ü times revised by the United States. History “Partnerships” with the United States have already taught Russia that with this, forgive my God, partner, to negotiate something - it’s more expensive for myself: tomorrow they will be replayed, pereinachat and will say that this should be from a democratic point of view ...

It is noteworthy that when the visit of the American delegation, which touched on issues of world security, ended, this very security was subjected to a serious test already in the United States. Several explosions took place in Boston, as a result of which three people were killed and about one and a half hundred injured of varying degrees of severity. Two hellish cars were powered in close proximity to the finish line of the marathon that day. The organizers of the terrorist attack knew perfectly well about a major international event in Boston, and they also knew that television was broadcasting sports events live. Bombs were blown up when thousands of people were along the marathon distance. About an hour later, a third explosion struck Boston. The bomb exploded in the John F. Kennedy Library. The library building after the explosion engulfed fire. The American side does not report accurate data on the victims in this place of Boston. 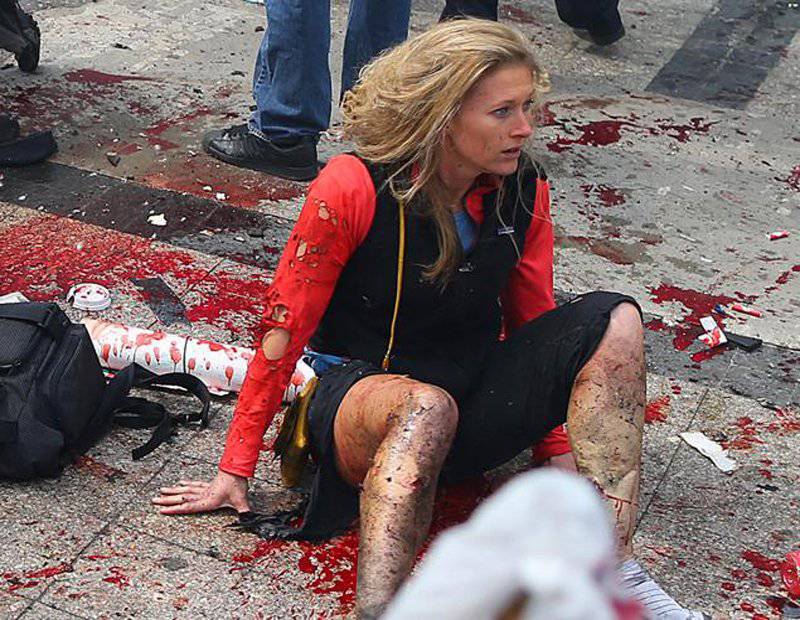 While the security services do not give an accurate assessment of what happened, and put forward several versions of who is the organizer of the terrorist attacks in the United States. If we talk about versions, the main one is the trail of radical Islamists. This version is prompted by the “handwriting” of terrorists - the initial double, and as a result - a triple terrorist attack, which was clearly aimed at a bloody outcome and attracting the attention of the world community.

The Boston terrorist attack itself has become the largest 2001 of the year for the USA, and clearly demonstrates that while the USA is conducting a witch hunt in different parts of the world and declare its readiness to hang a security dome over the whole “progressive” world, not everything is safe with the security inside the States okay. Therefore, Washington should really think about it and work on its mistakes of a geopolitical scale, if, of course, the Boston tragedy is not another reason for a new witch hunt from the US and not a reason for inflating the military budget of this state ...

Ctrl Enter
Noticed a mistake Highlight text and press. Ctrl + Enter
We are
Results of the week. "Who you are lucky, in fact, and will carry a cock, and such a bird as you, I, too, will rush!"Michael McFaul and Russian prejudices
240 comments
Information
Dear reader, to leave comments on the publication, you must to register.