April 17 2013
70
On "BBC" 16 of April was handed over: the Venezuelan electoral commission announced Nicholas Maduro the winner of the presidential election, a quote, “despite a small lead over rival Enrique Capriles and calls for a recount.” A very strange statement, it should be noted. That is, if you have a “small gap”, then you have no right to be considered a winner? .. The election commission reported that Maduro supported 50,7% of voters, and Capriles - 49,1%. In the 2000 year, we recall, the gap between Bush and Gore was much smaller: 48,847% versus 48,838%. 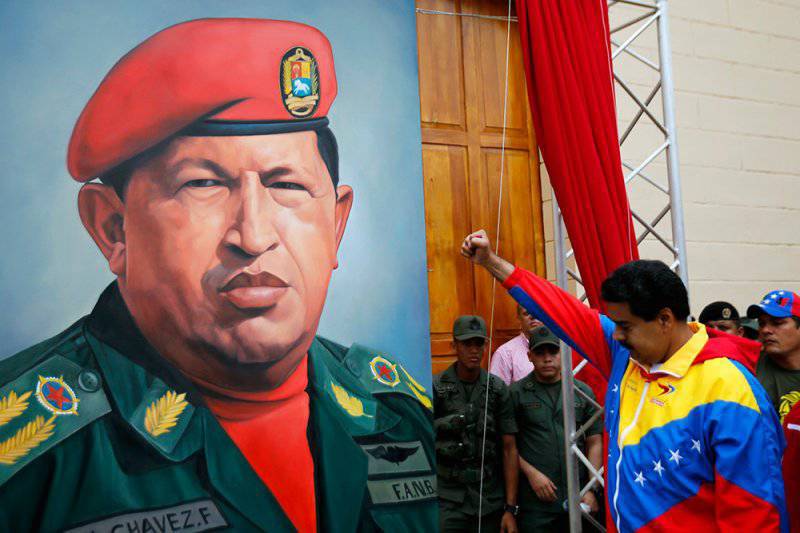 It became known earlier that the US authorities and the Organization of American States called for independent verification of the election results. “BBC” writes that Enrique Capriles said that no one should declare victory until the recount takes place. Opposition supporters took to the streets of Caracas, and the police used tear gas against them.

Meanwhile, at a rally of supporters in Caracas, comrade Maduro announced that he had won a "just, legal and constitutional" victory. His words are quoted "Euronews": “Capriles, I told you, I said publicly that if I lose by just one vote, I will recognize the victory for you. But it did not happen. I won by a margin of 300 thousands of votes. This is the decision of the people. ”

Opposition candidate whose words are cited by Mikhail Vasilyev (KM.ru), nevertheless, it does not recognize its defeat: “I never agree with someone illegitimate. We are talking about more 3000 violations committed during the elections. And I officially declare: you, Nicolas Maduro, you and your government are the losers. ”

Supporters of Capriles want all the ballots to be recounted. Until then, the opposition to refuse to recognize the election results. Capriles has already written on Twitter that the government intends to distort the "will of the people."

As for the winning side, Comrade Maduro agrees with the requirement of recounting: “They want a recount of votes, we welcome it. I officially asked the CEC to recount. ” Here M. Vasilyev notes with some irony that, announcing the election results, the representative of the National Electoral Council of Venezuela declared the voting results "irreversible".

(By the way, Enrique Capriles Radonsky, who advocates for recalculation and calls his opponent "illegitimate," could recall recent events, namely December events. December December 17 Alexander Reutov, columnist "Kommersant", wrote that in the elections in the state of Miranda, the incumbent head of state, Enrique Capriles, and former vice-president of Venezuela, Elias Jaua, fought for the governor’s post. Mr. Capriles won with great difficulty: with an advantage of only 0,35% of votes.

On Monday evening, the opposition of Venezuela arranged “pot marches”, reports "Sight" with reference to ITAR-TASS. Supporters of the leader of the Block of Democratic Unity Capriles led processions, rattling metal dishes and launching firecrackers. The demonstration of the opposition paralyzed the movement of vehicles on several streets. Opponents of Maduro carried posters with the words "Forgery" and "Recount".

Tear gas in Caracas was really applied: the fact is that the opposition provoked clashes with the police. Also “Vzglyad” specifies that the delegation of international observers published a report, according to which the electoral process in Venezuela was held at a high level and there were no violations during the voting. Observers called on all political forces in Venezuela to recognize the official election results announced by the National Electoral Council.

Andrey Ivanov ("Free press") believes that the recount of votes in the presidential elections in Venezuela could be the beginning of a coup d'état: an orange scenario is ready for the country.

Under Hugo Chavez, the analyst recalls, the state has achieved great success in the social sphere. The number of children attending school increased by 6 million, and the number of students increased from 895 thousand in 2000 to 2,3 million in 2011, the number of doctors increased fourfold. Child mortality has halved; The problem of child malnutrition was also solved. Unemployment has decreased. Chavez almost defeated poverty; when it appeared middle layer. In terms of the human development index, Venezuela moved up from 83 in 2000 to 73 in 2011. These successes, recalls Ivanov, the country was able to achieve, thanks also to the nationalization of the oil fields, which were previously almost entirely owned by American companies.

Experts know that the Venezuelan elections have always been considered the world benchmark for fair and open voting. In the counting of votes, duplication was used, eliminating fraud. Talk about election fraud, the analyst believes, looks like the beginning of a “color” revolution.

Valery Korovin, director of the Center for Geopolitical Expertise, interviewed by A. Ivanov, assumes that the United States has come to grips with the implementation of the coup in Venezuela:

“Elections have long been a tool for overthrowing unwanted US regimes. America’s allies may not worry at all about elections, they may not hold them at all. As it is, for example, make the monarchy of the Persian Gulf. Events in Venezuela must be viewed in a chain of a number of events. The previous link was the death of Hugo Chávez. In my opinion, it was eliminated during the American special operation. And not for that, the Americans removed Chavez, in order to lower his hands now and accept the continuation of his course. Capriles operates in the fairway of the United States. Recalculation is the trigger mechanism from which most color revolutions began in different parts of the world. We see a slight difference in voices in Venezuela. This indicates a fair fight. On the other hand, lets talk about small fraud. "

Korovin believes that the situation in Venezuela is "explosive." Americans are going to bring the situation to its logical conclusion. Challenging the result is part of the American plan. The recount should spill over into mass unrest, the expert says. If the calculation of peaceful protests fails, then the Americans will arrange an armed conflict. The militants will be brought in from Iraq and Libya, where they have ceased to find their use, the analyst draws a grim scenario. If Maduro does not hold power, Russia will lose Venezuela as a strategic partner: it will suffer losses related to investments in the oil industry, not to mention the collapse of the Kremlin’s foreign policy efforts in recent years.

Neil Nikandrov ("Fund of Strategic Culture") writes that the campaign headquarters Capriles, as expected, took advantage of the insignificance of the backlog from the winner.

“Along the social networks, along with allegations of fraud, appeals began to spread“ to resist attempts by chavista to steal the victory ”:“ Maduro lost the election! ”Maduro team condemned these statements as irresponsible:“ The opposition candidate should not aggravate the atmosphere fraught with confrontation ”. "To the followers of this gentleman (Capriles), we say:" Do not go crazy! "- said Jorge Rodriguez, head of the campaign headquarters of Maduro. “The automated voting system used in the elections in Venezuela is recognized worldwide as safe, reliable and transparent.” It is impossible to assign or withdraw votes in the voting process, the system has an integrated control system. ”

And the opposition took up "caserolazo", beating in pots and pans. Comrade Nikandrov writes that at the intersections, the barricades of automobile tires were puffed, and his faces were distorted by hatred on television screens. There were calls to rid the country of "Cuban agents" in the presidential palace, to purge the army, which "introduced the Cuban military."

And the thing is that the victory of Nicolas Maduro means the continuation of the course of Hugo Chávez on the development and deepening of the Bolivarian revolution. Maduro, like Chavez, is oriented towards socialism with a “Venezuelan face” - he stands for free competition of political forces in the country, but denies the neoliberal development model as a way to seize the country by transnational corporations.

However, many Venezuelans believe the promises of the neoliberal Capriles that with him everything will start to live even better, since he will use oil more correctly and stop “giving it to the allies of Chávez”. And they also believe that Capriles, too, will put an end to inflation, crime and corruption.

Now chavista celebrate victory - with fireworks in the sky. Nicolas Maduro receives congratulations. The first to congratulate him were the presidents of the countries of Latin America and the Caribbean.

The President of Russia also congratulated Comrade Maduro. The message from April 15 (11: 30 Moscow time) on the president’s website was it is said: “The head of the Russian state expressed confidence that under the leadership of Nicolas Maduro, Venezuela will continue to strengthen the strategic partnership with Russia, and also confirmed its readiness to further develop a constructive dialogue across the spectrum of bilateral and international issues in the interests of two countries and peoples.”

We note this: "in the interests of the two countries." The interests of any third country — for example, the United States, with its ideology of orange revolutions, which do not cover energy and geopolitical aspirations (by the way, the US gets 15% of oil from Venezuela), will not become part of the “constructive dialogue”. They are shining to fall into the category of the most unpleasant "international issues" with which the USA annoys the whole world.

Observed and commented on Oleg Chuvakin
- especially for topwar.ru
Ctrl Enter
Noticed a mistake Highlight text and press. Ctrl + Enter
We are
Results of the week. “And this gentleman is a member of the bazaar society, he sells souvenirs, you see, who will cheat”Results of the week. “Why is the war going on? Do they not read newspapers? ”
70 comments
Information
Dear reader, to leave comments on the publication, you must to register.