Why is a shale gas extraction agreement classified? 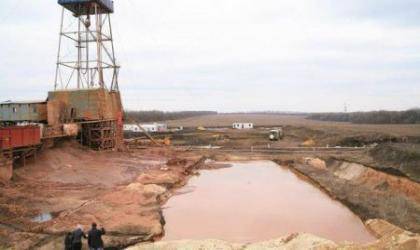 Numerous attempts by journalists to officially obtain from the Government of Ukraine the text of the Agreement between Ukraine and Shell and Nadra Yuzovskaya companies signed on 24 in January of 2013 in Davos about sharing production from shale gas in the Yuzovsky area has not yet been crowned with success. It turned out that the text is “classified” in order not to damage the negotiations being conducted with Chevron about the production of shale gas in the Oleskaya gas area. Nevertheless, literally the other day, the text of the Agreement, unknown in what ways, appeared on the Internet ... [1]


"We do not violate the laws"

It was not for nothing that we mentioned the “secrecy” of the Agreement with Shell: this fact itself is already a violation of the law of Ukraine “On access to public information”, since this Agreement is a document of great public importance. If only because it concerns the placement of environmentally unsafe production in the most densely populated region of Ukraine. However, environmental risks are a separate topic, which we will not discuss here. We are interested in the "weirdness" of the document itself.

Unsubscribing to journalists' requests that “secrecy” is connected with ongoing negotiations with another investor, Ukrainian officials, to put it mildly, were deceptive: article 33.3 reads: “The term of confidentiality. Without limitation on the use and disclosure of information contained in any other agreement, restrictions on the use and disclosure of confidential information are agreed by the parties in this 33 article, are valid for the duration of the Agreement and terminate upon expiration of 5 (five) years after or termination of this Agreement. ”

The notion of “confidential information”, specified in Article 1, includes all data on the selected Shell site, any data on the terms of the Agreement and the activities of the parties on its implementation, any discussions and decisions of the authorized state body responsible for cooperation with Shell. , the content and status of any budget or work program for each specific gas production section, all documents, data, information containing information on the work of Shell in its designated area. Including the results that the company will achieve. Well, since the aforementioned “authorized state body” is also responsible for making decisions in the event of a threat to life, health and the environment, it will not even have the right to inform people about this threat without disclosing information classified as “confidential”.

What the Ukrainian negotiators representing the state thought in preparing this Agreement is unknown. Nevertheless, they simply lied when they said that the state, signing the document, guarantees that “... the conclusion, transfer and execution of this Agreement does not violate any provisions ... of any Ukrainian legislation or regulations” (Article 29.1 (iii) (c)). They lied because such secrecy is in flagrant contradiction, as has already been said, to the law of Ukraine "On access to public information."

"Free of charge, which means a gift"

The desire for freebies comes from all the cracks of the Agreement. The freebie for the investor, the Ukrainian company Nadra Yuzovsk, is that this company does not invest its own funds, while having a share in 50% (article 2.4). A foreign investor (!) Pays for the Ukrainian investor: “4.12.1. According to the provisions of article 4.5, “A foreign investor will finance at an interest rate of 0% (zero percent) Nadra Yuzovskaya’s participation in oil and gas activities during the initial geological exploration period, which is provided for by the Initial Geological Exploration Program outside of any area development. "

The same applies to payments to investors to the state related to the start of various phases of work: “4.12.4. According to the provisions of 4.12.2 and 4.12.3, “a foreign investor will also finance Nadra Yuzovskaya’s participation interest on bonuses listed in 4.11, 5.7 and 5.8, and such costs are costs that are reimbursed by a foreign investor”. To the question, what is so fond of a well-known Ukrainian company that perfectly knows how to count money to British oil workers from Shell, we suggest searching for an answer yourself.

Free 4 million dollars for obtaining special permits for geological exploration and 5 million for using data gathering dust around the contract area gets the state. Then free bonuses are added to them: 25 million for signing the Agreement, 25 million for receiving the first gas, 50 million for starting the first development, 100 million for reaching the peak level of development (at least 20 billion cubic meters of gas per year). During the first year of the Agreement - 2 million as social benefits, in subsequent years - according to 3 million plus half a percent of the annual investment budget. One and a half million grants to Ukrainian universities for studying unconventional gas production methods. Not counting the real estate and technology, which is transferred to the state, after the need for a mining company has disappeared.

And, of course, free gas (from 40 to 60% depending on the costs of investors), remaining after gas extraction costs and bonuses paid by investors, as well as other, other, other… are compensated ...

If someone thinks that Ukraine will receive all these cakes from the Anglo-Saxons only for the sake of it, he will be deeply mistaken. Philanthropy the British never sinned. In exchange for bonuses (which, we recall, are reimbursed to the British by selling the produced gas), social contributions, grants and the need to make payment for the Ukrainian investor, Shell receives truly fantastic conditions for its business in Ukraine. First of all, both she and Nadra Yuzovska will not pay any taxes for fifty years, except for VAT, income tax and fees for the use of subsoil (article 28.1), except for taxes and fees charged on salaries to employees. Both companies are exempt from any other payments: “28.2.2. ... each of the investing companies within the scope of activities related to the execution of this Agreement will not be subject to taxation for land, rent for gas produced, duty, environmental tax, special use water charge, or target premium to the current tariff natural gas for consumers of all forms of ownership, fees for compulsory state pension insurance, including, among others, fees that are incurred when buying or selling foreign currency from mobile services oh communication, in the acquisition of real estate and transfer of ownership of cars. "

Moreover, taxes paid are not taxed on a general basis, but at reduced rates. For example, income tax will be charged in the amount of not 19, but 16% (article 28.5.17). Moreover, even if sometime later the tax rate rises for the whole of Ukraine, for our investors it will remain at the same level. Or go down with a general decline (article 28.4). According to the 28.6.1 article, the VAT for both investors will not be able to exceed 17% instead of the current 20%, even if the legislative base ever changes and all Ukrainian enterprises start paying more. But in the event of a delay in VAT refunds, the state of Ukraine will pay investors of shale gas production a penalty at the rate of 120% of the National Bank's discount rate (article 28.6.13). And indeed: “23.2.2. Any changes or additions to the legislation of Ukraine and regulations that are made after the date of entry into force of the Agreement [Dati Nabuttya Chinnost] that affect the position of the investing company or the position of the operator, including their expected economic benefits under this Agreement, do not apply to such a company as an investor or operator. " With the proviso that these changes do not improve the business environment of Nadra Yuzovskaya and Shell.

Both investors and the operator, which also acts as Shell, are not subject to any regulations and restrictions regarding foreign exchange and foreign trade operations: “22.2. The state guarantees that, starting from the date of commencement and throughout the entire period of this Agreement, investors-companies are not subject to any prohibitions or restrictions stipulated by the legislation of Ukraine and normative acts. ” Including - stipulated by the legislation for control over advance payments to foreign suppliers. Payment of services for large sums will also be without mandatory state expertise.

And the “sweetest” benefit for gas shale gas producers and investors is the complete absence of customs duties on imported and exported goods based on the 17.5 (j), (p), (q) articles. And the 28.6.17 article does extend this mode to any company, at least somehow “tied” to the companies listed in the Agreement, when it comes to cases of “importation by an investing company, operator, legal entity or non-resident contractor the territory of Ukraine of goods, including equipment, equipment, stocks, vehicles, spare parts and any other goods, including for the purposes of assembly, adjustment, testing, intended for use in the framework of oil and gas activities nosti ".

Do I have to tell you that now someone who has the right to trade imported goods will not have to arrange for luxury convertibles as humanitarian aid during transportation across the border?

The list of “interesting” provisions of the “secret” Agreement on the extraction of shale gas in Ukraine is not exhausted. Therefore, the continuation of his analysis will certainly follow and, we dare to assure, it will be no less interesting. However, even what has already been said is enough to understand: the reasons for the “secret” of the Agreement between the British and Ukrainian negotiators were plenty.

The text of the articles of the Agreement between Ukraine and Shell and Nadra Yuzovskaya on production sharing of shale gas production is translated from Ukrainian.