In the US, they are developing a convertible 3 generation

April 16 2013
82
At present, the United States is the only country in the world that is equipped with convertible planes. In service with the US Navy and Marine Corps is the convertiplane Bell V-22 Osprey. In the near future, he may have an alternative. Speech is about the convertoplane, which received the designation Bell V-280 Valor ("Valor"). The design of this aircraft was presented to the general public on 10 on April 2013. With the new V-280 project, the company is going to take part in the tender announced by the US Army to create a medium multipurpose convertoplane or helicopter, which in the 2030-ies will have to replace the fleet of obsolete UH-60 Black Hawk helicopters. The flying prototype of a prospective aircraft will tentatively have to fly into the sky in 2017.


It is worth noting that to replace the UH-60 Blackhawk, as well as the combat Boeing AH-64 Apache, which are in service with the US Army, the V-280 Valor is not the only option considered. Its possible competitors are now called a helicopter with coaxial propellers AVX Aircraft, a joint development of Boeing and Sikorsky, built on the basis of the experimental X-2 and a kind of aircraft under the abbreviation EADS, details of which are practically unknown so far. However, in case of success of Bell, V-280 Valor will be able to replace around 4 thousands of AH-64 Apache attack helicopters and BlackHawk multipurpose UH-60 helicopters. The convertoplan has the following advantages over these machines: high speed, increased flight range, the efficiency of the machine, according to the manufacturer, is 2 times higher than helicopters and their hybrids.

The US military has not yet made formal demands on promising converters and helicopters. At the same time, they nevertheless announced that the new aircraft would have to surpass all existing rotary-wing aircraft in terms of their flight range, speed, payload, fuel efficiency and ability to hang in the air. It is assumed that the new machine will be able to hover at a height of at least 3000 meters, as well as fly at cruising speed at a height of at least 9100 meters. At the same time, the development of such machines will require the creation of universal engines adapted to perform various tasks, as well as a system for providing pilots with oxygen. 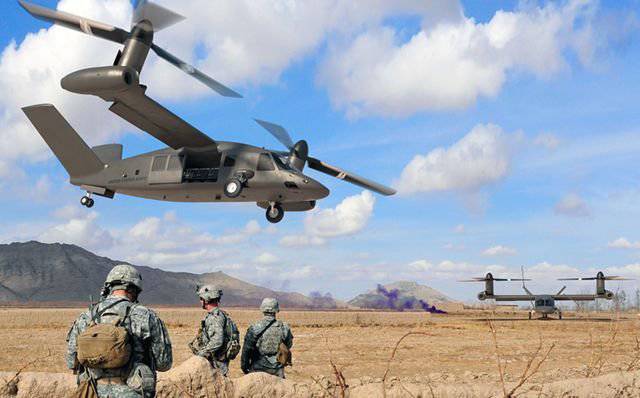 It is reported that the new convertiplane belongs to the 3 generation, but according to what specific features Bell Helicopter has divided the convertiplanes into generations, it is not specified. Now the only commercially available device of this type is the tiltrotor V-22 Osprey, most likely, this aircraft belongs to the 2 generation. In this case, it is likely that the first generation of Bell Helicopter will recognize the convertible planes XV-3 and XV-15, which were created in 1950-1970s. At the same time, the company is engaged in the creation of such machines not only for the military. The Americans, together with the Italian company AgustaWestland, are developing the AW609 convertoplane designed for the needs of the civilian market.

Unlike the convertible V-22 Osprey, whose screws were tilted with the engines, in the new American development the engines will be fixed in a horizontal position, and the transition from airplane mode to helicopter mode will be done with the help of tilting the screws alone. The convertible V-280 will receive a straight sweep wing (on the V-22, a reverse sweep wing is used). The wing will be manufactured as a single piece using the Large Cell Carbon Core technology, which reduces the weight of the entire structure and reduces production costs. In addition, this technology allows you to quickly identify defects that occur during operation of the device.

Bell V-280 fuselage will be made of composite materials. Also in the design of the aircraft provided by the electric remote control system (fly-buy-wire) with triple channel duplication and V-shaped massive tail. The use of such plumage will somewhat reduce the effective Valor scattering area, as well as stabilize the flight in aircraft mode. 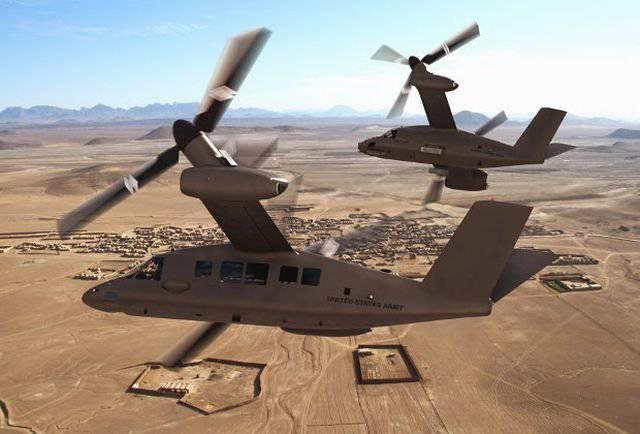 A key element of the project is to reduce costs and simplify the design compared with mass-produced V-22. The wing of the convertible V-280 will be made in the form of one large composite panel. Also, the base model V-280 will not receive a rather complicated wing folding mechanism, which is used on the marine version of the V-22.

Use on the tiltrotor V-280 rotors with engine nacelles fixed in a horizontal position, eliminates any danger during the departure of paratroopers from the car through the side doors. It also facilitates firing and increases the angle of fire from machine guns, which can be installed in the doorways, during the approach to the target or landing on the ground in case of detection of the enemy. In addition, this design reduces the technical risk, and also eliminates the need to certify the engines of the device at different angles of inclination. Bell Helicopter is confident that the airflow will be located at an intermediate level between conventional helicopters and the V-22 Osprey.

According to published data, the tiltrotor V-280 Valor will be able to develop cruising speed in 518,6 km / h, and its combat radius will be in the range 926-1481 km, ferry range will be 3,9 thousand km. For onboard embarkation and disembarkation of the crew, as well as firing, it is planned to use 2-e side doors 1,8 m wide. V-280 Valor will also receive a retractable landing gear. If we talk about deciphering the name of the car, the letter "V" indicates to us the possibility of vertical take-off and landing, and 280 is the cruising speed of the device in the nodes. The crew of the convertoplan will consist of 4-s people. 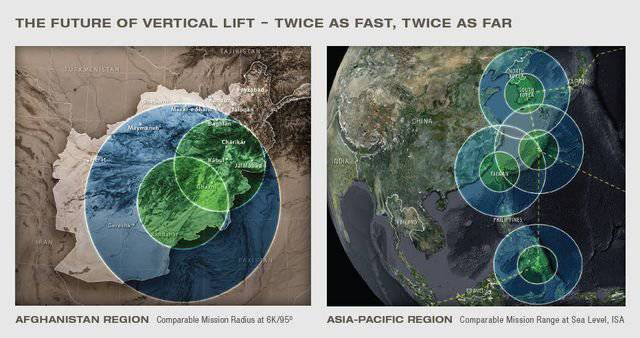 Comparison of the combat radii of the UH-60 (green) and V-280 (blue)
It is reported that Bell Helicopter is ready to present the military 2-e basic models of its new convertiplane: impact and transport. The transport version of the V-280 Valor is intended for transportation of a landing force or any cargo to 11 (the maximum carrying capacity of the vehicle is not specified). The radius of the flight zone of the transport convertoplane will be 463 km. The shock version of the convertible V-280 Valor is positioned as a possible replacement for AH-64 Apache helicopters. In the shock version of the aircraft will receive a complex of high-precision weapons in special outboard containers, and in the nose of the apparatus a special gun will be placed on a special turret.

Today Bell Helicopter, in collaboration with Boeing, is engaged in the production of V-22 Osprey converters. This machine can reach speeds of up to 556 km / h, and cruising speed is 446 km / h. The combat radius of this vehicle is 722 kilometers. The V-22 Osprey convertible is able to carry up to 32 military personnel or payloads weighing up to 9 tons. Machine guns of 7,62 and 12,7-mm caliber can be mounted on it, as well as a six-barreled 7,62-mm machine gun in a special outboard container.

It is worth noting that the new convertiplane did not secure a happy future. Until 2030, there are still 17 years left over which much can change significantly. Initially, the US military expected to receive prototypes of a promising rotary-wing machine with a new power plant back in the 2010 year. But because of the start of the global financial and economic crisis and the subsequent reduction in spending on some promising defense programs, the deadlines for their end were shifted to a later time. But even now, being engaged in optimizing the country's budget, the US government has obliged the military to annually reduce their spending (in 2013, by 2013 billion dollars) since March 46. And this can again lead to the postponement of a number of promising projects, and with an unfavorable outcome, even the cancellation of programs. 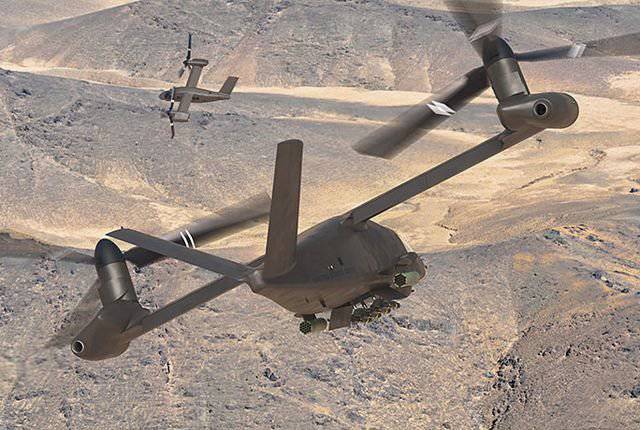