Terrorism in Syria: a danger to all 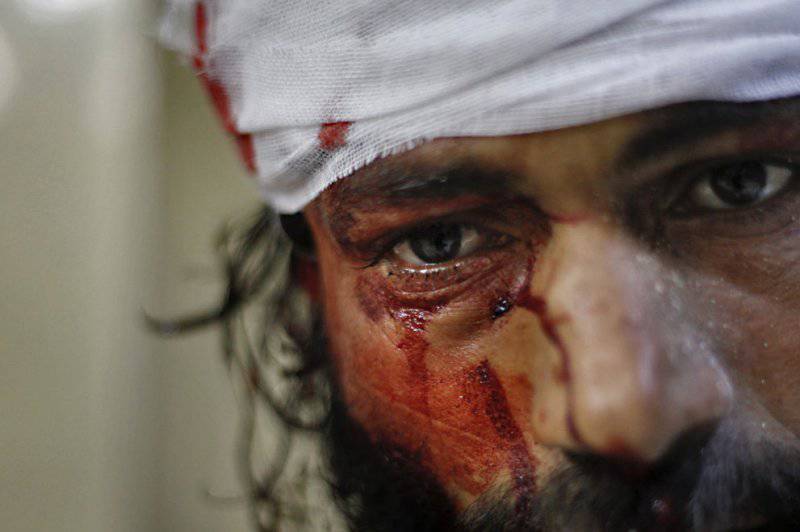 Gangsters fighting against Syria for Western and Qatari money committed an atrocious and monstrous crime.

On April 11, a helicopter was shot down over the city of Marraat en-Numan of the province of Idleb, on which servicemen delivered bread and other food to civilians who were under siege of militants.

With the help of modern portable air defense systems that are provided to the Syrian insurgents by the so-called "civilized" countries, members of terrorist groups managed to shoot down a helicopter. It contained eight soldiers and officers. When a helicopter fell, some managed to survive. But…

Terrorists rushed to the place of the helicopter crash. Finished off the survivors. Then all of them cut off their heads and grilled them. This process was videotaped and a scary video was distributed on the Internet. The bodies of the fallen were burned.

Silent, silent world advocacy. Silent world politicians. And if they open their mouths, it is only to accuse the Syrian state and the army again and again of something.

But to create such atrocities and with impunity they can boast only of those who stand behind strong support at the world level. And I want to ask the world cannibals: Well, gentlemen, the priests for democracy, do you like it?

The long-suffering city of Dzharamana in the province of Damascus, who suffered dozens of terrorist attacks and shelling, but does not want to surrender to the mercy of the bandits, again underwent a ruthless attack.

Terrorists fired three mortar shells at the bus station. One of the shells exploded in the building of the bus station, the other two landed near the bus. 4 people died, more than 20 injured - civilians, whose only fault is that on this day, April 14, it took them somewhere to go about their business. There was a lot of damage to the bus station, buses, parked cars nearby.

The question arises - say, the bandits are the noble "rebels" who fight the army and the police of the so-called "regime" (after all, the world's leading media outlets interpret the Syrian opposition). But then why bombard the bus station, kill the innocent and bruise buses? Maybe the “fighters for democracy” want people to ride donkeys, like in the Middle Ages?

Mortar shelling of militants underwent a gas station on the highway between the cities of Deraa and Damascus. 4 man was killed, including three women. All of them are members of the same family.

On the same highway was a terrorist act in the tunnel. The bandits blew up powerful explosives there. Fortunately, there were no human casualties, but there was severe damage. This is intended to block traffic between cities.

In another Syrian province, Homs, militants attacked the world-famous ruins of the ancient city of Palmyra. The security forces did not allow the vandals of the terrorist organization “Dzhebhat An-Nusra” to destroy what had survived from the oldest temple. The terrorists also tried to attack the Dedeman Hotel, which was once very popular among tourists, but they were rebuffed here too. Most attackers eliminated.

Barbarism spares neither the most ancient temples created in ancient times, nor those that were built at the beginning of the birth of Islam, nor modern buildings.

Attacked by gangsters, a journalist, an employee of the Iranian TV channel "Khabar" Mohsen Husay. He was in the Said Zeinab area, near Damascus, when a terrorist sniper opened aimed fire at him. As a result, a reporter who was injured was urgently hospitalized.

He told what he saw himself: the militants do not distinguish between where the military and civilians are. They shoot at everything that moves. Including, and by journalists.

However, Mohsen said that this attack will not stop him and will not force him to refuse to fulfill his professional duty - covering the truth about the events in Syria.

In the city of Aleppo, the film crew of the Syrian state television channel suffered. Journalists were reporting on the work of law enforcement officers when a suspicious car drove up to the police station. Militiamen knowingly paid attention to the car - there were two terrorists in it. One managed to eliminate, the other managed to blow himself up.

As a result of the explosion, several people were injured, including three correspondents of the Syrian TV channel. One of them, Shadi Helva, wounded in the head and in the hand, having regained consciousness, said that this case would not force him to retreat, and he would soon return to the performance of his duties.

In Aleppo, a member of the Syrian Arab news agency SANA Ali Ahmad died of the death of the brave. After graduating from the faculty of French at Damascus University, he worked as a translator in the French department of SANA, and all his colleagues speak of him as a very conscientious employee and good companion. However, he could not indifferently look at everything that happens in his homeland. Due to the fact that he was in responsible work, he had the opportunity to receive a reprieve from service in the Army, but he rejected this path for himself and went to the front - where it was most difficult. 9 April he fell in battle. His colleagues were in touch with him, called him. They conveyed his last words: "We write with our blood history the fight against terrorism, which receives power only from petrodollars. "

Terrorists blew up a mosque in Deraa, and blamed the army

One of the most ancient mosques in Syria was blown up - the Al-Omari mosque in the city of Deraa. Ironically, this is the very mosque where the call to unrest was first voiced.

The terrorists filmed the explosion and the collapse of the minaret of the mosque on video and distributed it, accusing the army of what happened.

In fact, the Syrian authorities, on the contrary, for two years carried out restoration work in this ancient mosque, and they had no reason to destroy it. On the other hand, the handwriting of al-Qaeda terrorists, who never stopped before the destruction of antiquities and shrines, is clearly visible.

Earlier in the same city terrorists blew up the Al-Sadiq Abu Bakr mosque using a mined car driven by a suicide bomber.

Deraa is not the only city where mosques were blown up by militants hiding behind Islam.

For example, in the city of Aleppo, the Umayyad Grand Mosque was subjected to several ruthless attacks - the most famous in the city, which in the old days attracted crowds of tourists. Now it is burnt from the inside, its southern wall is blown up, and it will not take its former appearance soon.

In Damascus, in order to kill the disliked militants of an outstanding religious figure Muhammad Said Ramadan Al-Buti, the mosque Al-Iman was blown up. Then about 40 people died.

During a recent major terrorist attack on Saba Bahrat Square, one of the oldest mosques in Damascus also suffered.

In the city of Dareia, vandal terrorists unrecognizably changed the mosque in which the ashes of the granddaughter of the Prophet Seida Sukeina were buried. It was looted and set on fire; in addition, the terrorists, retreating, tried to blow it up.

I personally had to see mosques in Homs, abused by bandits, ashes of burned religious books, blown-up minarets ... Terrorists often use mosques for their headquarters, field hospitals, warehouses weapons, and, retreating, they burn everything that is possible without thinking about religion or the need to preserve cultural heritage.

It would be worthwhile for those who go to the ranks of the Syrian “opposition” to think, guided by the slogans of sacred jihad.

Ctrl Enter
Noticed a mistake Highlight text and press. Ctrl + Enter
We are
Situational analysis of the death of the MH17 flight (Malaysian Boeing 777), made on the basis of engineering analysis from 15.08.2014Results of the week. “A terrible holiday spirit was hovering in the air.”
47 comments
Information
Dear reader, to leave comments on the publication, you must to register.