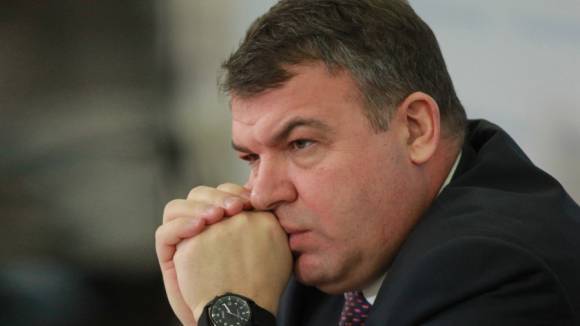 Ex-Minister of Defense Anatoly Serdyukov, his protege Yevgeny Vasilyev, not only set the deadlines for the liquidation of military enterprises, the sale of property of which led to the initiation of criminal cases, but also personally promoted their “goods” on the market. Izvestia has at its disposal an advertising campaign plan aimed at attracting potential buyers of the Defense Ministry’s property, signed by Vasilyeva and Serdyukov. According to the Accounts Chamber, only the intermediary enterprises of Voentorg illegally allocated more than 2 billion rubles to pay for advertising, although they had debts to real service providers and were bankrupt.


As a source in the Ministry of Defense told Izvestia, the protégé of former Defense Minister Yevgeny Vasilyev Serdyukov insisted on the need for a large-scale advertising campaign.

“She held the position of head of the Department of Property Relations (DIO) and, in fact, managed the entire restructuring of Oboronservis,” says a senior official in the military department. - As a result, almost 60 companies with hundreds of facilities throughout Russia from Kaliningrad to Vladivostok have not fallen into the holding's new structure.

According to the Izvestia interlocutor, the property of these companies (about 8 thousand objects) was subject to sale. However, if there was a demand for buildings in the capital, then there were difficulties on the periphery with buyers - nobody needed half-demolished buildings located at a distance from large cities.

“Therefore, in order to attract potential buyers, it was decided to conduct an aggressive and large-scale advertising campaign, in which the leading Russian mass media were to be involved,” explains the Izvestia source.

As follows from the documents signed by Evgenia Vasilyeva and approved by Anatoly Serdyukov, an exact plan of the marketing company was drawn up with the definition of advertising costs in the top Russian media. 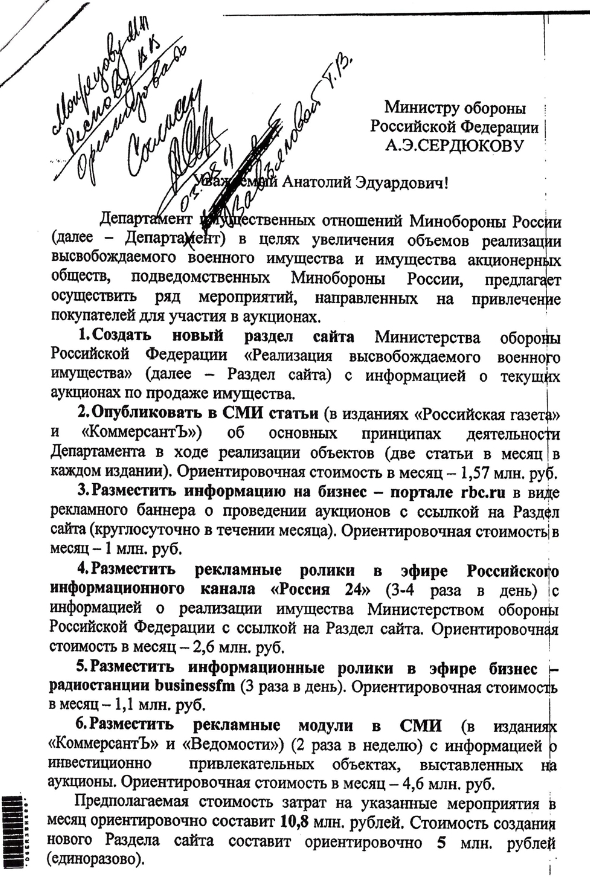 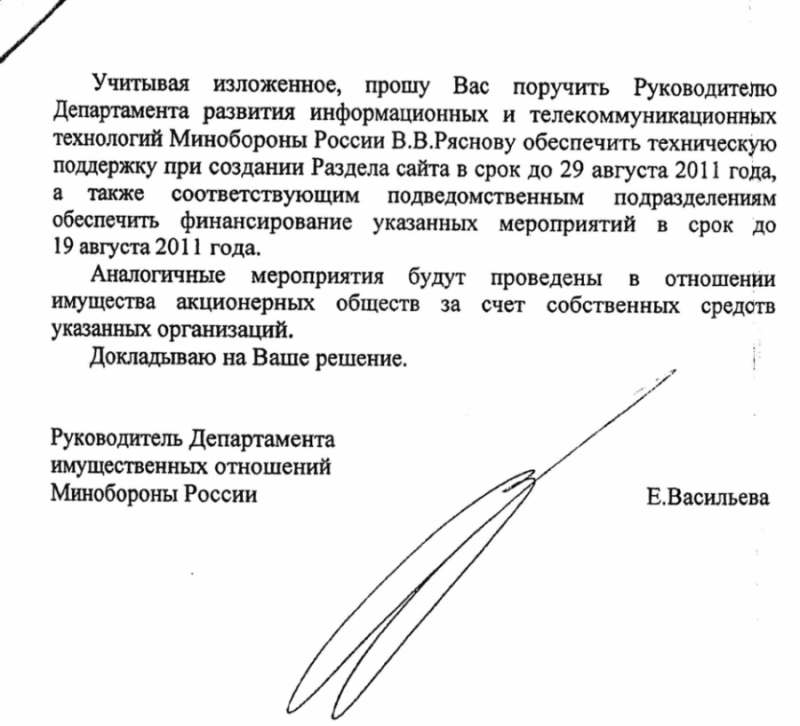 The attack on the minds of potential buyers had to be conducted in four directions at once. To begin with, 5 million rubles were planned to be allocated for the creation of a new special section on the official website of the Ministry of Defense called “Realization of the released military property”. There should have been information about all current auctions. But the main money was not sent to the site itself and to departmental publications (the newspaper “Krasnaya Zvezda” and others - “Izvestia”), but to other mass media that have a reputation for being business and have a higher rating.

So in the “Rossiyskaya Gazeta” and other editions, Vasilyeva and Serdyukov were going to post two articles per month with information “about the main principles of DIO activity”. And immediately the estimated amount of monthly expenses - 1,57 million rubles. At the same time, it was planned to place a special banner on holding auctions on the website of the Rosbusinessconsulting information agency (rbc.ru). It had to hang around the clock for a month for 1 million rubles. It was proposed to use even more funds for commercials (3 – 4 times a day) on the Russia-24 channel, for which 2,6 million rubles were allocated. Not left out and business radio. So, Vasilyeva and Serdyukov planned three times a day to advertise the sale of unnecessary military property in the wake of Business-FM. It was especially noted that in the central newspapers advertising modules about “investment attractive objects” should appear at least twice a week. And 4,6 million rubles were allocated for this.

In total, about 16 million rubles per month were sent to announcements about the sale of objects of the Ministry of Defense, for the year this amount would be 192 million rubles. Now military prosecutors and investigators deal with documents about a large-scale advertising campaign and the use of budget funds on it.

It should be noted that the Accounts Chamber (CC) has previously identified in Oboronservis the misuse of public funds for such advertising scams. In particular, it was said that 2 billion rubles were spent on the purchase of bills, the issuance of loans, as well as advertising. At the same time, nine companies that worked with Voentorg, which was part of the military holding, honestly transferred money for advertising, although they had debts to their real suppliers.

In general, according to the auditors of the joint venture, the damage from corruption crimes in the Ministry of Defense only last year reached 7,5 billion rubles.

Currently, the Investigative Committee has combined over 11 criminal cases of fraud with property into one proceeding through the Oboronservis holding. These are large objects of the Ministry of Defense’s real estate, including complexes of buildings of military institutes, land plots in the Krasnodar Territory, the buildings of the Soyuz and Voentorg hotels in Moscow, a warehouse complex in the Odintsovo district, and the Northern oil transshipment complex fleet in the Murmansk region. The total damage from transactions, according to TFR, exceeds 16 billion rubles.

Ekaterina Smetanova, ex-head of the Center for Legal Support Expert, LLC (after she made a deal with the investigation, was released on recognizance) and her husband, ex-general director of the District Air Force Depot of the Moscow District of the Air Force Maxim, were accused in this criminal case. Zakutailo (arrested). Also last week, the ex-financier of Mira LLC Irina Egorova was detained. Protege Serdyukov Eugene Vasiliev is under house arrest. Ex-Minister Anatoly Serdyukov is still a witness in this case.

Ctrl Enter
Noticed oshЫbku Highlight text and press. Ctrl + Enter
We are
The follower Vasilyeva received a more serious punishmentSit, but at home. Evgenia Vasilyeva arrested in the case of Oboronservis
72 comments
Information
Dear reader, to leave comments on the publication, you must to register.