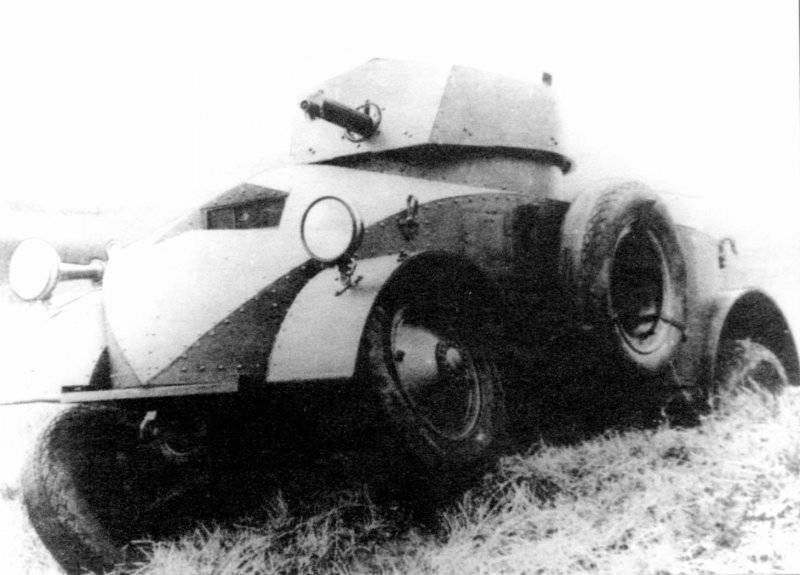 The first attempt to create an armored car of the Hungarian design was made in the 1932 year by the already mentioned designer N. Straussler. Under his leadership, the company Manfred Weiss developed and manufactured a four-wheel unarmored AC.I. car. In fact, it was a future armored car chassis. The chassis was taken to England for testing. In 1935, an improved AC.II chassis model was produced, again again soon sent to England, since it was impossible to book it in Hungary (the restraining articles of the Trianon Treaty were still in force). The armor and turret of the car was equipped by the English company Alvis, to which the designer himself switched to work in 1937. Soon Alvis-Straussler was formed. The AC.II armored car had riveted armored hull and turret. The mass of the car with a crew of four was 4 t. Armament consisted of a Vickers machine gun caliber 7,69 mm. Six-cylinder Alvis engine with horsepower 120 clocked an armored car up to a maximum speed of 45 km / h. 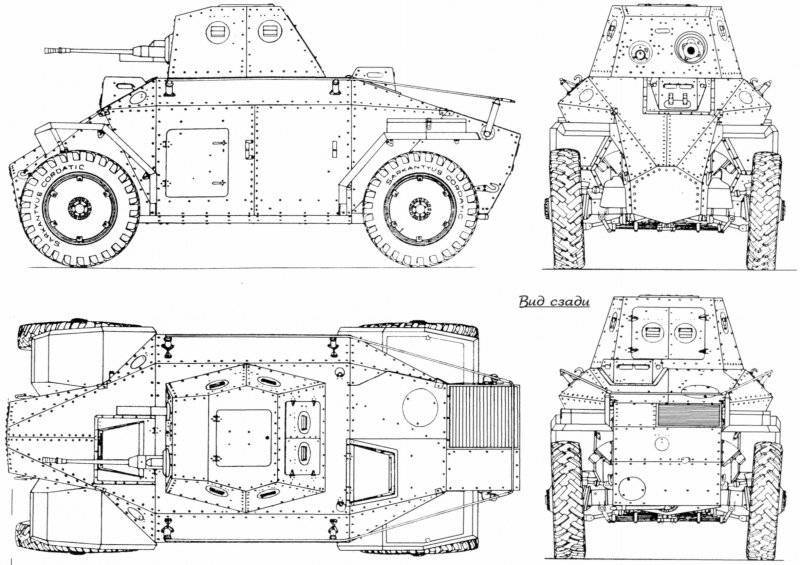 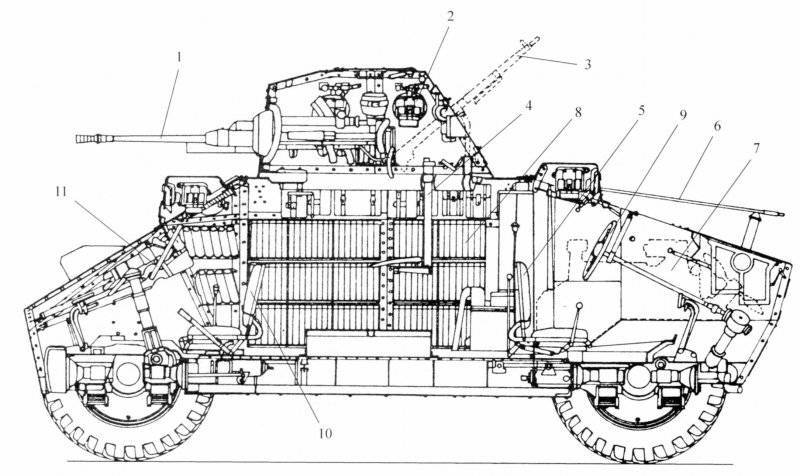 In 1937, a prototype of an AC.II armored car was manufactured at the Alvis-Straussler plant. These machines were ordered by Holland for their colonies, Portugal and England for service in the Middle East. The chassis for them were supplied by the firm Manfred Weiss, and the armor, engines, gearboxes and weapons - Alvis-Straussler.

Hungarian company Manfred Weiss in 1938 year based on the AC.IIID chassis produced a prototype armored car for Honvedsheg. The car received the AC.II index and had a body and a tower of non-armored steel. She was tested in 1939 year, was recommended for serial production and adopted for service under the name 39M Csaba ("Chabo") - in honor of the younger son of the Hunnish king Attila. Straussler had no relation to the final development of “Chabo”. The order for the production of eight training (non-armored steel) and 53 armored vehicles, the plant Manfred Weiss received in 1939 year. From 1940 to 1944, 135 units were released year.

“Chabo” is the only serial Hungarian light reconnaissance armored car. He is one of the most successful machines of this type during the Second World War. 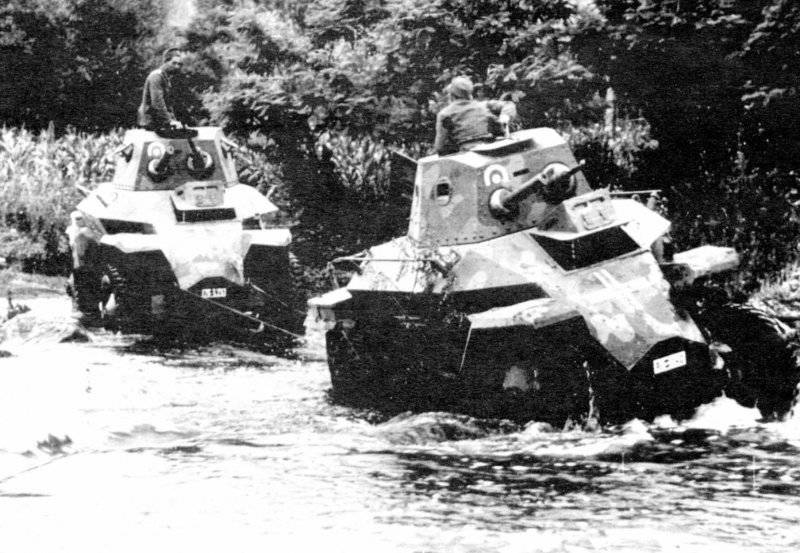 The turret and the carrying body of the car, riveted, were assembled from straight armor plates located at rational inclination angles. The thickness of the armor plates in the frontal part of the body reached 13 mm, sides - 7, towers - 10. In the stern of the right was the engine, on the left - the rear control post. The armament consisted of an 36M anti-tank rifle, caliber 20 mm and 8-mm machine gun 34 / 37AM Gebauer. In addition, the 8-mm 31M light machine gun, intended for firing at air targets through a hatch in the stern wall of the tower, was packed in the body of an armored car. Ammunition - 200 cartridges caliber 20 mm and 3000 cartridges caliber 8 mm.

The crew included the commander-gunner, machine gunner, front driver and rear driver (he is also a radio operator). The latter had a radio station R / 4.

The eight-cylinder carburetor V-shaped engine Ford G61T liquid cooling was installed on the armored car. Power - HP 90, displacement 3560 cm3. The transmission included a six-speed gearbox and transfer case. The wheel formula of the armored car is 4x2 (when reversing 4x4), the size of 10,50 tires is 20, the suspension is on transverse semi-elliptical springs (two for each bridge). 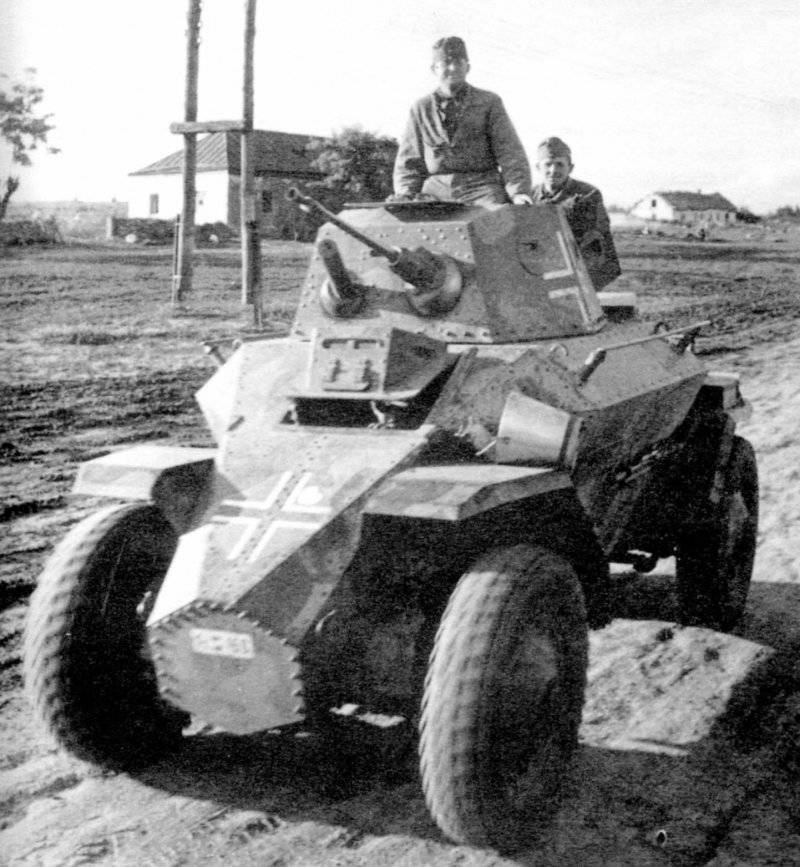 The power plant and the undercarriage provided “Chabo” with a sufficiently high mobility and maneuverability on the ground. Maximum speed when driving on the highway reached 65 km / h. Power reserve was 150 km with a capacity of fuel tanks 135 l. Combat weight of the machine - 5,95 t.

In addition to the linear modification, the commander version was also produced - 40М, armed only with 8-mm machine gun. Radio stations R / 4 and R / 5 with a frame antenna were installed on it. Combat weight was equal to 5,85 t. Commander vehicles were made 30 units.

It should be noted that for armored vehicles of the Danube flotilla Manfred Weiss produced 18 Chabo towers.

The Chabo armored vehicles entered service with the 1 and 2 motorized and 1 and 2 cavalry brigades, one company each. The company consisted of 10 combat vehicles, one commander and two training. A platoon of three "Chabo" had a mountain rifle brigade. All of these compounds, with the exception of the 1 Cavalry Brigade, together with the Wehrmacht took part in the aggression against Yugoslavia in April 1941.

In the summer of the same year, the 2-I motorized and 1-I cavalry brigades, as well as a company of 2-X armored vehicles — Chabo 57 fought on the Soviet-German front. By December, 40 armored vehicles were lost. During the fighting revealed the weakness of their weapons and booking. In January, the 1943, in battles on the Don, destroyed the 1 Cavalry Brigade and lost all the 18 such armored vehicles that were in its composition.

By the summer of 1944, 48 combat-ready Chabo remained in the Hungarian army, 14 of whom fought in Poland in June as part of the 1 Cavalry Division. The last time this type of armored vehicles took part in the battles in Hungary in the winter of 1945. All of them were destroyed by the Red Army.