Parliamentary hearings on the future of the MiG-31

April 15 2013
167
Last Thursday, a unique event took place in the State Duma. Separate parliamentary hearings organized by the Committee on Defense dealt with only one type of military equipment. The topic of the hearings looked like this: "The resumption of production of the MiG-31: reality and prospects." Despite its age, this aircraft remains the main long-range interceptor for the Russian Air Force and will retain this status for the next few years. Due to the importance of such airplanes for the country's defense capability, a separate discussion of their future prospects took place in the State Duma. 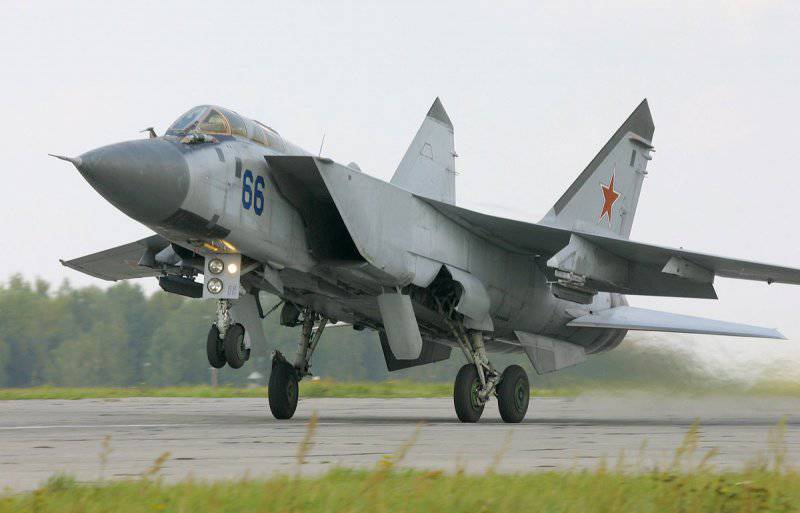 The hearings began with a speech by G. Zyuganov, the head of the Communist Party of the Russian Federation Duma faction. According to him, in recent years, the domestic aircraft industry is experiencing serious problems, primarily of a personnel nature. Therefore, in order to preserve and develop the existing industrial potential, it is necessary to take appropriate measures, for example, to strengthen government support for specialists. It is worth noting that such a move is indeed capable of significantly improving the situation in the industry, but the main question of the hearings was the further fate of the MiG-31 fighters.

The importance of this aircraft is vividly confirmed by the figures given by V. Komoyedov, Chairman of the Committee on Defense, in his speech. Of the 62 with more than a thousand kilometers of the state border of Russia, about 13,5 thousand is not executed. In addition, about a third of the country's airspace is not controlled by the air force. These factors clearly demonstrate the importance of long-range interceptors MiG-31 for the air defense of the state.

According to Komoyedov, the characteristics of these aircraft over the next ten years will exceed the capabilities of foreign aircraft. Therefore, it is urgent to solve the issue of numbers. For twenty years of serial production, Soviet and Russian aviation The industry has built more than 500 MiG-31 aircraft. As of last year, the troops were half the size. At the same time, according to Komoyedov, at least 120 aircraft are in combat readiness. This means that only 20-25% of the total number of collected interceptors can currently perform their tasks.

All the arguments cited by the Chairman of the Committee on Defense, in fact, were arguments in favor of the main thesis, emphasizing the need to resume production of MiG-31 interceptors. In this case, if the new aircraft will be built in accordance with the updated project, the estimated service life of the fighters will increase by 15 years or even more. Therefore, in the very near future it is worthwhile to consider the issue of a new start to the construction of the MiG-31.

Further, Commander-in-Chief of the Air Force Lieutenant-General V. Bondarev spoke on the subject. He agrees with the general assessment of the MiG-31 aircraft and stressed that the Air Force "is not one iota" against it. However, the construction of new interceptors, even if they have undergone modernization, according to the commander, cannot be economically advantageous.

The main reason for the opinion about the inexpediency of assembling new aircraft of the old model lies in the obsolescence of technology. MiG-31, with all its merits and advantages, is quite an old car. As noted Bondarev, the element base of the aircraft is very outdated. As an example, he cited the difference in the characteristics of the MiG-31 and the newest Su-35 and T-50 fighters. Thus, the target detection range of new aircraft is almost twice as large as that of old interceptors. In the context of comparing old and new cars, as well as their characteristics, the Air Force Commander recalled the American reconnaissance aircraft Lockheed SR-71 Blackbird. It is still the fastest production aircraft in the world, but has long been decommissioned. The reason is its general moral and technical obsolescence, which completely eliminates all the advantages of speed.

A clear sign of obsolescence of the MiG-31 aircraft is problems with the cockpit lantern. Lieutenant General Bondarev confirmed the information circulating in the aviation circles about the destruction of the glazing during flights at high speeds. In connection with this problem, the front-line MiG-31 can no longer accelerate to the maximum possible 2900-3000 kilometers per hour. Pilots are advised to fly no faster than 1500-1600 km / h, since the glazing of the airplane's lanterns heats unevenly and can crack and then collapse. It is difficult to talk about this with certainty, but there is every reason to assume that the interceptors of the air force are not without other problems associated with the age of technology.

Currently, the Air Force intends to modernize the MiG-31 as it is. First of all, the aircraft electronics will undergo significant processing. For this, noted Bondarev, additional design work is required, but they will obviously be simpler than the resumption of aircraft production. According to the commander in chief, about 15 billion rubles will be needed to resolve the issue with the engines and about 10 for the actual resumption of the manufacture of interceptors.

This money, according to Bondarev, will be more profitable to invest in the creation of a new long-range interceptor. Development, testing and refinement will take several years, but in the end, the Russian Air Force will receive a completely new aircraft, the combat potential of which will be significantly higher than that of the latest modifications of the MiG-31. It is extremely interesting that the creation of a new interceptor has already begun. Bondarev said that the Air Force some time ago initiated the development of such an aircraft, and it will appear by 2020 year. Approximately before 2028, the air force intends to replace the entire fleet of obsolete MiG-31 with a new interceptor.

A member of the Military-Industrial Commission under the Government M. Kashtan agreed with the Commander-in-Chief of the Air Force. He also does not see the point in the production of new aircraft and agrees with the need to develop a new interceptor. However, M. Kashtan noted that in the near future it is necessary to restore the existing fleet of aircraft. In this case, before entering the troops of the new aircraft, the airspace of the country will be protected by about three hundred modernized MiG-31 interceptors.

The result of the hearings was several recommendations issued to various departments. So, the Government of Russia was charged with forming a special commission from employees of various ministries, and also recommended including a relevant paragraph in the current State rearmament program regarding the future of the MiG-31 aircraft. The Military-Industrial Commission was tasked to determine the conditions necessary for the resumption of production of the MiG-31, as well as for the implementation of the modernization program for existing aircraft. Perhaps the most important task was the Ministry of Defense. It will have to determine the prospects of the MiG-31, calculate the required number of aircraft, as well as maintain the current state of the existing interceptors. Finally, the Ministry of Industry and Trade was instructed to stop the disposal of aircraft and the elimination of the remnants of the production infrastructure.

As we see, the parliamentary hearings ended with the most common words, which, however, is not surprising. At present, the program for upgrading MiG-31 interceptors with electronics upgrading, repair of structures, etc. is already being implemented. In the course of such modernization, the aircraft receive the MiG-31BM index. The current program, in contrast to the one that will start in accordance with the requirements of the parliamentary hearings, has a completely understandable look and prospects. The MiG-31BM project appeared more than ten years ago and therefore has long been without questions.

The details of a certain modernization, which may begin soon, have not yet been made public for obvious reasons. Moreover, judging by the date of decision-making, there is not even a common plan and appearance of the updated aircraft. For this reason, now all or almost all statements about the modernization of fighters will be in the nature of assumptions, but no more. Consequently, we can assume any course of events. In this case, the most likely method for upgrading interceptors is to expand the plans of the previous program. In other words, not only a few dozen MiG-31s, but also a number of other aircraft of the same model will now be renovated and updated. 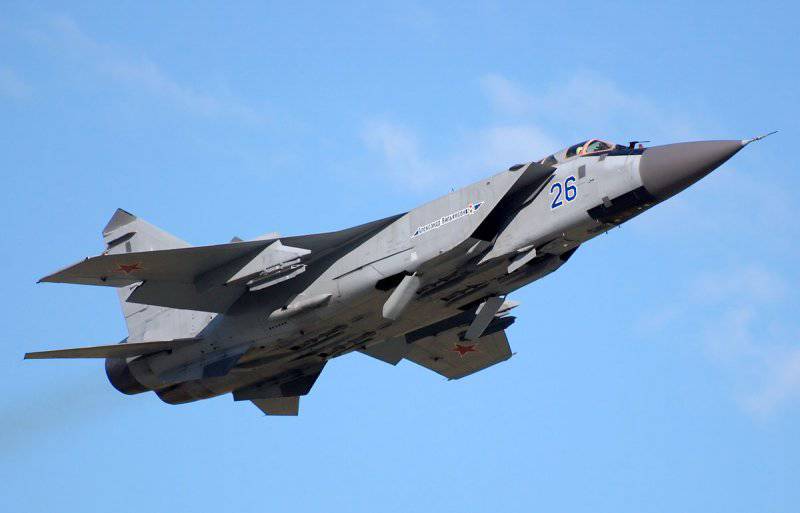 The advantages of this method of updating the MiG-31 parks are obvious. Production of the necessary components is adjusted, the characteristics of the upgraded aircraft suit the customer, and the production process is launched. The air force has already received a number of updated machines. From the end of 2011, the plans of the Ministry of Defense regularly mention that 60 interceptors will be upgraded. The rest were to remain in the same condition as they are now. Now, probably, all other MiG-31 aircraft, too, will eventually go to aircraft factories to replace equipment and repair other systems.

It should be noted that not only airplanes are needed for effective air defense of the country. It is also desirable to update a number of other systems directly related to interceptors. As an example, take weapons. the main thing weapon MiG-31 interceptors of all modifications - long-range air-to-air missile P-33. It is capable of hitting targets at a distance of 150-160 kilometers. However, this rocket was put into service in the early eighties and therefore can no longer be called fully modern. Other missiles, such as the new KS-172, may come to replace it in the coming years. The designers of NPO Novator intend to provide her with a range of 400 kilometers. Obviously, achieving such characteristics is a very difficult task and, unfortunately, over the next few years, MiG-31 fighters will not receive a new missile.

In addition to special long-range missiles, interceptors also need some ground-based weapons. Thus, the MiG-31 was originally created as one of the elements of the complex and had to go to the interception area, using data from ground-based radar. Further actions the aircraft produces independently, if necessary, using information from air defense radars or early warning aircraft. Thus, for efficient work of MiG-31 interceptors, including modernized ones, it is required to restore the lost ground infrastructure where it was, and also to create a new one in areas where it was previously absent.

As a result, news about the MiG-31 interceptor at the same time look both positive and ambiguous. On the one hand, these aircraft really need to be upgraded to maintain their characteristics and combat potential. On the other hand, past years without due attention had a detrimental effect on the condition of the aircraft themselves and the necessary infrastructure. Thus, all the necessary work may ultimately entail a large investment of time and money. In this case, I would like the modernization of the aircraft and infrastructure to end before the Air Force begins to receive a new interceptor.

For assistance in writing this article, the author thanks the user vaf