Leonid Ivashov: “I don’t think that North Korea is madmen who will strike first” 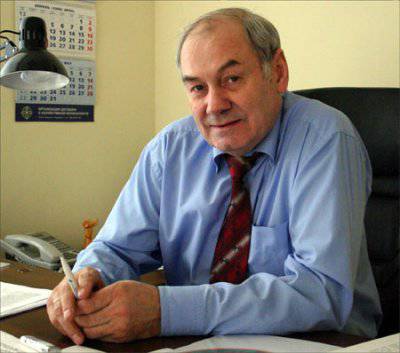 
Now we are witnessing a clash on the Korean Peninsula within the framework of the information war and nothing more. There will be no nuclear war, especially with missile launches, and there can be no. There are interested parties in this conflict, but neither side benefits a big war, especially a missile war: neither South Korea, nor the DPRK, nor the United States, nor Japan. There are no parties interested in the war, which means that the chances of stopping the conflict are quite large.

In this informational, propaganda war, the DPRK relies on its entire arsenal

But in this informational, psychological war there are grant winners. The Americans unwound this situation by conducting powerful exercises with the South Korean troops: flying nuclear bombers along the border, offensive operations, the object of which was, naturally, North Korea.

For what purpose? First, new young leaders came: a nice woman in South Korea became president, and comrade Kim Jong-un received the legacy of the position of head of North Korea. It is clear that they are under the influence of military experts, so the Americans took into account this circumstance and the fact that the new leaders (especially the North Korean leader) should show the military and their people readiness to defend the independence and security of the country just as and his father, and his grandfather.

The army of North Korea is larger than the Russian, in number and even in the number of weapons. True, they have it is not quite new, but still it is a formidable force. Naturally, they will not use it, but they are forced to show readiness to use to contain the war. The DPRK relies on its entire arsenal in this informational, propaganda war, including nuclear devices (they have no warheads, according to American data), and on those missiles they successfully develop and test - short, medium and intercontinental (although they do not have the latest rocket). Naturally, South Korea responds with the same rhetoric.

What dividends have the Americans and the Japanese received today? For example, they are trying to wipe our nose: “You see, you are against our American missile defense, but the real threat has arisen.” The Obama administration explains the same to its population and even helps intimidate it so that they do not interfere with military spending.

Great won on the Korean issue Japan. After all, according to the constitution, it was forbidden to have its own armed forces, the Ministry of Defense, the general staff, and so on. And now Japan, in fact, has left the constitutional framework and has the most powerful group of armed forces, creates its own rockets, and no one condemns them. Before the Fukushima events, they were working on a nuclear warhead. Therefore, now the position of Japanese militarism is strengthening.

The Americans also tested the behavior of the new Chinese leadership with their military exercises; They probably also thought about how the new Putin would lead himself in this situation ... That is, this is a complex geopolitical operation. But Americans are not interested in a big war either, but they are also trying to push the North Koreans and South Koreans into internecine conflict, as they do in the Middle East, North Africa, in the Latin American continent - this will be a great success.

Today, it seems to me, it is necessary to translate this rhetoric into the mainstream of political and diplomatic negotiations, consultations and deduce the situation. Otherwise, God forbid, some random incident on the 38th parallel, where the line of confrontation is located, and further the escalation of the war can move spontaneously. Indeed, 40 kilometers from this zone is the capital of South Korea. If they strike, the answer will be: on the side of South Korea with aviation the group will be the Americans. This is not desirable for Korea, nor for Russia, nor for China. It is necessary to restrain the situation.

The main question here is: the southerners have a guarantor of their security - this is the United States, and North Korea does not. It is necessary to think that the Shanghai Cooperation Organization (it needs to be raised) would define such a security guarantee for Pyongyang.

I do not think that North Korea is the madmen who will strike first, especially with missiles, it is impossible to joke. They do not have the potential to threaten and oppose America, so this will be self-destruction.

However, the media often issue stamps, depicting North Korea as a cave dinosaur. Even serious journalists and political scientists talk about it. But you will not become a rocket power in a cave, and 20 cannot stand for years in an embargo. Now, if Russia is now put in the North Korean conditions, then we will begin to die out in two weeks. And they keep and develop.