Not number, but quality 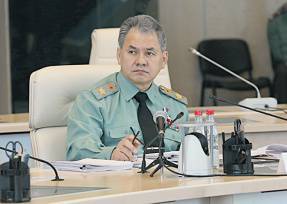 The Minister of Defense of the Russian Federation, Army General Sergei Shoigu, again drew attention to the need for a systematic increase in the number of contract servicemen. This was stated at the next meeting of the leadership of the Armed Forces, held last Monday at the Situation Center of the RF Armed Forces. According to the minister, by the end of this year in the army and on navy There must be at least 240 thousand contractors.

“Thus, in the year of 2013, taking into account the dismissal of personnel, it is necessary to select and employ more than 60 thousand people under contract for military service ... A large-scale task requiring significant efforts from managers at all levels,” Shoigu said. He reminded his subordinates that the presidential decree of 7 of May of last year “On the further improvement of military service in the Russian Federation” has been tasked to increase the number of contract servicemen by at least 50 thousand annually for five years. For its implementation in 2012, a new system of recruitment of this category of military personnel was created, quantitative indicators and priorities in recruiting military posts were determined.

In the development of the theme at the meeting, Deputy Minister of Defense - State Secretary Nikolai Pankov made a report. According to him, in general, the number of soldiers and sergeants employed in contractual service should be 425 thousand people by the beginning of 2017 of the year. And by January 1, the 2013, of which there were only 186 thousand of such servicemen. Many independent experts noted earlier that such a goal, stated even under the former Minister of Defense Anatoly Serdyukov, initially looked too ambitious and difficult to achieve. However, Sergei Shoigu, as they say, also signed the obligation to achieve the intended goal. And now Nikolai Pankov reported that the recruitment of contract servicemen is even ahead of schedule.

And yet Pankov, citing pleasant quantitative indicators, himself proposed to place particular emphasis on qualitative indicators. The ministry tried to spell out very clearly the requirements that are set when recruiting for candidates for military service under the contract and for contract servicemen already serving in all its stages. Identified high enough requirements. And if at least one of them contracted ceases to comply, he is subject to dismissal.

“The results of the eight-month work on the recruitment of contractors show very, very good qualities taken to the service,” said Nikolai Pankov. - Among the newly recruited during this period, we have not a single emergency incident, not a single violation of military discipline, and finally, not a single report on dismissal. This means that today highly motivated young people come to the contract. ”

During the discussion of the problem, the Minister of Defense separately drew attention to such a category of contract servicemen as warrant officers and warrant officers. Everyone remembers that the former head of the department Serdyukov tried to eliminate them as a class. However, Shoigu decided to restore the category. Already demanded this week to prepare a directive with a list of established posts for ensigns and warrant officers, stressing that these should be technical posts only. “There are no warehouses, no bases - only for those places where we really need specialists for servicing sophisticated equipment and sophisticated weapons systems,” said Sergey Shoigu.

Ctrl Enter
Noticed a mistake Highlight text and press. Ctrl + Enter
We are
Military reform as an integral part of the security concept of the Russian Federation: Systematic dynamic assessment
54 comments
Information
Dear reader, to leave comments on the publication, you must to register.