It is finished! The United States protected our rights ... 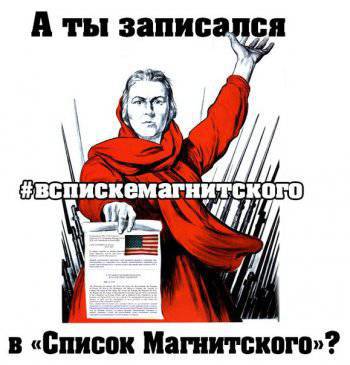 It is finished ... What the American defenders of world humanism and their Russian apprentices for a long time frightened Russia, has happened. The general public has finally gained access to such a document as the “Magnitsky list”, announced as a list of persons before whom the doors of the most democratic and humane state in the world are closed. In the final version of the list (in the part that concerns common use), 18 people are designated who, for what reason, violated human rights in Russia, drank blood from innocent people and generally allowed themselves to do this, from which unshakable adherents of the American version of democracy have literally everything inside so gurgling.


Who was in this "public" version of the list? Why "public"? - Yes, because there is information that besides it, our American "friends" have a secret part at their disposal, the announcement of which may allegedly inflict an irreversible blow to the security of the country ...

So, the "Magnitsky list" is in front of you:

Andrei Pechegin, Head of the Department for Supervision of Investigation of Criminal Cases at the Investigation Committee of the Russian Federation;

the former head of the tax inspectorate №28 Olga Stepanova,

Kuznetsov's subordinate Alexey Droganov (one of the organizers of the searches in the Hermitage Capital),

Kuznetsov's subordinate Dmitry Tolchinsky (one of the organizers of the searches in the Hermitage Capital),

Deputy head of the UK under the Ministry of Internal Affairs Oleg Logunov,

the defendant in the case of the murder of the security guard Ramzan Kadyrov, who (the guard) made accusations against Kadyrov - Lecha Bogatirov (Bogatyrev).

These people (according to the letter of the law adopted in the USA) will not be able to enter the territory of the United States, and their accounts in American banks (if any) will be frozen.

Senator Benjamin Cardin, one of the main ideological inspirers of the struggle for the rights of individual people, managed to speak out about the list adopted recently in the US (in the US, Magnitsky’s list is often referred to as Cardin’s list, as the authorities cannot explain to ordinary Americans who why in the United States precisely this surname provoked an urgent need to recall human rights in Russia, forgetting about the rights of ordinary Americans themselves).

Mr. Cardin called the adoption of the Magnitsky list historical and (important) only the first step. Well, with the historical - understandable. Indeed, the creation of a list of banned persons and the freezing of certain hypothetical accounts in American banks based on the excessive suspiciousness of individual citizens will go down in the history of world jurisprudence. But the words about the “first” step are interesting. Apparently, Senator Cardin is again loading his worn-out powder flasks with gunpowder in order to inflict another democratic blow on “dense” and “anti-legal” Russia. Well, it’s necessary for the senator to somehow work out the money of American taxpayers ... Although why are we so sure that Cardin will deliver his next “sizzling” blow to Russia? Perhaps, in his office, the walls are pasted over with other versions of the lists à la Magnitsky - for Belarus, Ukraine, Kazakhstan, for example. And there’s Iran, Syria, China, Cuba — and Senator Cardin’s work — there’s no end ... Just have time to read foreign opposition publications, meet with representatives of US-funded foreign NGOs and cook up your “hot” lists.

Such a person as William Browder was very enthusiastic about accepting the Magnitsky list in the USA. Still the Browder was not inspired by this circumstance! After all, it was Browder who once implemented the criminal tax evasion scheme in Russia, using his “wonderful” fund of Kalmyk invalids to cover up the work. After identifying this scheme, Browder’s business in Russia was declared illegal, and he himself was banned from entering the country. Browder was unable to forgive the Russian authorities that they had deprived him of the opportunity to conduct his dirty business, after which the story of Magnitsky’s death, which (death), by the way, was more beneficial for Browder himself, and began to be exaggerated with violent energy. Now Browder is happy that he has revenged on Russia he has plundered. At the same time, Browder expresses some dissatisfaction with the fact that the list turned out to be shorter than the one he was counting on. Here is a quote from Mr. Browder:

The question is, since when did “friend Bill” (Browder) become so concerned about the observance of human rights in the Russian Federation? Not long since, when he began to arrange one-day companies for helpless people with disabilities in Elista, paying those “luxurious” fees for entire 500 rubles ...

In an interview with the Russia Today TV channel, Russian Foreign Minister Sergey Lavrov bluntly stated that it was Mr. Browder who had lobbied Magnitsky’s act in the United States. Lavrov called the list adopted in the United States a tool that replaced the “anti-Soviet baton,” which for a long time was the Jackson-Vanik amendment.
Quote Sergei Lavrov:

After it became obvious, members of Congress decided to somehow compensate for the anti-Soviet (and now anti-Russian) “bludgeon” and came up with the “law of the name of Sergei Magnitsky”. This law was most actively lobbied on Capitol Hill by William Browder, and then it rushed through all the countries of Europe and offered to adopt “anti-magnetic laws” in European parliaments.

Ctrl Enter
Noticed a mistake Highlight text and press. Ctrl + Enter
We are
Dima Yakovlev's list versus Sergei Magnitsky's list: spit on a stone?The adoption of the "Magnitsky list" will entail retaliatory measures.
146 comments
Information
Dear reader, to leave comments on the publication, you must to register.