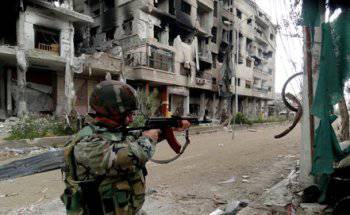 A special operation began in the border with Lebanon near the town of Ersal, which is carried out by elite units of the Syrian army, helicopters, armored vehicles and rocket-artillery batteries take part in it, according to Arab media.


A strong cannonade comes to the northeastern regions of the Bekaa Valley and the mountain resort of Zabadani, located in 45 km from the Syrian capital.
According to the Al-Mayadin television channel, violent clashes are taking place in Arjuna - the main stronghold of the rebels, where army units from the liberated city of Al-Qusayr (south-west of Homs) are advancing.

Naharnet agency reports that they are fighting on the side of the Syrian army fighters of the Popular Front for the Liberation of Palestine. From their bases, located in the border area, they are firing at gangs retreating to the border with Lebanon, ITAR-TASS reports.

On Tuesday, the leader of the Iraqi wing of al-Qaida recognized the link with the opposition of Syria. He said that his organization in Syria is fighting for an Islamic state, and that both groups, in fact, will unite, forming the "Islamic State in Iraq and the Levant."

Prior to this, the head of the German Federal Intelligence Service Gerhard Schindler said that the number of armed militants of the Al Qaeda terrorist organization in the ranks of the Syrian opposition is growing.

According to him, we are talking about thousands of fighters of the terrorist group who oppose the regime of Bashar al-Assad.

In addition, it became known that more than 300 Saudi mercenaries from among the militants of the al-Qaida underground cells who fought on the side of the rebels in Syria are already in prisons, more than 500 are at large.

Earlier it was reported that the conflict between the forces of the armed opposition and government forces in Syria has not stopped since March 2011. 70 thousands of people became victims of violence in the Arab Republic.

Syrian authorities say they are faced with the resistance of well-armed militants, who are supported from outside.

According to the UN, the number of Syrian refugees in neighboring countries has reached 1,3 million people, and since January 2013, every week, about 40 thousand people cross the border of the RAA.

Ctrl Enter
Noticed a mistake Highlight text and press. Ctrl + Enter
We are
"Army games". Masters ABT. Part of 1British tanks are coming
3 comments
Information
Dear reader, to leave comments on the publication, you must to register.