Gagarin looks at Roscosmos ... Problems and plans of the Federal Space Agency

April 15 2013
42
12 April we celebrated the 52-th anniversary of the first manned space flight. This date itself - 12 April 1961 of the year - became a kind of milestone, which allowed the world to announce the unprecedented achievements of domestic science. Just a few years after the glorious flight of Yuri Gagarin, the Soviet Union was marked by new space achievements - the first flight of a female cosmonaut (Valentina Tereshkova 16 June 1963), the first spacewalk (Alexei Leonov 18 March 1965), the creation and launch of the first in the world planetary rover (Lunokhod-1 1970 year), the launch of the first space station (Salyut 1971 year). And also - launches of satellites, interplanetary unmanned spacecraft, development of systems for the exploration of outer space and much more. This gave an unambiguous reason to call the Soviet Union the main space power on the planet. 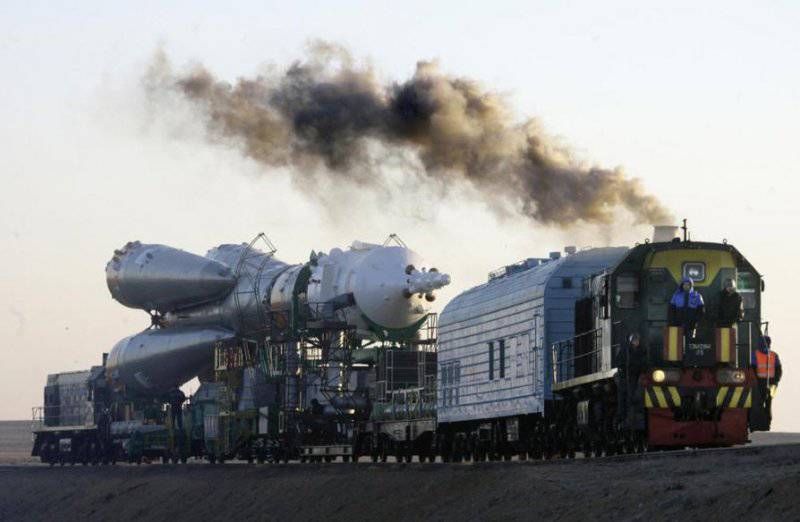 Since the time of the Gagarinsky start, years have passed, and, unfortunately, she managed to leave history not only that country, the citizen who was the first cosmonaut, but also the era of stunning domestic space achievements. Increasingly, information about space exploration is associated either with the activities of the American Aerospace Agency, or with European developments. Almost nothing has been heard about Russian space successes in recent years, but often there is information about another failed launch of a spacecraft or the collapse of a space project by the Russian side.

So what happened? Perhaps problems with technical specialists, perhaps, the underfunding of the space industry in Russia, or one overlaps another and ultimately leads to some destructive paradigm that, they say, do we really need this space? Well, and, perhaps, with the development of the space industry in the country, everything is wonderful, only for some unknown reason, all the achievements remain outside the attention of the Russian media? Let us try to sort out the situation and, if possible, identify the problems that are now painfully affecting the Russian space program.

Not so long ago, I had to hear a rather interesting phrase expressed by a person, let's say, the younger generation. This person, answering the question about what he personally knows about the achievements of modern Russian cosmonautics, said that he did not understand at all why billions of rubles are spent on this sphere in Russia, because the state that wants to world domination, and we, they say, are building a free country, which doesn’t have “world domination” in plans ... It’s an interesting idea, isn’t it ... But the same young man did not find the answer to the question: -technologies n can communicate easily on a mobile phone or a route of travel from a browser? .. World domination, uh ...

It is worth moving to the staffing of the industry. And here problems are really indicated, which in the Soviet years in this regard could not exist simply by definition. The fact is that today the enterprises that are engaged in the production of space technology and the implementation of technical projects related to space, most of them are specialists whose age is either close to retirement, or has managed to pass this psychological pension bar. Young graduates-specialists (and there are quite a few of them, judging by the monitoring of issues of various technical universities of the Russian Federation), reluctantly come to the designated enterprises. The reason is not only the relatively low wages, but also the uncertainties in obtaining housing. If during the Soviet years, the work itself at an enterprise that was engaged in the production of space technology was considered mega-prestigious, then today, in the era of calculating all human benefits only in monetary terms, not every technical university graduate (even with a baggage of solid knowledge and great potential) will go to a manufacturing enterprise for a salary in 10-12 thousand rubles, if in the usual metropolitan office he can, by playing Klondike solitaire, earn three times the amount. Moreover, the older generation of specialists is extremely reluctant to go on a kind of patronage over those representatives of young people who arrive at production associations. The motivation is about the following: for the wages that I get, I also have to learn how to use milk suckers? .. It is obvious that the money motive also plays a role here.

That is why recently it is often said about the need to urgently increase the level of remuneration of specialists in the space industry, as well as to increase the prestige of the work itself. However, it is often in our country that the phrase “an increase in the level of remuneration of labor” is somehow associated with the phrase “optimization of the industry”. And so what is optimization, many people know firsthand: to fire 500 people, so that the remaining 100 receive a “decent” salary. The optimization option is undoubtedly economical for the state budget, but with an acute shortage of qualified specialists (from ordinary welders to design engineers), any optimization can lead to the most negative consequences.

It is obvious that the authorities of the country understand the existence of serious problems in the space industry that need to be urgently addressed. However, the designated solutions to such problems often look quite dubious. In particular, at the last meeting on the country's space industry in the Amur region of Blagoveshchensk, President Vladimir Putin suggested thinking about creating a space ministry in the Russian government.

How much can the branch ministry solve industry problems? - big question. And even if all the troubles in this or that sphere would come to naught after the creation of special ministries, then all the ways to tackle sensitive issues would have been known in advance. Low milk yields - to create a ministry for milk yields, our biathletes do not shoot well - to launch a biathlon ministry ...

At the same meeting, the head of Roscosmos, Vladimir Popovkin, made a proposal for improving the efficiency of the industry. While the agency he heads has not received ministerial status, Popovkin proposes that the country's leadership and legislators should not sit idly by, but immediately equate the salaries of the agency’s employees to the ministerial and, in addition, add another 50% to those civil servants who are somehow connected with the space industry.
Vladimir Popovkin argues that the officials who oversee the enterprises of the space sector, receive two times less than the average staff of these enterprises. Like, where is this good: no one in the "space" officials after this will not want to ...

Well, what can I say: in fact, the head of Roskosmos opened everyone’s eyes to exactly where the weak points of the Russian cosmonautics appear. It turns out that the main problem is the low level of payment for officials of the agency itself ... In order to finally convince the representatives of the government present at the meeting of the need to urgently increase the salaries of Roscosmos employees, Vladimir Popovkin said:

“The last cuts we were made to do this year are 191 people. By the standards of the Ministry of Labor, we calculated that the criteria should be an 700 person. ”

If you analyze these words, it turns out that Mr. Popovkin himself and 190 of his associates in Roscosmos work for at least four ... It's amazing how with such intensity of work after a tiring workday Vladimir Alexandrovich had enough strength to get to Blagoveshchensk and express his thoughts out loud? .. How did he not fall at all from exhaustion? ..

Leaving aside cosmic problems, the causes of which, thanks to Vladimir Popovkin, we found out, we should touch on those projects that Roskosmos is working on today or is going to work in the near future.

The main project implemented on budgetary funds is the construction of the Vostochny cosmodrome. President Putin said that the first launches from this cosmodrome should take place already in 2015, and by 2020, the Vostochny cosmodrome should begin full-fledged work. At the same time, it was stated that a modern space camp should grow by 30-40 thousands of inhabitants near the cosmodrome. The head of state even made a proposal for the name of this town. In his opinion, the city should have a name associated with the name Tsiolkovsky. It is planned that the Vostochny space center will become an international platform for space launches and become one of the innovation centers of Russia. The proposal with the name of the town in honor of Tsiolkovsky looks very sensible, but at the same time the phrase “innovation center” is alarming. After another “innovation center”, Skolkovo is alarming ...

Roscosmos announces the launch of a project to build an absolutely new spacecraft ready for interplanetary flights. It is planned that the ship will move in outer space based on the use of energy of a compact nuclear power plant up to 1 MW. Vladimir Popovkin, outlining the likely technical characteristics of the new spacecraft, said that his first flight would take place already in 5 years. It should be noted that the working design of the device has not yet begun ...

The head of Roscosmos announced that in the 2015-2016 year, the Russian lunar apparatus would have to reach the surface of the moon in its polar region and carry out the sampling of the lunar soil. In this case, the soil will not be taken from the surface of the natural satellite of the Earth, but from a depth of at least 2-meters. True, while in Roskosmos they do not explain for what purposes the “new” lunar soil was needed, the “old” samples of which for the last 40 over the years have been delivered about half a ton to Earth (and by Soviet unmanned stations from different depths).

Roscosmos plans are not exhausted. The same Vladimir Popovkin expressed confidence that approximately in 2028 a super-heavy rocket will be created in the depths of the agency, thanks to which flights to the Moon will become as common as going to a country cottage.

Roscosmos plans to equip the asteroid Apophis with a beacon as part of the deployment of a new program to protect against space threats. According to Vladimir Popovkin, the lighthouse will accurately calculate the asteroid's orbit, which can be used to obtain information about the approach of a space body at a dangerous distance to the Earth.

In general, the plans, you have to admit, are huge, and they look impressive; the main thing is that all of them should not remain solely in the thoughts of the head of Roscosmos, but should be embodied, moreover, with an eye to the real need, and not just for a tick in the plans. And I would also like to hope that all these plans are not the fruits of the sick imagination of the "space" officials from their "total underfunding" and their immense processing in the depths of the agency ...

Ctrl Enter
Noticed oshЫbku Highlight text and press. Ctrl + Enter
We are
Russia’s own orbital station will not acquire in the near futureROSKOSMOS: to find life on Jupiter
42 comments
Information
Dear reader, to leave comments on the publication, you must to register.