April 12 2013
13
In recent years, the growth of competition in the field of naval equipment (TDC) can be fixed on the world market. The volume of this market is quite large. At the same time, customers are paying increasing attention to questions of military-technical cooperation in this area: the possibility of licensed production or joint assembly of warships. Also, attention is paid to modern technologies, such as Stealth. Despite the fact that objective data for the evaluation of this technology is currently not available, it is an indicator of the ship's novelty and, of course, attracts customers.


Market volume and place of Russia

Between 2004 and 2013, the year in the world sold at least 204 warships for a total of 40,17 billion dollars. Of this amount, the market volume of new ships is estimated at 130 units when they cost 38,53 billion dollars, which is immediately 63,7% of the total number of surface ships sold and 95,9% of the total global supply. Thus, the share of "second-hand" accounts for 36,3% of sold ships, and only 4,1% by value. The relevant data are presented in the analytical report of ARMS-TASS, which was published in the magazine “Arms Markets”.

According to the ARMS-TASS version, the places on the world market for sales of modern surface ships are distributed as follows:

3 is ranked UK, which implemented over the same period 15 surface ships for a total of almost 3 billion dollars.

4 belongs to the Netherlands; this country has sold 14 surface ships for a total of 3,6 billion dollars over a decade.

5 place belongs to Russia, which comes with a minimal margin from the leaders. Over the decade, the country has sold 13 surface ships for a total of almost 8 billion dollars. At the same time, for the first five years of 2004-2008 years, the entire 3 ship was sold - 1,7 billion dollars, but in the second 2008-2013, sales increased significantly - 10 ships worth 6,2 billion. 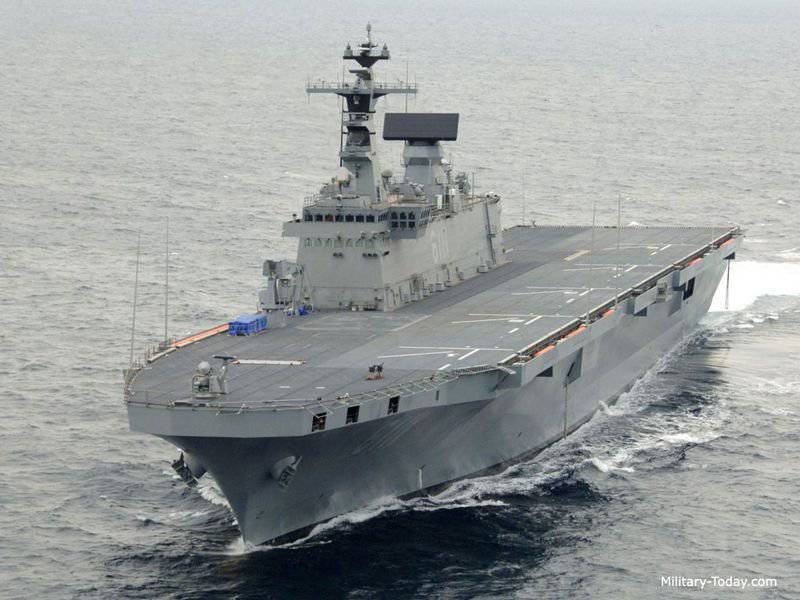 UDC "Mistal"
Market volume of weapons systems for surface ships
Essential to the market for surface ships is the market for weapons systems for them. According to the study “Forecast of the Surface Weapons Systems Market”, which was published by Forcast International, before 2018, 13 360 systems of this type will be sold worldwide, with an estimated cost of $ 8,911 billion.

At the same time, the market for weapons systems for warships in the next five years will be sustainable. The main buyers of new weapons will remain the United States. At the same time, over the years, the countries of Europe will have a significant impact on the naval weapons market. It is mainly about the large Franco-Italian program FREMM. This program provides for the delivery of 27 frigates to customers immediately. This project is the largest non-American construction program of surface ships, which will be implemented for a long period and can have a significant impact on the arms market. First of all, it will increase the share of sales of European weapons systems.

It is also necessary to note a very important trend in the market of weapons systems of warships, which is the widespread equipping of new ships with vertical launch complexes. In Russia, it is primarily new SAM "Shtil-1", as well as anti-ship systems "Caliber". The use of such systems allows ships even with a relatively small displacement to have high combat capabilities. This may indicate that an order for a small number of ships may entail the acquisition of a significant number of weapons systems for them, which also have a fairly high cost. 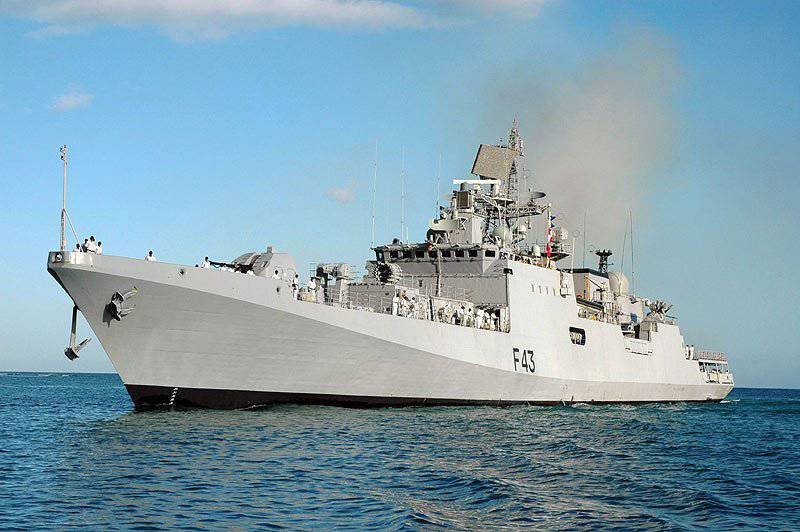 Hereinafter, data from a study conducted by the publication of the Military-Industrial Courier are used. Ships of this class are the most popular in the world market. Over the past 30 years, 214 frigates have been sold (more than 1 / 3 of all surface ships and submarines sold). This is attributed to the following factors: squadron destroyers of the previous series (for example, the British Navy 22 type), which are actively sold to developing countries, completing service in their Navy; frigates have significant combat potential at a relatively low cost. They can be acquired and maintained by countries with limited financial capabilities.

In this segment, frigates that are sold from the naval forces of leading countries are quite competitive. From 1981 to 2011, their year was sold to 95, which is 45% of the total number of frigates sold. First of all, these were the American frigates Oliver H. Perry, which in their capabilities are inferior to all modern frigates, but are successfully sold, thanks to the support of the US government.

You can also note the fact that the number of frigates built under license (65 units), more than frigates built at shipyards in the countries-sellers (54 units). Over the past 30 years, the share of surface ships of joint construction has increased.

Frigates with a displacement of no more than 3000 tons can be attributed to "oversized corvettes." By their combat capabilities and price, they differ insignificantly from them. At the same time, a relatively large number of realized ships suggests that many developing states tend to have higher-class warships for a relatively small price increase. However, the share of such ships is decreasing today, mainly due to an increase in sales of frigates with a displacement of 3500 – 4000 tons. 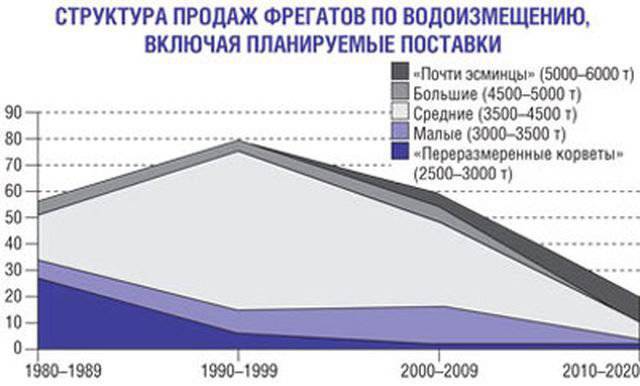 Small frigates (3000-3500 tons) are less prevalent. This can be explained by the fact that according to the cost-effectiveness criterion, these ships are worse than frigates of greater displacement. With an armament complex that is only slightly superior to that of a corvette, such ships require a crew and power plant almost the same as for full frigates (3500-4000 tons). Therefore, such ships are claimed by only a small number of countries.

The most numerous group are the average frigates with a displacement of 3500-4000 tons, which in their armament almost correspond to the squadron destroyers, yielding to them in quantitative indicators (the number of antenna posts, ammunition). Such ships are able to perform the main tasks of multi-purpose ships (attack, anti-aircraft, anti-submarine, support for the landing) with good efficiency.

A further increase in displacement (to 5000 tons) does not lead to a significant increase in combat capabilities, accompanied by an increase in price. Frigates of such a displacement are not popular, since the cost of a single ship is already substantial for developing countries. During the period under review, 15 frigates of this group were sold.

Frigates of greater displacement (more than 5 000 tons) can be attributed to "reduced destroyers" in combat characteristics and price, they come close to them. This group of frigates tends to increase displacement, which leads to the border crossing in 6000 tons and their construction as small squadron destroyers. The growth of sales of such frigates is due to the fact that European countries are actively building such vessels for the needs of their naval forces and offer them for export.

Despite the relatively low cost of corvettes laid significantly less than the frigates. This is due to the presence on the market of a large number of frigates that are being withdrawn from the naval forces of the leading states. At the same cost, these ships have better seaworthiness, similar combat capabilities and great military-political weight. From 1980 to 2011, the 153 Corvette has been sold worldwide. Unlike frigates in this class there are almost no sales of ships from the Navy (total 12 units). This is partly due to the small number of ships of this displacement in the fleets of leading countries. 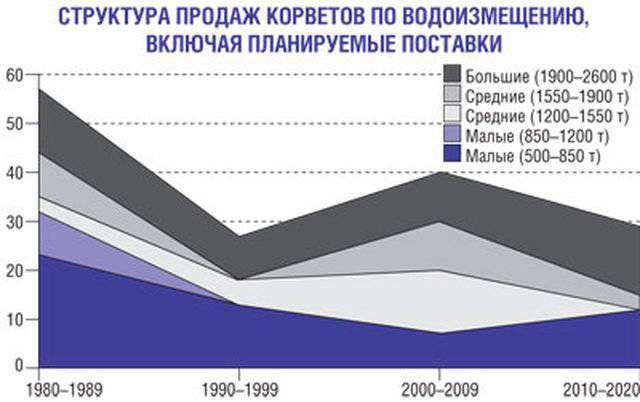 At the same time, a significant number of ships in the range up to 850 tons is due to their low price. With the observed tendency to reduce the size of weapons of displacement in 500-850 tons is already enough to accommodate on the ship attack and anti-aircraft weapons, and sometimes even anti-submarine. For this reason, in the role of a multi-purpose ship in the near-sea zone, developing countries often choose corvettes with a displacement of up to 850 tons. During the period under review, 55 units were sold - more than 1 / 3 of the total number of corvettes exported.

The increase in the number of sold corvettes with a displacement of more than 1500 tons is due to the fact that today they can fully accommodate a helicopter, its presence is already generally accepted. At the same time, the market for ships of this type is the most dynamic. Its feature is the acquisition of ships in relatively large series, which is associated with the desire of customers to reduce the cost of their operation and the multiplicity of ships. The most promising are considered to be corvettes of displacement from 1000 to 2500 tons, with the ability to configure the project based on the wishes of customers.

Amphibious ships, unlike other classes of ships, do not carry complex armament complexes, for this reason their development is available to many states that do not possess a developed defense industry complex. Their joint production is practiced only for the implementation of the most complex projects - universal amphibious ships. It is noted that:
- sales of small landing ships are constant, but have a low level;
- sales of medium landing ships, which were popular before the 90-s, decreased;
- sales of large amphibious vessels are growing: universal amphibious ships (UDC), amphibious assault ship docking ships (DVKD). 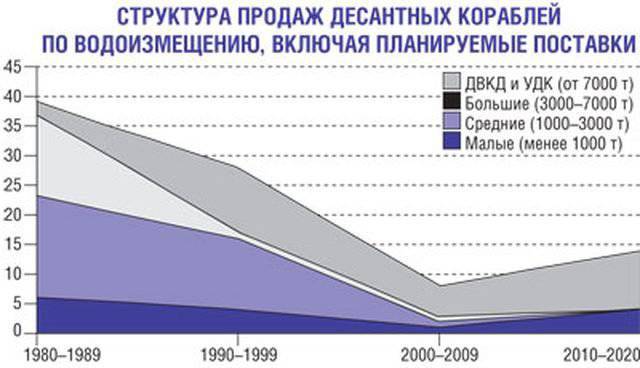 The market for the production of patrol boats is characterized by the highest competition, which is associated both with large volumes of demand and a large number of manufacturers. Also in this niche can be noted high international cooperation in equipment, mechanisms and weapons systems, as well as licensed construction at the shipyards of the customer. On this market, we can draw the following conclusions:
- patrol boats with a displacement of up to 150 tons are the most common, they account for the 2 / 3 market. While large boats with a displacement of 400-500 tons of all 4%;
- most of the boats have a speed of up to 30 nodes, over 40 nodes can develop only 10% patrol boats;
- 90% patrol boats have a cruising range of up to 2000 miles;
- Approximately 40% of boats are equipped only with machine guns or manual weapons. The most common artillery calibers are 20 and 40-mm systems.

The main trends in the development of rocket boats is to increase their seaworthiness, habitability, cruising range, simplicity and reliability in operation, as well as equipping them with effective means of lighting the surface situation. An important role begins to play the resource of the main power plant. The most common missile boats with a displacement of 200-300 tons. At the same time, 70 from 172 imported by various states of boats of this tonnage are missile boats of the 205 Ave., supplied by Russia / USSR, another 35 units are Chinese boats of the 021 Ave., which are analogous to 205 Ave. Currently, there is a decrease in demand for these products. In this situation, projects of rocket boats of lower tonnage and low cost are seen as promising. 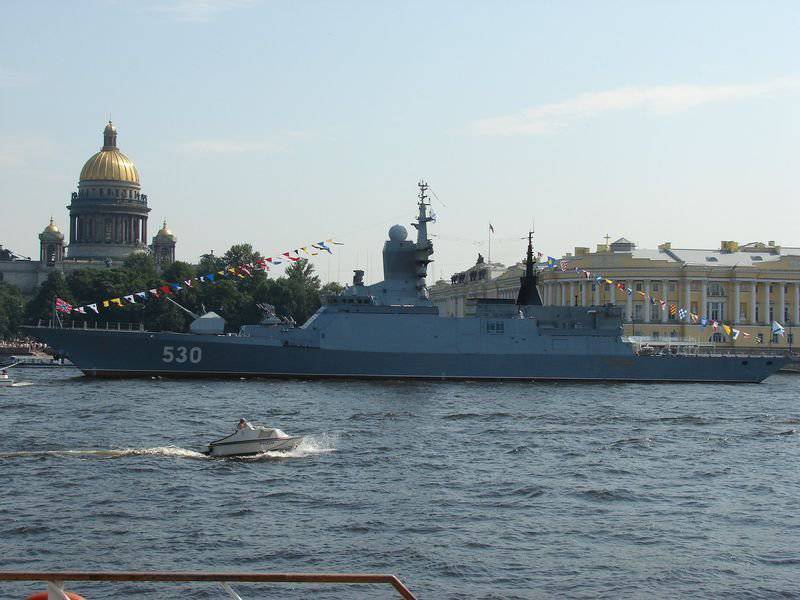 In conclusion, it can be noted that under the influence of global trends by the beginning of the twenty-first century, the requirements of customers for ships have increased. In the future, the fleet will be smaller in quantitative terms, but it will also include warships with greater combat capabilities. Evaluation of projects of warships in the international market will largely depend on the use of the latest scientific achievements and technologies: an anaerobic power plant for submarines and stealth architecture on surface ships.

Also a significant factor affecting sales will be the possibility of joint production of the ship or production under license. In the conditions of increased interest in this type of military-technical cooperation, it is worth more actively to promote the relevant options for ordering ships, taking into account the implementation and the search for joint cooperation programs with leading Western manufacturers to supply ships to third countries in order to create regional centers for repair and maintenance of Russian naval equipment in the countries -importers, cheaper counterparty purchases.

Ctrl Enter
Noticed a mistake Highlight text and press. Ctrl + Enter
We are
Projection of forceRussia maintains leading position in the global MBT market
13 comments
Information
Dear reader, to leave comments on the publication, you must to register.