Afghanistan as a playground for the drug business

April 15 2013
54
In Afghanistan, at least 80% of the total world crop of opium poppy is removed. In 2012 alone, hardworking villagers collected 3,7 million tons of raw materials for the manufacture of heroin on the Afghan fields. The main drug user coming from Afghanistan is Russia. The inhabitants of the country consume 70 tons of heroin per year, and the number of its consumers reached 1,6-1,8 million people, or 1,3% of the population. Every year, up to 100 thousands of people die from drugs in Russia. 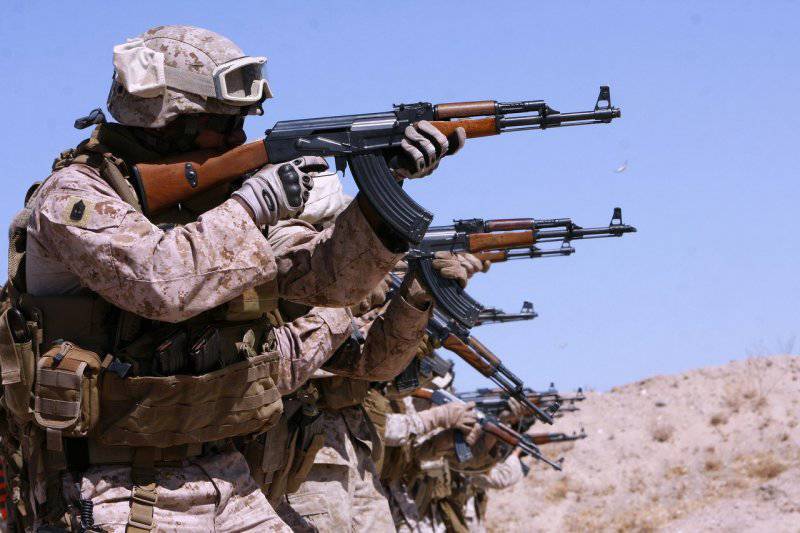 A year and a half ago, Viktor Ivanov, head of the Federal Drug Control Service of the Russian Federation summed up American activity in Afghanistan: “I would name three main results. The first is a phenomenal increase in drug production, more than 40 times, the second is the militarization of the region ... And the third result is a humanitarian catastrophe, political instability and expanded reproduction of the militants. ”

Only for 2012 a year, according to the report of the UN Office on Drugs and Crime, on the Afghan fields Was collected 3,7 million tons of opium poppy, ie, raw materials for the manufacture of heroin. And last year, the number of poppy grown somewhat decreased - no, not because of the opposition of the NATO forces, but because of the bad weather and the disease that hit the plants.

Afghan villagers significantly expanded poppy planted areas. Compared to 2011, they grew by almost 20% (from 131 thousand hectares to 154 thousand hectares). And now 80% of the total world crop of opium poppy is removed in Afghanistan. (According to estimates, which can be found in different media, not even 80, but more than 90% of the world crop).

The unprecedented pace develops in Afghanistan and the production of cannabis. According to Yury Chkalov, an expert with the Drug Control Agency under the President of Tajikistan, in 2012, Afghanistan became the world's largest manufacturer of cannabinoid drugs.

In a recent report by the US National Intelligence, signed by director James R. Clapper, says that the drug trade in Afghanistan is undermining American interests abroad; it is her trade, according to Mr. J. R. Clapper, that is destroying stability in West and North Africa and remains a significant source of income for the Taliban in Afghanistan.

For such a seemingly powerful institution as the National Intelligence Agency of the United States, such a statement seems strange. As if the boss of all intelligence agents J. R. Clapper had never heard that the ISAF contingent in Afghanistan pursues a policy of "poppy non-interference", allowing local planters to increase winter crops and spring crops, to harvest ever-increasing crops and, in fact, to shape the global market opiates.

“NATO is not responsible for the drug problem - in Russia, Afghanistan or Iran. The authorities of these countries and the relevant state structures are responsible for this, ” сообщил February 4 in Veliky Novgorod Director of the NATO Information Office in Moscow Robert Pschel. The discussion took place within the framework of the 8th Winter School of the CIRP on the theme “Partnership of Russia, the EU and NATO in the Baltic Sea Region: Developing a Strategic Approach”. Pshel noted that "he does not say that NATO is acting in this direction very well." But he added: “The problem exists. But in this regard, to conclude that NATO is responsible for the fact that this problem exists - sorry. Because our young boys and girls are risking their lives for the security of Afghanistan, and it cannot be understood that they are responsible for the drug problem. ”

Therefore, the threat problem voiced by the National Intelligence Agency of the USA exists, but the Americans will not solve it. Especially since after the withdrawal of NATO troops, the opiates will trample into Russia. It is possible that for the sake of this good purpose, the Americans close their eyes to the production of opiates in Afghanistan. After all, the threat is only a threat when directed against America. When against Russia - that is not a threat, but a good thing.

But even without that, Russia is the main consumer of drugs coming from Afghanistan. About it is known from the annual report on the world drug control situation, published by the US State Department in 2011.

The State Department directly stated: “Russia is the main destination for heroin flows from Afghanistan and an important market for traders in opium, hashish, marijuana, synthetic drugs and other dangerous prohibited substances”.

According to the UN Office on Drugs and Related Crime, cited in this report, Russians use 70 tons of heroin per year, and the number of its consumers in the country reached 1,6-1,8 a million people, or 1,3% of the population. And among them, the number of people infected with HIV reached 61% in some regions.

According to the US Department of State, a quarter of Afghan heroin enters Russia through Central Asia. The document emphasizes: “The length of the border between Russia and Kazakhstan is seven thousand kilometers, that is, exactly two times more than the length of the US-Mexican border. At the same time, the border is not too tightly guarded, and citizens of Central Asian countries bordering on Afghanistan enjoy the right of visa-free entry into Russia. ”

The main route for drug trafficking from Asia to Europe is the territory of Georgia, the report also says. The text states that drugs get to Turkey and Greece, and then to other European countries through Georgia. It is said that the Georgian authorities do not control Abkhazia and South Ossetia - and, perhaps, transportation is taking place through these former Georgian territories. According to Saakashvili, drug crime is a big problem in the country. Earlier in the media reported that the ports of Batumi, Poti and the city of Kobuleti - one of the key points of trafficking in Afghan heroin. About seven tons of heroin a year pass through Georgia to Europe and Russia.

Chairman of the Azerbaijani State Commission on Combating Illicit Drug Trafficking, Deputy Prime Minister Ali Hasanov at the last meeting in April said: “The territory of Nagorno-Karabakh occupied by Armenia is used as an uncontrolled territory for the cultivation, transit and sale of drugs, transnational crime.”

CSTO Secretary General Nikolai Bordyuzha talks about the negative impact of Afghanistan on the Central Asian region. Among other things he notes: “... Afghanistan for us is a zone of instability. The zone of warfare. This is the territory where militant groups of some extremist organizations are located, which show their interest in the states of the Central Asian region. This is the territory through which the influence of militant Islam is exercised, and, of course, it is a global laboratory for the production of drugs. ”

As the head of the Russian Federal Drug Control Service, Viktor Ivanov, recalled, since 2001, more than one million people in the world have died from the use of Afghan heroin.

At a recent Moscow conference on the drug situation in Afghanistan, Comrade Ivanov said: “Since the beginning of the millennium, since the beginning of Operation Enduring Freedom in 2001, more than a million people have died from Afghan heroin, moreover, into transnational organized crime from heroin sales have invested over a trillion dollars. "

Earlier, Ivanov reported that every year in Russia, up to 100 thousand people die because of drugs. In June, 2012, he said that, according to the latest research conducted by the Federal Drug Control Service, drugs in Russia regularly or occasionally use 8,5 million people. At least once in a lifetime, drugs have tried 18,5 million Russian citizens.

“I propose that three key regional powers - Russia, Iran, Pakistan - develop an anti-drug strategy together with Afghanistan in the shortest possible time, which will coordinate the common actions and begin the practical elimination of planetary drug production in Afghanistan,” comrade Ivanov said at the conference.

Nikolay Malishevsky ("Fund of Strategic Culture") recalls that, according to the United Nations, the annual drug trafficking in the world exceeds 500-600 billion dollars, and the opium trade from Afghanistan is the third in the world in terms of profitability after the oil trade and weapons. Professor stories University of Wisconsin Alfred McCoy writes that just two years after the start of the CIA operation in Afghanistan, "the Afghan-Pakistan border area has become the world's largest producer of heroin." According to the historian, “US officials refused to investigate the allegations of their Afghan allies in the drug trade, because US policy on drugs in Afghanistan was subordinated to the interests of the war against Soviet influence.” In 1995, the head of the CIA’s operations in Afghanistan, Charles Kogan, acknowledged that at one time the CIA “sacrificed” the war against drugs in order to achieve victory in the Cold War.

N. Malishevsky writes that in the course of the last 12 year of the “counter-terrorist operation” the Americans and the British did not destroy a single heroin laboratory in Afghanistan.

“On the contrary, within a few months after the start of the operation in the provinces of Nangarhar, Khost, Paktia, Helmand, Kunar, Balkh, and Kunduz, centers were located for the processing of extracted opium into morphine and heroin. A banking network of credit for future opium poppy crops was launched, industrial supplies of mineral fertilizers and precursors (ingredients for the manufacture of heroin) from chemical plants in Pakistan were organized. ”

The drug mafia in Afghanistan, the analyst points out, with the help of Western colleagues mastered a new type of satellite communications, ensuring maximum secrecy of the preparatory part of the operations for the transfer of drugs across the borders of the CIS republics.

The revenues of the Afghan "macorob" exceed 3 billion dollars a year (10-15% of Afghanistan's GDP). Opium poppy crop area in Afghanistan surpasses the area of ​​coca plantations in Colombia, Peru and Bolivia, taken together.

At the end of 2014, of course, the Americans will not leave Afghanistan. The contingent left there under a suitable democratic signboard will look after the ripening crop. Heroin must continue to flow into Russia.

Observed and translated by Oleg Chuvakin
- especially for topwar.ru
Ctrl Enter
Noticed a mistake Highlight text and press. Ctrl + Enter
We are
Afghan triumph of the American drug businessCountry of flowering poppies
54 comments
Information
Dear reader, to leave comments on the publication, you must to register.