Roman Lesnevsky: Turkish march at the southern borders of Russia 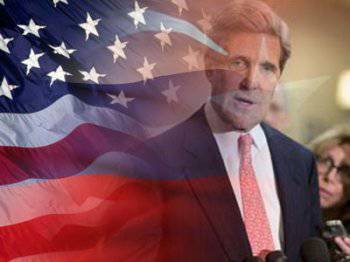 The Middle East Shuttle Visit by Secretary of State John Kerry is another update of American foreign policy and its withdrawal from stagnation in this region. During a stop in Ankara, the US Secretary of State discussed the situation in the South Caucasus, which is in the zone of Russia's natural interests.


A few days before John Kerry arrived in Turkey, on April 3, the inauguration of the air traffic between the capital of Armenia, Yerevan and Van, located in the northeastern province of Turkey, was to take place. Official Ankara stated that it had nothing to do with it. The scant reports indicated that the negotiations on the opening of the Yerevan-Van-Yerevan flight were held between the Turkish and Armenian representatives of the business community under the auspices of the USAID, representing the interests of the US administration.

Despite the freezing of the ratification of the Turkish-Armenian protocols signed in 2009 by Ankara and Yerevan, Western donors provide financial and organizational support for the implementation of the provisions of these protocols. With the participation of a consortium of Turkish-Armenian NGOs, USAID is implementing the "SATR" project - "Support to the Armenia-Turkey Rapprochement" ("Support for the Armenian-Turkish Rapprochement"). More than 75% funding initiatives in this project come from the US and Europe. For example, this year USAID will provide a grant line in the amount of $ 1 million for the implementation of integration projects. The budget of the well-known and authoritative non-governmental organization of the Foundation for Social and Economic Research in Turkey ("TESEV"), which is a bridge between Turkish experts and political circles in the country, is formed participation of the Open Society Institute (Soros Foundation), as well as grants from World Bank, the Freedom House, the European Institute, the United Nations Development Program, the National Endowment for Democracy. The European Institute works closely with the European Commission, the European Union and the European Parliament, as well as with the administration and the US Congress.

The head of the TESEV Foundation, Ken Packer (Dr. Can Paker), is the special representative of the government and the Ministry of Foreign Affairs of Turkey at the Turkey-EU talks. He is a member of the board of the Istanbul consulting group "EuroHorizons", the management team of which consists of former and current European figures, former journalists of European publications, employees of research centers. EuroHorizons has a direct or indirect link with the Turkish political elite, lobbies European institutions and politicians in Turkey, and ensures their influence on the foreign and domestic policies of the Turkish government.

All these facts point to a large-scale regional action in the zone of Russian interests under the financial accompaniment of the USA and Europe.

Turkey, having assumed the functions of a local operator, NATO and the United States, in accordance with the position of the patrons, advocates the immediate withdrawal of the Syrian President from the political arena, Russia warns opponents against interfering in intra-Syrian affairs.

Along the way, Turkey, together with the West, is aggressively pushing the agenda for turning the South Caucasus and Central Asia into a transit corridor bypassing Russia.

If the Armenian-Turkish "marriage of convenience" takes place, then Armenia will gradually enter the orbit of those who are trying to oust Moscow from the zone of Russian interests - the South Caucasus and Central Asia.

For Yerevan, the game of rapprochement with Turkey seems to be a win-win, because it has the opportunity to speculate with the interests of Russia and Turkey. And the ongoing “Syrian Democratic Revolution” 2 year strengthens the intrigue in the region.

The Kremlin is not jealous of the prospect of an Armenian-Turkish rapprochement, or this jealousy hides well. The Russian military base near Turkey and the possession of some assets of the Armenian economy, apparently, give confidence to the Kremlin that Yerevan will not go far. Or in Moscow they are convinced that in the short term, there will be no Armenian-Turkish marriage.

However, the thoroughness and consistency of the West in solving problems of any complexity should not be underestimated. Take, at least, a rudimentary project, in which, by the way, there is no Russia - the Black Sea Silk Road (Black Sea Silk Road), in which Turkey, Armenia, Georgia and Greece participate. The project is funded by the European Union and USAID. The composition of the participants and their geography allow the West to quickly increase this seemingly "fluffy" project with geopolitical muscles if they wish.

According to Western experts, before 2015, important events are expected in the relations of Turkey and Armenia, which ultimately should lead to the normalization of relations. On the other hand, it is not known whether the Assad government will stand in Syria. If pro-American groups come to power in Damascus, a strategic breach will arise for Russia in the area south of the North Caucasus. So, with the development of events undesirable for Moscow on the path of a geopolitical draft from the Syrian crater, there may not be a reliable valve, up to the Greater Caucasus Mountains. And then the issue of maintaining stability in the North Caucasus will be on the agenda.

Last year, Moscow banned activities on its territory by USAID and severely restricted the activity of the National Democratic Institute (NDI), headed by former US Secretary of State Madeleine Albright, due to the interference of these structures in the political processes in the country. As a result, NDI was forced to significantly limit its presence in Russia.

After the recent steps of Moscow, these players have obvious problems with excess adrenaline and bile. In this scenario, Western grandmasters are likely to try to squeeze the most out of the position and pieces on the political chessboard.