Terrorist attack in the heart of Damascus 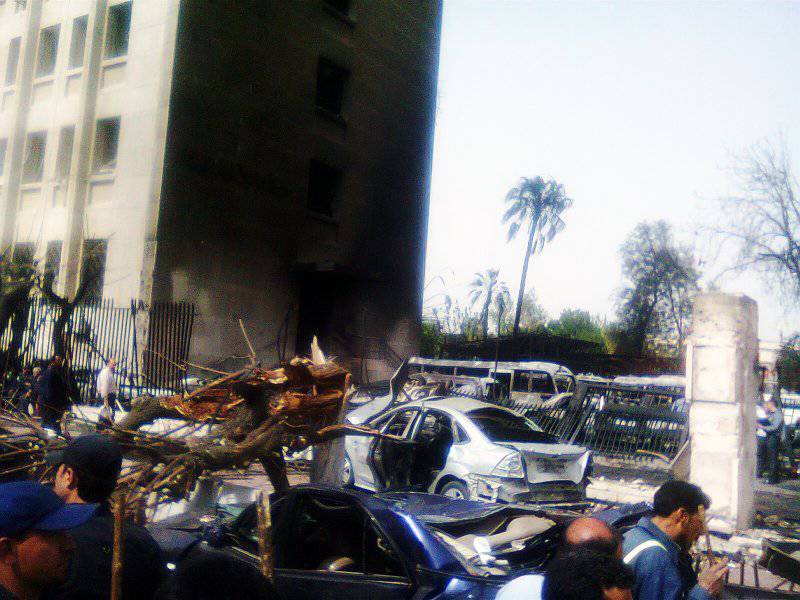 The name of the Saba Bahrat Square, located in the heart of Damascus, is translated as “Seven Rivers”. And, although there are no rivers, but seven busy streets emanate from this square. This is one of the most populous districts of the capital.

On the square is a huge white Central Bank building with a beautiful fountain near it. Right behind the Central Bank is another building in which several economic departments of the country are located. And in front of this building are residential buildings, the Salim Bukhari school for girls, the 15 old mosque of the century - one of the oldest in Damascus.

And in the 8 area of ​​April, a powerful explosion rocked the 25 minutes later in the afternoon. 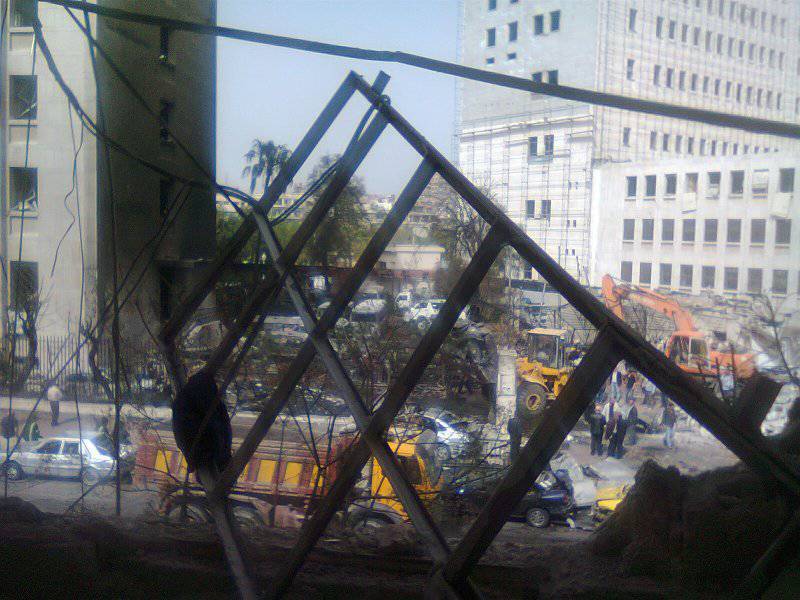 At the Central Bank, the windows were shaken, but the main blow fell on the building located near it. And also - in residential buildings across the street. As usual, numerous cars drove along the street and there were many passersby. Now, after the barbaric atrocities committed by Western-backed terrorists, some of these ordinary people will never again pass through the familiar streets of the southern city.

The attack was carried out using a car bomb driven by a suicide bomber. The usual tactics of al-Qaidovtsev ... 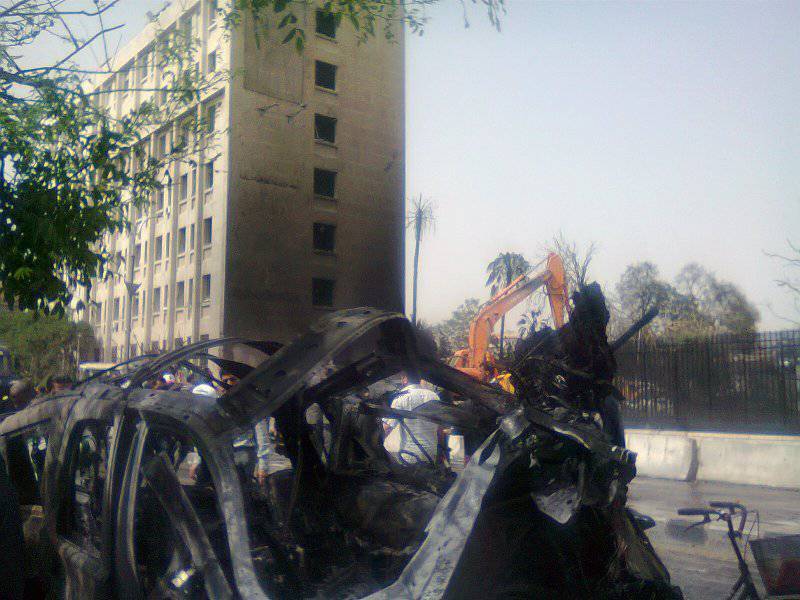 The death toll immediately - 10 people, but then the number of victims increased to 25. Hundreds of wounded. They are employees of economic institutions, passers-by, and residents of houses. Among the victims and victims are schoolgirl girls.

In the wall of the mosque - a monument of antiquity representing historical value - an explosion made a huge hole, distorted furniture and interior. A lot of damaged cars. 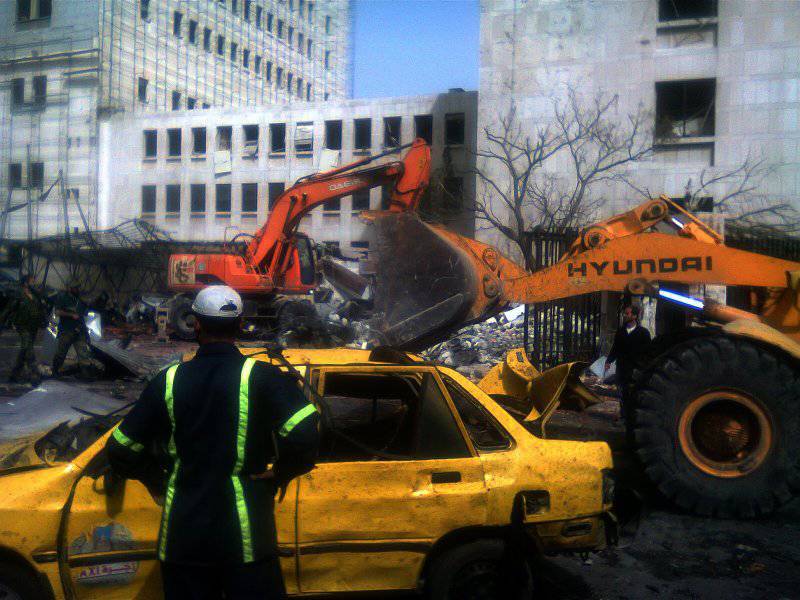 I went up to the site of the explosion - the first thing I see is a yellow taxi, covered in blood ... His driver and passengers are no longer alive. Some of the cars are no longer recoverable and will no longer pass through the city. Eyewitnesses said that after the explosion and the fire that broke out as a result of it, the fuel tanks of those cars that were parked nearby or simply passed by, detonated, and their owners did not have time to escape. 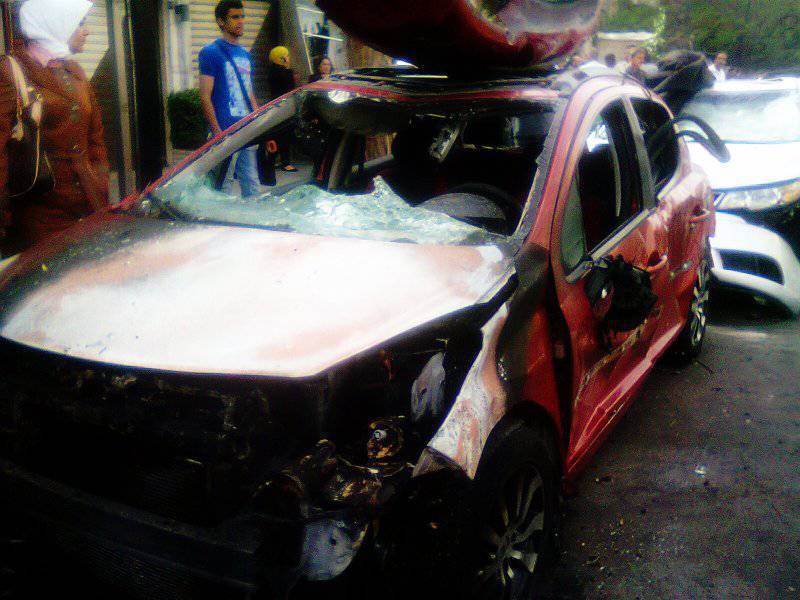 Strongly inherited and residential buildings. Two houses were badly damaged, a few more were damaged. Glass pobybiliv in houses located half a kilometer. 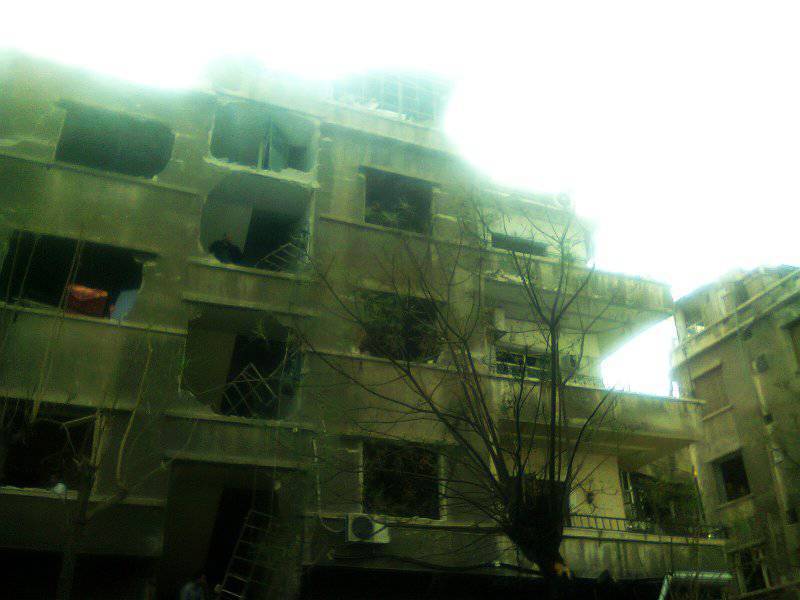 On the steps of a dwelling house - fragments of broken glass and blood. 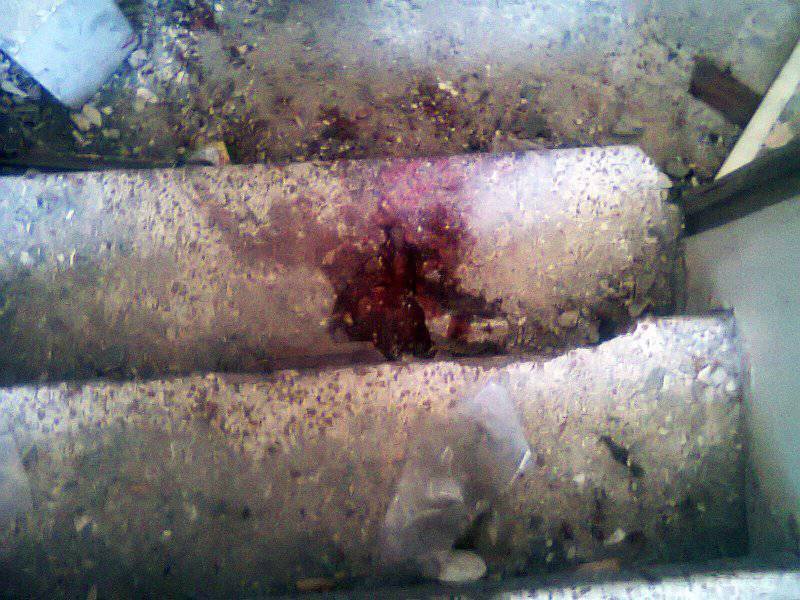 In the affected apartments - the ruined life of people who lived peacefully. 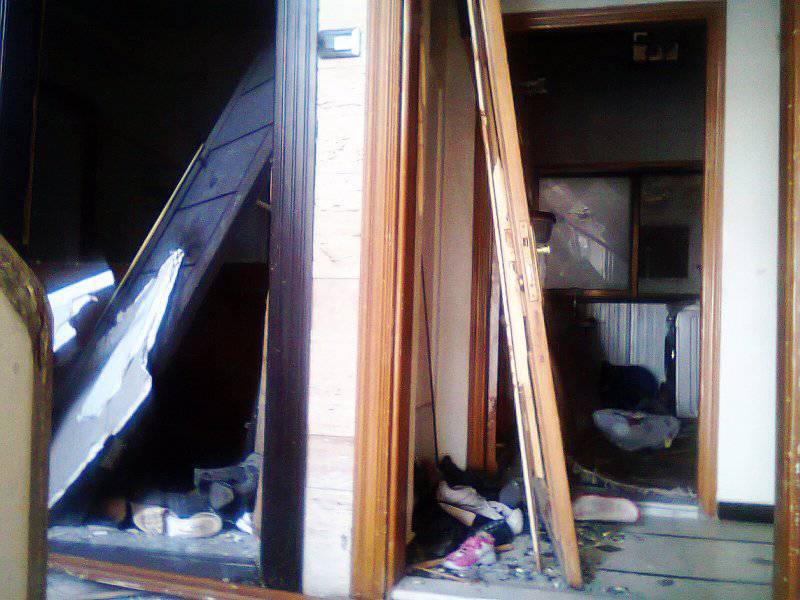 It is terrible to see among the wreckage - shoes that perhaps no one else will wear. Pink women's slipper ... what happened to her owner after this hell? 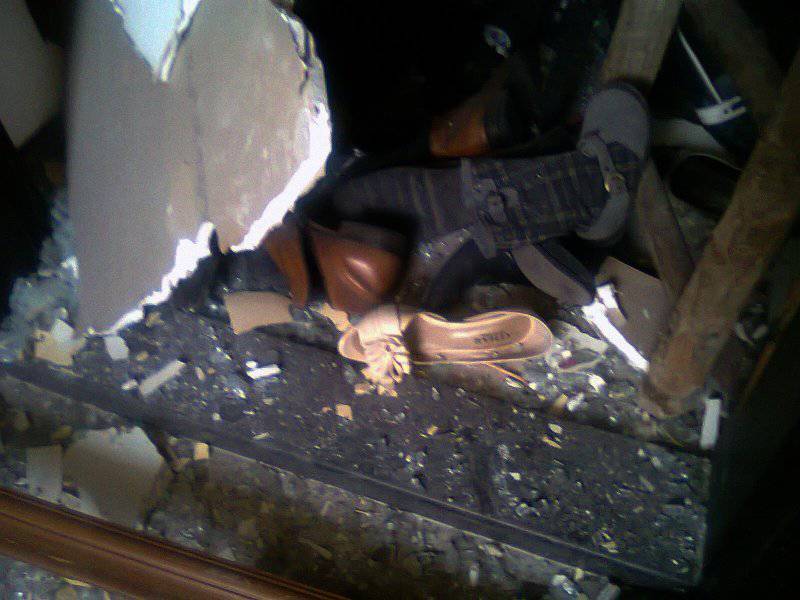 Suffered and many shops. Their owners, sighing, collected the surviving goods. The pharmacy, torn apart by the explosion, is as if puzzled too: “For what?” 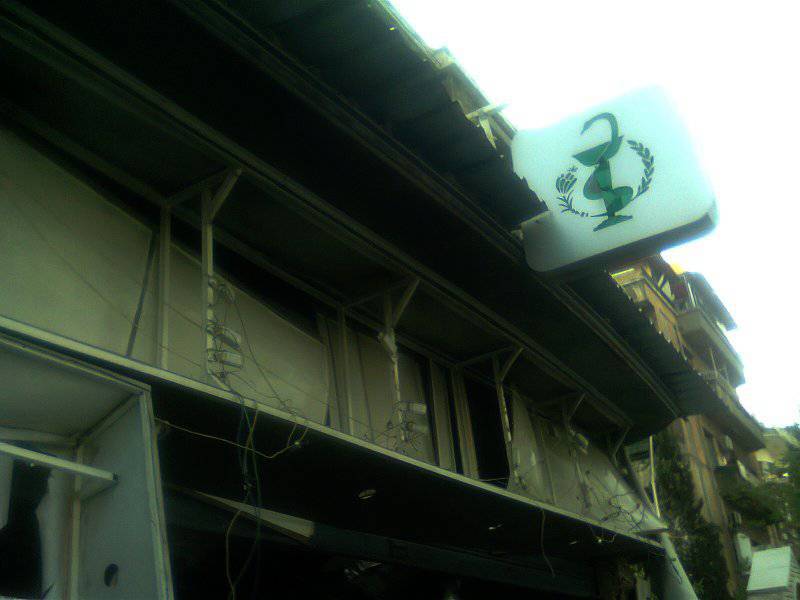 The bus stop is destroyed and completely broken. What happened to those who waited on her bus or a minibus to go about their business?

Rescuers work quickly. The builders immediately began to clean up the area. 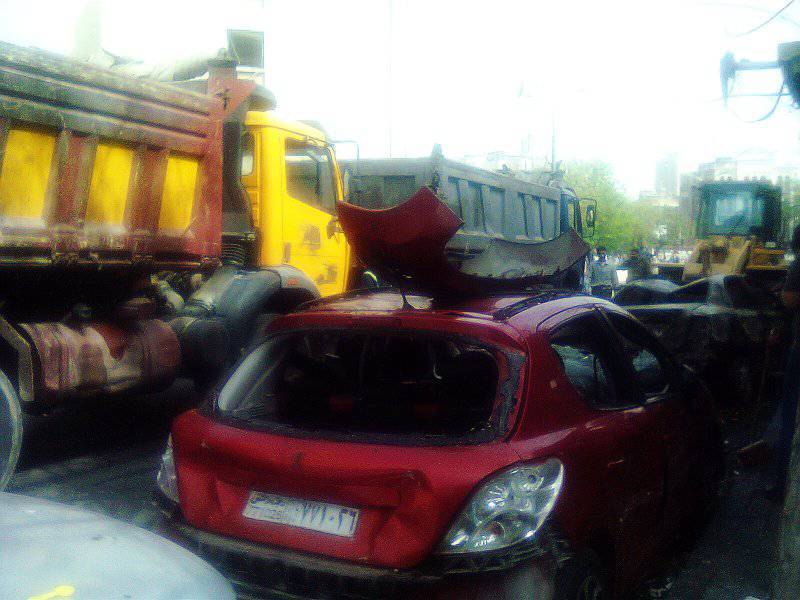 The head of government, Vail Al Khalki, and several ministers of the Syrian government arrived at the scene of the explosion. Volunteers of youth organizations came next to clear the site of the terrorist attack and heal the wounds of the city ...

I stand among the ruins, and one and the same thought arises: here would be those who speak of "peaceful rebels" fighting for "freedom." This would be those who supply weapon terrorists and their support inspire them to carry out more and more explosions. These would be those who mourn Margaret Thatcher, but who does not shed a single tear about people killed and wounded in their homes, about those who survived, but lost loved ones, about those left without shelter, because his apartment, together with all property acquired over the years, turned into a pile of ruins.

The barbaric terrorist attack committed in the very heart of the Syrian capital was condemned by many political parties and movements of the UAR. The Syrian Foreign Ministry sent a letter to the UN Security Council, which tells about the circumstances of the incident and contains the requirement to bring to justice the parties that support the terrorists.

At the official level, the crime was condemned by Russia and Iran. Iranian Foreign Ministry spokesman Ramin Mehmanparast said that the main blame for the incident lies with the countries supporting and financing gangs in Syria. He stressed that the Syrian people resolutely reject interference in their affairs, and this attack is a confirmation of the failure of plans to carry out such intervention in order to destroy the country.

It remains to add that on the eve of the explosion, the Syrian army achieved major successes in the province of Damascus. She managed to surround the East Guta area, where counterterrorism operations continue. In response to the successes of the Army, terrorists commit crimes against innocent civilians. Who else to take revenge if the Army is stronger than them? But their impotent rage speaks only about one thing - the defeat of terrorists is inevitable!