April 11 2013
29
Approved as a memo on the use of a German combat vehicle - medium tank T-III, designed for the rank-and-file and commanding staff of all the combat arms of the Red Army and allowances for partisans and sabotage units operating in the territory occupied by the enemy. This document has been prepared for the preparation and publication of a manual on the use of captured tanks after they were captured by Red Army fighters.

Warrior of the Red Army!

In the battles for the freedom and independence of our Motherland, the fighters and commanders of the Red Army capture various types of military equipment of fascist Germany and its allies. Despite the unfamiliar design, in some parts of the Red Army, tankers are able to deal with enemy technology and successfully use it in battles with the German fascist troops. However, in many compounds, due attention is not paid to the study of enemy technology, which is unacceptable.

Every fighter of the Red Army should know all the features weapons and military equipment of the enemy, to skillfully apply in the protection of our country - the Union of Soviet Socialist Republics.

The German medium tank T-III is the most advanced type of tank of the German fascist army. It has the following distinctive features:

1. High speed on and off the roads.

3. Simple and reliable engine that can consume gasoline. However, for better results, you need to use aviation gas or other first-grade gasoline.

4. The small size of the artillery shot and the possibility of firing an electric discharge device, which significantly increases the speed and accuracy of shooting.

6. Good observational devices that provide all-round visibility from a tank.

8. Ease of use by unprepared staff. 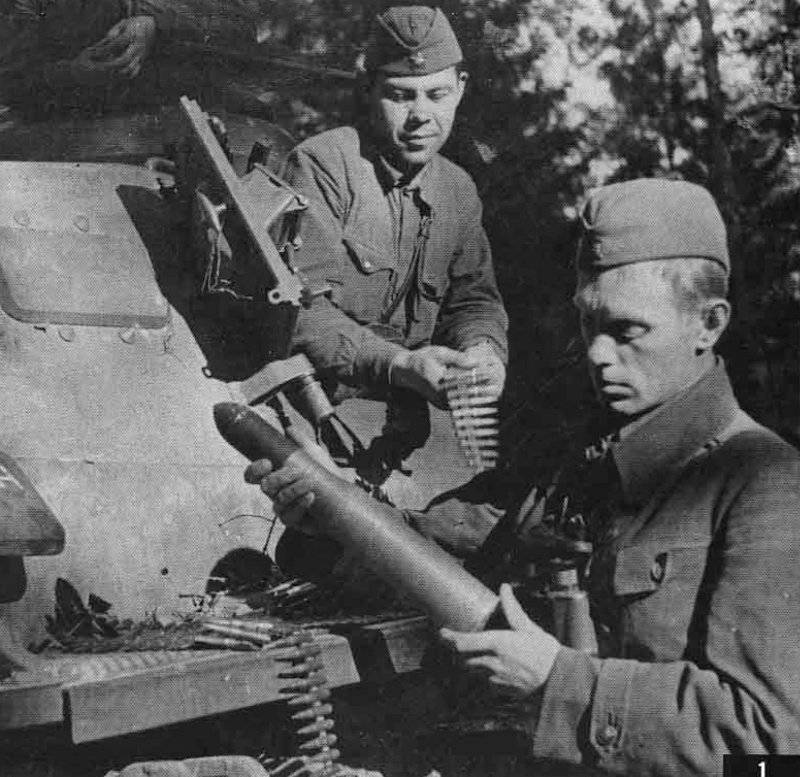 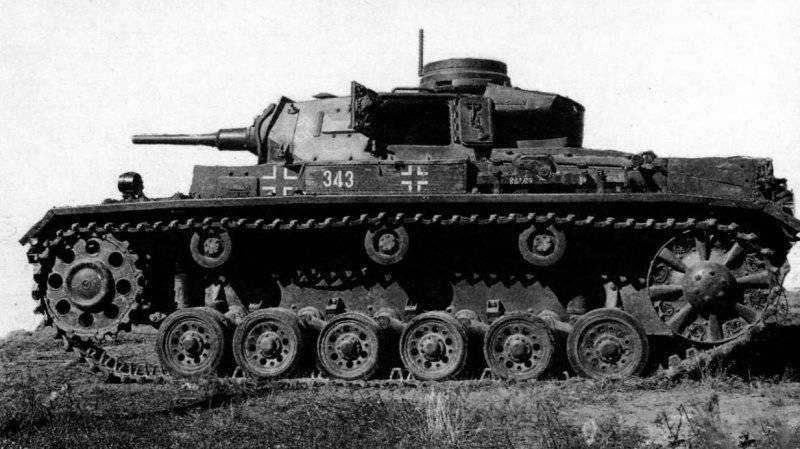 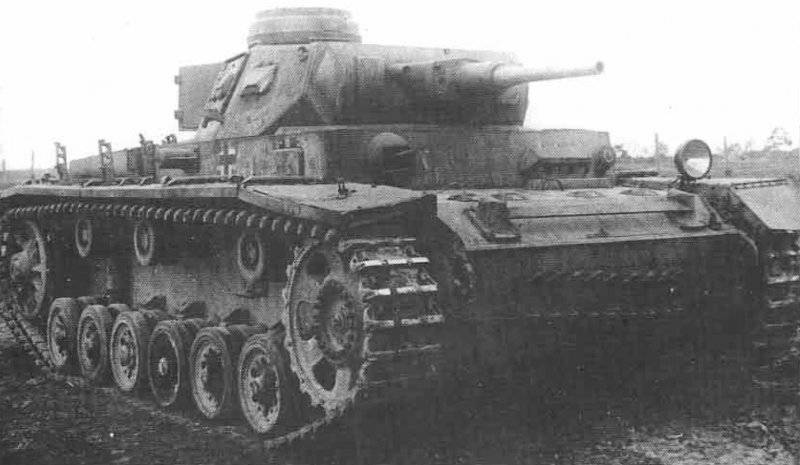 Currently, the T-III tank has a weapon made of 50-mm tank gun, according to its main characteristics it is slightly higher than the domestic 45-mm tank gun mod. 1938 g., Which significantly increases its combat capabilities compared with a tank of the specified type of previous releases with armament of 37-mm tank gun tanks.

In addition, many T-III tanks with an 50-mm cannon have an increased thickness of the frontal armor of the under-turret box and turret (up to 52-55 mm), which makes them impenetrable for the 45-mm anti-tank cannon anti-tank 400 m. tanks are usually equipped with equipment for overcoming deep fords and water barriers to a depth of 5 m. The mass of such tanks is 22-22,5 t.

All known cases of the use of captured medium tanks T-III in the units of the Red Army confirm the high combat characteristics of this type of tank.

The good armor protection of the medium T-III tank, the high smoothness of its course, the large number and high quality of observation devices, makes it possible to recommend the use of this type of tank especially as a vehicle for the commander of a tank unit or tank for reconnaissance of the close rear of the German fascist troops. 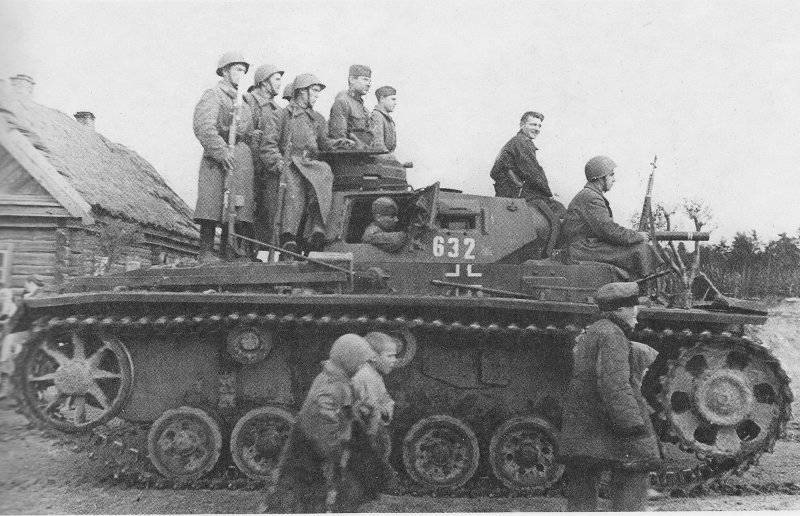 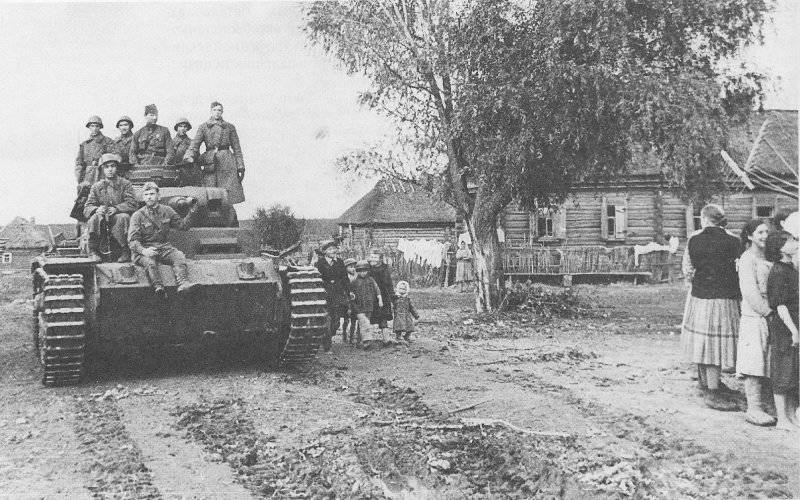 PzKpfw lII Ausf J as the vehicle for the commander of the T-60 tank company. 1942 Winter

When conducting reconnaissance and / or sabotage operations, it is best to overcome the contact line of troops in the evening, since at this time the German trenches are mostly not fully filled and the often passing German tank does not cause much curiosity and is not checked by German infantrymen, while in the afternoon avoid much more difficult. When fighting on captured tanks in the depths of the enemy’s defense in the evening, it is not recommended to open your own lighting and fire with a machine gun, since the lighting and machine-gun fire can give the enemy the location of his tank.

The most successful are the actions of captured tanks in the enemy’s location in groups of 2 units.

Being captured during the fighting, the tank is subject to repair mostly in field conditions and with the involvement of the minimum amount of materials and equipment. The units of the tank are highly reliable and can be operated even by an unskilled driver. The T-III tank repair manual is under development.

For drivers familiar with driving trucks, tractors and tanks, we can recommend the following sequence of tank driving and driving.

To start the engine of the T-III tank you need:

1. Put in the middle position the front shift lever.

2. Open the gas stove by placing its handle in the vertical position, which is located on the engine bulkhead behind the right-hand seat.

3. Press and turn to the right in the course of the tank lever mass switch, which is located in the engine compartment and is located against the door of the engine bulkhead.

4. Drown the key in the ignition lock to failure.

5. Press the starter button while simultaneously lightly pressing the gas pedal with your foot and right-hand pressing down the start-jet nozzle knob located on the floor to the right of the driver's seat.

6. If the engine does not start from the starter, it is necessary to take the crank mounted on the right wing, open the flap in the stern (rear) part of the tank, insert the crank into the ratchet of the inertia starter and turn it counter-clockwise for about half a minute.

After that, to wind up the engine pull the cable ring located to the left of the ratchet.

To start the movement on the T-III tank you need:

1. Check the position of the brake pedal. The pedal must be in the upper (raised) state.

2. Press the clutch pedal with your left foot.

3. Without releasing the clutch pedal, put the front gear shift lever in the forward (forward) or rear (reverse) position.

4. Put the rear gear shift lever in the position corresponding to the desired gear.

To quickly stop the tank, you need to quickly press the clutch pedal and at the same time strongly push the brake pedal.

The control tank does not have any features that significantly distinguish it from the tanks of domestic production.

To rotate the tank to the right or to the left, pull the corresponding vertical turn lever towards you while simultaneously depressing the gas pedal.

To transfer the tank to the highest gear (to accelerate the movement) it is necessary to move the rear gear shift lever to the position marked by a larger number of division of the sector scale, accelerate the tank by pressing the gas pedal, and then quickly press and release the clutch pedal.

Transfer of the tank to a lower gear is similar.

Do not forget, after stopping the tank, remove the key from the ignition lock, which leads to engine jamming, and then open the ground mass lever, preventing the battery from discharging.

A tank with a 50-mm gun has the same basic control mechanisms as the 37-mm gun except for the mass switch, which is located in the engine compartment on the wall to the left along the tank.

2. Fold the projectile into the tray and push it into the breech, after which the shutter closes itself. The gun is charged.

In order to make a shot, it is necessary that the weight be turned on and the engine to work, since the shot is made by an electric discharge device.

To do this, you must perform the following steps:

1. Turn on the electric trigger switch located in front of the direction indicator.

2. Turn on the plugs into the electrical outlet plugs located on the front wall of the turret to the right and left of the gun,

3. Press the red button to the right of the gun, after which the letter “F” will appear in the window next to the button

4. Press the trigger lever, located on the handle of the handwheel horizontal guidance of the gun.

The use of a tank machine gun has no peculiarities as compared with the use of an MG-34 infantry machine gun.

If it is impossible to use a captured tank, it must necessarily be rendered unusable, since even a slightly damaged tank can be restored and used against the forces of the Red Army. 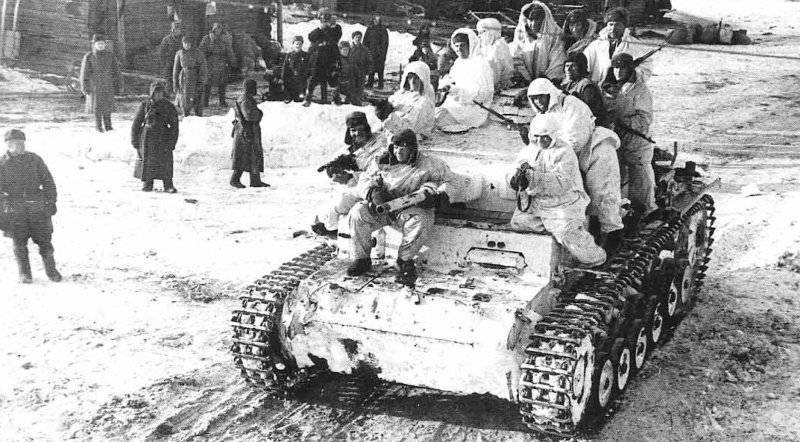 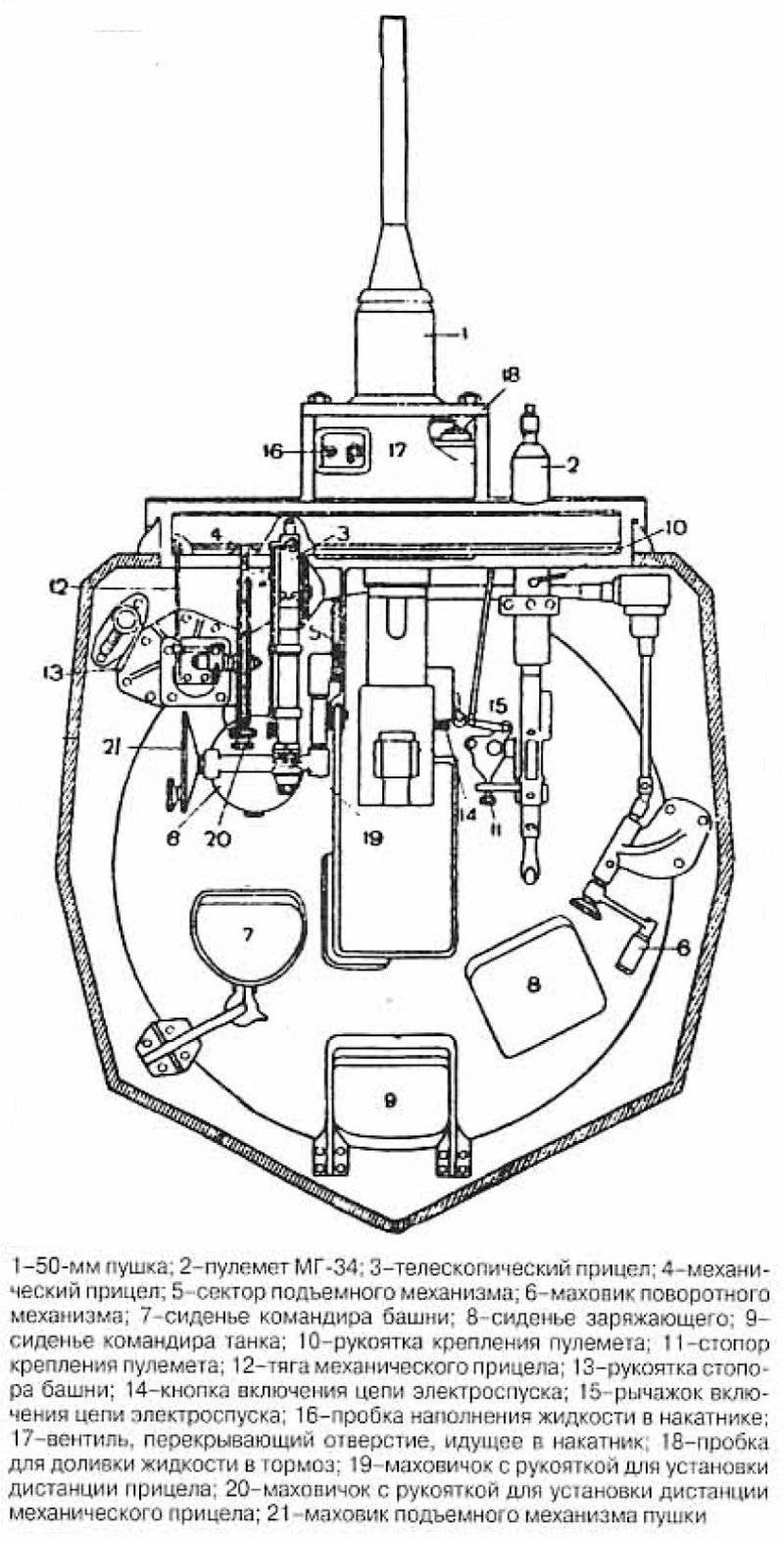 The interior of the tank tower PzKpfw III. Figure from the manual on the operation in Russian.

To do this, you must first remove the machine gun from the tank and hide it, or carry it away, for which you need to do the following:

1. Open the tank mask hatch, for which you push up the handle of the hatch lever, located in front of the right of the machine guns, and with an effort to give the lever forward to failure.

2. Turn the locking lever of the cover of the detachable casing away from you and open the casing cover.

3. Turn away the locking lever of the cape located behind the casing, and fold the cape.

4. Pull the fastening plug latch to the right, and fold the plug back.

5. Raise the machine gun for the middle part and remove it, feeding back.

Then blows a sledgehammer or scrap to destroy the engine, gearbox and the breech of the gun. Access to the engine is through the overhead hatch, and to the gearbox - through the control compartment. If the hatches are closed, open them with a large screwdriver, or crowbar. The gun can be spoiled by spilling a handful of earth into the muzzle, then firing a shot from it.

If there is fuel in the tank, the tank can be blown up, for which purpose we put on the neck of the tank soaked with gasoline, or with oil the ends, rags or straw and light them. For the complete destruction of the tank, you can reinforce the charge of the tol in 1,5-2 kg at the junction of the front and side armor plates of armor from the inside and blow it up with a fire tube or electric fuse.

But it should be remembered that the proper use of a captured tank will bring a much greater contribution to the approach of victory over the German fascist invaders.

Death to the German invaders! 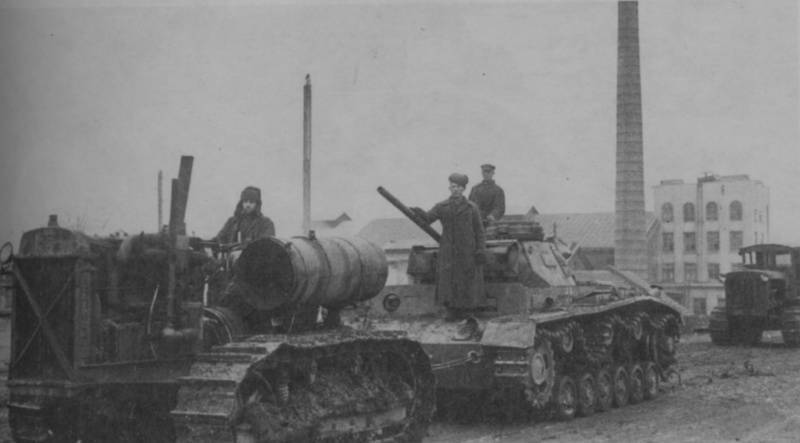 Trophy German tanks (in the frame - Pz.Kpfw. III) are being towed for repairs to plant number XXUMX in Stalingrad. 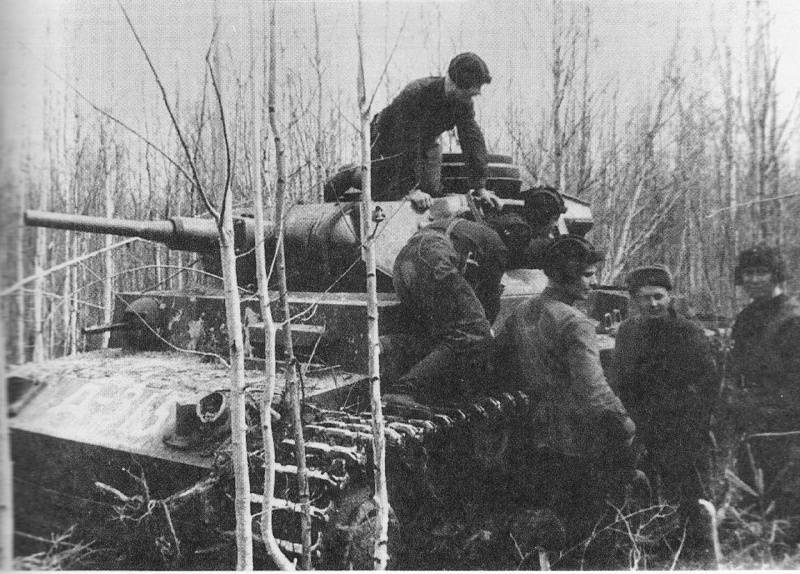 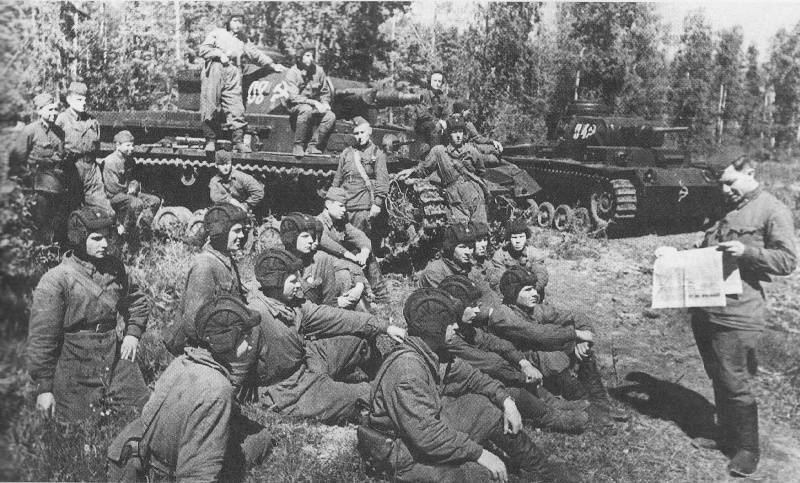 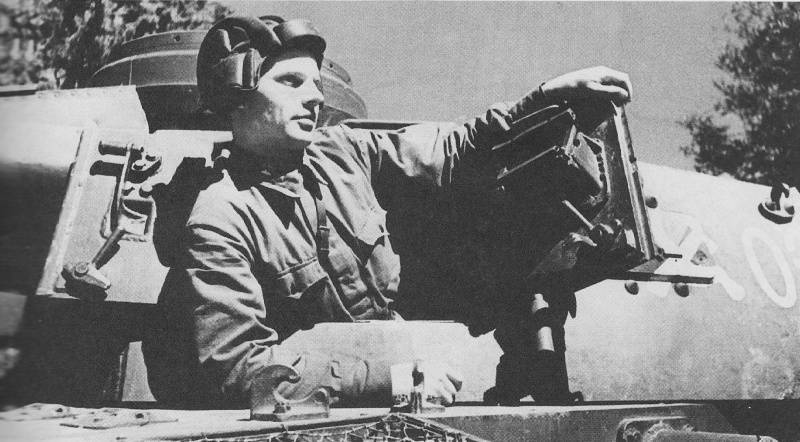 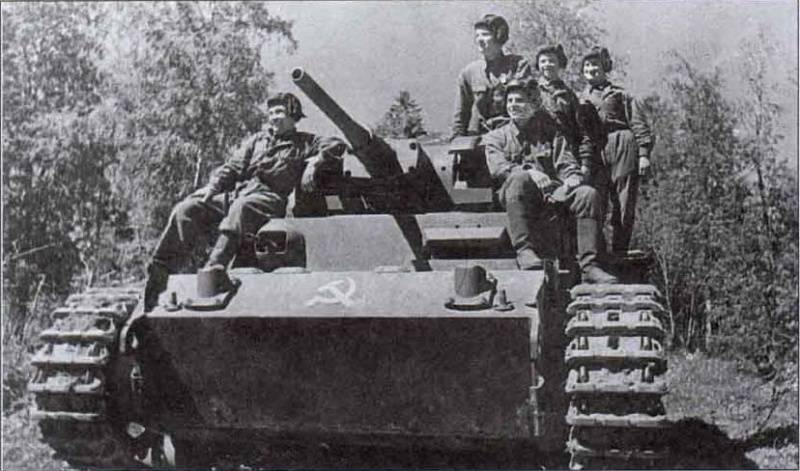 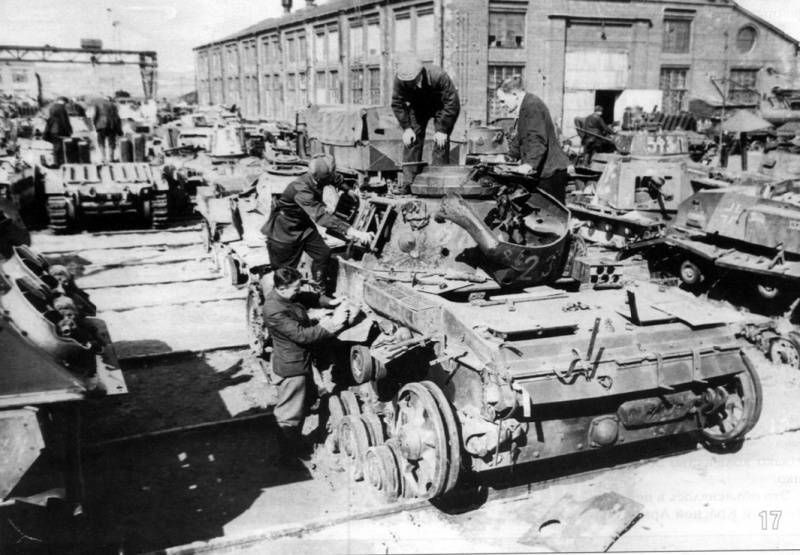 Workers of one of the factories of Moscow inspect arrived for repair tank PzKpfw III. After the repair, the tank will go into service with one of the Soviet tank divisions equipped with captured German tanks. 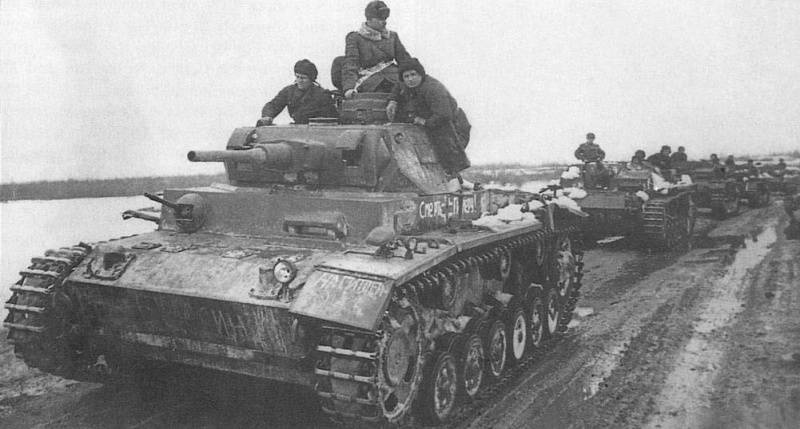 Soviet tankers on captured German armored vehicles. This is a separate company of captured tanks, Western Front, March 1942. In the foreground is the Pz.III medium tank, then - the StuG III assault guns.
Ctrl Enter
Noticed oshЫbku Highlight text and press. Ctrl + Enter
We are
Diplomats of the People's Commissariat of Defense: on the eve and during the war1941 year: Silent horror in tank forces
Military Reviewin Yandex News
Military Reviewin Google News
29 comments
Information
Dear reader, to leave comments on the publication, you must to register.