April 11 2013
29
About a week ago, an article appeared in the Syrian press under the strange name “The commander of the Al-Farouk battalion in the city of Til-Abyad declared himself a supporter of President Assad and the enemy of Dzhabhat Al-Nusra.” (Al-Farouq still stands as a fierce opponent of Assad and Hezboly in Lebanon). 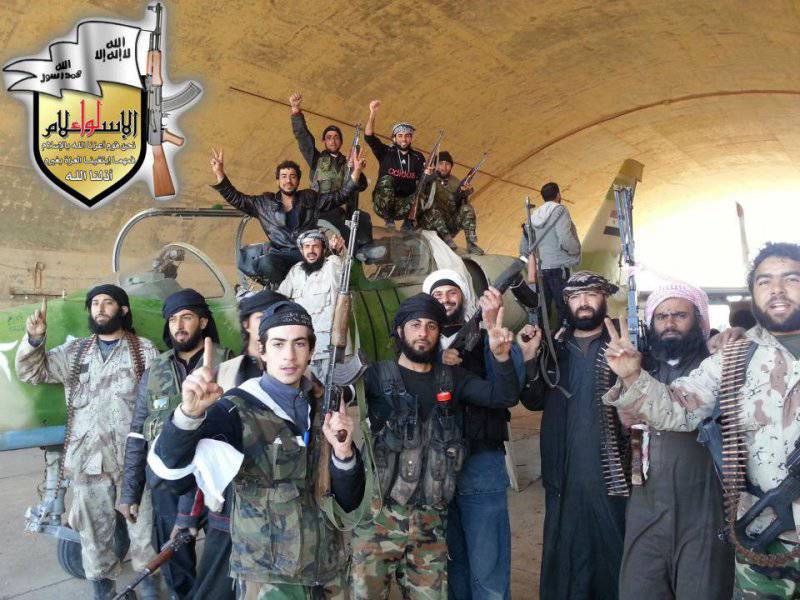 Recent publications in opposition media not only confirmed the significance of this article, but also diagnosed a fracture in the anti-Syrian camp. Suddenly, the “Jabhat An-Nusra” terrorist group “ceased” to “admit” new members to its ranks, the leader of which declared: “For the new jihadists, the“ Jabhat An-Nusra ”doors are closed”. His words came as a surprise to anyone who knew about active recruitment into the ranks of the group. At the end of March, militants in the province of Lattakia announced the formation of a Sharia committee, after which the next day rumors began to spread that a pro-government intelligence network was revealed. They were revealed by mercenaries close in ideology to Jabhat An-Nusra, who declared that the leaders of the groups operating in Latakia are those very agents.

Terrorists from “Jabhat An-Nusra”, “Al-Faruk” and other groups diligently destroy and arrest each other, at the same time blaming Jordanian, American special services and their scammers for their problems. Killed one of the most famous terrorists nicknamed "Syrian Bin Laden." Islamists are afraid of the SSA, non-Islamists are afraid of “Jabhat An-Nusra”, many Islamist leaders suddenly felt trapped, the media spread a message that a special militant group had been created to destroy “Jabhat An-Nusra”. But the terrorists declared their main enemy to be Syrian special services, which in a few weeks killed several leaders and commanders.

The anti-Syrian press published a correspondence between the heads of the aerial intelligence service and the national security of Syria. It contained data on agents deployed in coalition ranks and surveillance of coalition members in their countries of residence, as well as European meetings and gatherings that discussed the formation of a provisional government and a new constitution for post-war Syria.

On top of that, many “oppositionists” could not accept the appointment of Gassan Hitto as the head of the transitional government of the American. They demand to expand the composition of the coalition and stop the monopolization of the opposition from one political movement, probably meaning the Muslim Brotherhood. More importantly, however, the protests are also directed against the growing influence of the Jabhat Al-Nusra grouping in the opposition environment.

In order to weaken the influence of “Jabhat An-Nusra”, the “oppositionists” even demanded from the SSA to gain a foothold in the “liberated” areas, but as soon as it achieved this, “Jabhat An-Nusra” immediately settled scores with the SSA officers.

The coalition of the opposition forces of Syria and the “interim government” are simply afraid to admit that Syria will not succeed in managing the “liberated” territories until the Islamists agree to that. It was probably because of this that the process of forming the ministries of the “interim government” stretched out. Otherwise, there will simply be no place to manage. It is worth remembering that the SSA still does not recognize the “interim government”, and from the coalition it is reminded that the legitimacy of the SSA is ensured only through a coalition. The creation of Shariah councils and committees is an extra sign of mutual fear and distrust in the ranks of the militants. Everything happens not without the knowledge of the West, which recently began to admit that radical Salafis with European passports are fighting against Assad on its own territory. On the one hand, this is an excuse to get rid of their explosive material by throwing it into a Syrian bonfire, on the other hand, there is a need to somehow manage the terrorist mass that has accumulated in Syria, which does not want to deal with anyone from the coalition, the SSA and the "interim government."

That is why they all fail to take Damascus, in this case, it remains only to show their true nature: to blow up the children and gnaw at each other's throats.

Ctrl Enter
Noticed oshЫbku Highlight text and press. Ctrl + Enter
We are
Interview by President Bashar Al-Assad to the Sunday TimesThe importance of the Victory Parade in Russia is being questioned
Military Reviewin Yandex News
Military Reviewin Google News
29 comments
Information
Dear reader, to leave comments on the publication, you must to register.